Nagoya and a Museum that Spins a Good Yarn

Initially I was overwhelmed by the ultra-modern city of Nagoya. Complicated steel structures and impersonal sky scrapers everywhere. The only high-rise block that did not advertise its name in giant letters on the top was our hotel. I kept getting lost! The thought of visiting a car museum while I was there was the least appealing idea anyone had proposed on my journey through Japan. The alternative was more wanderings around the city centre. i went along with the idea and I am so glad I did as it was a day well spent. 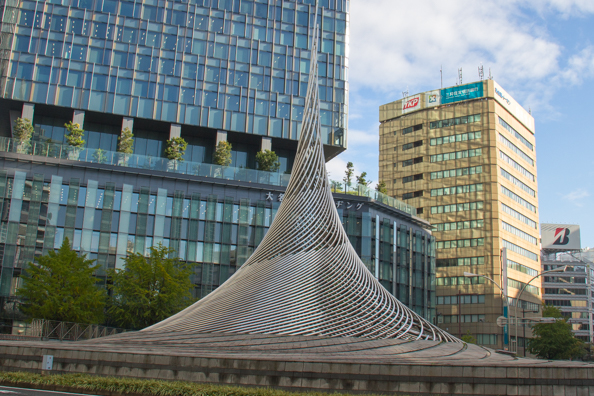 The Toyota Commemorative Museum of Industry and Technology, is one of several museums established by Toyota in and around Nagoya. It explores the history of the emergence of Toyota as a globally important company. The Toyota Automobile Museum) is a large collection of cars through the ages from all over the world. I was heading for the former, along with a large group of young Japanese businessmen. 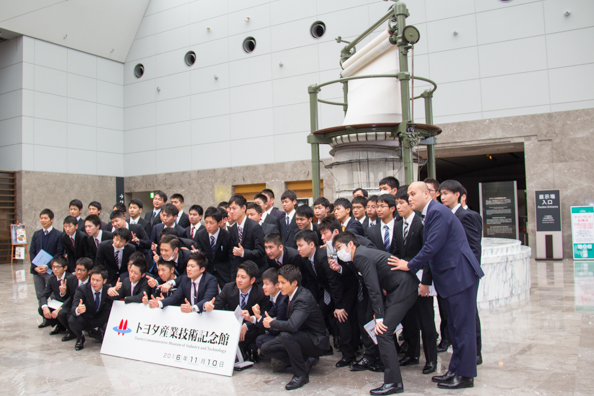 I had expected to see at least one car on display when I entered the museum but instead pride of place goes to a Circular Loom (1906). This was my first clue that Toyota had not started as a car manufacturer. Toyota was founded in 1933 as the Toyota Motor Corporation as a division of the Toyoda Automatic Loom Works. The original company was founded by Sakichi Toyoda. Toyoda was born in 1867 just as Japan was emerging as a modern nation. As a young man he realised that mechanisation was the key to success. At the same time the silk industry was rapidly expanding in the area where he lived and he developed and patented machinery for spinning and weaving this natural fibre. He invented the Circular Loom in 1906. The museum occupies the pilot factory Toyoda established in 1911 to test his inventions that used various sources of power although his experiments with steam-power soon gave way to cheaper forms of power. 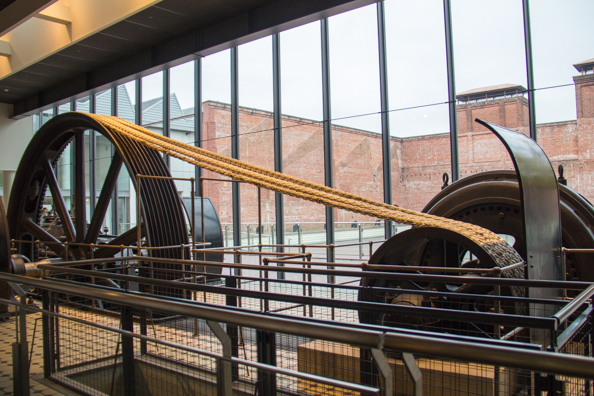 Beyond the large lobby is the Textile Machinery Pavilion. It is no wonder that this area resembles an old spinning mill as this building once housed the Toyoda Automatic Weaving Mill. This historically interesting building is perfect for this homage to the history of spinning and weaving techniques. Museum staff demonstrate the different techniques that have been used over the years, including the spinning of thread by hand. 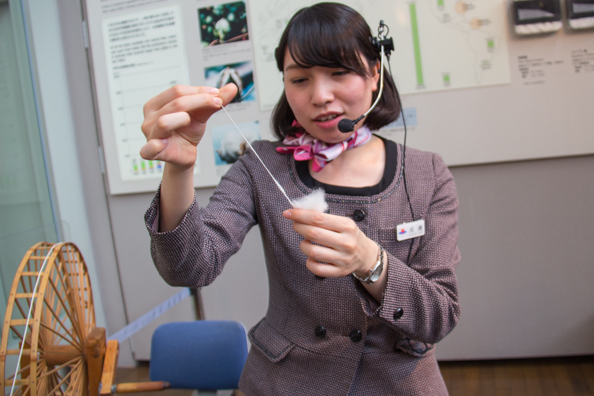 On display, and only seen here, are replicas of the Spinning Jenny, Water-frame and the Spinning Mule which were invented during the “Industrial Revolution”:“http://www.history.com/topics/industrial-revolution in England. These represent the first step from hand spinning and weaving towards mechanization. Many of the machines are still in working order and are regularly demonstrated by the museum staff. In one area several machines of the same type were collected together and when they all started up the noise was incredible and one could imagine what it must have been like in the” workhouse”:http://www.primaryhomeworkhelp.co.uk/victorians/workhouses.html. 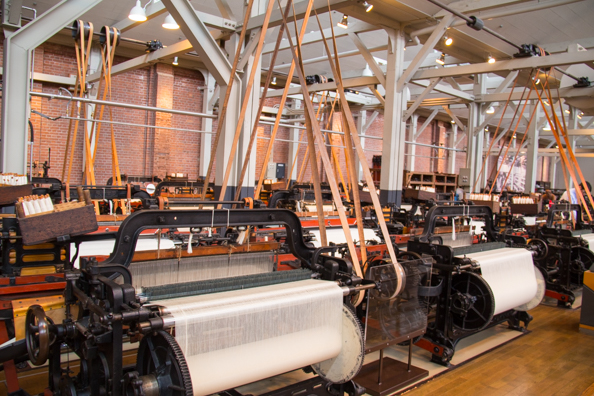 The latest step in this process of development is computerization and there were several machines representing this new technology. These machines produce fabrics with complicated patterns at the flick of a switch. I could have stayed there for hours watching the various processes taking place but there was a lot more to see so I moved on. 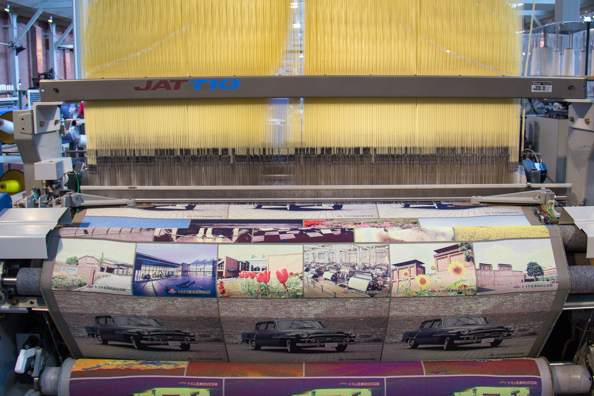 I made my way to the Automobile Pavilion. This pavilion is dedicated to the next stage of development of Toyota. In 1929 Sakichi Toyoda sold all the rights for his automatic loom and gave all the money to his son Kiichiro Toyoda to invest in automobile research. His ultimate goal had been to produce automobiles but he died the following year and his son took up the challenge. Kiichiro had graduated in mechanical engineering and he undertook most of the initial work. He began developing a small gasoline engine in a corner of the Loom Works building. He was also involved in the continuing development of new products by Loom Works. By the end of 1933 his staff produced a prototype motorcycle engine. That same year the Automobile Division of the Loom Works was established. In 1935 a prototype passenger car was produced and a few months later the first Toyoda Model G1 Truck prototype was completed. In 1936 the brand name was changed from Toyoda to Toyota by public suggestion. 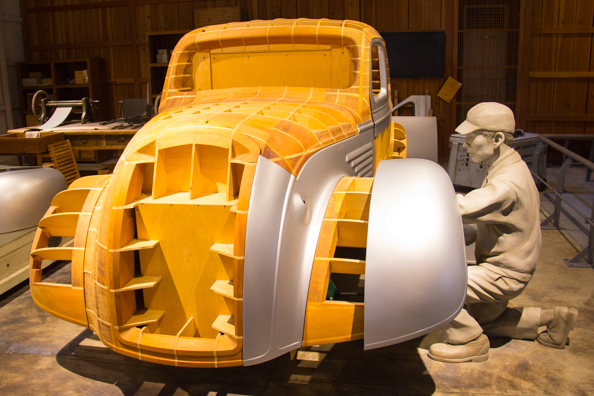 The exhibits record the ups and downs of Toyota’s struggle to succeed in the automobile industry. There are some lovely old cars on display and also different manufacturing techniques culminating in examples of robotic manufacturing. In the seventies Toyota developed the just-in-time concept which led to dramatically reduced inventory stocks worldwide. Toyota is now a global concern and its contribution to the modernisation of Japan has been recognised by the inclusion of Sakichi Toyoda in the list of top ten Japanese inventors. 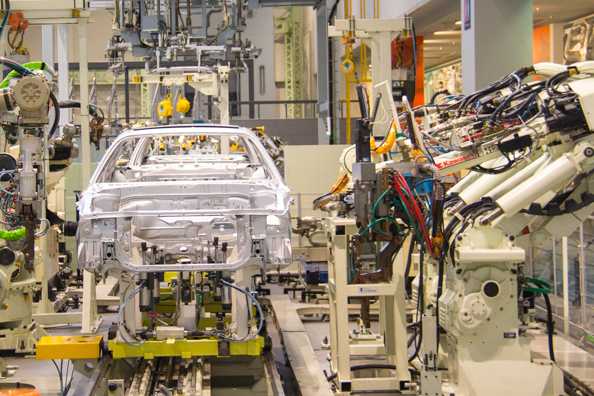 The highlight of my visit was the demonstration of a Partner Robot playing the violin. This robot was first shown at the Shanghai World Expo in 2010. It came to this museum in 2014 and does five performances a day. It is a walking robot and can play the violin just like a human with delicate fingering. It was incredible to watch it. Partner Robots are the latest Toyota project and the aim is to build robots that embody “kindness” and “intelligence” and that will be able to help with human activities in applications such as assistance, elderly care, manufacturing, and mobility in the near future. 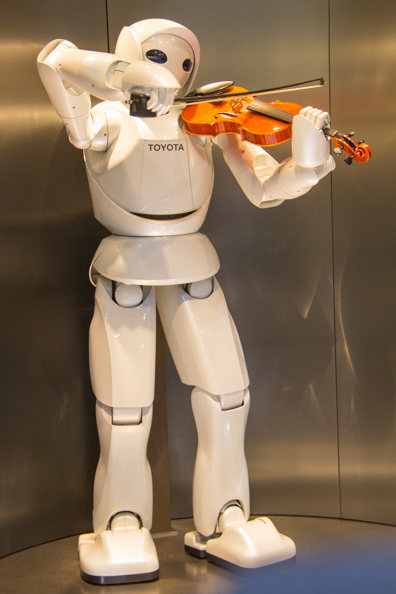 A short walk from the museum is the Noritake Garden in the grounds of headquarters of Noritake China the famous tableware producers and home to the Noritake Museum. After exploring the gardens I visited the museum. 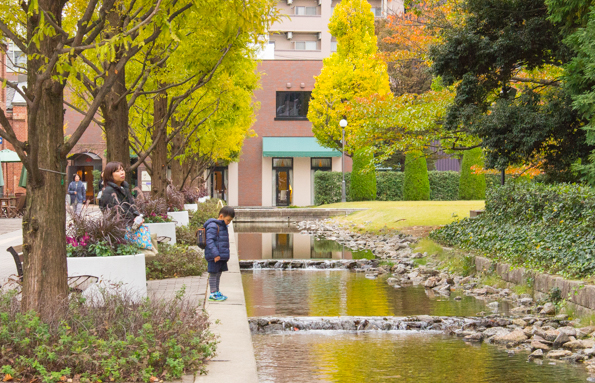 The museum has four sections, the Welcome Centre, the Craft Centre, the shop and the restaurant. I started my tour in the Welcome Centre where I learnt about the history of Noritake tableware which goes back more than one hundred years. Initially the company was established in a suburb near Nagoya in 1904. Initially its aim was to create western style dinnerware for export. It took ten years to create a porcelain dinner plate that could be exported. The earliest dinner plates were hand painted and featured a lot of gold. By the 1920s assembly lines allowing for mass production were introduced and Notitake now export high quality, affordable dinnerware worldwide. As well as the dinnerware there were some interesting pieces on display and I particularly liked the tribute to the golfer, Arnold Palmer. 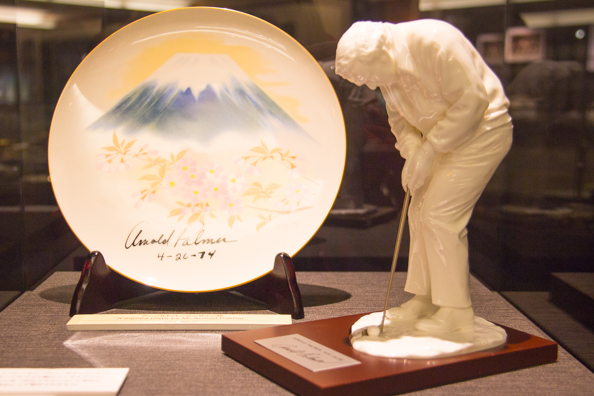