When I arrived in Piazza Martiri d’Ungheria in the Italian city of Viterbo the sun was shining. It illuminated the splendid old buildings marching along the ridge above me. All around me the landscape was spiked with domes and spires. Which way to go? I chose the middle road and headed for Piazza del Plebiscito in the centre of town. Dominating this square are two connected buildings, the Palazzo dei Priori (Town Hall) and Palazzo del Podestà. These two buildings have housed the civic authorities of the town for centuries. Some of the rooms are open to the public. These include a seventeenth-century chapel and the Sala Regia. The latter is decorated with sixteenth-century frescoes depicting myths, legends and the history of Viterbo. A small panoramic courtyard beyond the ornate arch features an elegant seventeenth century fountain and some Etruscan sarcophagus tops. This area was once the centre of the Etruscan civilisation. 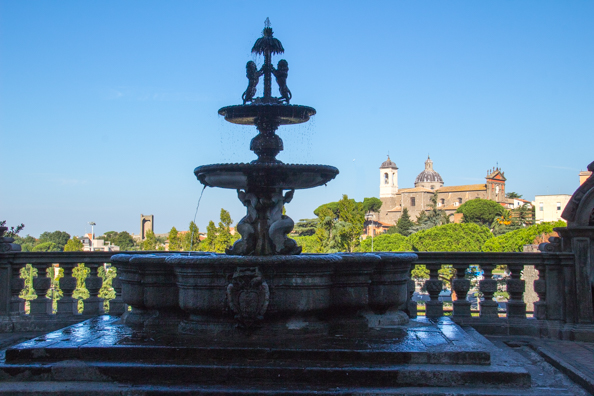 Next to Piazza del Plebiscito is Piazza delle Erbe and it was here I found another fountain, the Fountain of the Lions. This fountain, formerly known as St Stephen’s, features four lions with raised paws resting on the city’s coat of arms. The original fountain was built in 1335. It was almost completely rebuilt in 1600 and restored in 1876. Viterbo, is famous for its perfectly preserved medieval quarter where there were once ninety-nine fountains and around twenty public wash houses. This earned the town the title City of Beautiful Fountains. Medieval Viterbo relied on an aqueduct built in 1268 to supply water to the Papal Palace which was located on one of the three hills on which the town was built. An underground system of conduits distributed from there to the southern part of the city where more fountains are found. In particular the fountain del Piano in the neighbourhood of Pianoscarano. The present fountain was built to replace the original fountain that was destroyed in 1376 by the command of Pope Urbano V. This was the result of an incident that occurred involving this fountain and the papal party returning from Avignon. A local woman objected when a servant of one of the cardinals decided to wash his dog in the fountain thereby polluting the drinkable water. A fight ensued during which the woman was killed and the pope subsequently punished the locals by destroying their fountain. The present fountain of Pianoscarano was built in 1376 replacing the original one. This fountain is also decorated with lions, the symbol of Viterbo. 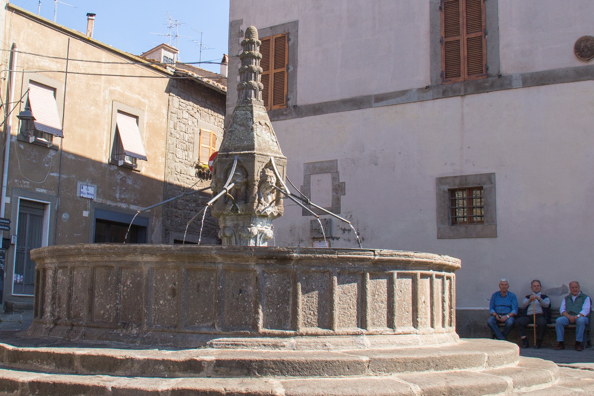 On the edge of Piazza delle Erbe is the famous Gran Caffè Schenardi housed in a fifteenth century building. During its history it has been used as an office, a warehouse and the Royal Hotel. After Raffaele Schenardi bought the hotel in 1818 and modernised the interior it’s café became popular as a meeting place to drink coffee and discuss political developments. Gran Caffè Schenardi attracted the most important people in the town and many from out of town. In 1851 it began selling meals to its customers and the premises were regularly raided to ensure they did not remain open after midnight. In 1855 the café was renovated by the Roman architect Virginio Vespignani and became one of the most beautiful historical cafes of Italy. It is still popular today and now sells delicious ice cream and tempting pastries as well as continuing the tradition of serving meals. On 31 December 1980, the Ministry of Environmental Cultural Heritage declared the Gran Caffe Schenardi of particular historical and artistic interest. I was tempted to while away some time in this beautiful building enjoying a coffee and a cake but first I decided to explore some more of the medieval quarter – I could always come back for one of their set lunches later. 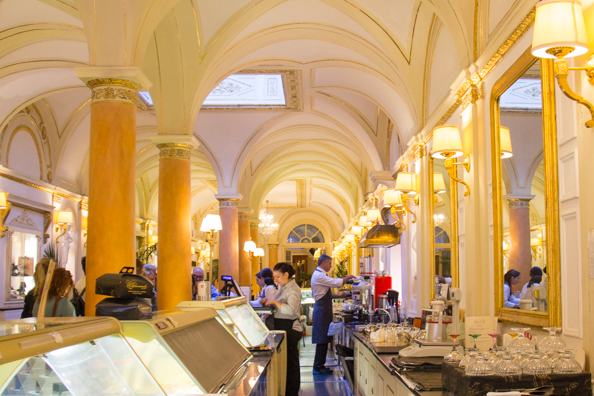 I followed Via di San Lorenzo runs south from Palazzo dei Priori to Piazza del Gesù, with the eleventh-century Chiesa di San Silvestro one of the oldest churches in Viterbo. It was in this church that Henry of Cornwall He was murdered by his cousins while attending mass on their way home from the Crusades. A plaque commemorates this event. At the far end of this square is the thirteenth century Torre del Borgognone and in the middle, a small restaurant. I did stop for a cappuccino and a lovely fresh, home-made brioche. But as I saw the dish of the day, a home-made vegetable pie, I felt I had made the wrong choice. 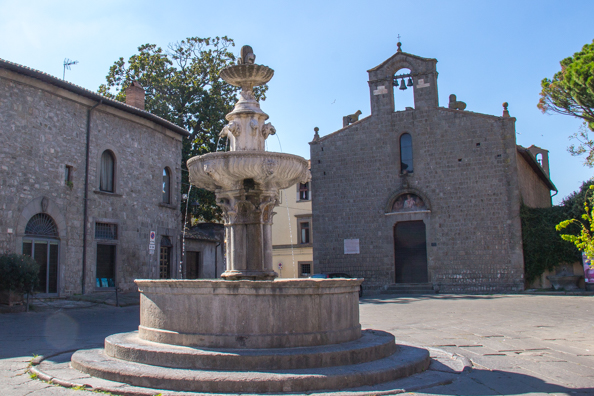 Beyond Piazza del Gesù is the pretty Piazza delle Morte and another charming fountain, the Fontana a Fuso. This piazza is on the edge of the medieval San Pellegrino quarter. This quarter has many well-preserved medieval houses. When Piazza delle Morte was built in 1200 it was called Piazza Nuova. Later it was named San Tommaso as it was he who built the fountain in this square. The original fountain was destroyed soon after it was built. Its replacement is one of the oldest fountains in Viterbo. It became known as the Fontana delle Morte (Fountain of Death) during the sixteenth century with the arrival of the building Oration and the Brotherhood of Death. This piazza also has entrance to tourist attraction Viterbo underground – a bit of fun that conjures up images of popes and cardinals creeping through underground passages although there is no evidence to suggest that the papal palace was linked to these underground passages. Only short stretches of these tunnels have been opened up as many properties have converted them into wine cellars. 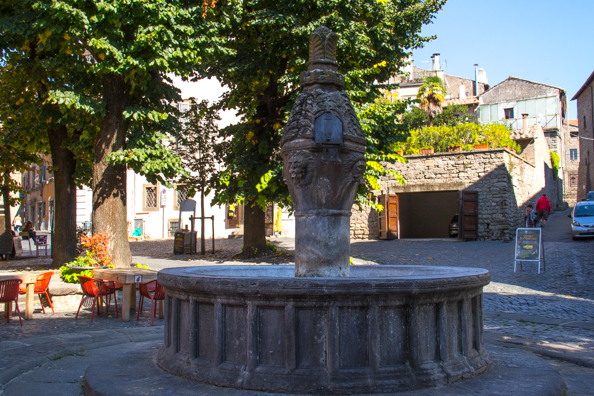 Continuing past the fifteenth century Palazzo Farnese on the right into the Plazzo San Lorenzo https://www.romeartlover.it/Viterbo.html Entering the piazza visitors walk past the Etruscan wall of Cathedral Hill. The large stone blocks that can be seen as the foundations of the buildings at the entrance to Piazza San Lorenzo are the remains of the city walls of an Etruscan town. The hill on which the cathedral now stands was the ideal site on which to build a new town during the Etruscan period because it was easy to defend and these blocks provide the evidence. The piazza is dominated by the cathedral, Cattedrale di San Lorenzo. This Romanesque church with its Gothic bell tower was built in the twelfth century. It was modified by Cardinal Gian Francesco Gambara when he was appointed bishop and governor of Viterbo in 1566. He was keen on the Renaissance culture and commissioned a new façade in 1570. The cathedral is one of three museums in the square that are open to the public. 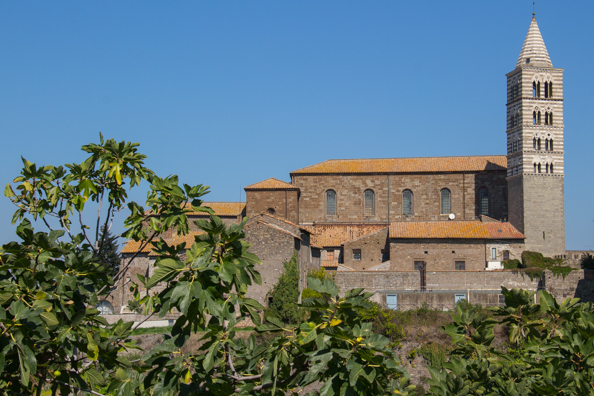 To the right of the cathedral is the Palazzo dei Papi (Papal Palace) which was built in 1266 and features a Gothic Loggia. This building has been the Bishop’s Palace (the seat of government) since the fifteenth century and several conclaves were held in its huge hall during the thirteenth century for the election of the Pope. The Palace, built in the mid-thirteenth century, is a striking reminder of this town’s former importance. It was built to house the popes who had sought refuge in Viterbo. Its most striking feature is an elegant seven-arched loggia. The small courtyard behind these interlocking arches is also pretty, with a lion-bedecked fountain and views out towards the city walls. One of the best stories about the Viterbo concerns the first conclave held here to elect a Pope. In 1268 eighteen cardinals assembled in the bishop’s palace. After eighteen months they were still deliberating between two candidates. The locals decided they should be encouraged to make a decision and locked them in the conclave and fed them bread and water. They even removed the roof but they still took nearly three years to make their decision. It was the longest conclave in history and also the origin of the name conclave which comes from the Latin, cum clave meaning, with key. Most of the palace is now open to the public everyday and visitors can see the papal election hall (Salone or Aula del Conclave). Entrance is through the Museo del Colle del Duomo. 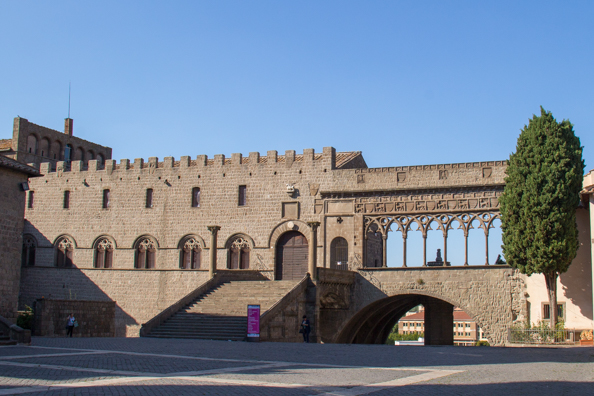 By the time I reached the Papal Palace the sun was going down again and it was time to move on. I had barely scratched the surface of this amazing medieval town that truly deserves its reputation as one of the most complete towns of the period.