I was blown away by the food; fresh, thinly crusted brown bread with slightly salted butter; exquisite gourmet dishes; hand-crafted fruity beers; sparkling sophisticated cider; mouth-watering desserts and pastries … Where was I? Top London restaurants, Parisian haute cuisine? No, I was in Tallinn, capital of Estonia. My food fest began at restaurant MEKK MEKK means the taste or the essence of Estonian cuisine. A cuisine that has taken the best from all the nations that have occupied or controlled this country – Sweden, Denmark, Germany, Finland and Russia. According to the main chef here, Rene Uusmees modern Estonian cuisine is rooted in traditions, culture and the simple wisdom of their grandmothers. My overall impression was a respect and love of food that resulted in dishes made from wholesome, freshly prepared ingredients. My smoked salmon starter was delightful and the prelude to a perfect dining experience. 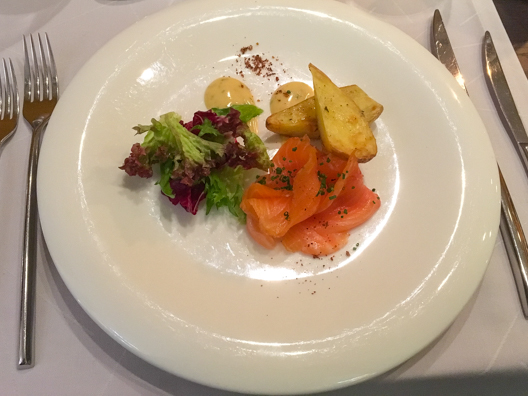 I doubted the quality of my MEKK experience would be repeated as this restaurant is based in a five-star hotel, the Savoy Boutique Hotel. I was wrong. My next culinary experience was at a lovely restaurant with a lot of history. Restaurant Leib resto ja Aed is situated at the far end of a pretty courtyard adjacent to the city walls. Visitors may wonder why the path through its garden is lined with famous Scottish personalities including Sean Connery. The interior with beautiful wooden furniture and paintings on the walls was reminiscent of a British pub which was not surprising as the building originally housed the Scottish pub, home of the Scottish Club. As it was a cold winter’s day we ate in the cosy interior but in the summer guests can also eat on the terrace outside. 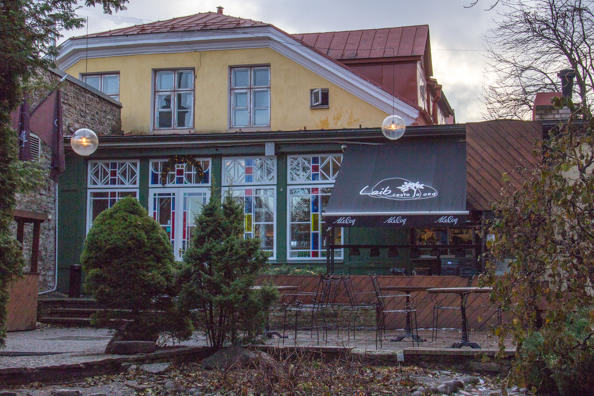 Leib means black bread and the restaurant was given this name in homage to bread, Estonia’s favourite food. It is a worthy name as it mirrors the objectives of the restaurant – fresh, warm, simple and honest. The restaurant uses simple Estonian ingredients to create seasonal menus. Soon after we took our places a basket of this bread was placed in front of us. It was nearly empty before I had time to raise my camera. The restaurant bakes its bread with seeds and it has a slightly sweet taste. Bread also features in the dessert menu, crème brûlée with black bread crumbs and blackcurrants or black bread ice cream are two of the choices. I was to experience the popularity of freshly baked bread in a small local bakery when I visited the Telliskivi Creative City during my stay in Tallinn – the queue was outside the door waiting for the next batch of bread to bake. 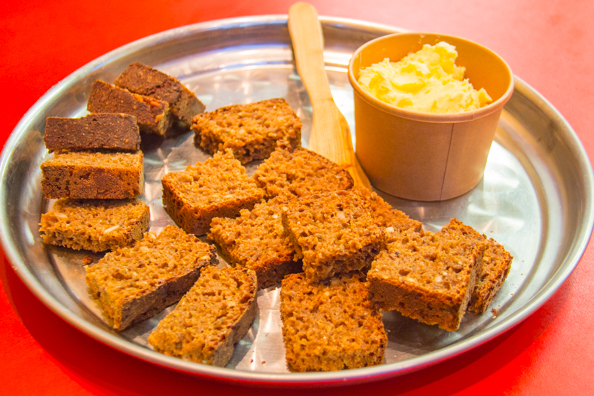 Once I had tasted one traditional food I moved on to another, Estonian hand-crafted beer. Small local breweries are producing a wide range of light, lovely beers some of which are being listed amongst the world’s best. I am not a beer drinker and was doubtful when the waiter suggested I might like to try one with my meal. But who can resist the thought of fresh mango and passion fruit? I was not disappointed. Hand-crafted by Hopster this fruity wheat beer was a revelation, a very pleasant lunchtime drink. Hopster brewery was established by the same adventurous team of head chef Janno Lepik and Baltic’s best sommelier Kristjan Peäske who run the restaurant – a winning combination. Their dinner beers have been created to compliment the food they serve and they certainly do that. Beer is not the only drink on offer as the restaurant also has an extensive list of wines, liqueurs and other local drinks. Home-brewed beer has long been a tradition in Estonia established, it is claimed, when it was safer to drink beer than the water. Currently this industry is undergoing a revival due to a growing desire for lighter alcoholic drinks. 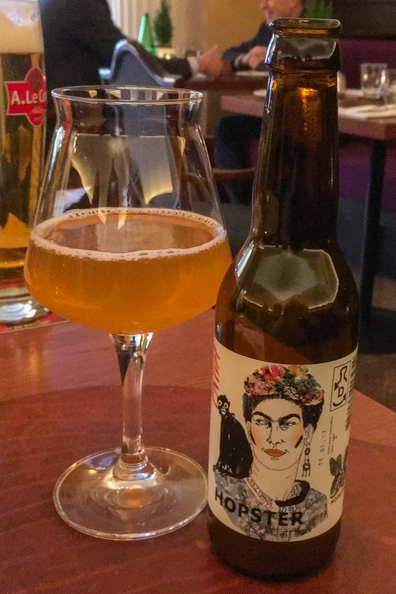 The menu features produce of the season and is therefore not extensive but every dish sounded appealing and I finally settled for the pan-fried pike perch with cauliflower cream, marinated onions and chive oil. The restaurant works with Estonian farmers, butcher and fisherman to produce dishes made from authentic, fresh, local ingredients. I was surprised at the elegance of my main dish and it tasted every bit as good as it sounded. 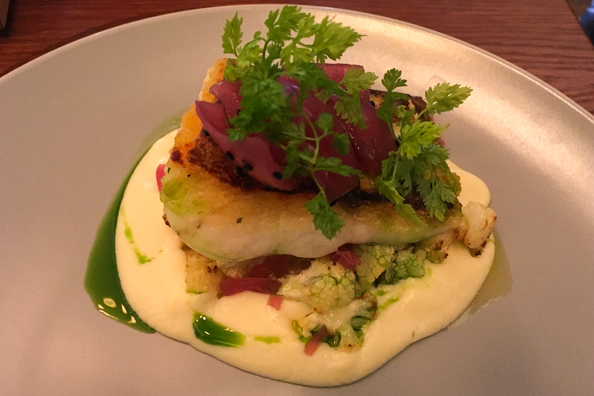 Dinner that evening was at Restaurant Tuljak. Tuljak was a favourite restaurant of the sixties when the Russians occupied Estonia. It has recently been extensively restored to its former glory, a very stylish restaurant with a large terrace overlooking the sea – ideal for summer night dining. The menu refers to its former glory days of when it was known as Carina restaurant and served generous sandwiches and handmade waffles filled with butter and Cognac cream. These classics have been upgraded by the owner Tõnis Siigur. My exquisite dessert, tiramisu Tuljak with blueberries, featured another favourite of the Estonian diet one of their superfoods, the blueberry. Blueberries grow everywhere in Estonia and Estonians love to eat them fresh and make them into jams. Reputedly they have more intense flavour than those that grow in other countries. 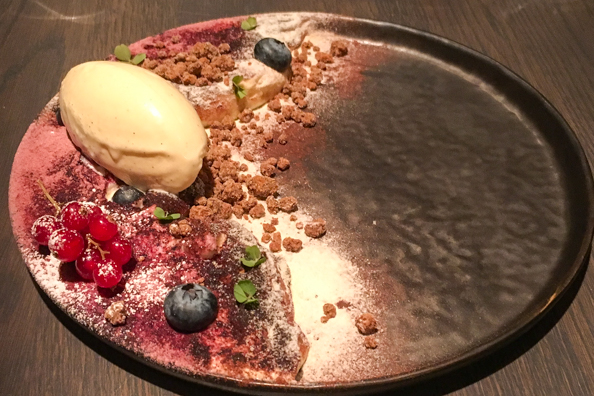 My last meal in Tallinn was a very different experience and billed as ‘casual dining” Restaurant Fabrik won my heart as soon as I stepped through the door. A magnificent display of home-made pastries had me wondering if I could order a different pastry for each of my three courses. I managed to restrain myself and ordered a starter and a main. Fabrik has won an award for casual dining but clearly this relates to the informality of this small restaurant as the dishes were complex and delicious. I followed the advice of the waitress and had the lamb which was really good. When asked what I would like to drink I asked for a list of beers and immediately my attention was drawn to a cider listed above the beers. I used to drink a lot of cider in England until I discovered the choice was becoming increasing limited. I chose the cider, Metsik Kratt Õunasiider peninuki napsukoda, which is made in gin barrels. The light, sparkling liquid complemented my meal perfectly. Peninuki began as a domestic brewery dedicated to producing non-traditional cider. It has expanded into its own premises and grows its own apples. It is possible to organise tastings of the ciders and beers produced around Tallinn but we did not have time. 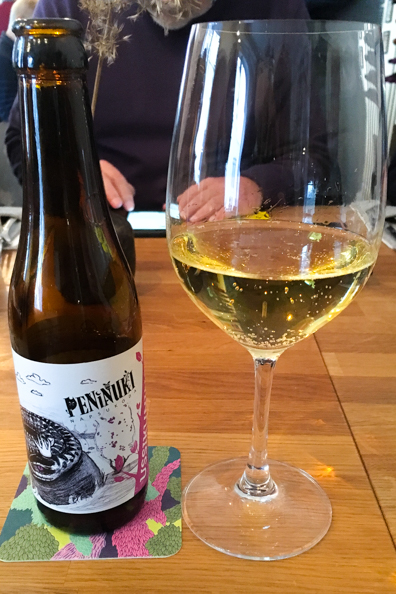 Finally, the moment I had been waiting for, a chance to browse the cake cabinet to choose a cake for my dessert. It was not easy as they all looked so tempting. Eating a cake at Fabrik is like tucking into a work of art, but a lot tastier. 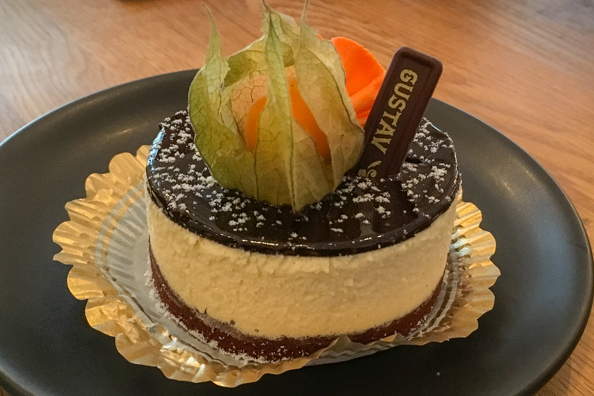 Afternoon tea featuring home-made chocolates was a must once I had seen the Chocolaterie in the corner of the Masters Courtyard and there was just time before we moved on to Tartu. Some of the oldest buildings in Tallinn occupy this courtyard and I fell foul of an uneven floor when I tripped and landed in the lap of a surprised customer. We both giggled as he heaved me to my feet but his wife was clearly not amused.

Tõnis Siigur, Tuljak Restaurant is leading a revolution in Estonian cuisine as he wants Estonians to enjoy their food. As far as I am concerned he has succeeded in his mission – Estonian cuisine is fabulous.