As I had already explored the old town of Tallinn, capital of Estonia I was delighted when Katrin, our city guide, offered to show us a different area of Tallinn. The Rotermann Quarter was established by the Rotermann dynasty during the nineteenth century. It flourished during the early twentieth century under the leadership of Christian Barthold Rotermann. The Rotermann Quarter was home to flour and bread factories, a timber plant, roofing paperboard mill, lumber mill, wool factory, raw linen processing plant, porcelain and decorative glass workshop, weaving workshop, refrigeration house, a department store and the Rosen & Co Tallinn Vodka Factory. This industrial island, separated from the old town by a main road leading to the port is now receiving a face-lift as old industrial buildings are being turned into modern buildings that now house apartments, offices, shops and cafés. A good example of this transformation is the addition of three glass towers to a carpenters’ workshop by Koko architects. 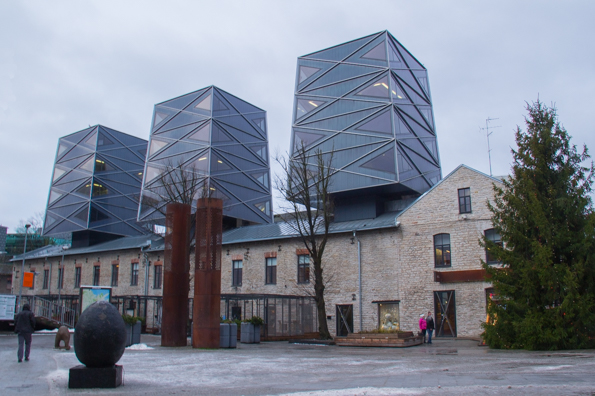 During the Russian occupation this area had been largely neglected and several buildings, abandoned by their original owners were dismantled. However, in 1979 the Russians did allow this decaying area to be used as the set for Andrei Tarkovsky’s world famous movie, Stalker. In 2001 the National Heritage Board designated the area as being historically valuable and the old industrial buildings found their new function. By then the salt storage building, built in 1908, and one of the most distinctive Estonian limestone buildings had already been reconstructed. Since 1996 this building has housed the Museum of Estonian Architecture. This museum has a permanent exhibition presenting an over-view of Estonian architecture and also features temporary exhibitions. 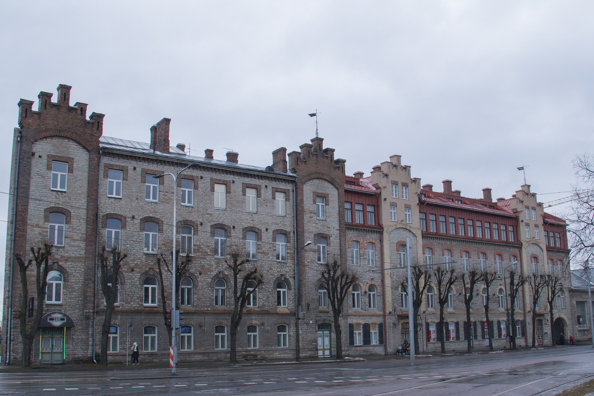 Later that day we visited another project that is reviving abandoned industrial buildings. Telliskivi Creative City is based in a complex of Russian-built factories. It takes its name from the original name of the street in which it is based. The first industrial buildings, the Baltic Railway factories, were built here in 1869. This encouraged a boom in industrial development in this area which soon spread into the surrounding residential areas. Following the electrification of the railways the complex was re-named the Tallinn Electrical Engineering Factory. This complex, now in private ownership, is part of an initiative to make industrial waste-lands great again. An initiative that is supported by the government. The rather severe buildings have been brightened up by some fantastic street art. Street art is encouraged but there are rules regarding content. 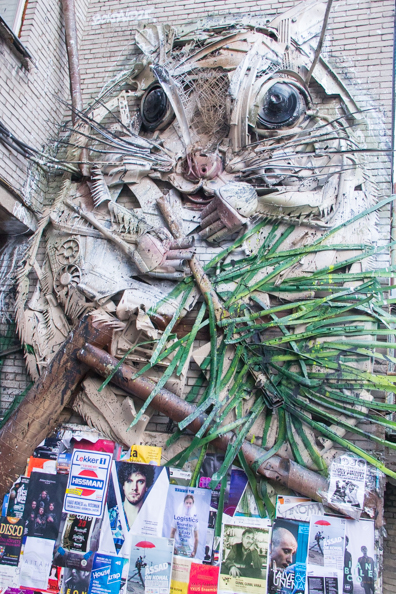 We were privileged to be given a tour of the complex by the current owner but urban guided walks are available to the public. The Creative City, an initiative that started in 2007 has become a popular meeting place for young creatives. Housed in the ten buildings that form this complex are a new theatre, workshops, offices, shops and a gym. There is a flea market here every Saturday (inside in the winter and outside in the summer). During 2016 it has hosted over five hundred different events that have attracted more than seven hundred thousand visitors. Five original annual festivals have started here, the February dance festival, the Italian Street Food festival, an annual celebration of the Flea Market and Open Days. This initiative offers community support to creative industries and also some financial support such as subsidised rents. Tenants are hand-picked as substance is important to the project and each tenant must add value to the project and the community. It is a profitable model that has been replicated in other areas. 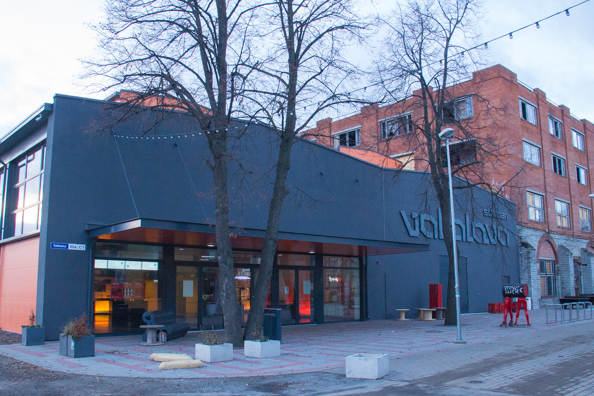 For me the most impressive Russian building in Tallinn is the Russian Alexander Nevsky Cathedral. Situated on top of Toompea Hill this impressive onion-domed church is Estonia’s most important Russian Orthodox cathedral and the most opulent Orthodox church in Tallinn. It was built in 1900 when Estonia was part of the tsarist Russian empire. The Russians carefully selected the site for their cathedral. It was built on the same place where a statue of Marin Luther had once stood. It overshadows Toompea Castle, the seat of the Estonian government. Its purpose was to symbolise the religious and political domination of Russia over this increasingly restless Baltic state.
This spectacular, onion-domed structure perched atop Toompea Hill is Estonia’s main Russian Orthodox cathedral. The cathedral is dedicated to the Prince of Novgorod, Alexander Yaroslavich Nevsky, who halted the German crusaders’ eastward advance. Now it is important only as an architectural masterpiece with a powerful peal of bells. 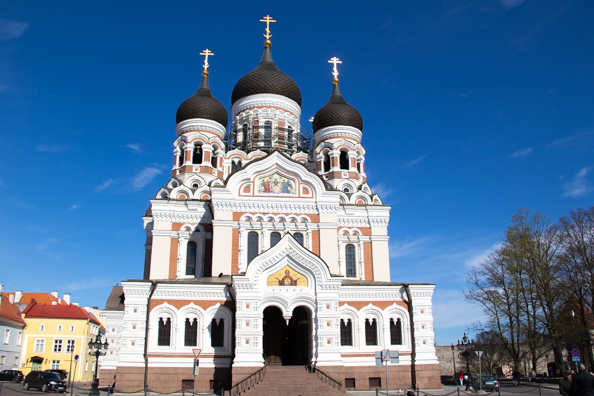 Another interesting church is the bright yellow church of Saint John in Freedom Square. This neo-Gothic church has survived two attempts to demolish it during the last century because it was considered architecturally out of sync with its surroundings. The need for a new church in Tallinn was first discussed in the mid-nineteenth century when the Holy Spirit Church could no longer accommodate its growing congregation. A new church, dedicated to St. John the Evangelist, was built on an area where the town moat had once flowed past the city walls. As the land was too soft to support the building oak trunks were rammed into the ground to provide extra support. By the 1930s Freedom Square was encircled by new art deco and functionalist buildings. Plans to demolish the church and be-build the square were abandoned due to the Second World War and the subsequent occupation of Estonia. A second proposition by avant-guard architects in the 1950s also failed to come to fruition. 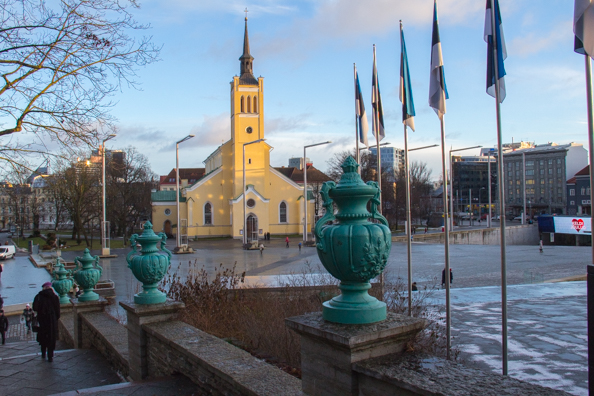 Since the last days of the Tsars and through Estonia’s first period of independence Freedom Square was a place of parades and celebrations. During the second period of Russian occupation and for a long time after Estonia regained its independence the square was neglected. In 2009 it was restored to its former glory and today it is a popular place to relax and appreciate the building boom of the 1930’s. Overlooking the square is the Monument to the War of Freedom (1918 – 1920) when Estonia first emerged from Russian domination. The form this monument should take was the subject of controversy. Finally, it was agreed that the monument should include the Cross of Liberty, Estonia’s most distinguished award. Fashioned out of one hundred and forty three glass blocks and subsidised by donations from the public it was completed in 2009. Recently it has undergone essential and expensive repairs no doubt re-igniting the debate regarding the from this monument should have taken. 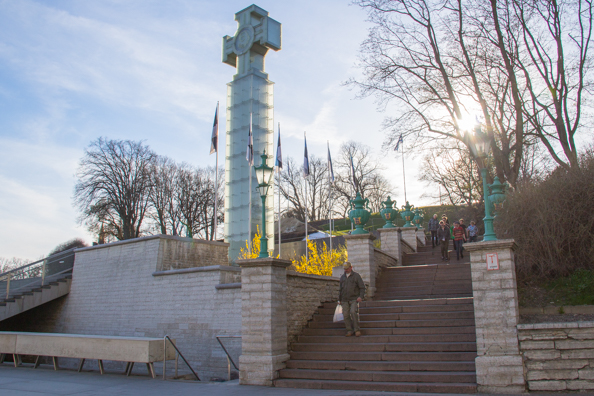 Adjacent to Freedom Square is another open space created when the Russians bombed Tallinn during the night of March 9th 1944. More than 500 civilians were killed and 5073 buildings destroyed or damaged. Fortunately, most of the Old Town of Tallinn survived but Harju Street and the Niguliste Church were seriously damaged. Between 1945 and 1948 all the buildings that had been deemed unsuitable for restoration were demolished. Nothing was done with the open space until 1963 when the Writers’ House was built there. In 1965 a monument to Eduard Vilde was unveiled opposite this building. Finally, after much discussion and a referendum regarding what should be done with this space a multi-level rest and recreation ares was created in 2007 previously excavated and exposed building foundations. Phoenix rising from the ashes? 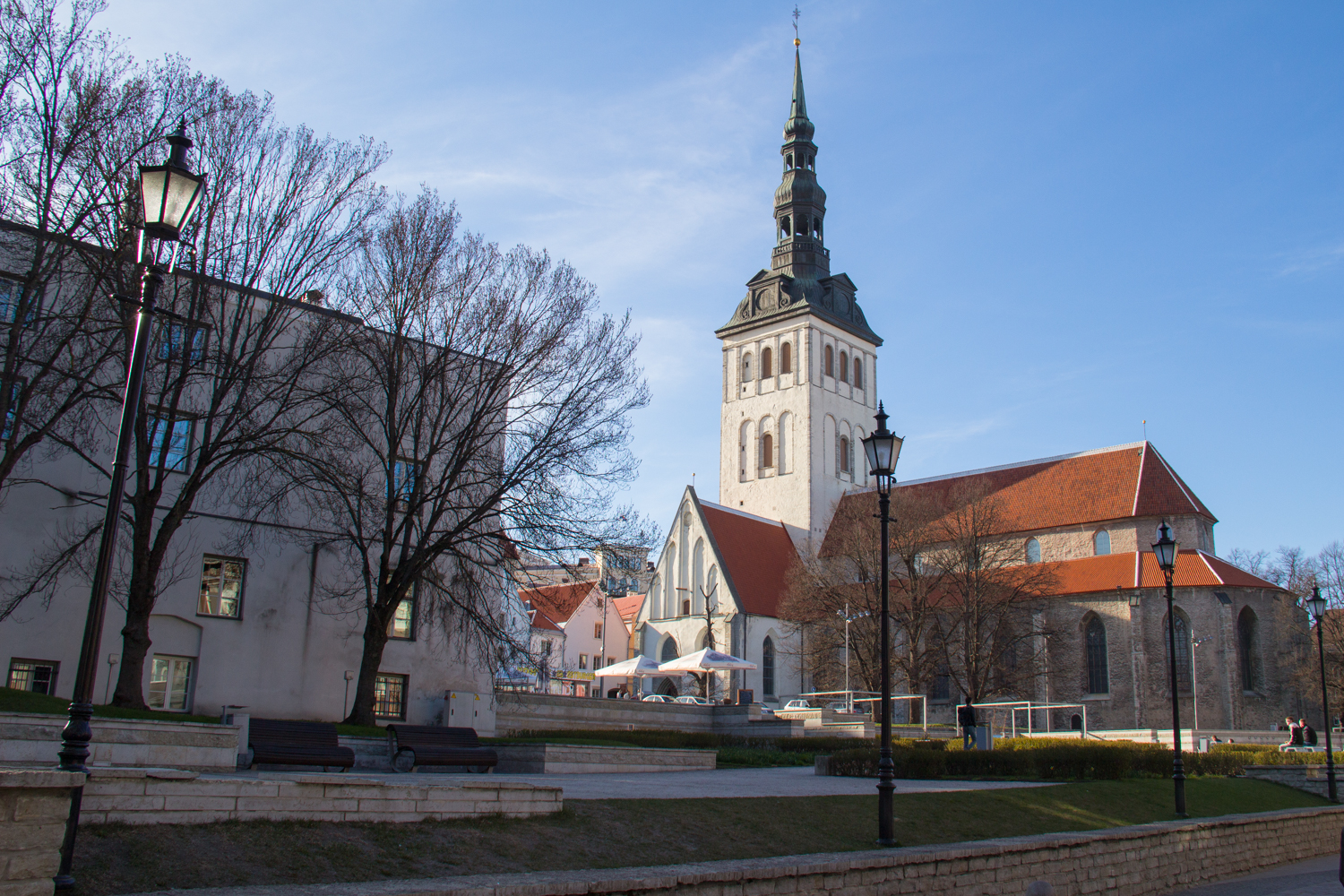