During the Middle Ages the Estonian Vikings were a thorn in the side of Denmark, a great military and mercantile power at the time. In 1219 the Danish fleet sailed into the harbour of Tallinn, and claimed possession of Tallinn and Northern Estonia. A claim that was upheld by the Pope. Denmark ruled Estonia until 1343 when the country was taken over by the Teutonic Order intent of converting pagan Estonia to Christianity. This order was a small, voluntary and mercenary order formed help Christians on their pilgrimages to the Holy Land. These Teutonic Knights served as a crusading military order to protect Christians in the Holy Land and the Baltics. Denmark subsequently sold Tallinn to Germany where the order had originated. Once these Crusaders or Iron Men had taken over Tallinn they ruled the town from the castle established by the Danes on Toompea Hill. This castle has always been the seat of government in Estonia and today it is home to the Parliament of Estonia. The castle has been revamped over the centuries and was revamped between 1767 and 1773 when it was given a pink, late Baroque façade. 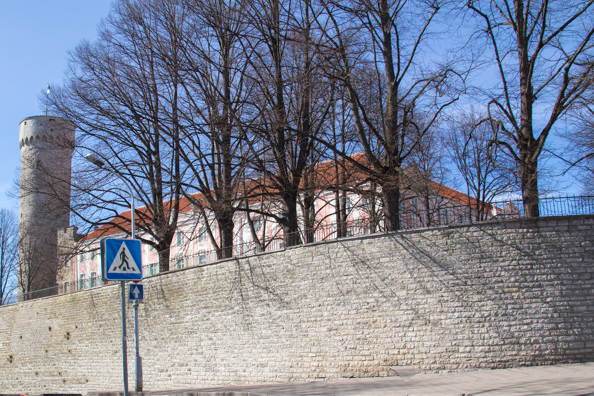 Once the Crusaders were established in the castle on Toompea Hill they were followed by others, commoners, of a lower order. There was no room for these people on Toompea Hill so they established their own town. Tallinn developed as two different towns, the Upper Town and the Lower Town. Each town had its own laws and its own cathedral. The cathedral of Saint Mary the Virgin, also known as the Dome Church, was established sometime before 1233. It has been rebuilt several times since then and consequently it is a mixture of architectural styles. It was originally the church of the elite German nobles of Estonia and this is reflected in its elaborate interior. Visitors can climb the Baroque bell-tower for views of the city below. 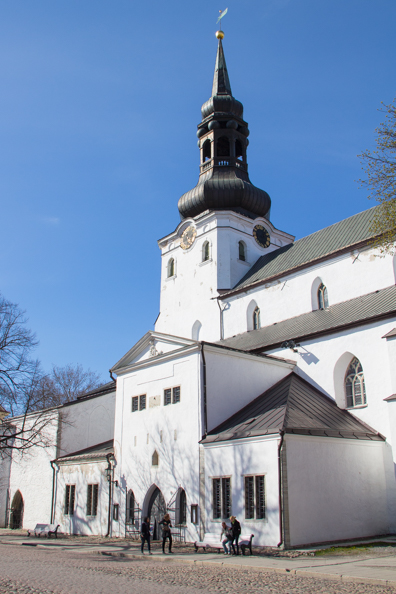 The Lower Town cathedral now known as the church of Saint Nicholas was one of the wealthiest churches in medieval Tallinn. It is thought that the original building dates back to the middle of the thirteenth century and its walls are now beneath the present church that was re-built in 1953. During the Middle Ages it was one of the town’s most magnificent and beautiful churches and by the beginning of the sixteenth century it had more than twenty side altars. It reflected the prosperity of the local merchants based in the Lower Town that resulted from membership of the Hanseatic League. Valuable works of commissioned art were displayed here including the only version on canvas of the Danse Macabre by Bernt Notke. In 1984 the church became the home of the Niguliste Museum, a branch of the Art Museum of Estonia. The church now houses the largest and most significant collection of ecclesiastical art from the Medieval and Early Modern periods in Estonia. 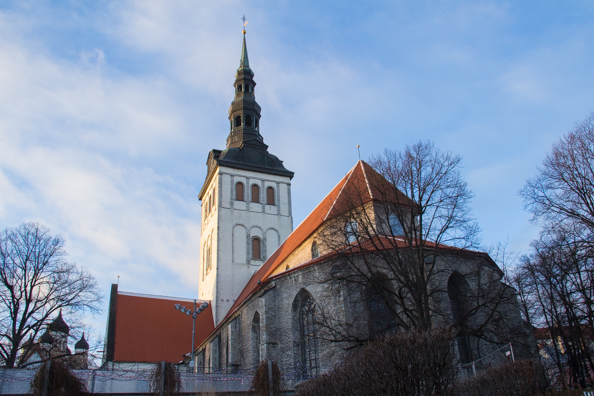 For the past eight centuries the Town Hall Square has been the most important square in the Old Town of Tallinn. Surrounding this square are old merchants’ houses built when Tallinn was a Hanseatic town. These houses were both a business, a family home and the upper floors were often used as a warehouse. During the thirteenth century Tallinn was granted trading privileges that included the coining right in 1265 and the warehousing right in 1346. According to these rights any merchandise passing through Tallinn had to use local merchants as intermediaries which meant that its citizens received a significant amount of the trade between Western Europe and Novgorod in Russia. The most important merchants in Tallinn were members of the Great Guild whose building, the Great Guild Hall, now houses the Estonian History Museum. This lovely square is still a popular meeting place, venue for events and a natural magnet for tourists. 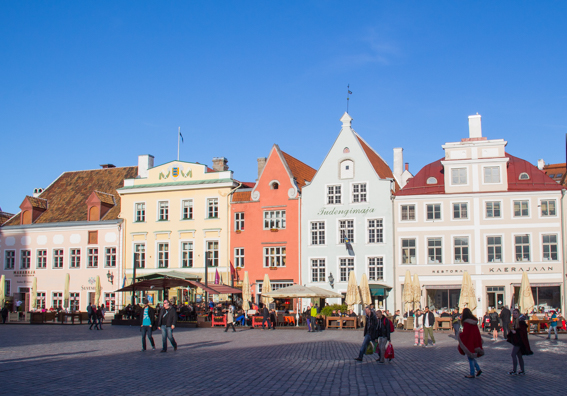 The impressive Gothic Town Hall that dominates the Town Hall Square was built at the beginning of the fifteenth century as a meeting place for the ruling burgomasters or mayors of the city. It is the only complete Gothic town hall in Northern Europe and is now used for entertaining visiting kings or presidents as well as a venue for concerts. At the top of its spire is the Old Thomas (Vana Toomas) a weather vane that has been a symbol of Tallinn since 1530. During the summer the Town Hall is open to visitors who can climb its tower to see the Old Town spread out below them. Its cellars sometimes host exhibitions. 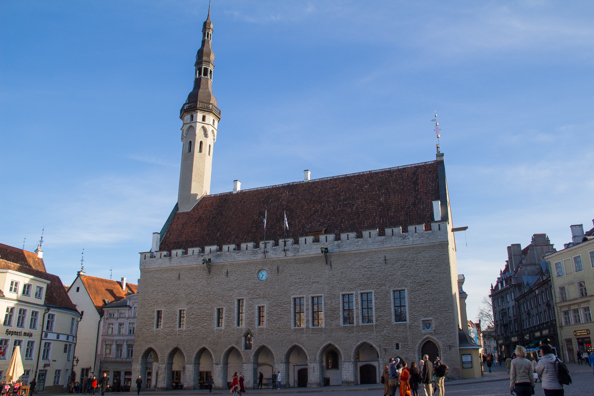 Tallinn is famous for its medieval city walls and fortifications. In 1265 Margaret Sambiria (Queen and spouse of Christopher 1 of Denmark) ordered the construction of the first wall around Tallinn and it became known as the Margaret Wall. That may also be the source of the name of the Fat Margaret Tower. This tower and the adjoining the Great Coastal Gate were built to impress visitors to the city as well as defending the seaward side of the town. The Great Coastal Gate and the Viru Gates, are the only two remaining gates of the six gates that controlled access to the town in medieval times. Four floors of the historic Fat Magaret cannon tower now house the Estonian Maritime Museum. 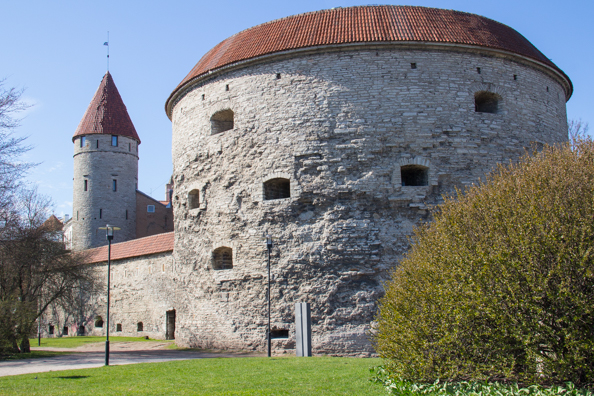 Medieval Tallin had sixty-six defence towers and twenty-one have survived until the present time. The completeness of its Medieval town led to it being designated a World Heritage UNESCO site. One of them Kiek in de Kök stands at the entrance to a fascination experience – a visit to the bastion passages. Most medieval defences included passageways connecting the bastions constructed in the walls. The most well-known of these tunnels are the Bastion Tunnels that run underneath Harju Hill and Linda Hill at the edge of Toompea. Some of these tunnels were discovered as late as 2003. Workers digging a foundation near the Occupation Museum found a pentagonal system of limestone-lined tunnels dating to the end of the seventeenth century. These tunnels were built for a variety of purposes, to move safely move soldiers and ammunition and also to spy on the enemy. They were largely forgotten until the twentieth century when they were renovated to be used as bomb shelters during the Second World War. Since then they have been used for a variety of purposes. They have provided shelter for the homeless and refugees from the Soviet regime. Being ten metres underground with regular exits to street level they were ideal for these purposes. During the 1980s the walls were strengthened to enable a section of these tunnels to be used as a bunker. Lessons on survival were held in the tunnels in case of a nuclear attack. I did the tunnel tour on foot rather than taking the tour on the slow moving train during which visitors are shown various stages in the history of the tunnels and a few decades into their possible future. During the tour visitors see some of the old equipment used to dig the tunnels in parts of the tunnels that retain their medieval appearance. Models have been put in place throughout the tunnels to illustrate their different uses. During our walk we saw the underground church and a prison cell where, reputedly, a prisoner actually died. 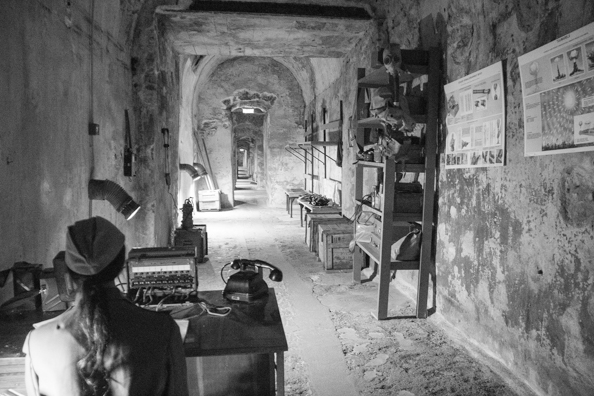 These tunnels have been open to the public since 2007 but only for guided tours. A new section of the tunnels was recently opened housing a new museum, the Carved Stone Museum, about the local stone. This museum is open to individual visitors and includes, on display for the first time, stones from the original houses of Tallinn. It was a great way to end my tour of Medieval Tallinn. 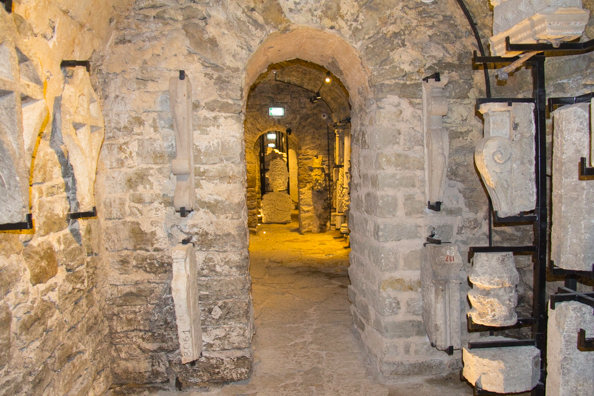