Tallinn and a Medley of Museums

Estonians love their museums and Tallinn reflects this passion with some interesting collections, exhibitions and buildings. Raeapteek in the Town Hall Square is the oldest pharmacy in Europe that has continuously carried on its business in the same building.. Although a pharmacy in Lübeck is currently disputing this claim. The exact opening date is not known, but it is evident from the documents of the town council of Tallinn that by 1422 the pharmacy already had its third owner. The pharmacy was owned by the same family until 1911 when it was sold. During Soviet times the government took over the pharmacy but it continued to operate as a pharmacy. The room that housed the original pharmacy has now become a small museum and the pharmacy itself operates from another room but it is still in the same building. When the museum was established it was the original Estonian History Museum but that has now moved to the Great Guildhall. Our guide in the pharmacy, appropriately dressed in period costume, enthralled us with tales of its history as we sipped klarett and munched marzipan. 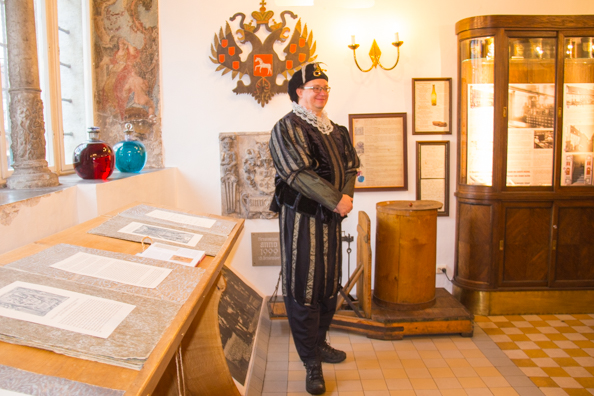 The pharmacy was famous for these “medicines”. Klarett is an alcoholic drink that was originally invented as a medicine. It was made by heating alcohol and adding some spices. It was such an enjoyable remedy that people flocked to the building to drink it. Extra staff had to be employed just to serve alcohol so that the pharmacists could get on with their work. Inevitable problems were experienced with large crowds gathered in one place drinking alcohol. The pharmacy was prosecuted but won the case against them. The pharmacy was the first commercial enterprise of any kind in Tallinn. Klarett was very expensive due to the spices used to make it – nutmeg, cloves, saffron, cinnamon, ginger and galangal (a spice originally from China). It is still produced today and can be bought from the pharmacy. Marzipan was also produced by the old pharmacy as a medicine as it was thought to be beneficial to the brain. There may be some scientific truth in this as almonds contain some lecithin that may enhance memory and learning. It probably originated from the Orient and came to Europe during the crusades. At this time one of the main ingredients, sugar, was really expensive and because it was also considered to be a medicine during medieval times it mainly produced by pharmacists. 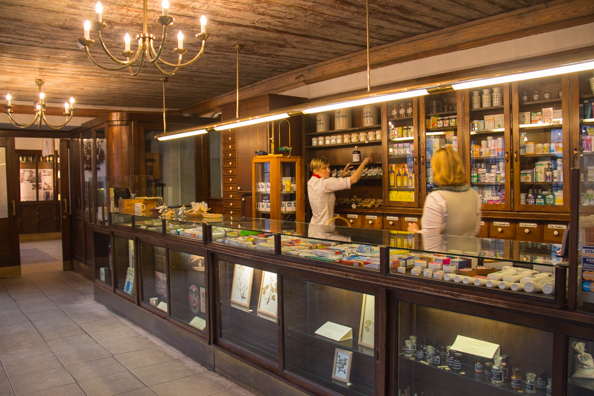 Legend suggests that marzipan did originate from Estonia although some German towns may take issue with this. As a marzipan lover I can believe this story. During the Middle Ages a rich merchant was taken ill and he ordered the pharmacist to produce a remedy. But the pharmacist was ill and told his apprentice to make the medicine. His apprentice, Mart, decided to add almonds and honey to make the medicine taste better. The medicine did not cure the merchant but he enjoyed it so much that he ordered large supplies of it. As the medicine grew in popularity the pharmacist began supplying neighbouring countries and it was named after its inventor – martipan by Bishop Henrik . Not far from the pharmacy is the tiny Marzipan Museum that occupies a corner of the Maiasmokk café house. This museum is dedicated to Georg Stude, a Baltic German who started the manufacture of marzipan in this building. It features painted marzipan models and cakes and a resident artist demonstrates the art of marzipan painting. This café is also a good source of marzipan bars at the best price in town. 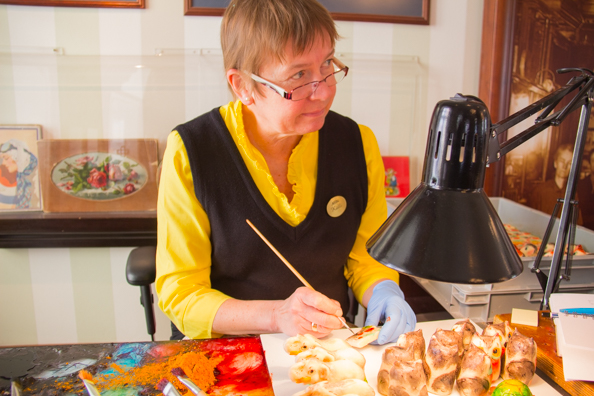 As mentioned earlier the historical Great Guildhall in the old town of Tallinn is home to the Estonian History Museum. This elegant building was commissioned by an association of Hanseatic merchants known as the Great Guild. For centuries it was the centre of social, commercial and judicial proceedings. In 1952 it was chosen as the site of the Estonian History Museum. Following extensive restoration and renovation the museum was modernised and houses a permanent exhibition – “Spirit of Survival. 11,000 years of Estonian History” opened in 2011. This exhibition occupies several different rooms and each room features a different topic associated with the story of Estonia. For example, the Gun Room is about the wars Estonia was involved in and the Power of the Elite relates the history of the Great Guild and its place in medieval trade. There is a also a National Awakening Period when, at last, Estonians were able to express themselves through literature, art and music. It was during this period that and this was when the Estonian song festivals were introduced. Tartu was the home of the first national festival but it is now held on a dedicated site in Tallinn. Initially performances were limited to Estonian songs and music but now the categories have broadened. The next festival is scheduled for June 2017. Walking around the museum was a fascinating experience as it was a mixture of exhibits and interesting architecture, in particular the original heating system still visible in the basement. 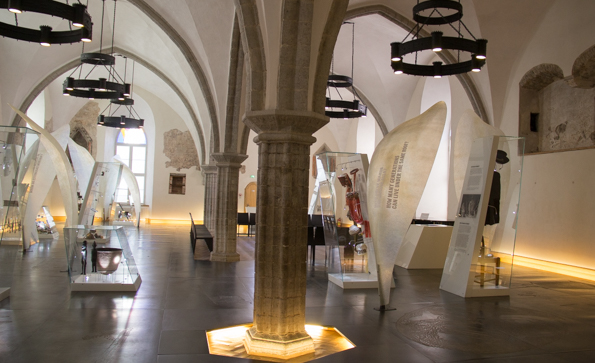 The Estonian Maritime Museum on Seaplane Harbour (Lennusadam) is another exhibition housed in a unique building built by Peter the Great to become part of the naval fortress he had been ordered to build by the Russian Emperor Nicholas II. This seaplane hangar is now one of the most treasured building in the Baltic States. It was the first of its kind, a huge steel and concrete shell without supporting columns inside. Nearly one hundred years after its construction it was decided this should be the home of the new Estonian Maritime Museum. By then the hangar was in a poor state of repair and required extensive renovation. A Danish company, Koko, won a competition to undertake this task. The result is a delicate balance between the preservation of the original building and the construction of an interesting space to house the new museum. The interior of the building has been divided into three levels, under the water, on the water and above the water. Relevant exhibits had been placed in their appropriate environment. 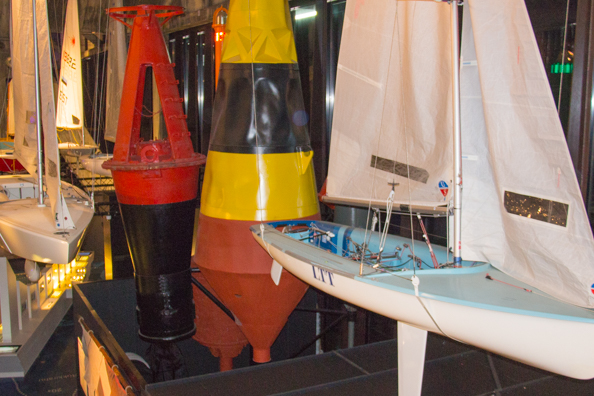 A major exhibit in the under water area is the submarine Lembit and visitors are able to clamber aboard to explore its interior and learn about the history of Estonia’s only surviving submarine. The submarine was made in England and remained active until it was taken out of the water in 2011. In the area above the surface of the sea is a replica sea plane. The originals also came from England but proved to be too flimsy as they were made of wood and none of them survived. 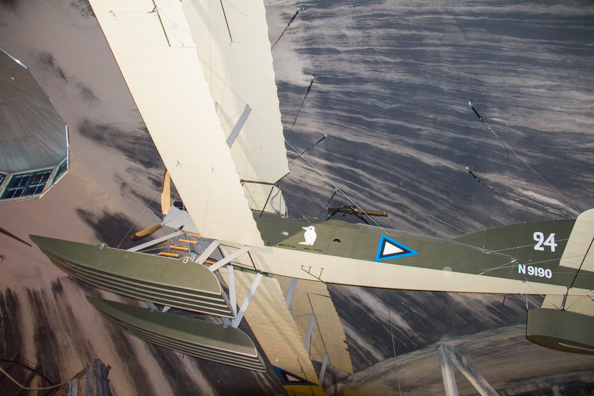 In the harbour outside the museum is the one-hundred-year old the century-old steam-powered icebreaker Suur Tõll. It was once one of the world’s most powerful icebreakers and has flown the flags of several countries and been known by several different names. Visitors can wander at will through the labyrinth of corridors and cabins. It soon became clear that the officers came from a privileged class and enjoyed plusher facilities than the rest of the crew. 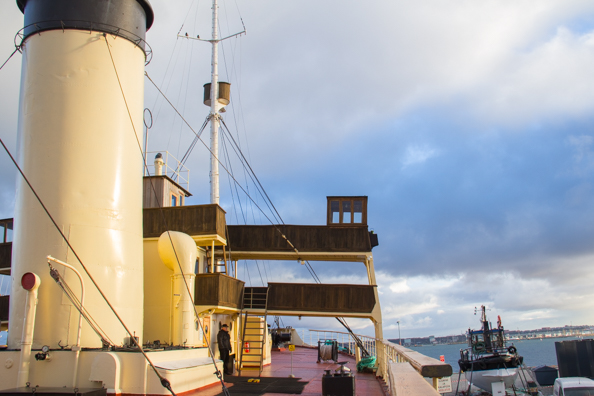 I am not aware of any famous Estonian artists but there are many who certainly know how to express themselves on canvas (and buildings) and it was interesting to visit Kumu, the national art gallery. I was fascinated by the way in which the political situation affected the art at the time. It was an insight into the way individuals had been affected during periods of occupation and repression. 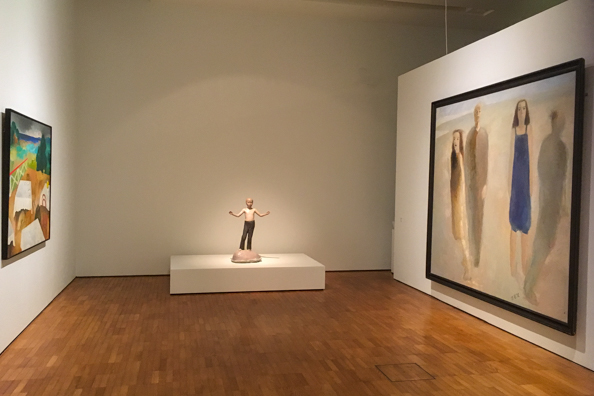 I had heard a whisper that the KGB museum on the top floor of the Hotel Viru was both informative and funny. Provided I could get a space on an English speaking tour. I was lucky and I was soon whizzing up in the lift to a top floor that is not visible from outside the building. We had to finish our journey climbing up a flight of stairs. These tours are very popular and have to be booked in advance through the hotel. Our guide, Maire, said she had worked in the hotel during the Russian occupation. She said she had been a floor keeper and had to make a note of all the people who came and went from her floor. Floor keepers were not allowed to talk to any of the guests and could not carry any foreign currency. It was very restrictive during that period for example jeans were not allowed in the hotel. Her eloquence in English suggested otherwise. I was not disappointed and thoroughly enjoyed this peek into KGB surveillance techniques. 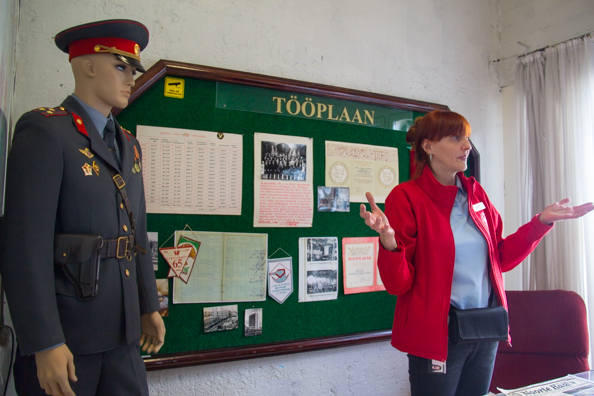 Each museum I visited gave me an insight into a different aspect of Estonian history and culture. Not only do Estonians love their museums they know how to make visitors love them too.