Tartu, the University Town of Estonia

Outside the Town Hall of Tartu, in Estonia is a statue of two students kissing. Or maybe they are newlyweds? The Kissing Statue was added to the fountain in Town Hall Square fifty years after it was built. This fountain was considered to bring good luck so newly-weds and their guests would visit the fountain and no doubt a lot of kissing went on. A more popular theory claims that it reflects the popularity of the fountain as a meeting place for students studying at the University of Tartu. The University is the very heart of the town of the town and its centre is the Town Hall Square. Since time immemorial Town Hall Square has been the centre of Tartu. During the Middle Ages it also became the centre of the municipal government and the first Town Hall was erected. This building was later replaced and its successor was destroyed in the Great Fire of 1775 which devastated the centre of the town. The present town hall was built during the period of early Classicism, and reflects this as well as following the tradition of Baroque urban palaces. 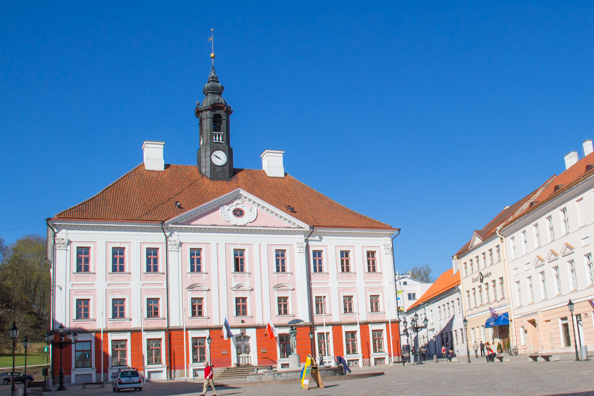 The Town Hall is also famous for its chime . Originally this chime was performed on eighteen bells manufactured in the Karlsruhe Bell Factory. In 2001, to mark the fifteenth anniversary of the chiming of these bells, sixteen new bells, cast by the Royal Eijsbouts Belfry in Holland, were added to the existing bells. Three times a day the thirty-four bells perform, a performance that lasts around fifteen minutes and is a popular tourist attraction. I jumped at the chance to climb up into the bell tower thinking I would have a great view of both the bells and the town below. After scrambling up a finely balanced ladder and climbing onto a small platform I discovered that I had to crane my neck at an impossible angle to see all the bells and my view of the town was obscured by the paraphernalia of the mechanical bell-ringing system. Despite the dust and cobwebs it was a memorable experience. 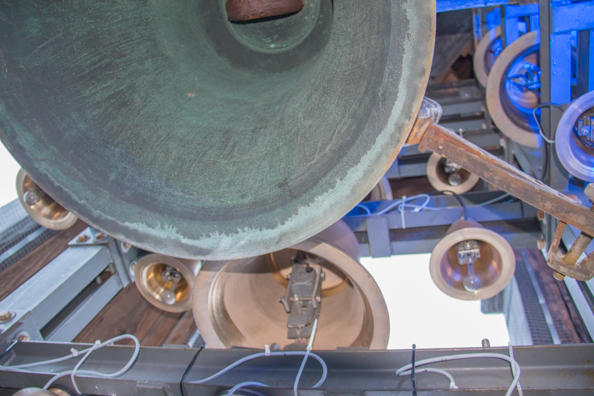 The University of Tartu has a fascinating history and has survived wars and foreign occupations since it was established by the King of Sweden as Academia Gustaviana in 1632. Since Estonia freed itself from a second Russian occupation in 1989 and the University of Tartu was established as the University of the Republic of Estonia it has become one of the top universities in the world. Tartu has a student population of around thirteen thousand all of whom require facilities for learning and living. The university owns many buildings in the town but the older buildings are the most interesting to the visitor. Its Main Building is the most important and the most attractive. Designed by the university’s architect Johann Wilhelm Krause and built between 1804 and 1809 it is one of the best examples of neo-classical architecture in Estonia. Our anticipation of seeing this beautiful building was heightened by the sight of a mural depicting it on a neighbouring building. 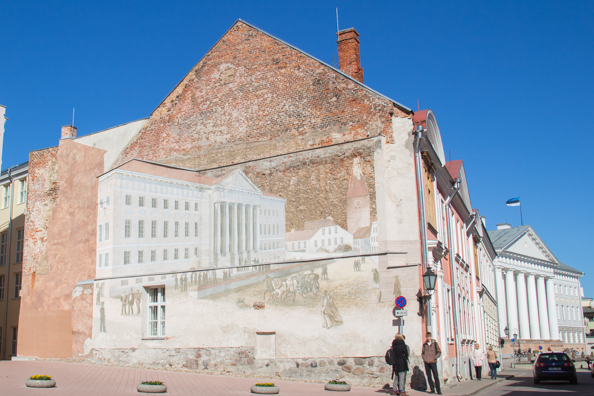 During our tour of the main building we visited the Assembly Hall, the most elegant room in the University and the venue for all the most important events of the University. It was severely damaged in 1965 due to a fire in the Main Building. It was restored soon after this fire. Next, we climbed up several flights of stairs up to the attic to visit the lock-up. It was here that students who had transgressed were ‘locked up’ for between one and twenty-one days depending on the seriousness of their behaviour. Examples of the are listed on a poster on the wall. Minor offences included the failure to settle a debt and insulting a member of the opposite sex. The most serious offence was taking part in a duel. In reality the students were not actually locked in the room as they were still expected to attend lectures but they were subject to a curfew. They were able to go out to shop and the wealthier students had their servants with them to look after them. Originally there were five lock-ups but four of them were destroyed in the Great Fire of 1775. The remaining lock-up has been refurbished using photographs of the original. As the visitor can see the occupants busied themselves sketching on the walls and inscribing them with words of wisdom. 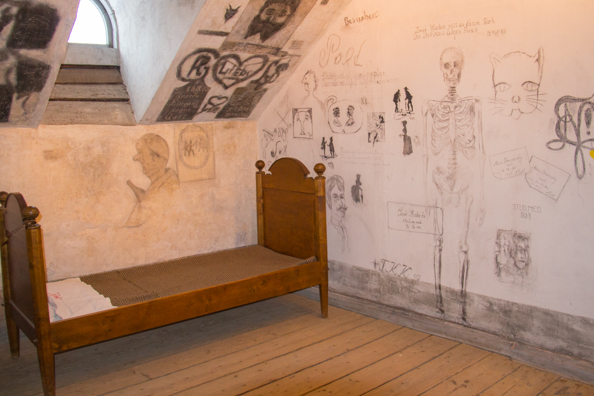 The Main Building also houses the University of Tartu Art Museum which has occupied the same rooms in the left wing since 1868. This museum includes the only antique art exhibition in Estona and a permanent exhibition of sculptures. These are plaster cast copies (original size) of some of the greatest works of ancient Greece. They were acquired from museums in England, Germany, France and Italy help students in their studies. The exhibits are displayed in rooms with ornamental Pompeian style murals on the walls. These murals were painted in 1868 when the museum moved to the Main Hall of the University. A number of original ancient objects including an Egyptian mummy, coins and vases are also on display here 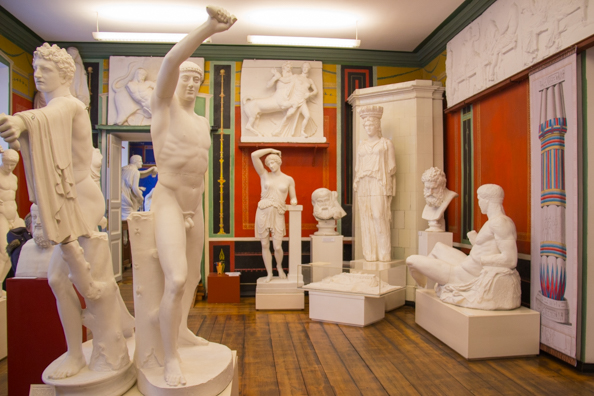 From the Main Building we walked up Toome Hill along a narrow road lined with trees and benches. We were tracing the steps of University professors when the University library was at the top of this hill. It was hard work carrying large tomes up and down the hill so benches were placed along their route for periods of rest. Apparently, some professors did actually die on their way to the library. Toome Hill was given to the University by Peter the Great when he captured Tartu for the Russians. During the Middle Ages the hill had been used for defensive purposes due to its strategic position. Later it was used by the townsfolk to graze their animals. The buildings that were already there became the property of the University. At the beginning of the eighteenth century the university turned the area into a public park. It is still a park and I could have spent all day there exploring. Amongst the trees is a lovely little café, Rotund, that serves good coffee and delicious home-made pastries. 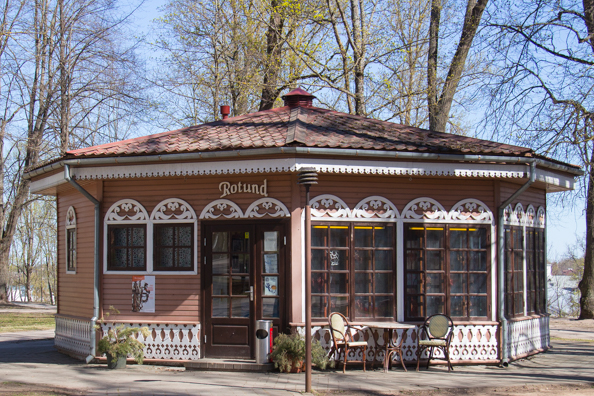 The library of the University was once housed in the sanctuary of the old cathedral on the summit of Toome Hill. In those days the hill was christened Slow Death Hill, or so they say. Imagine ancient professors staggering up and down the hill laden with heavy books. The path is lined with trees and benches so they take regular rests. According to local folk lore some academics did die walking up this hill. The construction of the Catholic cathedral began during the thirteenth century. Its impressive twin towers were not completed until the beginning of the sixteenth century. During the Livonian War it was neglected and deteriorated. This splendid Gothic building, constructed for a Catholic congregation of three thousand, was briefly re-opened during the seventeenth century. But in reality, after the Reformation it was redundant. It was re-opened at the beginning of the nineteenth century when the University of Tartu was re-opened and established its library in the sanctuary. In 1981 the University of Tartu Library moved out of this historical building and into a new building. Its old home was given to the University of Tartu History Museum . This latest addition to the museums of the University opened in September 1982. The main feature of this museum is a permanent exhibition detailing the history of the University of Tartu. It also has space for temporary exhibitions and a special attraction for children is The Crazy Scientist’s Office which runs regular workshops. The rest of the building remained in disuse until conservation work began at the beginning of this century and the twin towers have been open to visitors since 2005. 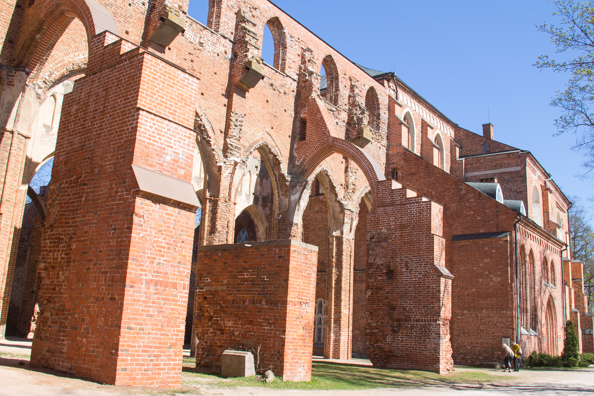 Although astronomy was part of the university’s programme during the seventeenth century its first Observatory was not built until 1810 when a young, talented Friedrich Georg Wilhelm Struve, working in the Astronomy Department and subsequently became the first Director of the Observatory. Struve was the first person to calculate the exact distance of a star from the earth. Between 1816 and 1852 Stuve and his colleague Carl Friedrich Tenner led the measurement of the meridian arc from northern Norway to the Black Sea. This arc, which today is known as the Struve Geodetic Arc, was of great importance to the development of geodesy and cartography. The arc was added to the list of UNESCO world heritage in 2005. A new Observatory, outside the city centre was opened in 1964 but the Old Observatory remained in use. In 2009 the renovation of the Old Observatory began and two years later it was opened as a museum under the auspices of the University Museum. The large telescope housed there is still in operation and open to visitors. We were walked up to the top of the building to see the telescope in action and admire the views of the city below us. 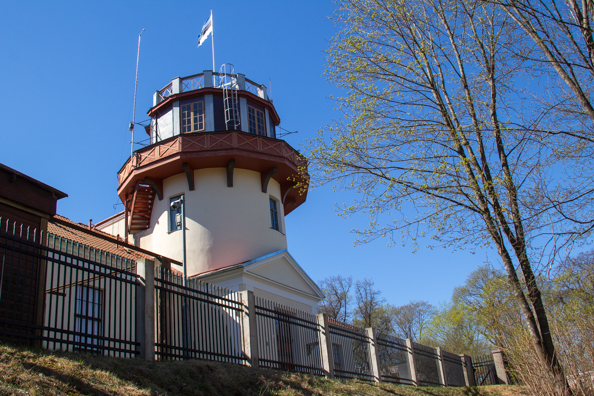 Statues of famous people who have contributed in some way to the University are displayed around the park. In particular a splendid monument to Johan Skytte, the first Chancellor of Tartu Museum. This stainless steel monument in the shape of a stamp stands in front of the beautiful Anatomical Theatre which is now also part of the University’s collection of museums. Before we left we had a chance to experience some of the student traditions. The sacrificial stone where Pre-Christian Estonians made sacrifices to the pagan gods they worshipped. Now the stone is used by students to burn their lecture notes when they finished their exams. Neither the Kissing Hill nor the wishing bridge require any explanation. We all obediently marched across the wishing bridge and made a wish. Mine came true – I came back to Estonia. 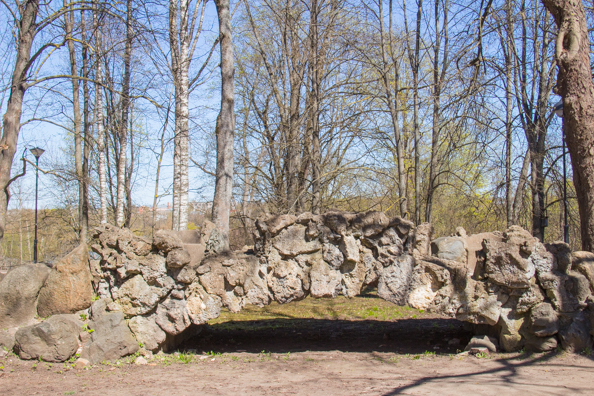