On a clear day you can see Mount Fuji from the top of the Tokyo Tower . So, I was delighted to discover that this tower was just five minutes’ walk from my hotel, Shiba Park Hotel. When I had arrived in Minato, a quiet suburb of Tokyo, I was disappointed as I missed the fast pace and crowds of the central suburbs. But now I was discovering there were some interesting sightseeing possibilities around me. Modelled on the Eiffel Tower and standing at three-hundred and thirty-three metres high Tokyo Tower is the tallest, self-supported steel tower in the world. It was built in 1958 to celebrate Japan’s rebirth as a major economic power. It was built by Nippon Television Corporation to house a television antenna. Radio antennas were added in 1961 and today it broadcasts digital television and radio. 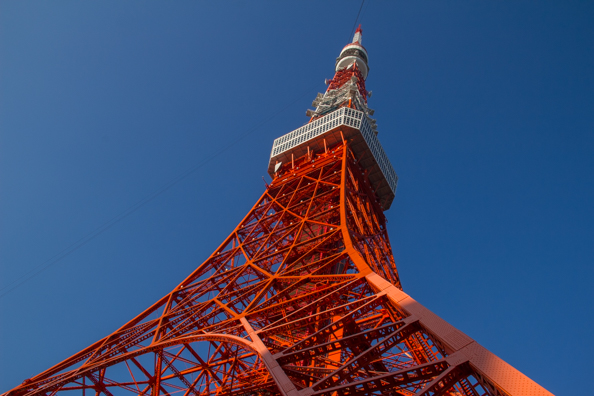 The tower is also very popular with tourists. Its main observatory at one-hundred and fifty meters is reached by a lift or a flight of six-hundred steps. Whichever you chose a fee is payable. Its height may be moderate in comparison with other more modern buildings but due to its central location it has interesting views of the city that surrounds it. There are also some ‘look down’ windows in the floor that visitors can walk on and a café as well as a souvenir shop. There is a special observatory one-hundred meters above the main observatory – accessible by a lift. It is from here visitors may be able to see Mount Fuji in the distance when the visibility is good. At the bottom of the tower is Foot Town a collection of souvenir shops, cafes and restaurants. This also includes an indoor amusement park, One Piece Tower, that was opened in 2015. 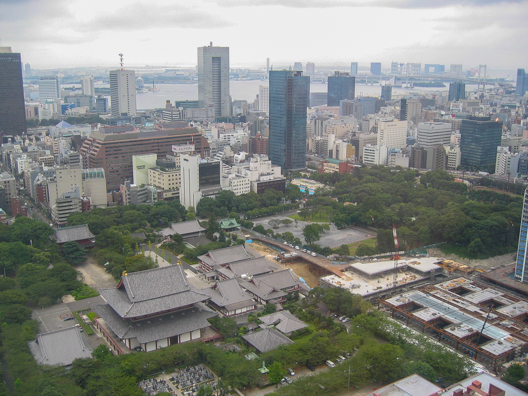 From my elevated position in the tower I had spotted a large key-hole shaped tree-covered mound that seemed out of place in a large city. It is an ancient burial mound, Maruyama-Kofun. The top part of the mound was excavated between 1897 but no tomb structures were identified. The most amazing fact about this mound is that it has survived for about seventeen centuries. Today its hill-top area is a good place for a picnic. It is also the site of a monument to Tadataka Ino (1745-1818) who made the first map of Japan using modern surveying techniques. He practised his surveying techniques on this mound. As I walked away from the tower I could hear the splashing of water but could not see the source. By then I was in Shiba Park, Japan’s oldest public park. It was the first to be officially designated as a park in 1873 just five years after the beginning of the modernisation of Japan. 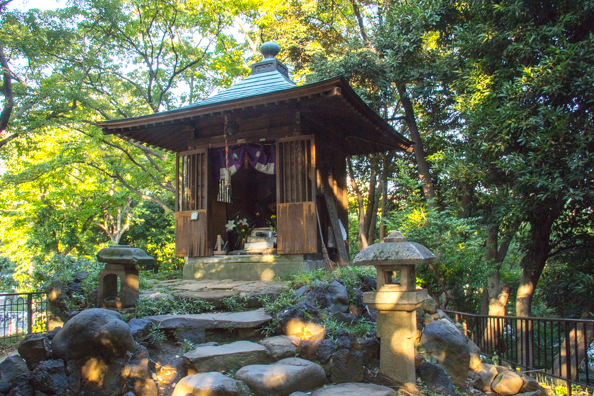 This park is ring-shaped as it was fashioned out of the grounds of the Zöjöji Temple which once occupied the whole area. I followed some steps down into a small artificial ravine Momiji-dani or autumn leaf valley. Here I found a waterfall and a variety of rocks and trees including a massive Japanese zelkova tree. Climbing out of the ravine I came across a pretty little wooden shrine nestling in the trees. Before 1867 there were no public parks even though the urban area of Edo (now the city of Tokyo) had so many gardens that it was referred to as the Garden City. But nearly all these gardens were part of the estates owned by feudal lords and their retainers. Green, open areas available for use by the common people were limited to the grounds of temples and shrines and a few flower viewing spots established by the Shogun, Yoshimune Tokugawa. The Edo period also known as the Tokugawa period was the last period of traditional Japan. It lasted from 1603 to 1867. Although it was a military dictatorship or Shongonate founded by Tokugawa Ieyasu it was a time of internal peace, political stability and economic growth. That was, until its final thirty years when unrest was spreading throughout the country accompanied by a demand for the restoration of direct Imperial rule to unify the country and deal with the growing threat of Western encroachment. After the last Shogun was deposed the Meiji Emperor was restored to supreme power. During this period the imperial capital was relocated from Kyoto to the Shogun capital Edo. The new capital was re-named Tokyo. The new government embarked on a programme to break down the old feudal system and put in its place a prefecture system that is still in place today. It also introduced social reforms and a universal education. It was during this period that the government established Japan’s first public parks. By 1887 eighty-one parks had been created often based on earlier flower viewing spots and the grounds of temples and shrines. Shiba Park was created from the extensive grounds of the Zöjöji Temple. This park is very popular with the locals. 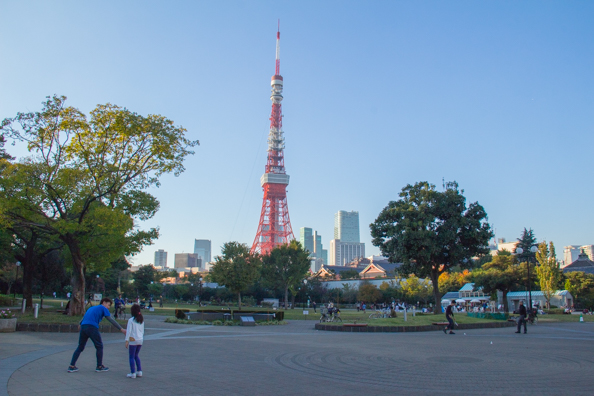 My wanderings took me into the temple complex. I did not enter through the front gate, Sangedatsumon. This wooden gate was built in 1622 and is the only architectural structure from the early days of the Edo period when the original temple was built. When I reached the gate crowds were pouring through the red-lacquered two-storey structure. I moved on and found my way inside through the much smaller Kuromon or Black Gate that looked a lot older than its more famous, bright red neighbour. 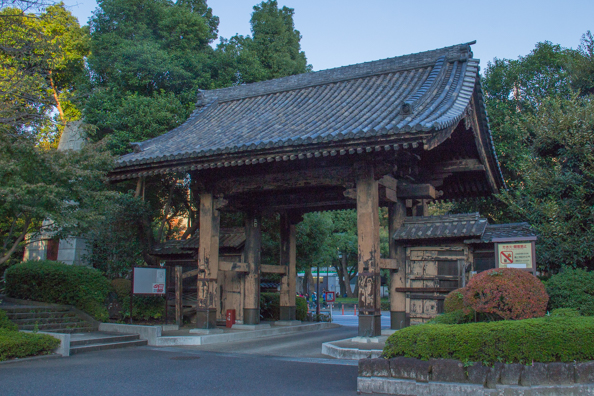 Zöjöji Temple was founded in 1393 as a seminary for Jodo shu in the Kanto (east Japan) region. Jōdo-shū also known as Jōdo Buddhism, is a branch of Pure Land Buddhism derived from the teachings of the Japanese ex-Tendai monk Hōnen. An image of the latter is found in Daiden, the hondo or main building of the temple. Zöjöji temple was relocated to its present site in 1598 by Ieyasu Tokugawa, founder of the Tokugawa shogunate when he entered Edo (present-day Tokyo) in 1590 to establish his provincial government. Zöjöji became the family temple of the Tokugawa family and an unparalleled grand cathedral was built. Zöjöji also served as an administrative centre to govern the religious studies and activities of Jodo shu. In those days, its precincts covered an area of 826,000 square meters which also contained 48 smaller attached temples and about 150 grammar schools. Moreover, as many as 3,000 priests and novices always resided here as students. When the Tokugawa shogunate ended and the Meiji Era started, this heralded the start of an anti-Buddhist movement. The cathedral, temples and the mausoleum of the Tokugawa family were then burned down by air raids during World War II. The cathedral and other structures were subsequently rebuilt and Zöjöji continues to serve as the main temple and seminary of Jodo shu. It is also very popular with the general public as both a grand Buddhist temple and a hub of religious and cultural activities. The exteriors of the buildings retain their traditional style but the interiors are refreshingly light and modern. 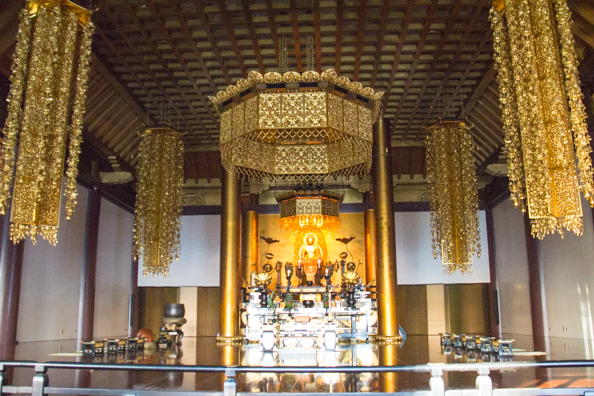 After exploring the interiors of the two main buildings, Daiden and Ankokuden I found some interesting monuments in the grounds. The first was a statue of the Japanese Buddhist goddess of mercy, Kannon. She helps people in distress and there are sculptures of this goddess all over Japan. She has even given her name to Canon, one of the largest companies in Japan. During the seventeenth century when Christianity was banned in Japan secret worshippers created sculptures of the Madonna with her child that looked like Kannon. 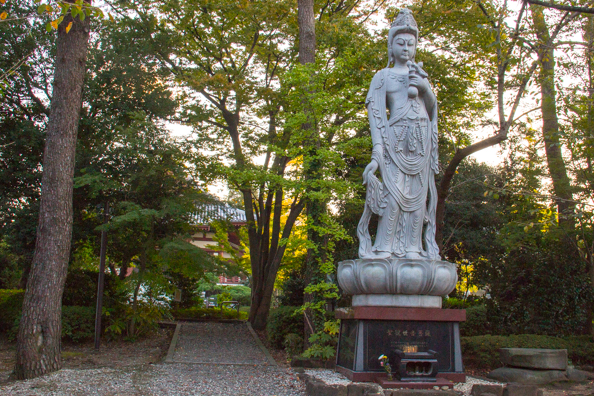 I also found Daibonsho a giant bell. This bell was completed (after at least seven castings) in 1673 and became renowned as one of the Three Great Bells of the Edo Period. The bell weighs fifteen tonnes and is rung twice a day, early morning and evening. It is tolled six times not only to chime the hour but also to purify one hundred and eight earthly passions (bonno) that lead people astray. 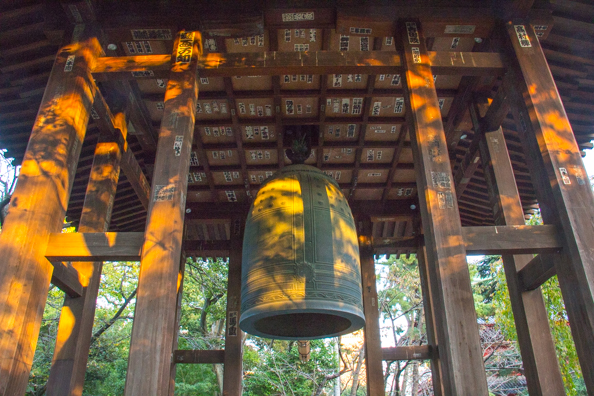 I was about to leave when I noticed line after line of tiny statues with red hats and bibs and ‘holding’ brightly coloured pinwheels that spin in the wind. These statues or Jizo are the bodhisattva of children and are in the grounds leading to the Tokugawa Cemetery, where six shoguns and their families are buried (not open to the public). According to Japanese Buddhism the Jizo is the divinity that is the guardian of unborn, aborted, miscarried, and stillborn babies; and also the patron saint of expectant mothers and children. For this reason, in Japan the bodhisattva, or the statue of the Jizo, are in the form of children and usually adorned in red caps and bibs. 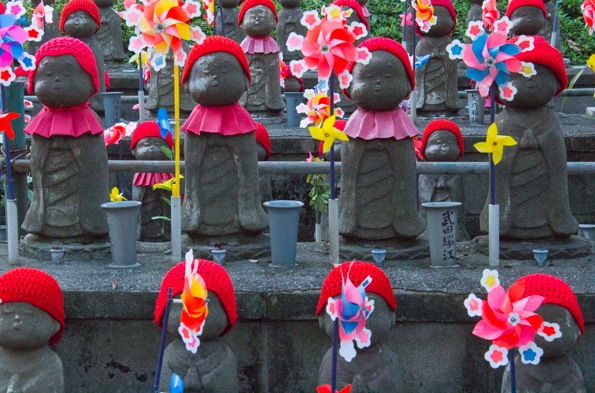 Dusk was falling by the time I had finished my exploration and I retreated to the local 7 Eleven where I bought a ready meal that was heated up for me so I could perch on a stool in the store to eat it. Open twenty-four hours, seven days a week these convenience stores and also the Family Mart are a real boon for the traveller on a shoe-string. They offer a wide variety of food at very reasonable prices. They also stock just about every item you might need – and it is fun trying to work out from the pictures exactly what each product is. They are everywhere and a convenient source of clean toilets. The 7 Elevens also have ATMs. During our stay in Japan a pre-paid IC card had been included in our package. It works like an Oyster Card and any money left over can be spent in either of these stores – an added bonus.