At Peace in a Park in Hiroshima

Stepping off the tram at the “Peace Park”:http://www.japan-guide.com/e/e3400.html in Hiroshima http://visithiroshima.net I had no idea what to expect, or even, why I was there. I was immediately struck by the stark reality of the disaster that struck the city on seeing the Atomic Dome (Genbaku Dome) with its shredded dome. It was the only building left standing when the first atomic bomb exploded in the centre of the town on 6 August 1945. This building, the Hiroshima Prefecture Commercial Exhibition Hall, has been preserved in the same state it was immediately after the bombing. The respectful silence of all the visitors surrounding it was very moving. 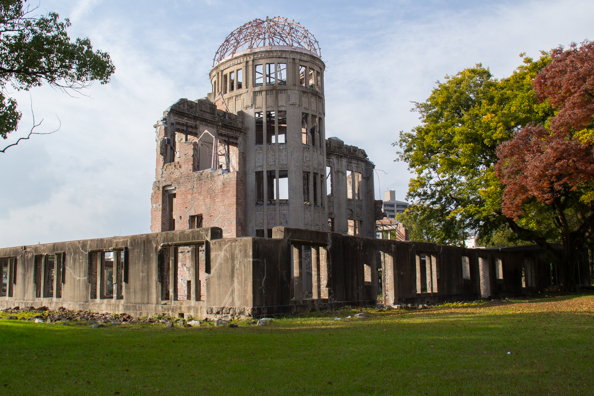 On the other side of the river the atmosphere in the Peace Park was completely different. This large wooded area is home to some interesting monuments each with its own poignant significance. The Children’s Monument was, appropriately, surrounded by school children learning the meaning of this unusual structure and the significance of the bell inside which is shaped like a crane. This bird, derived from the ancient Japanese tradition of origami (paper folding) has come to be known as a symbol of peace. Cranes are folded as a wish for peace around the world. The connection between paper cranes and peace can be traced back to a girl named Sadako Sasaki. At the age of two she was exposed to the A-bomb but at the time she had no apparent injuries. Nine years later she was diagnosed with leukaemia. She believed that folding cranes would aid her recovery and she kept folding them until she died eight months later. Her death sparked a campaign to build a memorial for all the children killed by the atomic bomb and a place to pray for world peace. It is both a sad and happy place – especially during school visits. Wave upon wave of children with their excited chatter and the bright coloured baseball caps (each school had a different colour) flooded past as I stood there. Standing still, I discovered, had its consequences. All the children had a project to do – ask visitors to the park to write a message about peace for them. For each message written the author was given a present which was a tiny origami crane stuck to a hand-made bookmark. It made my day. The children read their request in English – often punctuated by giggles – and when the gift had been present departed with a chorus of thanks and goodbyes. Their presence made my day. During my visit I collected seven presents which I will treasure. 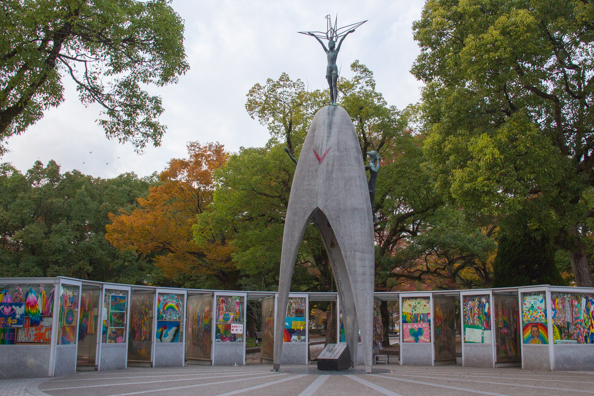 Moving on I stopped to watch some children ringing the Peace Bell. Not an easy task as it involved ramming the large bell with a wooden rod suspended next to it. On the surface of the bell is a world map without national boundaries symbolising one world. The ringing of the bell is an expression of hope for the abolition of atomic and hydrogen bombs. The bell is surrounded by a pond planted with lotus seeds. Every year on Peace Memorial Day these flowers are gloriously in bloom. They were planted to commemorate the fact that lotus leaves were placed on the burns of the victims to soothe them. I was later to learn that so great was the destruction of this city hardly any medical supplies were available to treat thousands of injured victims. 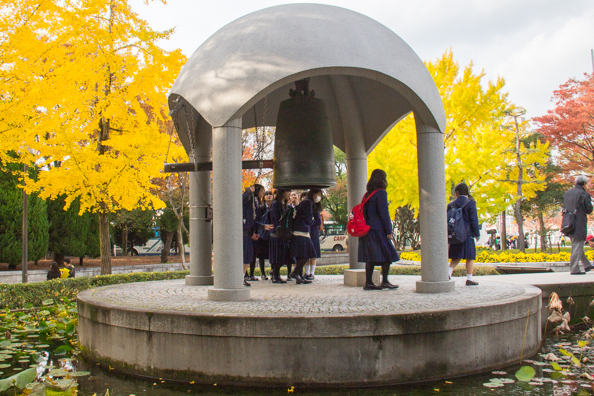 The clamour of the children became a murmur in the distance by the time I approached the main memorial, the Cenotaph and eternal flame. It is said that this flame will be extinguished when the last atomic bomb in the world has been destroyed. The arch of the cenotaph has been positioned so that the Atomic dome can be seen through it. Always there as a reminder. 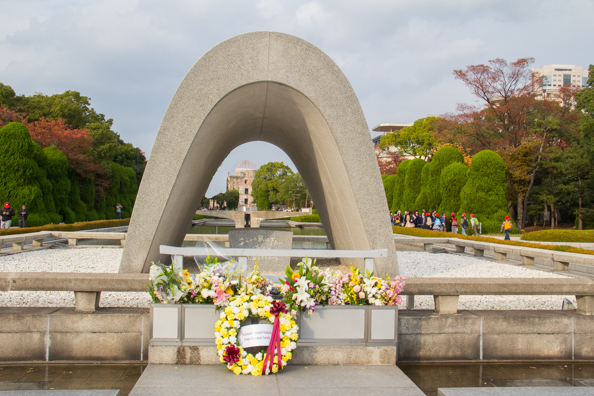 Close by the Cenotaph I discovered a Memorial to all the Koreans in the city who perished in the attack. Next to this memorial was the entrance to the Korean Memorial Hall. It is estimated that twenty thousand or more Koreans were killed in Hiroshima. Many Koreans were working in Hiroshima at the time including conscripts in the army as Japan was occupying Korea at the time. I followed the spiral of steps down to the hall. A large photo of the old city of Hiroshima was wrapped around the circular walls of this room. I spent some time there in contemplation and then moved on to an area where a video was showing. Survivors of the blast had recorded their recollections of that day. One recalled that she had been in school at the time and had escaped through a window and run to the bridge hoping to find refuge on the other side of the river. As she got near the bridge it burst into flames. Her teacher encouraged her to swim across the river and they made it and to safety. She was later found by her father who took her home. She survived but sadly her sister died in the blast. These personal memories were moving beyond tears. 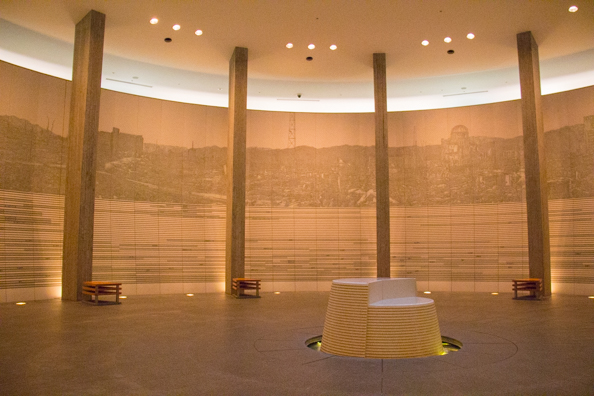 At the far end of the park is the Peace Museum that comprises two buildings. But as I approached hundreds of school children were lining up to go inside so I decided to move on. As I strolled down an avenue of trees I came across the Memorial Tower to the Mobilized Students . This monument was built to commemorate the students who had been mobilized to make up the labour shortage in Hiroshima. Many of these were killed by the bomb. This tower was built by the bereaved parents. 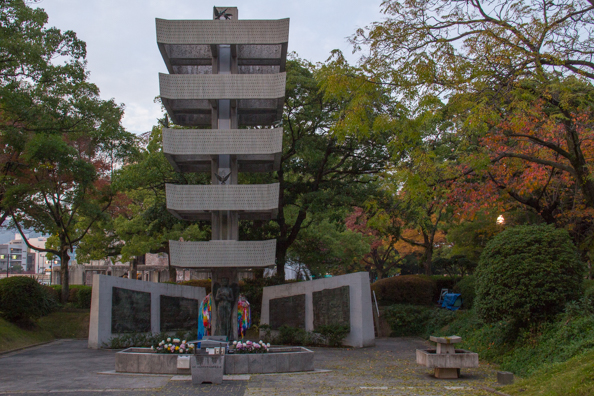 This beautiful park is well integrated with the new city of Hiroshima and has clearly become a place where local people come to relax on the benches under the trees now resplendent with their autumn foliage. My question had been answered regarding why I was there. Because we should all go there if we get the opportunity. 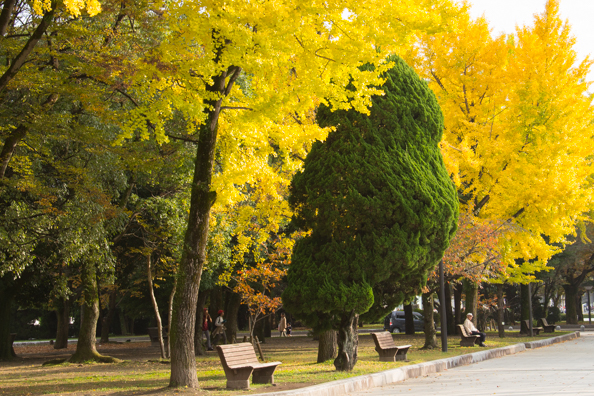 My JR Rail Pass got me all the way to Hiroshima there and all the way back from Kyoto where I was based on the Shinkansen (bullet train). Five companies run the Shinkansen or bullet train but the JR Rail Pass is only valid on three of these companies. The pass is not valid on services run by Nozomi and Mizuho. It is a fifteen-minute journey by tram, number 2 or 6, from Hiroshima station. The trams themselves are an interesting mixture of very old and ultra-modern. This is because when Hiroshima was re-buidlng the city other Japanese cities were abandoning their trams and gave them to Hiroshima. Passengers get on the tram without paying and then pay when they get off. It is a set fare of 160 yen.