There was an air of anticipation as we crossed the narrow channel of water between Hiroshima port and Miyajima Island. Everyone was craning their necks for the first view of the torii gate of the famous Itsukushima shrine. A veil of mist draping the island enhanced the moment as we drew closer to the red gates that really does appear to be floating on the sea. Sadly, it is no longer a requirement to enter shrine island through this gate and we had to disembark at the ferry port. 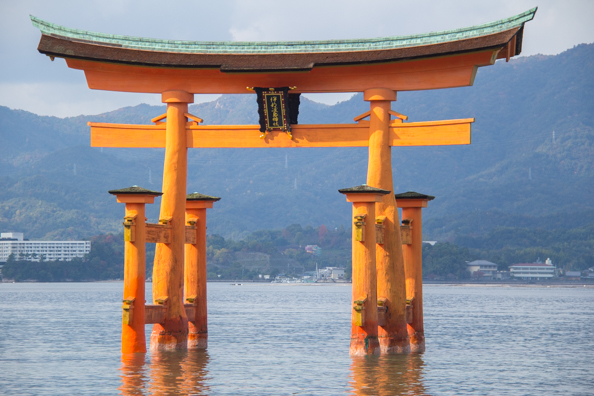 I collected a map from the Information Point inside the terminal and was disappointed to see a sign indicating that the Itsukushima-shrine was closed. I asked the lady behind the desk and she assured me this was just a temporary closure due to the high tide and it would be open in an hour. She gave me a map in English, marked the most interesting places to visit close to the port and I set off to explore. I knew I would not have time follow one of the walking routes on the map. My route took me past the Itsukushima-shrine and I paused for a while to watch some frantic brushing of salty water back into the sea. 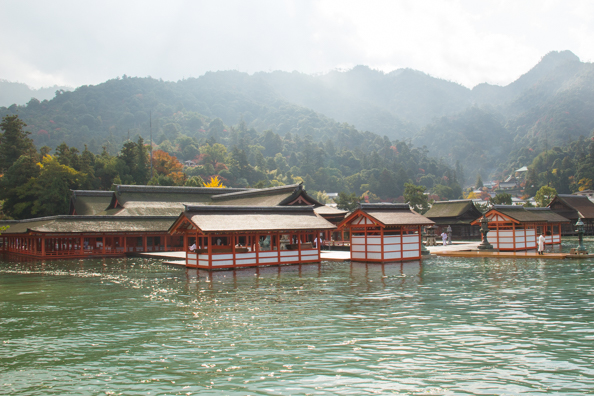 There was a long queue to enter the shrine so I just did a circuit to see the buildings surrounded by sea water and linked by walkways. My intention was to return later. I had noticed a priest in his official robes which suggested a ceremony, probably a baptism or a wedding, would be taking place that morning so it may not be a good day to visit anyway. The exterior was beautiful – the orange and white buildings mirrored in the water that surrounded them. 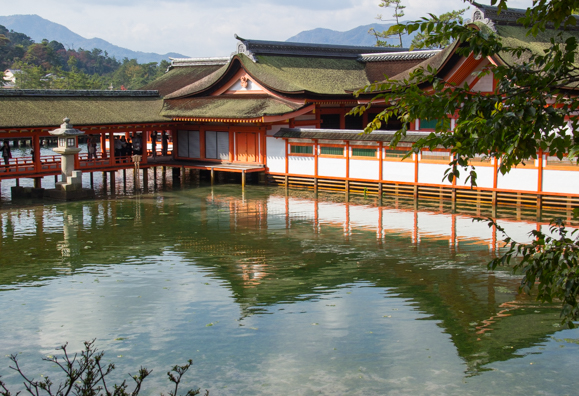 On my way through the small town I passed a narrow shopping street lined with traditional buildings. I could not resist the temptation for some browsing. 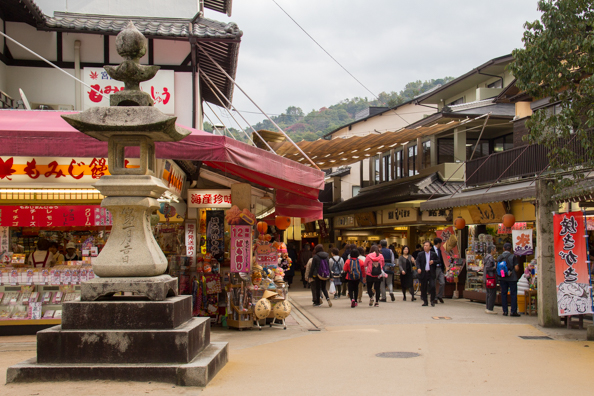 Most of the shops featured displays of the momiji manju There are at least two stories regarding the origin of this pretty pastry. According to one account it was created over a hundred years ago when the manager of a Ryokan (Japanese style inn) on the island asked a Japanese pastry chef to make something special for Miyajima. Another story relates to an occasion when Hirobumi Ito, https://www.britannica.com/biography/Ito-Hirobumi then Prime Minister of Japan, visited the island during the Meiji period. http://www.japan-guide.com/e/e2130.html Apparently, while looking at the lovely hands of a girl working in a tea house he joked how tasty it would be to eat baked sweets shaped like maple leaves. The idea was taken up by the manager of the tea house who heard this comment and she based the shape on fallen leaves from the maple trees on the island. Since then research and refinement have resulted in a special sweet produced by around twenty companies on the island, each with different characteristics. Although the most common filling is smooth red bean paste there are many flavours to choose from including chocolate and custard. I did not have time to try them all but paused long enough to sample one. Each little piece of this pastry was carefully wrapped in cellophane – I had come to appreciate the care and precision that goes into the presentation of food in Japan. 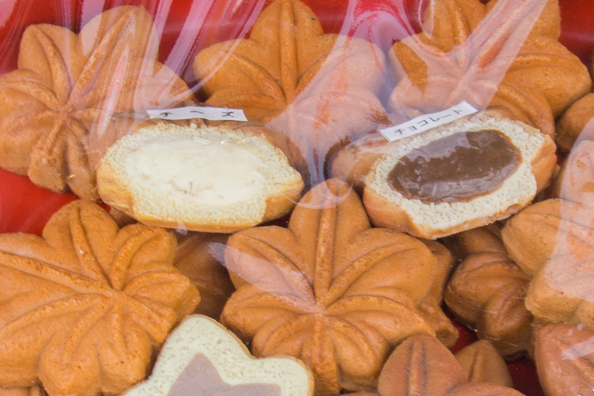 I moved on to the Toyokuni Shrine also known as Senjokaku. The name means hall of one thousand tatami mats the traditional floor covering used in homes, restaurants, temples and even boats in Japan. Shoes have to be removed before walking on these mats. This shrine was built five-hundred years ago and dedicated to Toyotomi Hideyoshi, one of the three unifiers of Japan during the sixteenth century. It was intended to incorporate a Buddhist library in this shrine but it was never finished and remains in this state. It is the largest structure on the island and its elevated position makes it popular with visitors who can sit on the steps in the shade of the building enjoying the views over the island. 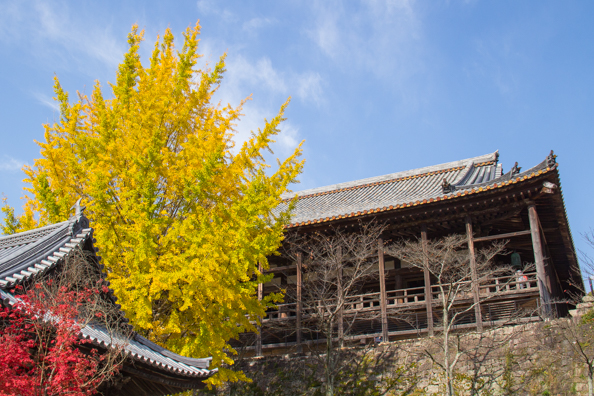 Next to Senjokaku is the Five Storied Pagoda, also known as Goju-no-to. The pagoda was built in 1407 and restored in 1533. It enshrined the Buddha of Medicine and the Buddhist saints Fugen and Monju but their images were removed in the early Meiji period. These are now enshrined in the Daiganji Temple, also on the island. This pagoda, built in the Japanese style but displaying some Chinese influence, this structure is only one of five of its type in Japan. It was restored to its original style in 1945 by coating it with red lacquer. 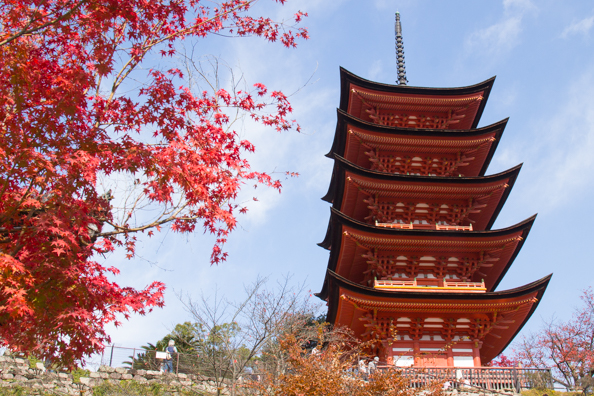 I moved on to Momijidani (Maple) Park. I had already met some of the deer that live in this park. They come down to the waterfront seeking tourists who are eating and then head but them in an attempt to share their food. Fortunately, their horns have been polled. Some of them were enjoying the tranquillity of the park – and haunting the open-air restaurant. 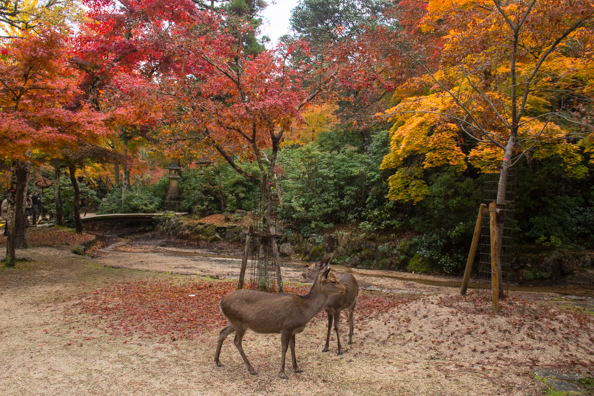 The park was beautiful, criss-crossed by paths with the occasional red bridge crossing the Momijidani River that runs alongside it. These paths lead up to the aerial ropeway station to go to the top of Misen Mountain and signs tell the visitor how long it will take to walk to the cable car and also the time if you run. I was almost at the bottom of the cable car when I discovered that tickets have to be bought before entering the park. As I re-traced my steps I found the ticket office near the stop for the free shuttle bus that would have whizzed me up there. It was not a problem as I had enjoyed exploring on foot. 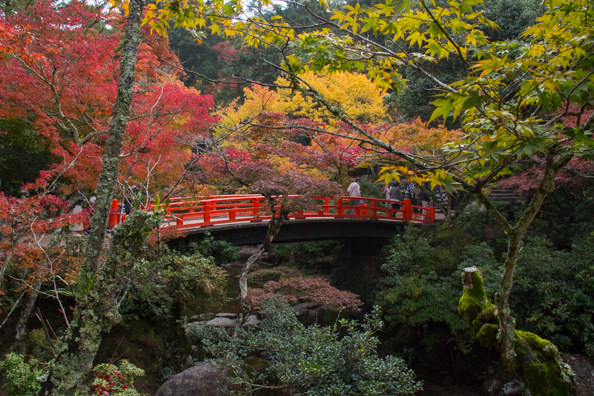 As I strolled back to the ferry port I discovered another local delicacy in a row of stalls along the sea front selling baked oyster dishes. The deep fried bread roll filled with curry and baked oyster pieces was delicious. We had seen the oyster beds from the ferry and I was glad of this opportunity to try something so typical of the region. Oyster farming has been practised from the island for about three hundred and thirty years. They hold an oyster festival there every February. 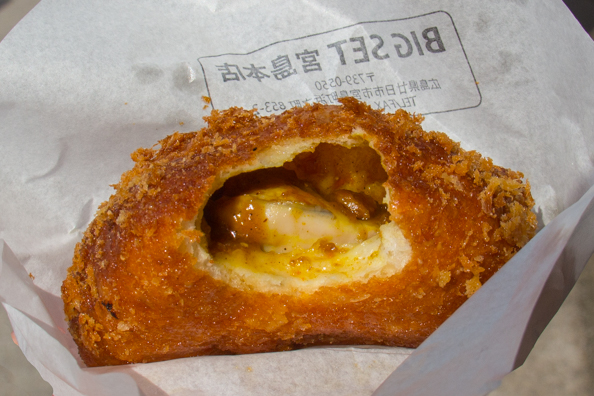 I was not bothered by any deer as I strolled along the promenade munching my bun. They were replete with visitor’s snacks and sleeping it off. 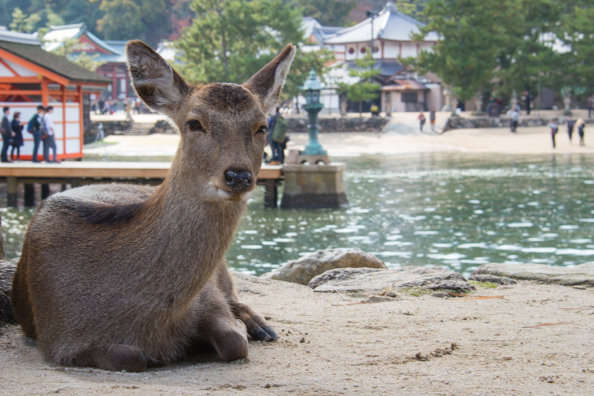 My JR Rail Pass got me all the way there and all the way back from Kyoto where I was based on the Shinkansen (bullet train), local train and JR ferry. Five companies run the Shinkansen or bullet train but the JR Rail Pass is only valid on three of these companies. The pass is not valid on services run by Nozomi and Mizuho. I had to study the train timetable carefully to make sure I used the right train. If any part of my journey was covered by a train not covered by the pass I would have to pay for the whole journey which would be very expensive. There was a train to Hiroshima from Kyoto where I was staying, at 07:20 which was perfect and one back at 19:03 – also good timing. Outbound the train was direct and the inbound involved one change but only a ten-minute wait. Two days earlier I had reserved seats on all the trains I was using at the JR office in the station. 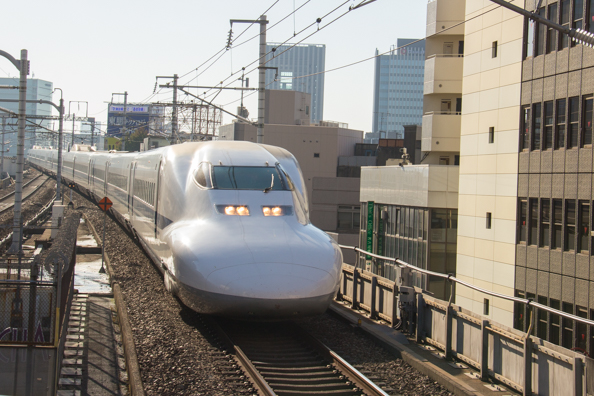 My journey was very pleasant as the seats were comfortable and constant announcements and screens in each carriage kept me informed regarding the progress of my journey. There was a refreshment trolley on the trains but I had already eaten well in a rustic restaurant at the station – baked oysters, ginger pork, boiled rice and miso soup.