Matsumoto - A Taste of Traditional Japan

Matsumoto, in Japan, is a beautiful blend of ancient and modern. Strolling down the modern main streets I realised something was missing. The street lighting is not fuelled by an intricate web of overhead power lines as they are in every other city I had visited. The local authority passed an edict that the power lines should be underground and their disappearance has certainly enhanced the beauty of this town and given it a crisp, clean and modern appearance. 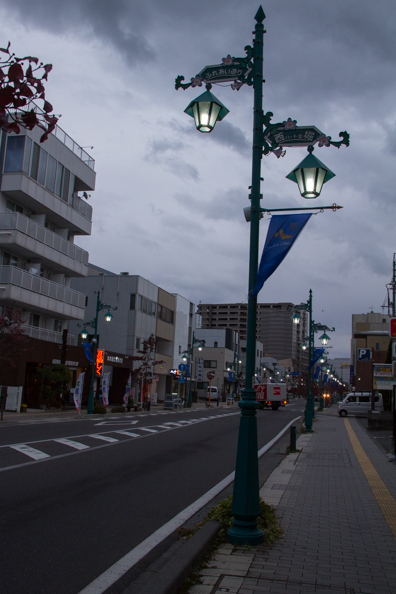 But, turn down a side street and some traditional treasures await. Close to the railway station I spotted the bright red Shinto poles of the Jorinji shrine. I was drawn inside this attractive little shrine. This shrine is sited in a complex that includes a temple. The complex is notable because its wooden gate is the oldest gate in Matsumoto. The gate was built during the Edo period between 1688 and 1704 and is decorated with many beautiful carvings by the famous craftsman Yutenjidainisei Yukaijoto. The shrine was built by Lord Ogasawara in the mid-sixteenth century and over the centuries has been protected by many important people. When the upkeep became too cumbersome during 1872 (Meiji 5) but was recently re-opened. 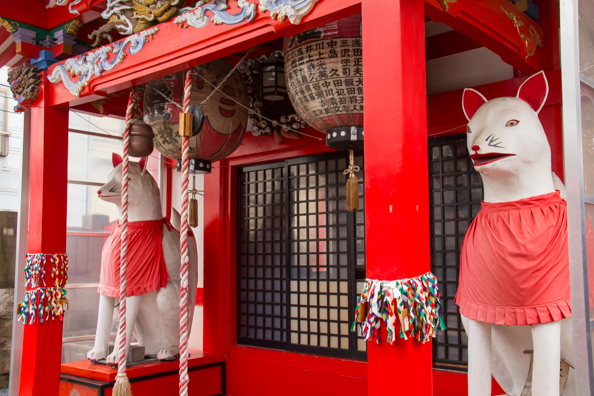 The main courtyard of this complex leads into a beautiful garden that features moss paths and water cascading over rocks and running between trees. A lovely place to linger for a while. 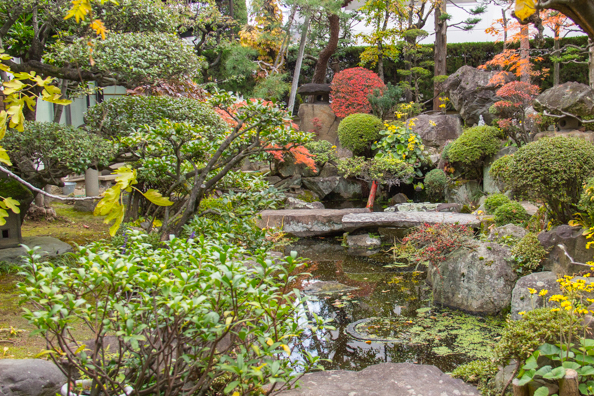 Moving on, towards Matsumoto Castle, the most famous site in this town an extraordinary monument will distract you as you puzzle over its significance. This monument is at the entrance to Nawate-dori also known as frog street as the theme of this street is frogs. There are several frog statues in the vicinity but this is the most spectacular. Made from fibreglass by the students of the Tokyo University for Arts it represents two fearsome frogs fighting with katana (a Samurai sword). 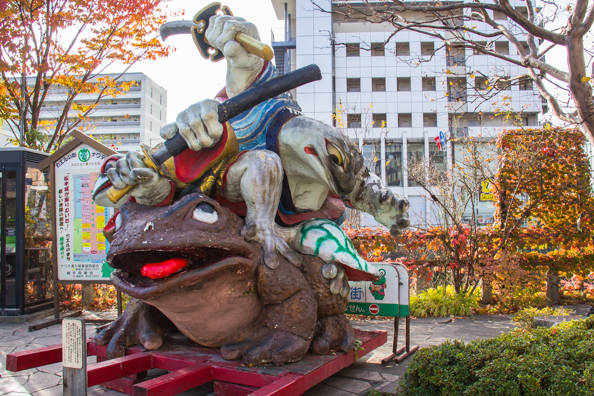 Nawate-dori, is also famous for its shops and frog-themed products are abundant in the shops that line this narrow thoroughfare. Running alongside the Metoba-gawa River this street was once the border between the commoner houses and Samurai residences. Crossing the bridge to enter the Samurai district there is a lovely view of the traditional buildings on Nawate-Dori. 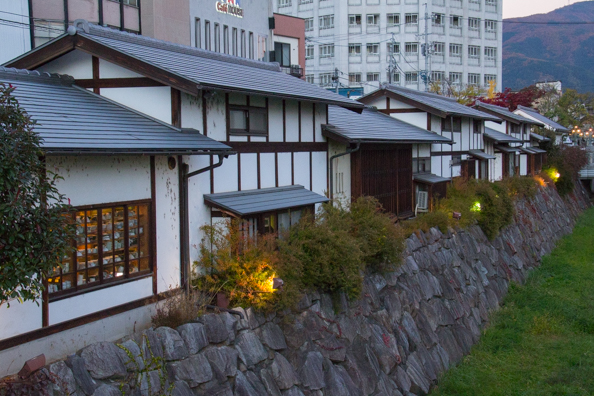 The buildings along Nachamachi-dori St have been restored in their original style, Samurai merchant houses, and offer plenty of browsing and eating opportunities. One of the more interesting buildings is the old-fashioned warehouse. These black and white buildings, sometime very small, have four-walls as can be seen by the thickness of open doors and shutters. This is where valuable items would have been stored. 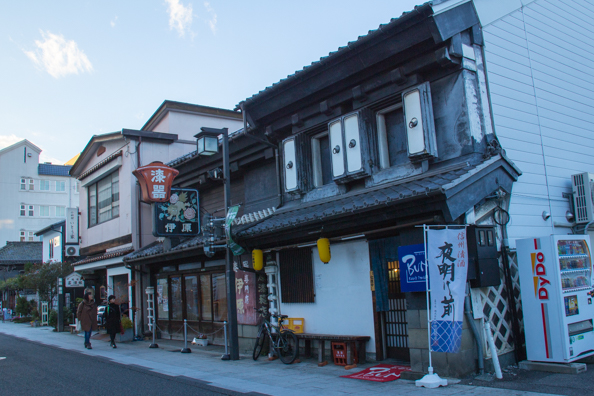 Attracted by the beautiful foliage on some trees I wandered through a large, grey gate and into the lovely grounds that surround the Yohashira Shrine. It was festooned with red flags in celebration of Shichi-Go-San on 15 November. Shichi-Go-San means 7-5-3 and on this national gala day boys aged three and five and girls aged three and seven are taken by their parent to the local Shinto shrine. Traditionally girls wear kimonos and the boys wear haori jackets and hakama trousers. But recently there has been a tendency for the children to wear Western-style dresses and suits. At the shrine prayers are offered for a healthy and happy future for the children. 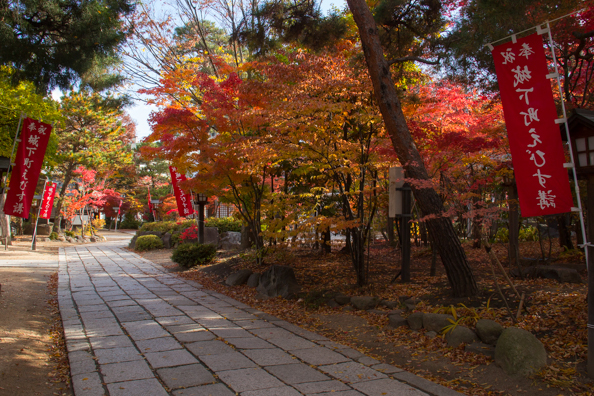 The most important attraction in Matsumoto is its castle standing proudly above the moat that surrounds it. This castle is one of only four remaining original castles in Japan and considered to be the most beautiful and complete. Its predominantly black exterior has led to it being called the Black Crow. It is a “hirajiro” castle meaning it was built on plains rather than on a hill or mountain. 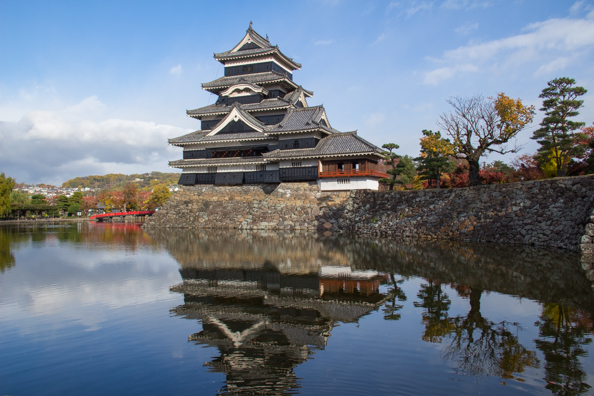 The castle is a popular in the spring when the hundreds of somei yoshino cherry trees planted along the outer castle moat are in bloom. In the autumn the foliage of the trees around the castle turn beautiful shades of red, orange and yellow. 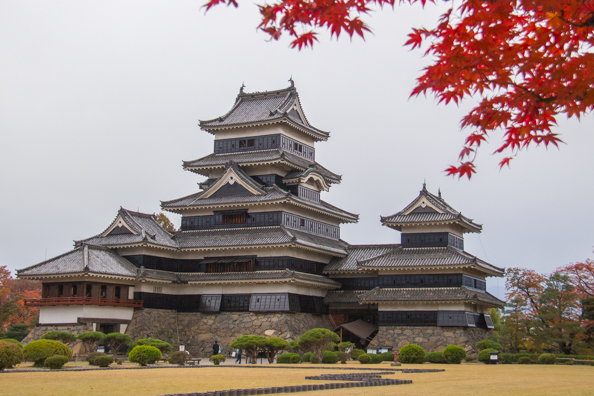 To enter the castle visitors must take their shoes off ready to face some challenging staircases. On such occasions non-slip socks are very useful. To obstruct possible enemy incursions the numerous staircases are not one above the other but on opposite sides of each of the six floors. These staircases vary in steepness and width – some barely allow two people to pass each other. On some, if you are not careful you may tangle with the low hanging beams and on others the depth of the steps may prove challenging. 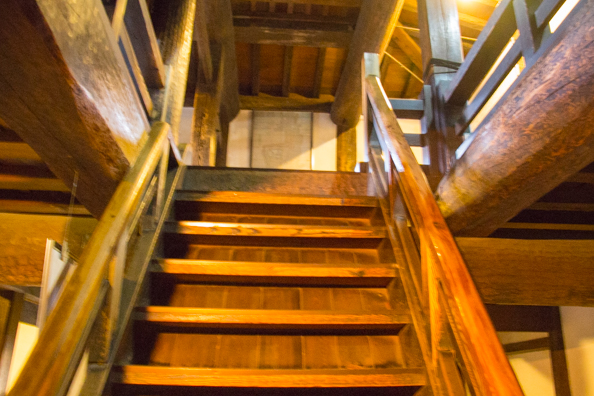 But the climb to the top is worth the effort. Each floor had a different purpose as explained by information boards on your way. A good example is the contrast between the third and fourth floors. The third floor is very dark whereas the fourth floor is very bright. This is because the third floor was used as a meeting place for the warriors and it was hidden from outside. The fourth floor was where the lord lived and is therefore full of light and very spacious. The second floor is home to the Matsumoto Castle Gun Museum. As well as a collection of guns from the period when the castle was defended (1592 to 1635) this museum also features a complete set of armour. 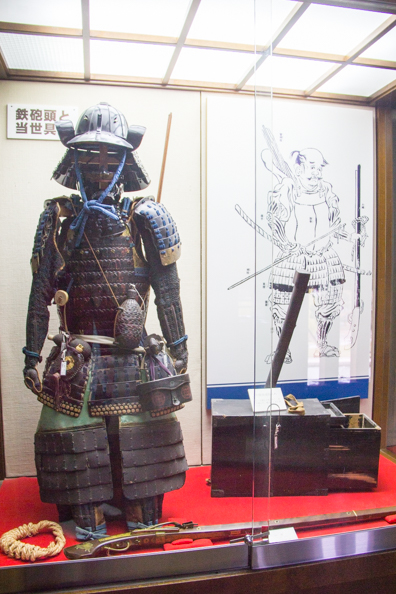 On the way to the observation on the sixth floor the openings in the walls that were once used to drop stones on invaders or by the archers to fire their arrows now provide opportunities to view the grounds below and the details on the rooves of the different sections of the castle – the main keep and a second, smaller keep. When the threat of invasion ended in 1635 the third turret and fourth turrets were added – the last to be used for moon viewing. One detail of the roof is the killer whale an imaginary fish that discharges water should the castle every catch fire and a common roof decoration in Japan. There are male and female versions. The male has his mouth open and the female, slightly smaller, has its mouth closed. Those in place now are replicas as one of the originals is in the museum. 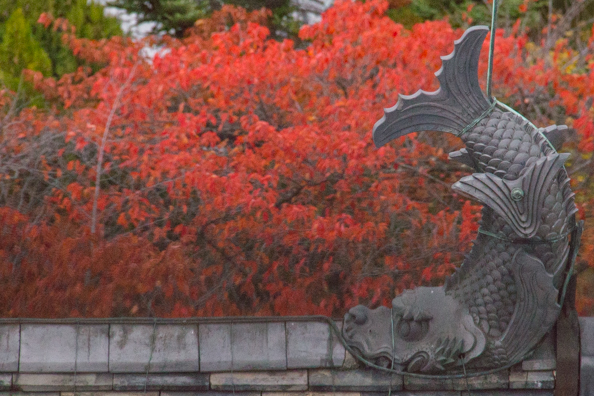 .
From the observation platform at the top the visitor has a good view of the area surrounding the castle including the red bridge that gave access to the castle across its moat. This bridge, although it would be the first thing to be destroyed, was built with great attention to detail and features traditional giboshi ornaments. These black, bulbous ornaments represent a houju which is a Buddhist sacred gem that makes wishes come true and wards off evil spirits. 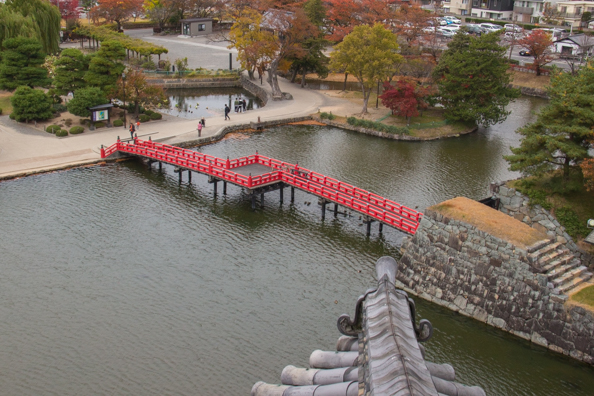 Downtown on Isemachi Street the giant karakuri clock was about to strike the hour. This modern creation has a traditional theme as the large globe represents a Matsumoto-temari. A temari is a folkcraft ball decorated using scraps of yarn from weaving to create various designs. In the past, the balls were used as children’s o-tedama (beanbags). When a way was found to make them bounce they became known as temari or handballs. Some of these balls now have bells inside them that make a lovely sound when the ball is bounced. They are also used for interior decorations as they are considered to be good luck charms. It is over two hundred years since a wife of the ruling Matsumoto Clan nobility created the first ‘temari’ handball. The temari is also featured when the global clock opens up to reveal mechanical girls, the karakuri, playing with them (see opening image in this post). The globe closes and then opens again and this time the mechanical dolls are boys playing musical instruments. 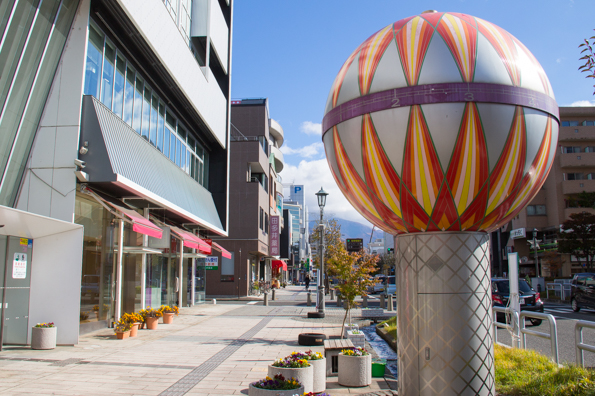 The temari are also celebrated in plaques regularly featured on the pavements of Matsumoto – another taste of traditional Japan. 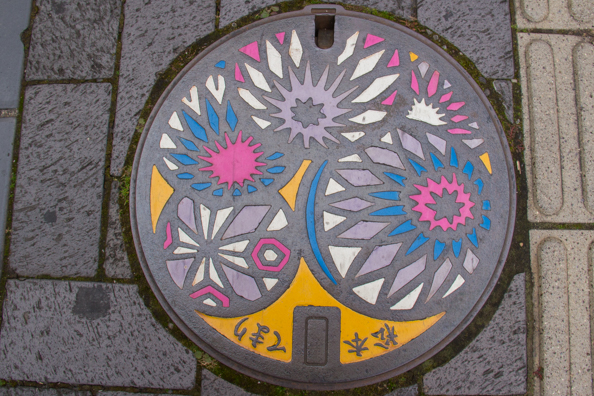