Corfu - A Tale of Two Fortresses

It seemed like such a simple plan at the time. Catch the local bus into Corfu town or Kerkyra and make my way to one of the two fortresses I had seen from the ferry when I arrived on the island of Corfu . I knew very little about the island or its main town as my visit was unexpected – I was on my way home from Albania. I did know the old town is a UNESCO World Heritage Site and that it is strategically located at the entrance to the Adriatic Sea. For this reason, the Venetians used the island for four centuries to defend the trade routes of the Republic of Venice against the Ottoman Empire. The Venetians not only constructed defensive forts but they also built houses in the old town. The Venetians ruled the island for four centuries, until the French took possession at the beginning of the nineteenth century. After the French there was a period of British occupation until Corfu and the other Ionian Islands became part of Greece. 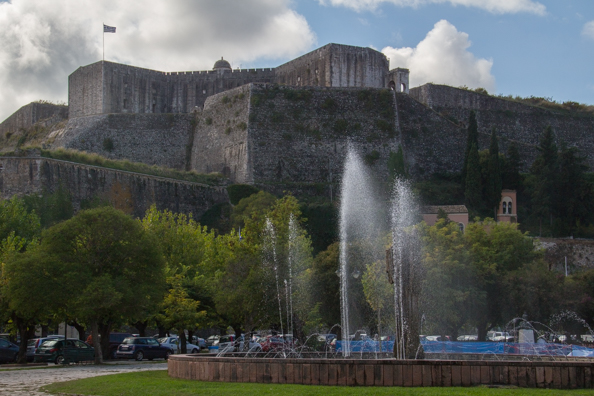 There was only one drawback to my plan. When I got off the bus in Plateia Georgiou Theotoki (San Rocco Square) I had no idea which direction to take. I walked along Georgiou Theotoki street thinking that would take me in the right direction. Instead it led me to an unusual monument dedicated to Kostas Georgakis. Georgakis was a Corfu student studying geology in Italy. In September 1970 he set himself alight in Genova as a protest against the Greek military dictatorship. At the time, his death caused a sensation in Greece and later the Municipality of Corfu commissioned Dimitris Korres to create a memorial in his honour. 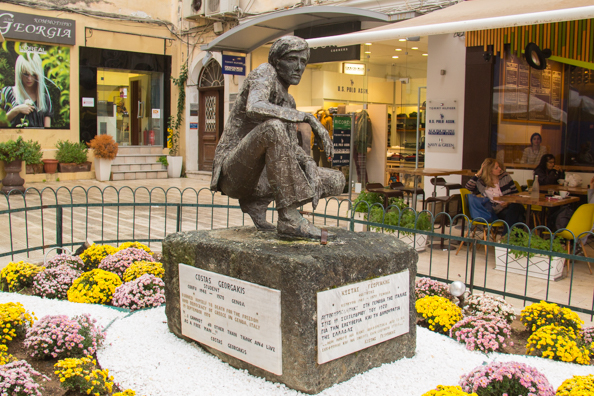 I was ready for a coffee by the time I emerged in the neo-classical Dimarchio Square. It was very pleasant sitting there identifying the buildings ringing the paved area where my table was positioned. On one side of me was the Catholic Cathedral dedicated to San Giacomo (Saint James). The town’s original cathedral was inside the Old Fortress but in the sixteenth century it was replaced by one in the old town. This cathedral was destroyed during the Second World War and then rebuilt in 1970 – an elegant building with three naves and a gothic tower. 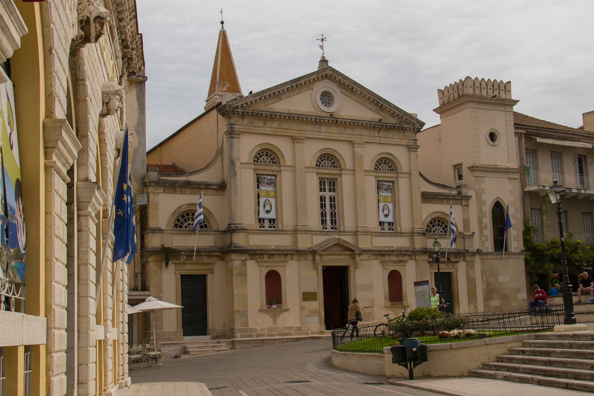 The Town Hall at the far end of the square has an interesting history having been used for a variety of purposes. The building was the first theatre not just in Corfu but in Greece. It was named “Nobile Teatro di San Giacomo” as it was situated at the square next to the Catholic Cathedral San Giacomo. When construction of this Venetian building began in 1663 it was intended to be used as a club for the nobility. In 1720 it was converted into a theatre and from 1733 to 1893 it operated as the first Greek Opera House staying some legendary productions. In 1903 it became a Town Hall. Sadly, it was damaged during the Second World War but has since been renovated and restored to its former glory. 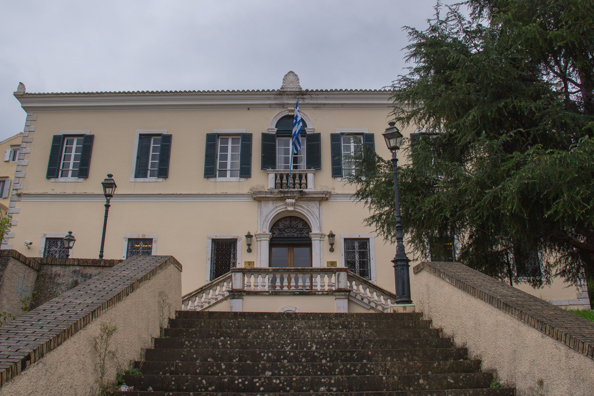 Around the corner from the Town Hall I stumbled on a pretty, colonnaded neoclassical building constructed by Ioanni Chroni in1855 and once home to the Ionian Parliament. In this building, in 1863, the Ionian Islands voted to become part of Greece, freeing them from British rule. Now redundant the building was turned into an Anglican Church but was damaged by German and Italian bombs in 1943. It was restored in 1962 and now hosts exhibitions and cultural events. 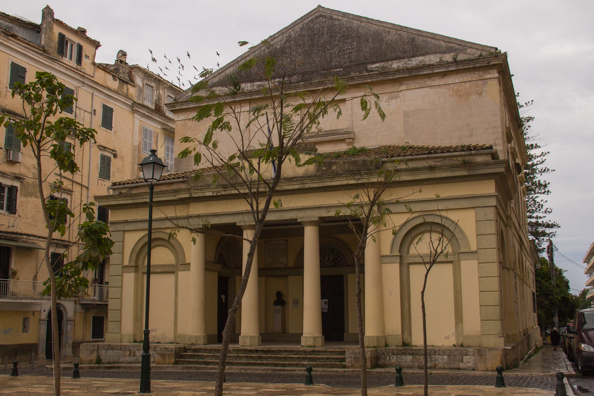 I resumed my search for a Venetian Fortress, took another wrong turn and a detour through the daily fruit and vegetable market. Chestnuts and almonds were heaped on some of the stalls and freshly picked pomegranates on others. All the fresh produce looked really tempting – but no time to shop now. 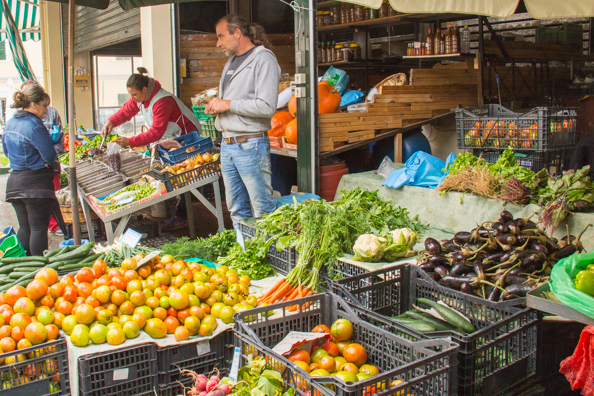 Emerging on the far side of the market I was facing the city walls. I could see the winged Lion of Venice embossed on a plaque set into the brickwork so I knew it was a Venetian building. But I could not see an entrance just a wall that seemed to go on forever. I decided to re-trace my steps and as soon as I set off again I noticed a sign to the New Fortress pointing straight into a car park on wasteland below the walls. I decided to trust it and set off in that direction. In the corner of the car park, hidden by a curve in the walls was an archway the led into a short tunnel at the end of which was a gate leading into an external courtyard of the New Fortress. The ticket booth was closed and the place was deserted so I wondered if I should be there. Two more people wandered in behind me and I followed them into the fortress itself. 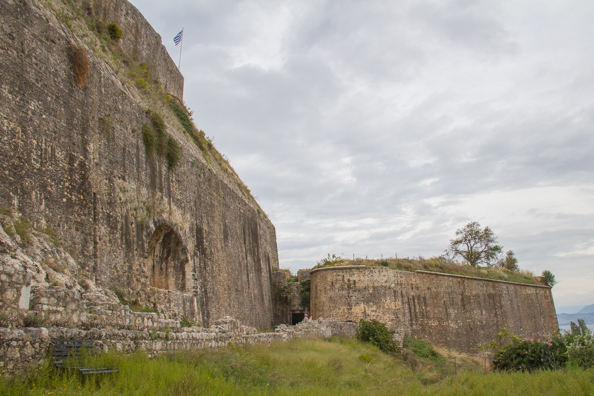 The Venetians built this second fortress, on top of Saint Mark’s Hill in 1577. Three hundred years later it was completed and improved by the French and the British. This ‘new’ fortress was built on two levels and included barracks and an impressive nineteenth century building that is now used as a Naval Base. Visitors are free to wander at will and I made my way to the second level, the level that was built to protect the city. From there I had good views of the city below me and in particular the Old Port. The lower level of the New Fortress was built to protect the port. It achieved its objective so successfully it was considered to be an architectural miracle and guardian of the freedom of the Western world. 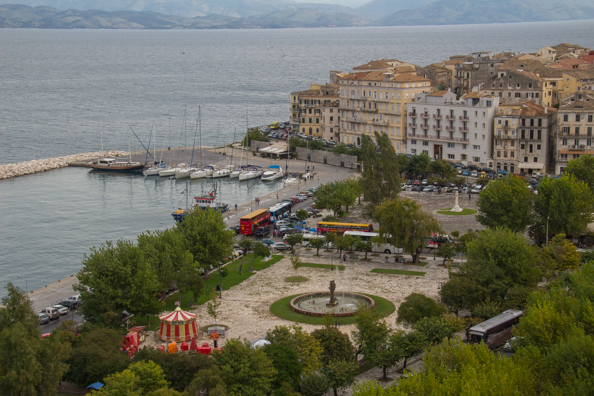 The Old Fortress would be my next objective but first I needed some lunch. I made my way back into the centre of the old town where I spotted a side street lined with small tavernas. They all claimed to provide fresh, home-cooked dishes. The one I chose, mainly due to the friendly welcome of the young waitress certainly lived up to its claim. My slow-cooked pork melted in my mouth. Refreshed I was ready to continue my exploration. Walking towards the Old Fortress I passed three other highlights of the old town. When Corfu Town was fortified by the Venetians eight gates connected the town inside the walls with the sea, the suburbs and the countryside. Of the four most important gates only two have been preserved. The second largest of these, Porta S. Nicolo, was joined to the Venetian Military Hospital. Today it gives access from the town to the sea front. 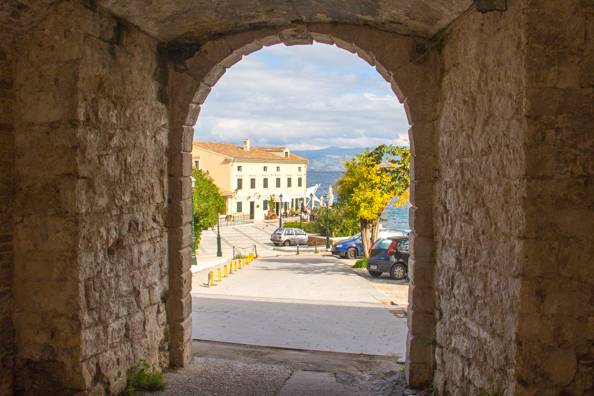 The former Royal Palace also known as the Palace of Saint Michael and Saint George is now home to the Asian Art Museum. This Neoclassical mansion was built for the British Lord High Commissioner in 1816. It was abandoned in 1864 when the British left the island. There is a café in the courtyard in front of this building with stunning views across the sea channel to Albania. The bronze statue by Pavlos Prosalentis that graces this area is Lord Frederick Adam, a well-known English Commissioner, who was responsible for some important technical improvements in the city including an aqueduct. Sadly, I did not have to go around the museum. 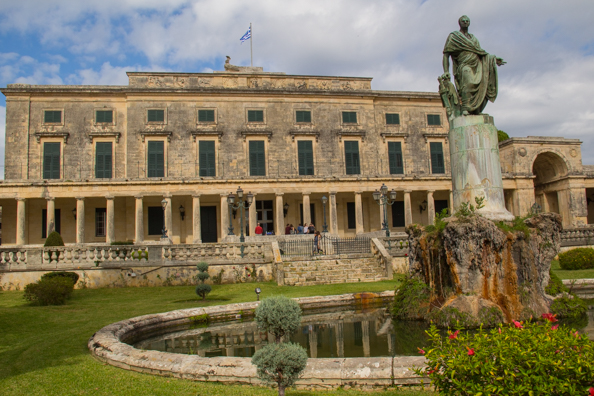 But I did have time to walk along the Liston, a long building with beautiful vaulted galleries, archways and hanging lanterns. Designed by the French Engineer Lesseps it was built in 1807 when the French ruled the island. The Liston is a miniature copy of the rue de Rivoli in Paris. Initially only the noblemen, the Libro D’ Oro, were allowed to walk under the arches and to do so they had to be named on a special list. It is more than likely that the name Liston comes from the Venetian word ‘lista’ which means ‘a wide and straight road for a walk’ and also ‘a wooden bench on which catalogues were inscribed’ in other words the list of names. Coffee shops and restaurants line the Liston which is a popular meeting place for locals and tourists. 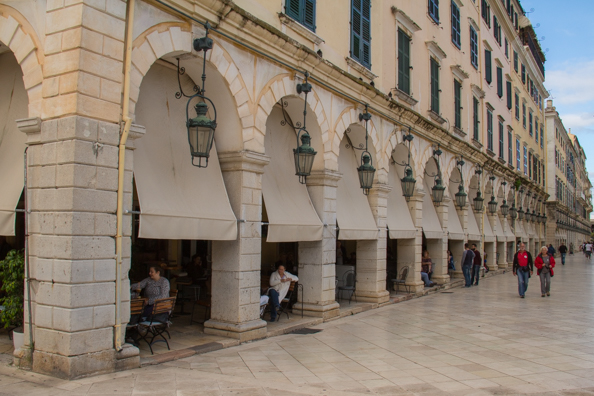 At the far end of the Liston is the Esplanade also known as Spianada the biggest and liveliest square in Greece. Although it is not really a square. The name originates from Italian word “Spianare” meaning “to flatten”. Because the Venetians were concerned that any buildings outside there fortresses were vulnerable to attack the area was cleared and reserved for military activities. Now this area is a lively part of city life, a place for recreation and the staging of important events. It also gives access to the town’s biggest fortress, the Old Fortress. 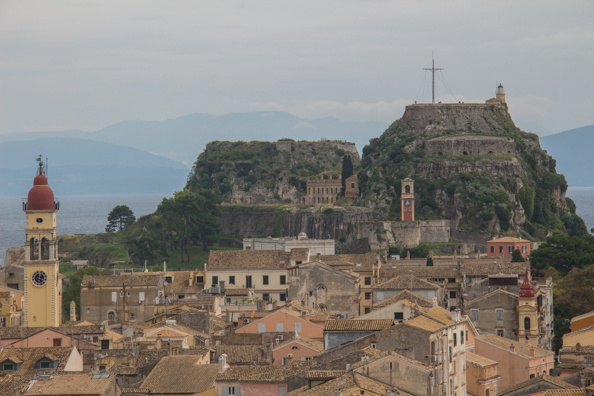 The entrance to the Old Fortress was a complete contrast to the New Fortress. The ticket office was doing a brisk trade and steady stream of visitors was crossing the bridge over the moat to the main entrance. The fortress occupies two peaks and the original fort included residential buildings as well as barracks. None of these Venetian buildings have survived and the present fort comprises buildings constructed during the British occupation. There is a lot to see including a museum and the views from the two peaks. 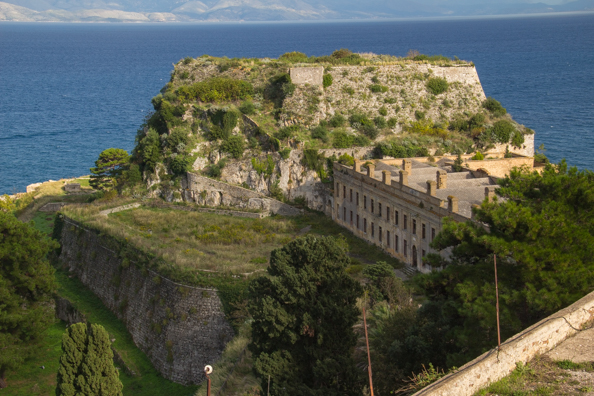 When I finally left the Old Fortress I walked back to San Rocco Square through the Jewish Quarter. Its narrow streets are lined with shops but I had no time to browse, tempting though it was. Corfu town had been a revelation. I had had no idea there was so much to see and do.