Vlora on the Albanian Riviera

Vlora (also spelt Vlorë) resembles a butterfly emerging from the Communist chrysalis that enveloped Albania until 1991. Ideally situated on a stunning coastline Vlora is the second largest port in Albania. Its seafront has already been transformed into an open area surrounded by bars. 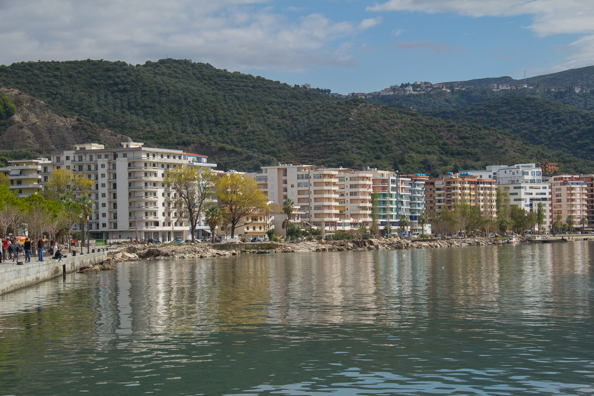 Vlora has had plenty to celebrate in the past. It was the first Albanian town to celebrate independence from the Ottoman Empire in 1912. It was here that Ismail Qemali raised the ‘new’ flag of Albania – double headed eagle on a red background. And it was here that Ismail Qemali served as Albania’s first prime minister in a nineteenth century building that is now the National Museum of Independence commemorating Albania’s independence. Qemali’s reign as Prime Minister may have been brief but his spirit lives on in Vlora. His office has been preserved in the museum. His name has been given to the main boulevard that stretches from the sea front to the centre of town. 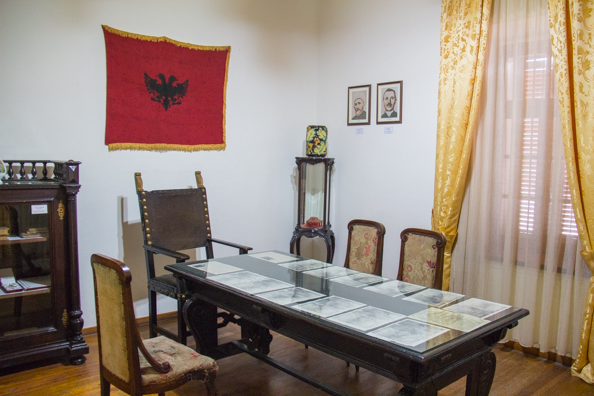 Ismail Qemali Boulevard straddles two eras as modern buildings, shops and cafes line one side but opposite them are the drab blocks from the Communist era. Efforts are being made to brighten them up with colourful murals and small, green parks provide places of rest and refreshment for the locals. The local men that is. Traditionally Albanian men meet to drink coffee and chat. This is an activity that can take several hours. Meanwhile the women are at work either in the home or on the streets selling anything they can find to sell. The brilliant hues of fresh produce provide a sharp contrast with the black garb of women over sixty. Tradition dictates this is the colour widows must wear once they reach the age of sixty. Male widowers can wear what they like whatever age they are. 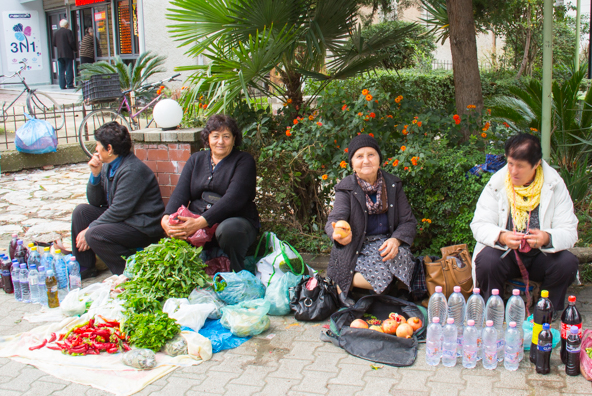 Take a trip down memory lane in the lovely old-fashioned fairground half-way along the boulevard. It will bring a smile to you face and show you another side of this town of contrasts. A vintage Ferris wheel is the centre-piece. 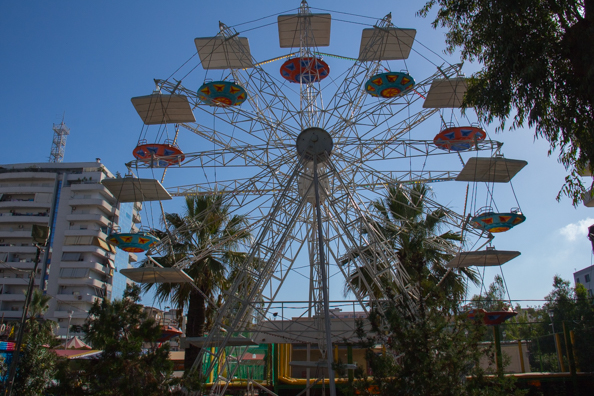 I was surprised to see a modern red and white building that houses the Petro Marko theatre. Named after a famous local play writer. It did seem out of context but not only is it real it also has a good reputation within and outside Albania. It’s theatre company often performs at prestigious theatre festivals in Italy. 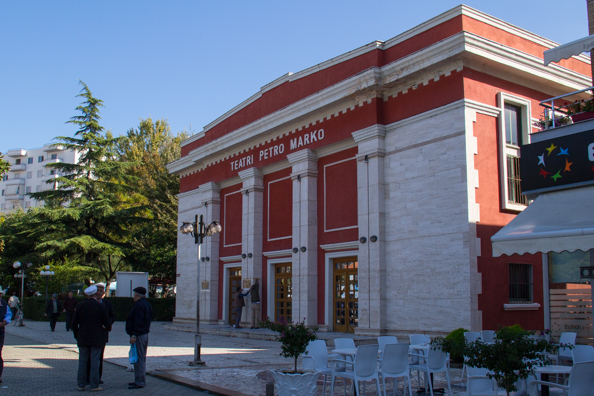 At the far end of Ismail Qemali Boulevard is the Muradie Mosque. During the rule of the Ottomans the majority of the population of Albania were Muslims. This sultan style mosque was built during the sixteenth century. It was designed by an architect of Albanian origin, Mimar Sinan Aga the Great, who was considered to be the greatest of the classic Ottoman architects. This mosque is the only one of his mosques left in Albania. It was not easy to get inside this beautiful building. Maybe it was because I was there in October which was out of season. Visitors have to abide by strict dress rules if entering during prayer time or slip inside during the short period the mosque remains open after prayers are over. Attempting to bribe the lady who sweeps the courtyard in front of the building is futile as the keys she shakes at you are probably her own house keys and she is very fleet of foot. 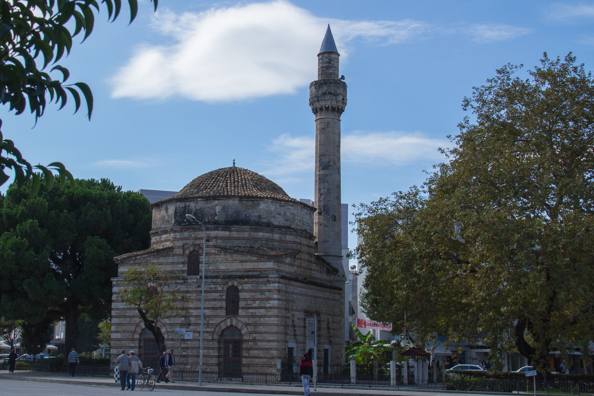 Just beyond the mosque, in the very heart of the city, is Flag Square. This square is dominated by the imposing Independence Monument. The monument, seventeen metres high, is the work of sculptors Kristaq Rama, Shaban Hadera and Muntaz Dhrami. Inaugurated in 1972 it is dedicated to the people’s war for the independence and freedom of Albania. The Albanian flag flutters in the far corner of the square in front of a small garden, the last resting place of Ismail Qemali. His statue marks the spot. 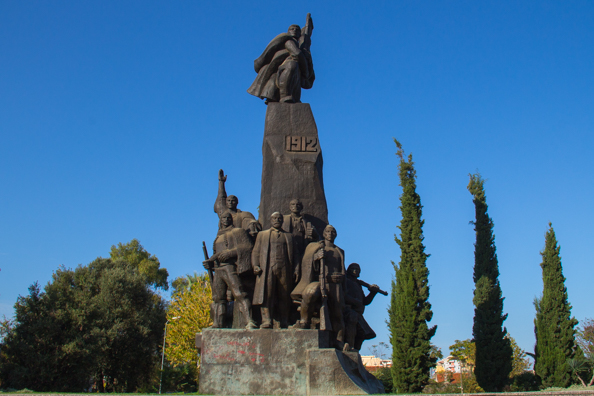 Known by some as the Turkish Bazar a large street market starts just beyond Flag Square filling several streets and selling everything from a large sofa to a small padlock. We were encouraged to bargain but it is not easy when you don’t speak the language. When I lapsed into Italian and was understood there were smiles and sighs of relief all round. A few minutes later I was marching triumphantly down the road with half a kilo of newly-picked almonds. It could have been a sack-full. 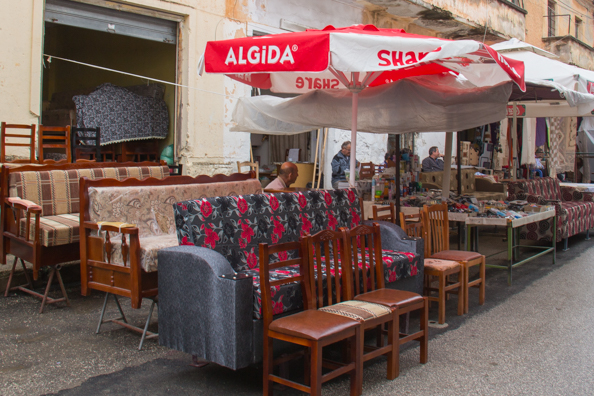 Half-way up the hill behind the city is the Martyrs Cemetery which commemorates those who died liberating Albania from the Nazis. It is accessed by purpose-built steps from the city centre. Nowadays it is the cemetery for firemen and policeman killed in the line of duty. It is also the ideal space for training the local girl’s football team. 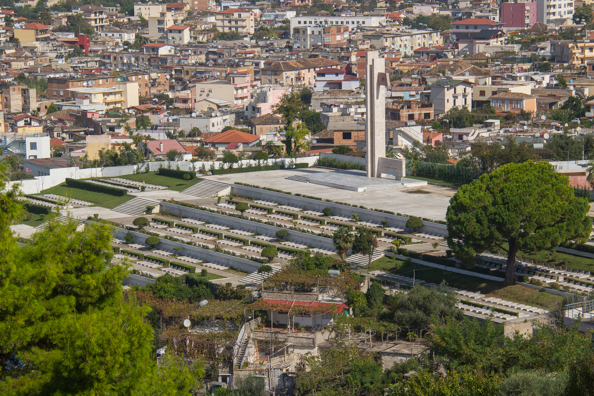 At the summit of the hill, on a natural terrace carved out by the sea, is the temple of Kuzum Baba, the centre of the Bektashi sect. It is a short walk up a narrow road and quicker to go on foot than any other means of transport. Vehicles have to make a tortuous journey through the most dilapidated part of town (or maybe our driver just got lost). Some would argue that this sect, founded in the sixteenth century based on the teachings of Haci Bektaş Veli is a branch of the Islam faith. Others would argue that due to its relaxed views regarding some Islamic traditions it is a ‘new’ faith. As far as our visit was concerned everything was very relaxed. 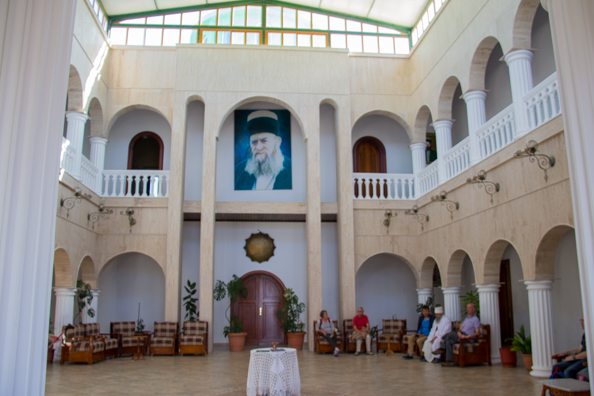 We sat around Baba who told us (through an interpreter) about their visit to a rally supporting the Paris victims in January 2015. The leaders of the four religions in Albania, Sunni Islam, Roman Catholicism, Bektashi Islam and Orthodox Christianity attended together. Albania’s religious freedom http://www.thefridaytimes.com/tft/majorly-muslim-in-europe/ has not gone unnoticed and Pope Francis has referred to it as an inspiring example for the world. During the dictatorship of Enver Hoxha Albania was subjected to forty years of religious suppression when churches and mosques were destroyed or used for different purposes. Priests and imams were regularly arrested and imprisoned or executed. By 1967 Albania had been declared an official atheist state. Anyone continuing to practice their faith had to do so in absolute secrecy. Many now believe this repression is responsible for the interfaith harmony that has emerged in post-communist Albania. 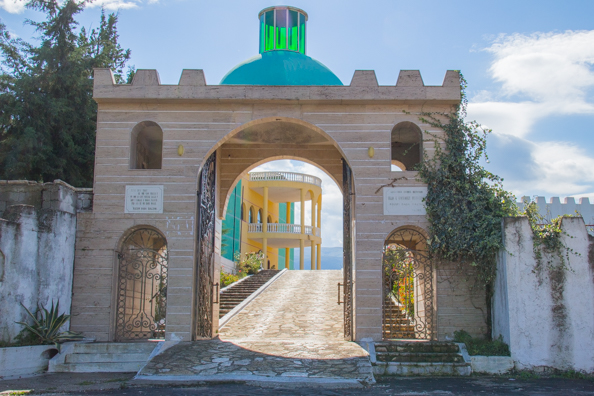 The temple is surrounded by gardens. The Kuzum Baba Tekke containing the türbe or tomb of the last Kuzum Baba at the edge of these gardens. This small building is where the previous Baba is buried and followers go there to pray and leave flowers. 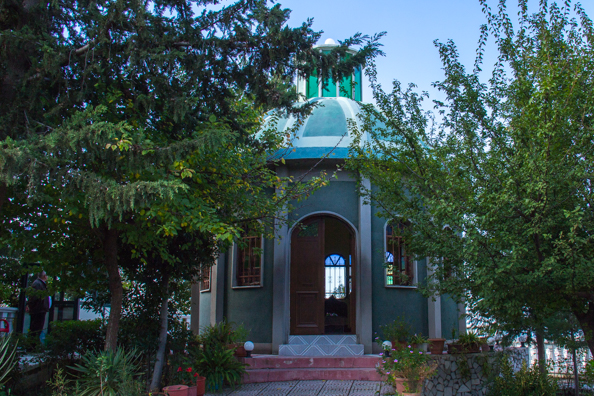 Also in the gardens is the Kuzum Baba Restaurant with a large terrace that overlooks the town and its coastline. This is where the beautiful Albanian Riviera starts and stretches far into the distance. A long promenade is currently being constructed and when it is finished it will be amazing. 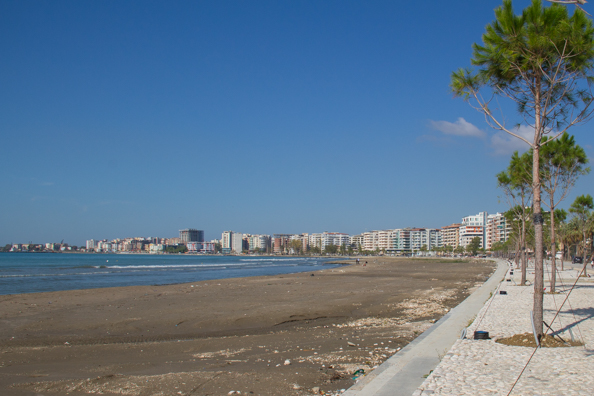