Gjirokaster, the Silver City of Albania

We arrived at Gjirokaster (also spelt Gjirokastra) in Albania mid-afternoon. The perfect time to explore this UNESCO world heritage site – in the cool of the day when golden rays from the sun enhanced the silvery grey stone of the buildings above and below us. 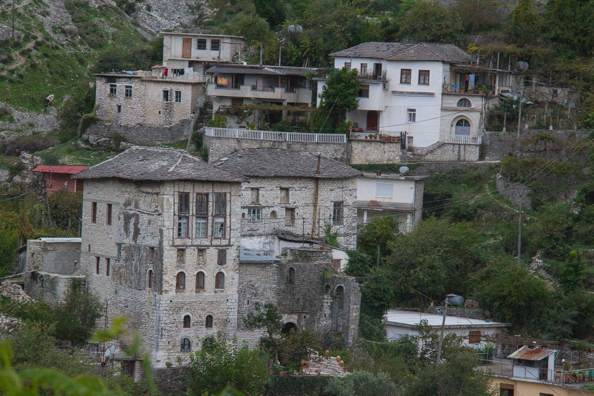 The original settlement, the Fortress of Argyro, was built on the summit of a hill overlooking a verdant valley in the Mali Gjerë mountains though which the Drinos River flows. It is one of the oldest cities of Albania. Its development has been influenced by the Greeks, Romans, Turks and Albanians. There are various theories surrounding the origin of its name. Maybe it comes from the name of the original fortress of Argyro which means Silver Fortress. But some claim it is because the grey buildings shimmer like silver when it rains – fortunately we did not have the opportunity to test this theory. It has also been christened the city of stone and the town of a thousand steps. Fortunately, we did not have to climb every one of them as we made our way up to Ali Pasha’s fortress that presides over the old town. Ali Pasha Tepelena is an Albanian hero and a prolific builder of castles during the nineteenth century. He followed an Albanian tradition that a man should build something for his loved one to express this emotion and Ali Pasha had seven wives. He extended the original fortress above Gjirokaster and added the clock tower. The fortress is affectionately known as Ali Pasha’s fortress. 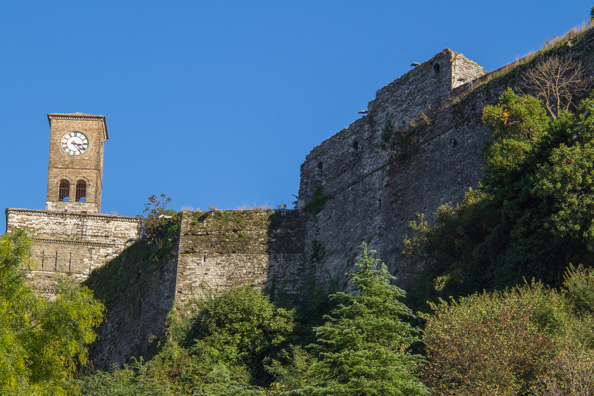 From the town the fortress looks quite small but in reality it covers the entire summit of the hill, resembling the shape of a fish. Walking into the Great Hall was like encroaching on a film set between takes. The barrels of war weapons protrude from a gallery of arches. This Great Hall was used as a political prison during the Communist era when whole families were interred for speaking out against the regime. It was opened as the National Museum of Armaments in 1971 and houses a huge collection of Albanian arms that represent the struggle for independence in 1912 to the end of the Second World War. Most of the museum is dedicated to the Partisan struggle against Italian and German occupation forces from 1939 to 1944. A huge statue of a Partisan loomed above us as we made our way out of the great hall to explore the rest of the fortress. 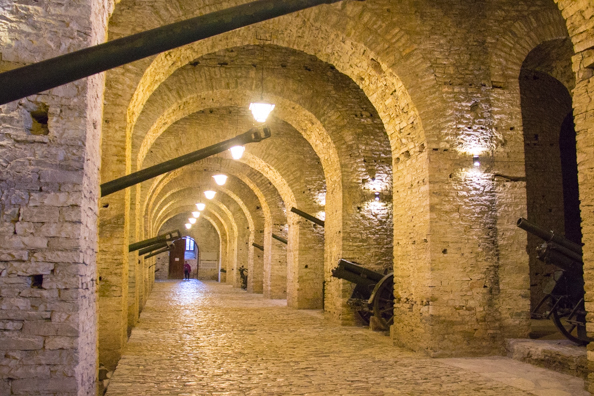 Emerging into a large grass-covered courtyard decorated with canons it was a surprise to see the shell of an airplane parked at the far end. This American Air Force plane was forced to land at Rinas Airport near Tirana, capital of Albania, due to technical problems in 1957. It has since found its way to the fortress as a reminder of Albania’s struggle against the West. 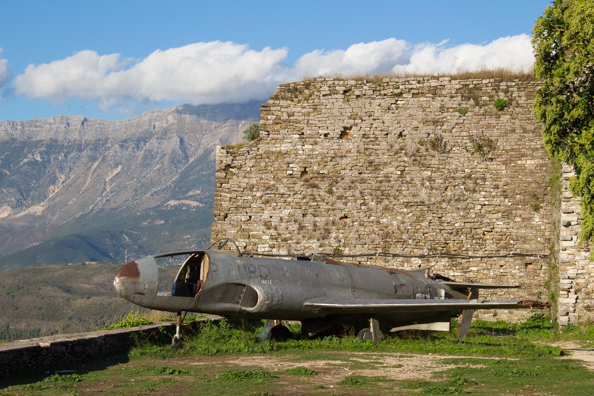 On the far side of an archway another, larger, grassed courtyard features the Festival Stage in front of the clock tower. This arena features the National Folk Festival. This internationally famous festival of traditional Albanian folk culture has taken place approximately every four years in the autumn since 1968. Albanian singers and dancers from all over the world perform at this festival. Albania has a total population of three million but four million Albanians live outside their country of origin. 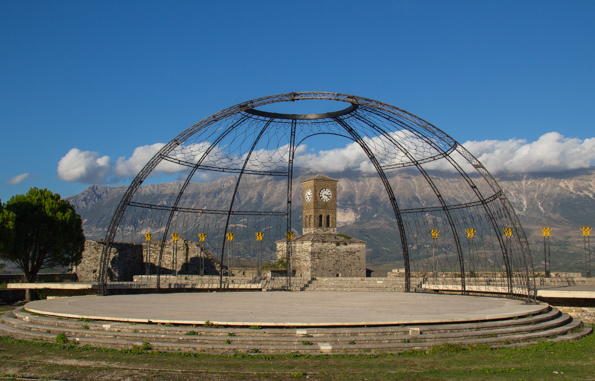 Walking back down to the town was a good opportunity to appreciate the mixture of architectural styles. Ottoman traditions are evident in buildings of the old town that creeps down the slopes of the hill into the valley. The town’s very distinctive appearance is also due to the local stone that was used for building blocks and the large roof slates cut from the limestone of the surrounding hills. In the past the landowners built grand fortified tower houses known as kullë.  These were a defence from feuding clans and rebellions. Skenduli House (or Skëndulaj House) is a good example of one of these houses, of which there are still hundreds in Gjirokaster. Typically, these houses have three floors topped with a turret roof and featuring wooden balconies and white-washed walls. Inside it is a rabbit-warren of rooms including several bedrooms with their own steam rooms and six long drop toilets. In total the house has sixty-four windows and nine chimneys. It also features a special room, the wedding room. Weddings are a very special occasion in Albania and a lot of money is spent on this celebration which lasts two days. First the wedding is celebrated at the groom’s home and then it moves on to the bride’s home. During the celebrations large quantities of the local spirit, Rakia, are consumed.

In 1964, during the Communist era this house was designated a Museum House by the Institute of Cultural Monuments. In 1981 the state took over the building which was turned into an Ethnographic Museum. This museum was re-located to the site of the family home of the dictator Enver Hoxha. The Skenduli House was returned to its original owners. They chose not to live there as the house was not fit for habitation. Instead they opened it as a private museum and the owner often takes people around the house. He does not speak English but we had a very good English speaking guide to show us around. This old house and several others are part of a project to restore some of the beautiful buildings that grace this town. 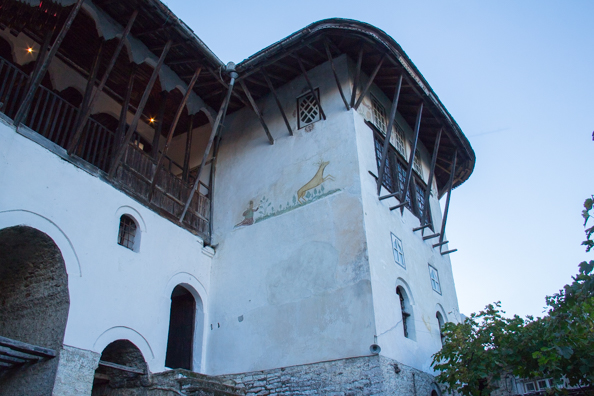 Perched above us on the other side of the town was another restored stone house. Zekate House, the most visited of the town’s stone houses. It is located in the historic district of Palorto, the best preserved quarter of the city. This imposing building features three floors spread across two large towers. The largest of its kind, it was restored during the Communist era and has recently undergone further restoration. Its owners live next door and are the key holders. It is an impressive sight from a distance and we were content with that. 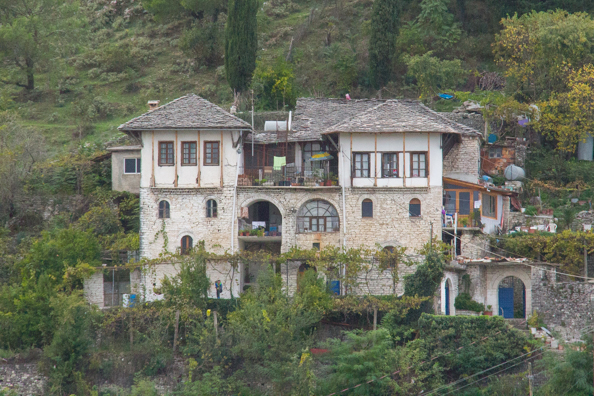 We had chosen instead to visit the Ethnographic Museum. Sadly, we were too late as it had just closed. It is open all year but not every day, all day. This museum was constructed on the site of the family home of the Communist dictator, Enver Hoxha in 1966 after the original building was destroyed by a fire. This new building was designed to represent a traditional Gjirokaster house during the nineteenth century. It features household items, folk costumes and cultural artefacts typical of a wealthy Gjirokaster family of merchants or Ottoman administrators of the period. 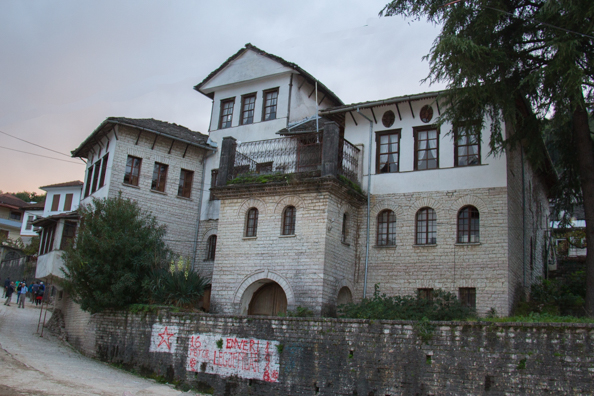 Gjirokaster is the birthplace of two famous Albanians – the dictator Enver Hoxha and the world-famous author Ismail Kadere. Enver Hoxha was the first Communist chief of state and ruled Albania for forty years after the Second World War until his death in 1985. He revolutionized the economy of Albania – farmland was confiscated from wealthy landowners and the country was almost completely self-sufficient in food crops. Investment in industry, previously almost non-existent, meant that by the 1980s the country did not have to rely on imports. Every rural district had electricity and health and education was free. However, in order to enforce his programme Hoxha resorted to brutal tactics that included the confiscation of property and imprisonment and exile of dissidents. Churches and mosques were closed and some were destroyed. A lasting legacy of his regime are the seven hundred thousand bunkers scattered around the country and testament to his irrational fear of imminent war. 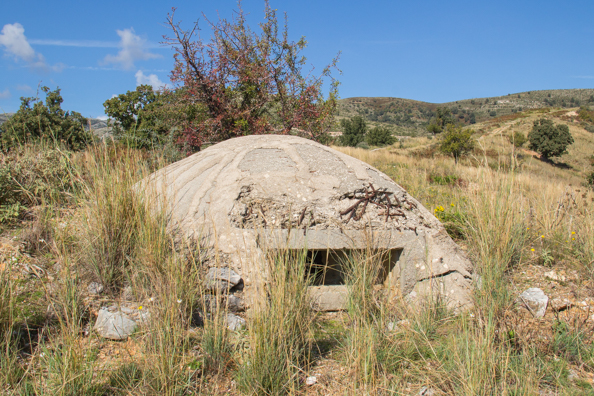 We had time to browse the small shops in the bazaar on the way back to our hotel, Hotel Cajupi. We were invited to buy hand-knitted accessories, crocheted table mats, and locally produced honey and dried herbs. One of my companions was anxious to buy some Rakia. When we enquired in one of the shops we were told they could not sell us some but we could try it. A plastic water bottle and some small glasses were produced from under the counter and we were soon sampling the fiery liquid. I continued on my way with a warm glow inside. 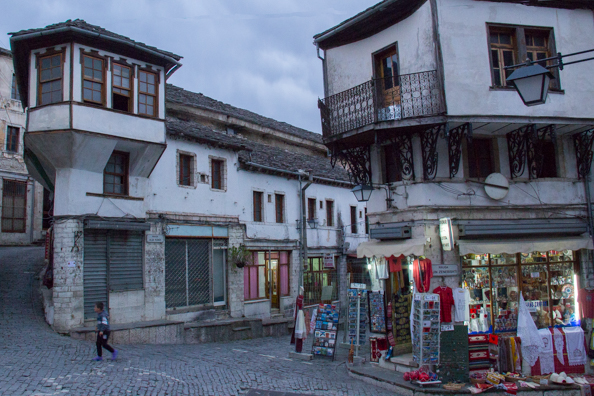 That evening, dining in the roof-top restaurant of our hotel was my first introduction to iso-polyphonic music. Five men in traditional dress were sitting at a round table and at regular intervals broke into song – unaccompanied song. It was a bit unnerving at first as there was no introduction and no warning when another song would begin. Fortunately, one of my companions knew all about it. Albanian iso-polyphony is UNESCO protected music. The word iso comes from the ison of Byzantine church music and refers to the drone that accompanies the singing. On this occasion the drone was all that was performed but I was to come across this music on two more occasions when female singers performed with the drones. The haunting melodies are a lasting memory. But while watching that first performance I could not help but wonder what was in the plastic water bottle in the table in front of the singers. 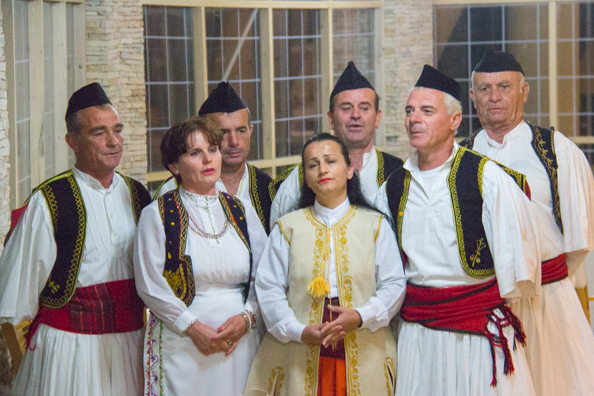