Some Secrets of Southern Albania

Today Albania may be off the beaten track as far as many tourists are concerned it does have a lot to offer. You should go before everyone else discovers its secrets.

Perched above the Albanian tourist capital of Saranda is Lekuresi Castle. It was built in the early sixteenth century by Sultan Suleyman when Albania was part of the Ottoman Empire. The castle was built to protect the coastline of Saranda from invasions by sea. A rough, unmade road leads up to the castle which is now a restaurant where you can sip a coffee while appreciating the wonderful views of Corfu and the Ksamil Islands. In the summer the castle is also used as a concert venue. 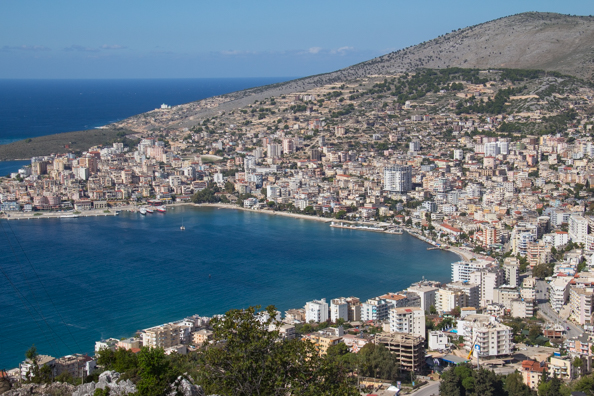 A photograph could never reproduce the stunning blue colour of the Blue Eye spring as it rises from the depths of the Blue Eye Lake in the Blue Eye National Park. As you walk around the lake the colours of the water change from a vibrant green to the profound blue around the forty-five-metre-deep spring. it does give the impression of an eye, hence the name. The lake is set in a forest of trees bearing hazelnuts, walnuts and cherries as well as pines and firs. Visitors can walk from the end of the lake through the woods to the spring. An experience that was preserved for the elite during the Communist regime. After viewing the spring visitors can enjoy a meal at the restaurant on the water’s edge. 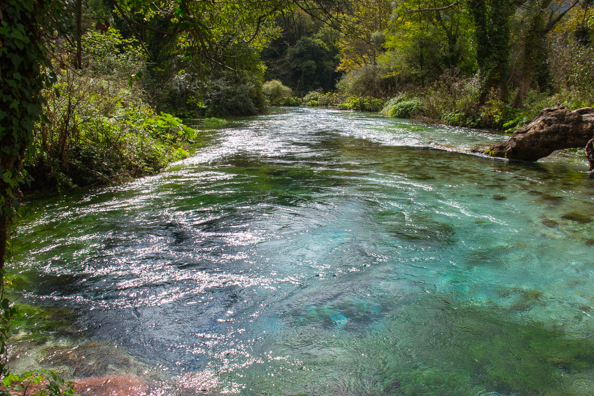 Tucked away above the village of Kolonja the Ardenica Monastery is a bit out of the way but it is worth a visit. This Byzantine structure is still occupied by monks, albeit only three. For this reason, it cannot be used for wedding ceremonies but it is a popular venue for photographs of the bride and groom. However, it was once used for weddings as it is here that a national hero of Albania, Gjergj Kastriori Scandarbeg married Princess Andronika Arianiti. As yet, the monastery is not set up for visitors. Visitors turning up in the hope of gaining entrance to the monastery may be unlucky but those accompanied by a local guide will fare better as they can arrange for the monastery to be opened by the caretaker. Unless he has raced down the road to a local restaurant, Ardenica Restaurant, to provide them with fresh produce produced in grounds of the monastery. This restaurant offers a selection of organic dishes including their speciality of meat accompanied by their home-made bread soaked in meat soup. 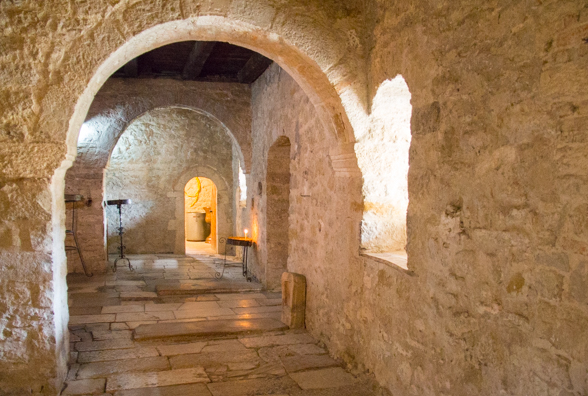 The Ancient City of Apollonia

Not far from the city of Fier is the Ancient City of Apollonia is set in a large archeological park that enhances both the ruins and offers sweeping views of the surrounding countryside. Greek settlers from Corinth and Corcyra founded this city in the seventh century BC. It was once a busy and important harbour but then an earthquake in the third century BC damaged the infrastructure and altered the course of the Vjosa River causing the harbour to silt up. This changed the trading routes and the city suffered a dramatic decline. The on-site museum has artefacts that plot the course of history through the centuries. This museum is housed in a medieval monastery complex comprising several structures from different periods and includes the beautiful old Santa Maria Church currently under restoration. 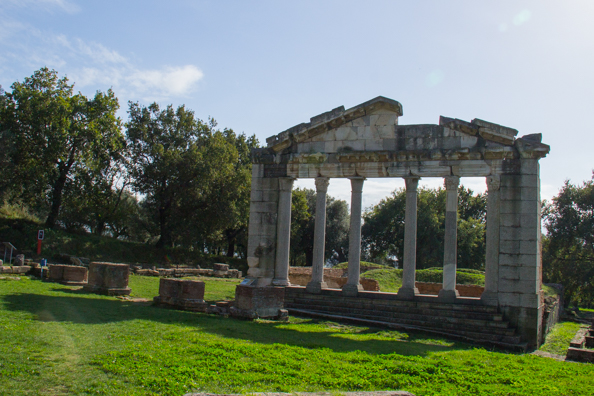 On the road to Vlore, just before reaching the city, are the salt pans and Narta Lagoon. A refreshing walk along the edge of the lagoon is welcome after a long journey – and maybe you will spot some flamingos there. The flamingos who live in this lagoon are grey not pink. This lake is well-known internationally due to the number of sea birds that visit the lake during the migration period. In the early evening locals arrive for a spot of fishing. A rather dilapidated wooden bridge stretches most of the way across the water to Zvërnec Island. To get across to the island you just have to hope the boatman is available to row you across the gap. This island is one of the two islands in the Narta Lagoon. This picturesque island, dotted with beautiful cypress trees has a lovely beach and is home to the Byzantine Saint-Mary Orthodox Monastery. 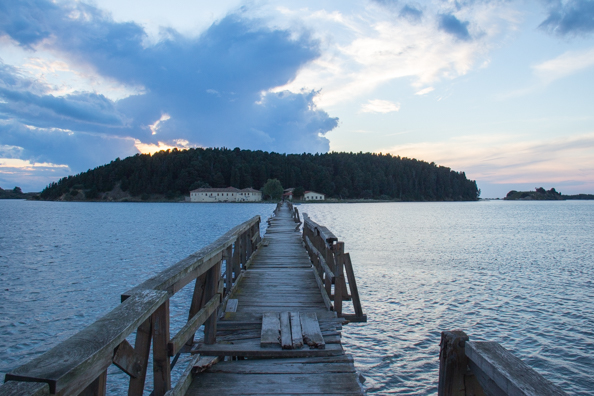 The old shepherds’ village of Piluri

Piluri is a tiny village creeping up a slope in the mountains above the town of Himara. We made our way there in a fleet of small jeeps. We bounced along the unmade track the split the stunning landscape of coastline below and stark mountains above. The villagers live on fresh produce including feta cheese, yoghurt, olives, figs and walnuts. After visiting the local church and cemetery and learning about traditions in the village we had a ‘tasting’ in the home of a local shepherd. He still tends his flock at the age of eighty-five. The freshness of the produce from this village is so famous that people drive up from the town to buy it. After our tasting, which included the local spirit, Rakia, we walked through the village to the second home of a local businessman for lunch. We feasted on an extensive buffet of homemade food accompanied by a delicious local wine. It was a wonderful day out. 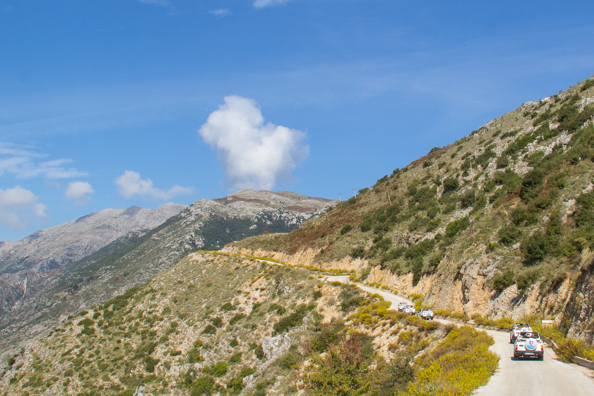 The pretty Porto Palermo Bay was off limits during the Communist regime as it was a military base and traffic was prohibited on the road around the bay. Now visitors are welcome here. Remnants of its military importance remain. The tunnel through the peninsula that was used by the country’s seven submarines is now locked up (I am told that no-one knows where the key is). The slopes are dotted with single-person mushroom-shaped bunkers – a few of the seven-hundred thousand constructed by the dictator Enver Hoxha who was obsessed with the possibility of war. He even planted the slopes with Agave to shred the parachutes of invading forces. The highlight of the bay is the castle built by Ali Pasha Tepelena, another Albanian hero, for his youngest wife (he had seven). 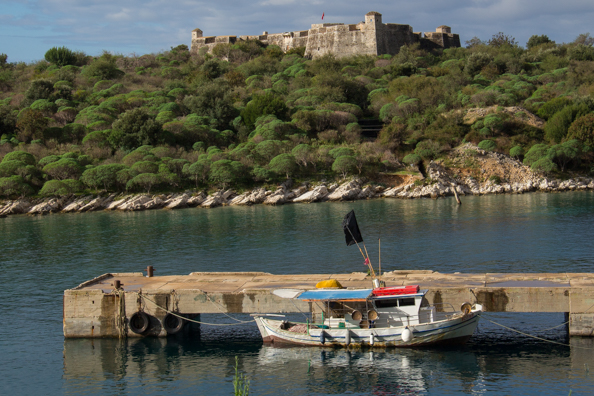 Butrint National Park is certainly a national treasure and I could have spent all day wandering around the amazing Roman ruins and exploring the medieval castle. Information boards describe each building making it easy for the visitor to explore on their own. Butrint has been inhabited since prehistoric times. It was colonised but the Greeks, the Romans built a city there. It was also a bishopric, a prosperous Byzantine city and was briefly occupied by the Venetians before being abandoned in the Middle Ages when marshes developed in the area. My visit followed a night of heavy rain but rather than impeding my progress it added another dimension to my images.
! /admin/resources/butrint-national-park-in-albania-8439.jpg (The Roman Baptistery in the Butrint National Park in Albania)!

It is a pleasure strolling along the seafront of Saranda watching the fishermen selling their catch of the day, exploring the handicraft stalls in the arcade on the shore-line or enjoying a leisurely lunch in the Paradise Restaurant on the water’s edge. 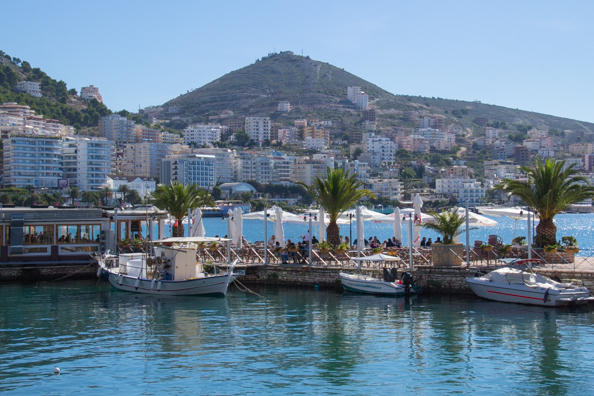 Perhaps the biggest surprise of all is the bronze bust of Hilary Clinton in the town. 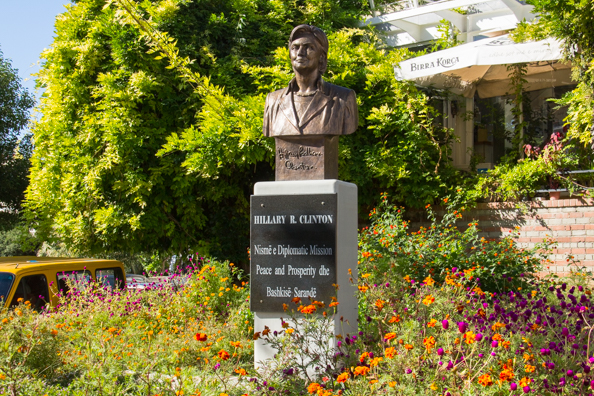