Austrian Verona could also be described as the Hidden Verona. The period when Verona was part of the Austro-Hapsburg Empire, 1815 to 1866, was not a happy time for the Veronese. Once it had become part of the new Italian Republic in 1866 they took measures to hide some of the buildings from that era. Verona had been coveted by the Austrians due to its strategic position. They made it the capital of their territory in Italy and turned it into a fortress town. It became part of a strong defensive system that incorporated the whole Veneto region. During their rule the town was re-designed by Austrian engineers and architects. They created walls, gates and fortresses. They also built functional buildings such as the Santa Marta, a huge neo-Gothic style bakery that produced food for all the soldiers in the city. This building is now the headquarters of the University of Economics of Verona. But the architects from Vienna also took inspiration from the different styles of Verona, in particular Romanesque and Gothic. Some of their buildings blended perfectly with the existing architecture. Palazzo Barbieri is a good example. This neoclassical building was built on the north side of Piazza Bra between 1836 and 1848. This elegant, yellow building that was originally constructed to house the soldiers of the Civil Guard Corps blends well with the other buildings in this beautiful square. While it was being built the piazza itself was cleaned up and the level was lowered exposing the underground sections of the Arena, the Roman amphitheatre. 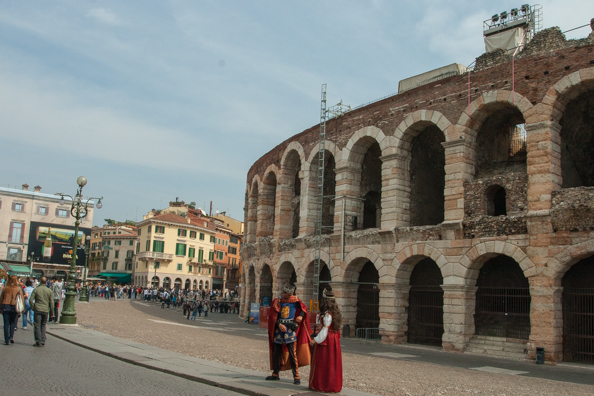 Palazzo Barbieri was designed by the engineer Giuseppe Barbieri in a style reminiscent of the great architect Andrea Palladio with two wings decorated with large half Corinthian columns. As this building is now used as the Town Hall most of the rooms are used for administrative purposes but it is available for weddings. The wide flight of steps up to the building make and excellent setting for photographs of the happy couple and their guests. 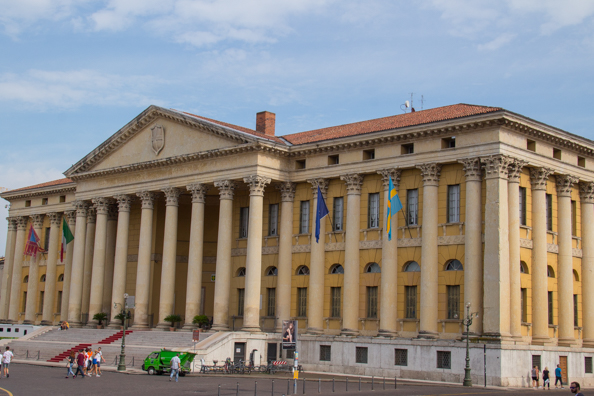 I decided to start my quest to find Austrian Verona by doing a circuit on the Hop-on Hop-off sightseeing bus. Apart from walking up Saint Leonardo Hill it was the most convenient way to get to the old Fort San Leonardo perching on its summit. This fort was once part of the impressive fortifications of walls and towers that surrounded Verona. The Austrians built this fort on the site of the Shrine of Our Lady of Lourdes in 1838. The fort was damaged during the Second World War and in 1952 it was given back to the church. Since then it has been rebuilt as the Church of Our Lady of Lourdes incorporating some features of the old fort. Behind the church is a statue of Our Lady of Lourdes which miraculously survived the war in tact. I spent some time exploring the church and its environs. The wide terrace that was once used to drill the troops is now the perfect place to enjoy the panoramic views of Verona below. 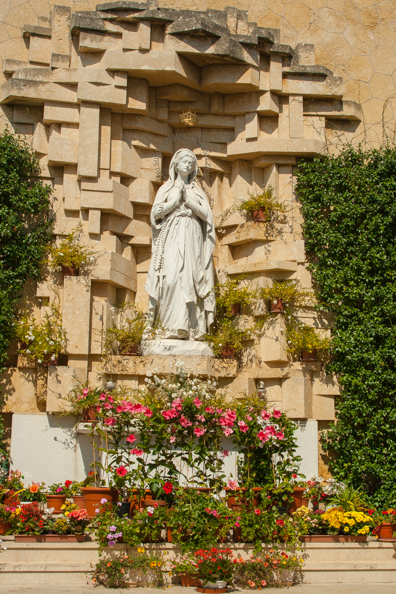 My next objective was another fort built by the Austrians, Castel San Pietro. This fort was built on the left bank the River Adige which flows through the city. This suburb was christened Veronetta or little Verona by Napoleon with the intention of belittling its inhabitants after it had been ceded to the Austrians in the Franco-Austrian Treaty that concluded the war between the French and the Austrians. Castel San Pietro was built by the Austrians in 1851. The original Castel San Pietro, built by Giangeleazzo Visconti in 1398 had been blown up by the French in 1801. Its ruins were demolished to make way for the new castle, a fortress with barracks. This building became the property of the City of Verona in 1932 but it is not currently open to the public due to its dilapidated state. But it is worth walking up the steps to the castle as the terrace in front of it is a pleasant place to sit and enjoy the views of Verona below and the Church of Our Lady of Lourdes on the skyline. I am not a great map reader and after searching for the path up to the castle I asked a local resident and was directed to the steps that would take me up there – between a small cafe and a pharmacy. It was worth the effort. 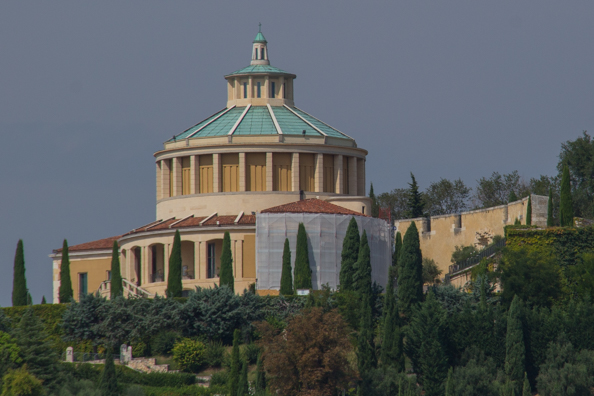 I found a different route back down that took me round the side of the Teatro Romano – I had some wonderful views of this ancient theatre that was once in the heart of the ancient city of Verona. 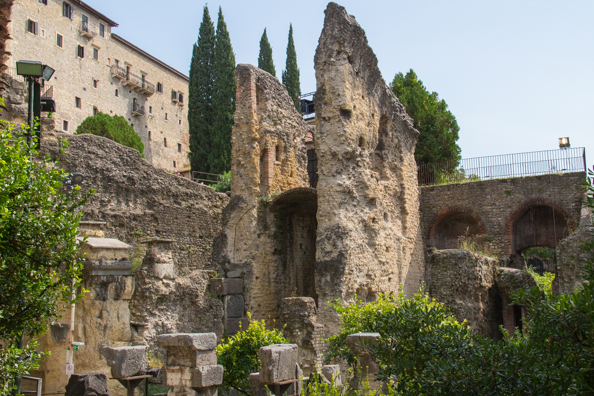 I passed more Austrian fortifications along the bank as I made my way to the Arsenale Austriaco. An imposing building straddles the entrance to this large military complex that was built by the Austrians between 1854 and 1861 and dedicated to the Emperor Franz Joseph I. 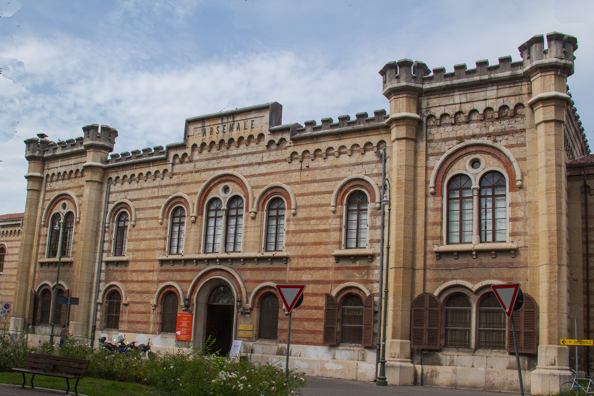 I was expecting great things when I stepped through the portal. Part of the large grass-covered courtyard had been converted into a children’s playground. The courtyard itself was ringed by single-story buildings most of which were boarded up. One of these buildings was open as it was hosting a handicraft exhibition. I went inside, more curious about the interior itself than browsing the stalls. I was not disappointed. Despite its shabby appearance it was the ideal venue for this and similar events. 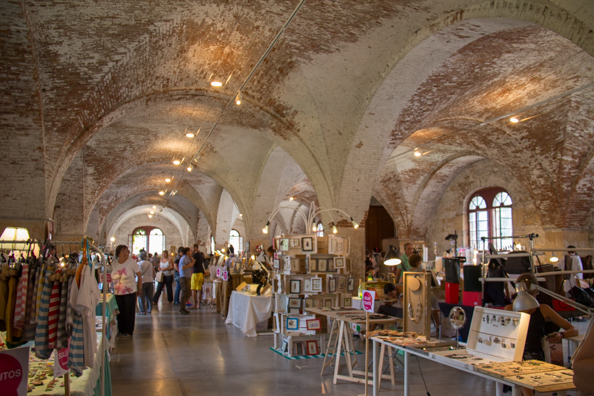 The Arsenale was built on a large green plain and comprised nine buildings separated by courtyards and squares and all linked by internal roads – all enclosed by a wall. After Verona became part of the Kingdom of Italy in 1866 its authorities continued to use the Arsenale for military purposes. After it became the property of the Municipality of Verona part of it was turned into a public park but the rest of it remains in its original state. 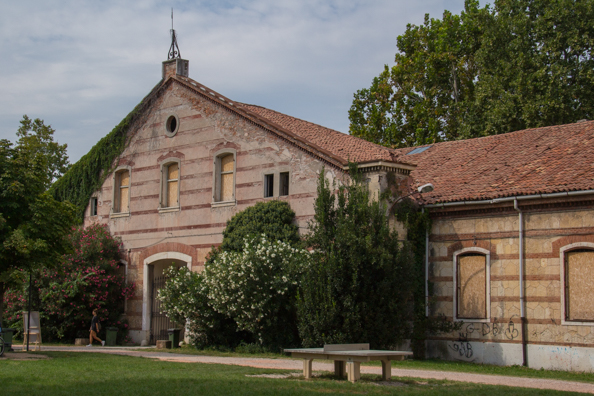 When the Austrians handed Verona over to the Kingdom of Italy in 1866 its military importance was at an end and there was hardly any industry in the city. The city entered a period of difficulty made worse by a terrible flood in 1882 which destroyed many buildings and washed the two main bridges away. But the city revived, prospered and expanded and today it is a popular tourist destination.