Verona, in Italy is a World Heritage UNESCO site and deservedly so. It is the only place I know where you can peel away its history layer by layer. I have already explored Roman Verona and Medieval Verona today I was exploring the Venetian influence. Turning away from the main centre, Piazza Bra, I headed towards Porta Nuova once the main entrance to the city. When Verona became part of the Republic of Venice (known as la Serenissima Repubblica) in 1405 it was the start of a long period of stability for Verona. This lasted until the end of the eighteenth century when Napoleon’s troops marched into the city. It also heralded the arrival of the Renaissance which was spreading through Italy. Veronese architect Michele Sanmicheli was entrusted with the task of re-building the defences of the town during the sixteenth century. When it was built this entrance penetrated a massive defence system. Now it is a traffic island. 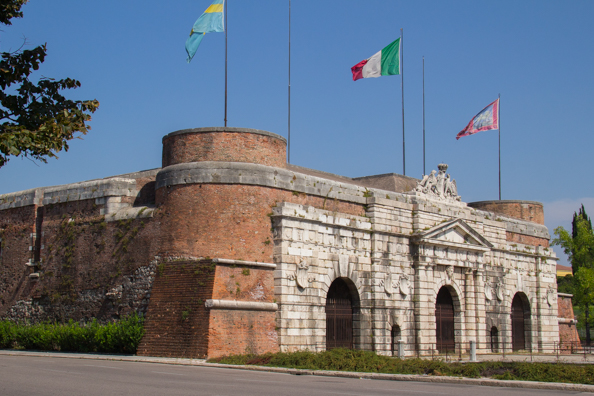 After I had done a circuit of this impressive gate I noticed a path that would take me onto the city walls. I love to walk round city walls as, apart from an elevated view of my surroundings the trees would offer some welcome shade. I strolled along until I spotted the next gate, Porta Palio. This gate was built by the Venetian Republic between 1542 and 1557 and is one of the most important architectural works of Michele Sanmicheli. It was originally dedicated to San Sisto but was known as the Stupa as it was off limits to all regular traffic. The name was changed to reflect the fact that it became the starting point of the Verona Palio. This was a race on foot and horseback. Dating back to 1208 it is the world’s oldest running event and was run every year until the end of the eighteenth century. Dante Alighieri, Italy’s great poet, referred to this event as the Race of the Green Cloth. This was a reference to the prize, a green cloth that was awarded to each of the winners of the horseback race and the running race. The consolation prize had more substance – a leg of pork. The race was revived in 2008 and a green cloth is still awarded to the fastest man and woman. 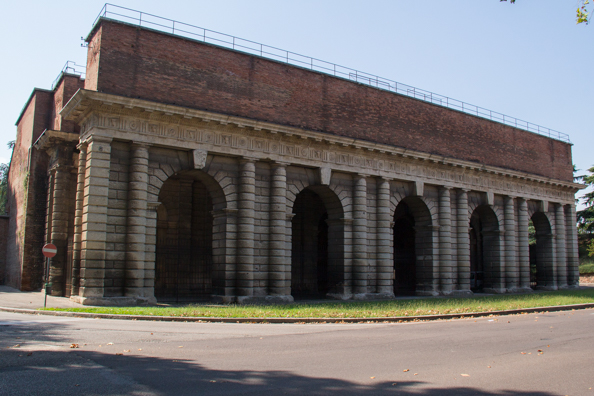 I returned to the top of the walls. The grassy areas here are part of the Parco del Mura a lovely way to open up this historic area of the city. Information boards at regular intervals relate the history of the components of these walls and ramparts. I followed the path until I reached Porta San Zeno. This was the third of Michele Sanmicheli’s imposing entrances into the city. For me this was the prettiest of the three with the contrast of red brickwork with white casing stone. Its appearance is also enhanced by the fact it is still attached to the city walls on one side. This building once housed the guard but now forms the headquarters of the Committee for the Bacanal Gnoco, organizer of the celebrations for the Veronese Carnival. This has been an annual Easter event since 1531. It is one of the oldest carnivals in Italy. 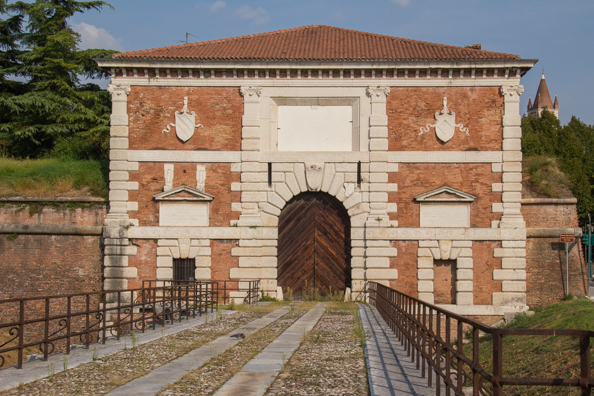 From this gate I could see the distinctive, stripy, detached, Romanesque bell tower or campanile of the Church of San Zeno. This church was founded in the fifth century to house the relics of the patron saint of Verona, San Zeno. The church was later rebuilt and enlarged with the addition of a monastery. This monastery survived until it was dissolved by the Republic of Venice in 1770 and the basilica became a parish church in 1806. Particularly impressive are the magnificent bronze doors that date from the twelfth century. I really enjoyed wandering through its pretty Romanesque cloister. 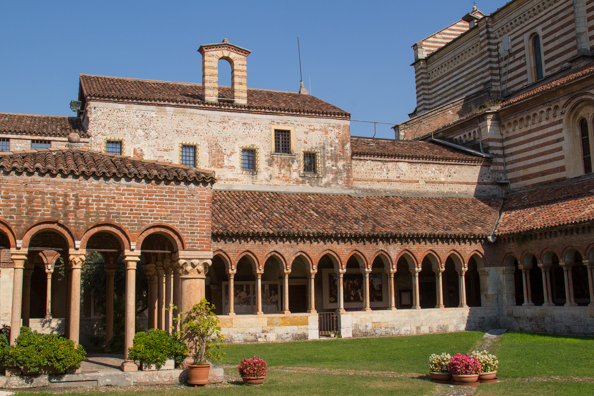 On my way back into the city centre I went through Piazza Erbe. This is one of my favourite places in the city. Apart from featuring market stalls and a line of restaurants down one side it is ringed by beautifully frescoed buildings including the Mazzanti Houses. Originally owned by the della Scala family and used as wheat stores these houses were bought by the Mazzanti family at the beginning of the sixteenth century. They followed the current fashion of painting the exteriors. During this period Verona boasted more than three hundred painted façades and was nicknamed the painted city.

Moving on to the Piazza dei Signori http://www.verona.com/en/guide/verona/piazza-dei-signori-verona/ to admire the stunning façade of the Loggia del Consiglio. This Renaissance palace was built in the second half of the fifteenth century and is considered to be one of the most beautiful Renaissance palaces in Northern Italy. Statues of Vitruvius, Catallus, Pliny the elder, Marcus Aurelius and Cornelius Nepos adorn its roof. As it currently houses the Provincial Administration it is rarely open to the public. 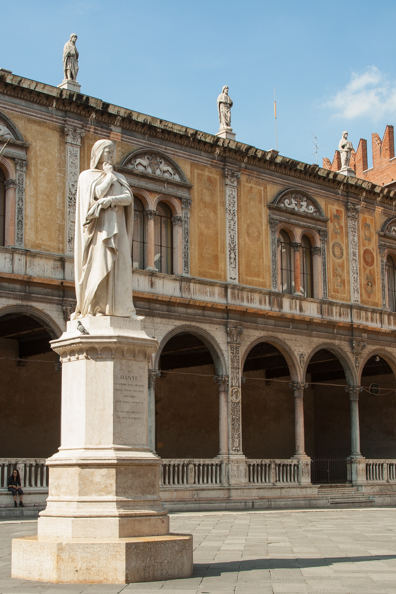 I finished where I started in Piazza Bra where my attention was drawn to the Palazzo della Gran Guardia opposite the famous Arena in the same square. As its name suggests (grand guard) this building was designed for military purposes by Domenico Cartoni, a pupil of Michele Sanmicheli. When it rained the troops could be reviewed beneath the building’s wide porch. Building, in the baroque style, commenced in the first half of the seventeenth century. The work was interrupted due to a shortage of funds and it was finally completed two centuries later in 1836. Recently restored the palazzo is now an important venue for exhibitions, cultural affairs and other events. 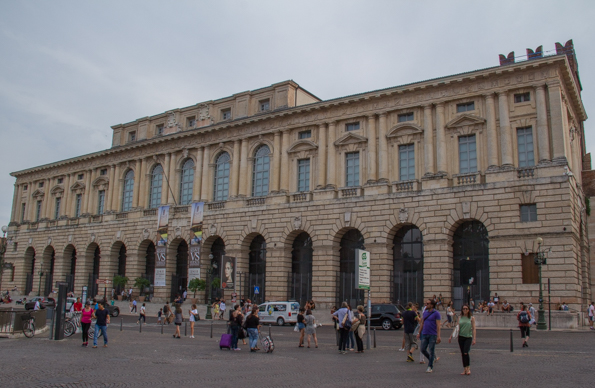 I would be back, I had one more layer to peel away as the Austrian Empire had also left its mark on this fascinating city.