A Dozen Delights in Monaco

The Rock of Monaco

Monaco is the second smallest principality in the world (the Vatican is the first). Covering only 1.5 square miles it is more like a large city than a small country. As the second most densely populated area in the world it has had to find ingenious ways of accommodating all the people who have decided to live there. A haven for the rich and famous it is also a fascinating place to visit. The rock of Monaco may look solid as you approach but in fact it is a honeycomb of tunnels and car parks. As strict residential qualifications apply and its wealthy occupants and visitors have to be looked after thousands of workers commute in and out of the principality every day. Escalators and lifts whisk visitors up to the top of the rock the home of its capital – Monaco-Ville. From here a panorama of harbours, hotels and high-rise residences unfolds. The traditional quarters of Monaco are Monaco-Ville, La Condamine, Monte Carlo and Fontvieille. The latter was reclaimed from the sea during the 1970s. 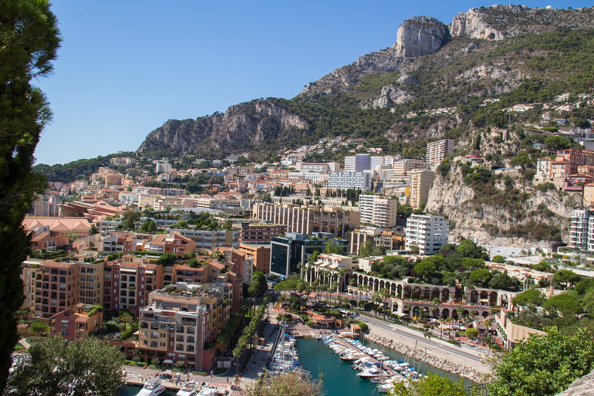 Visitors emerge from their underground parking outside the famous Oceanographic Museum. This museum was founded by Prince Albert I in 1910. Before he succeeded his father as Prince of Monaco Albert had been engrossed in scientific research and the Museum is part of the Oceanographic Institute which also included an establishment in Paris to teach this science. The museum features an aquarium, a natural history section and also hosts a wide variety of temporary exhibitions. Outside is the famous yellow submarine of Jacques Cousteau although this is sometimes displaced to make way for exhibits relevant to a current exhibition. This museum is housed in a splendid building best appreciated from a terrace in the St Martin Gardens next door. 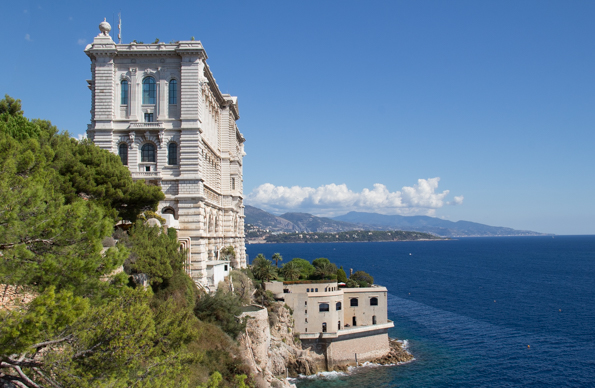 Monaco is home to several beautiful gardens but St Martin Gardens are the most accessible. These gardens feature a wide variety of exotic plants and trees as well as beautiful blooms, a large parrot in flight, a little pond and some classic works of art. A statue of Albert I looks out to sea from one of the small viewing terraces. 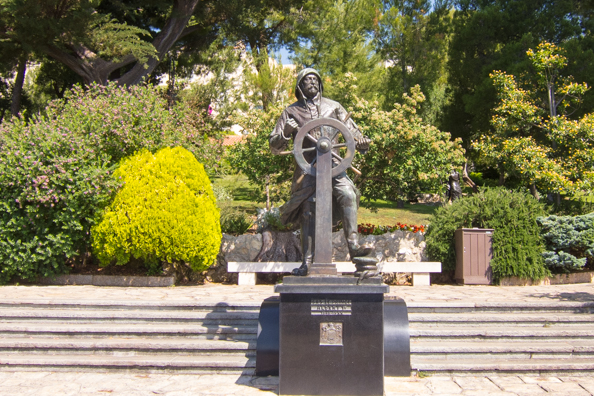 The path through the gardens emerges in a small courtyard in front of the Cathedral of Monaco. This beautiful cathedral was built in 1875 on the site of a thirteenth century church dedicated to Saint Nicholas. Its style is Roman-Byzantine and it was built using white stones from La Turbie. It was here that Prince Rainier and Princess Grace (Grace Kelly) got married and where they are now buried. 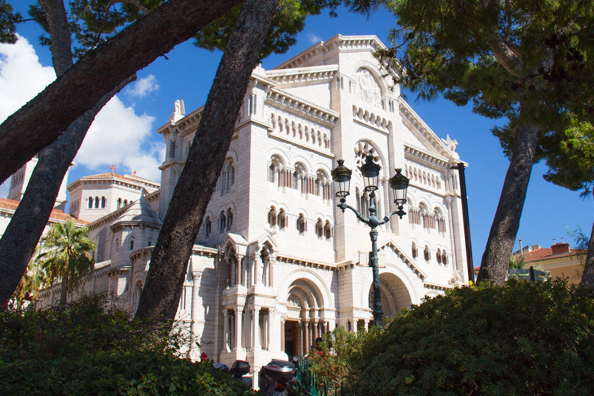 Narrow cobbled streets lined with small shops and restaurants climb the hill to Place du Palais on its summit. The Royal Palace, the Princes Palace, has pride of place here, stretching across the far side. A hooded statue looking stealthy and furtive is positioned in front of the castle. This is François Grimaldi who, disguised as a Franciscan monk, infiltrated the stronghold of Monaco. Once he had gained access he was able to get his small army inside and claim the fortress in the name of the Pope. No wonder he was known as Malizia (the cunning one). This happened at the end of the thirteenth century during the struggle between the Guelphs and Ghibellines. The Grimaldi family had been expelled from their own province of Genova and took refuge in France. This was their revenge and, through a series of clever alliances, they have maintained their positon as rulers of Monaco. The Princes Palace is still the home of the ruling Prince of Monaco, currently Prince Albert II but the state rooms are open to the public. 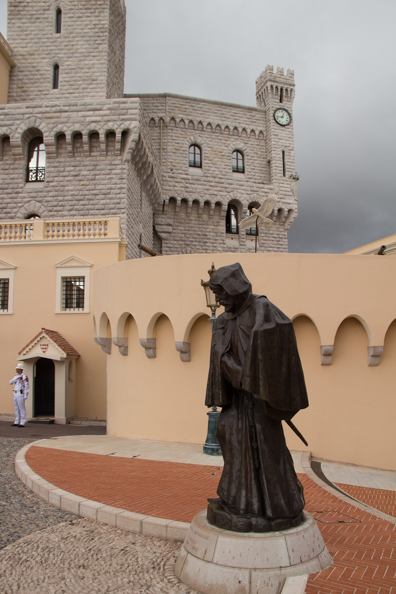 The Changing of the guard

Every day, at midday, on the square in front of the Princes Palace the traditional ceremony of the Changing of the Guard takes place. Thousands of visitors attend this event every day to watch the Carabiniers du Prince parading. In the summer they wear white uniforms and in the winter they change to navy attire. 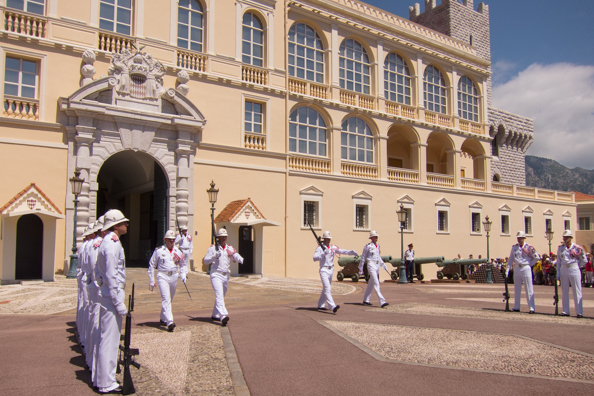 The Path between Monaco and Monte Carlo

Behind the statue of François Grimaldi is the entrance to a path that links The Rock to Monte Carlo. It is one of several walks in the principality and passes through one of the old gates into the fortress on the Rock before arriving in la Condamine, the heart of traditional Monaco and site of the fruit and vegetable market. Walkers can admire views of Monte Carlo waterfront during their descent. 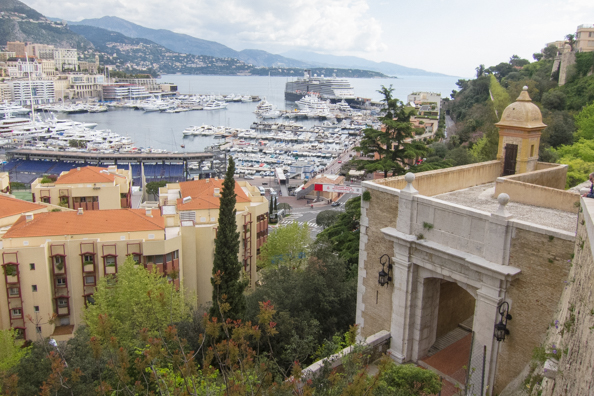 Stroll along the waterfront of Monte Carlo admiring the luxury yachts berthed there. This area is the site of the annual Monaco Yacht Show – the only place to admire and purchase a unique superyacht. Beyond the marinas, if you have not stopped for a bite to eat at one of the harbour-side restaurants you will reach the Opéra de Monte-Carlo. This opera house is part of the Monte Carlo Casino and a reminder that Monaco has always been a very strong patron of the arts. Its national orchestra is bigger than its army. 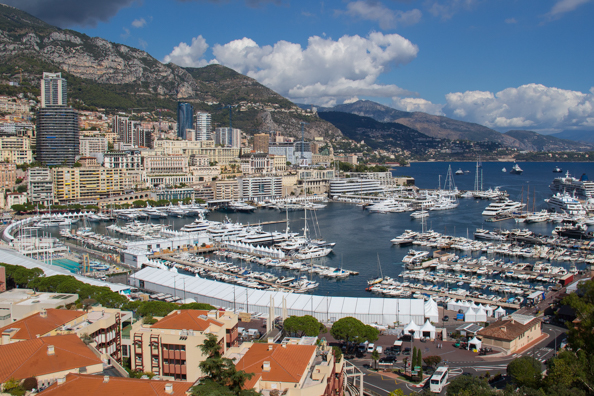 Dominating the Place du Casino is first successful casino to be built in Monte Carlo. It is now one of several in the principality, but this was the saviour of Monaco and the source of much of its wealth. This world famous gaming centre was created by “François Blanc”: http://www.riviera.fr/moncarl.htm, founder of the Société des Bains de Mer. His vision took shape during the mid-nineteenth century when the Belle Epoque styled Casino, the Hotel de Paris and the Cafe de Paris were all built in Monte Carlo. These enterprises made so much money that the Prince no longer needed to impose taxation on his residents. The casino is still flourishing today and it is now open to visitors in the morning, before gaming starts. An opportunity to visit the plush private rooms. 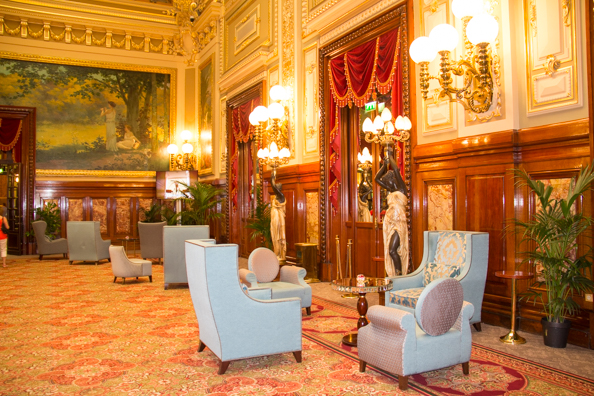 If you want to see how the other half shop then take the escalator (by the entrance to Hotel Le Metropole) down to Le Metropole Shopping Centre and enter a world of chandelier-lit galleries. If you don’t want to shop then enjoy a coffee on the first floor and watch others spending their money. 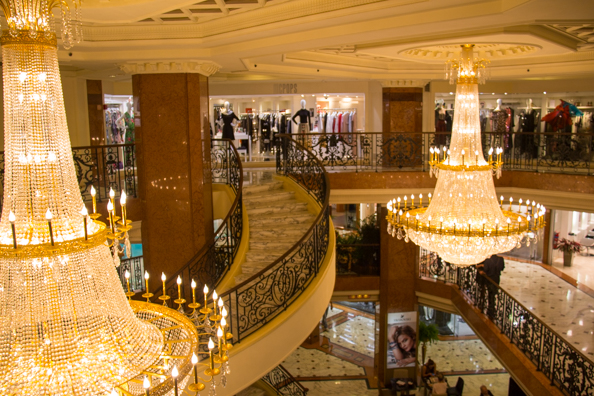 Most people are aware of the famous Formula 1 Monaco Grand Prix but they may not be aware that its roots were laid in a cycling club. As the popularity of cycling waned in the principality the club became and automobile club. When it failed to gain international recognition the club responded by organising its first Grand Prix in April 1929. The street circuit twists and turns through the streets (and a tunnel) of Monaco. Former world champion driver Nelson Piquet said it was like riding a bicycle around your living room. The most famous section is the Fairmont Hair Pin bend where the rumble kerbs (a permanent feature) bear the black marks of racing tyres. 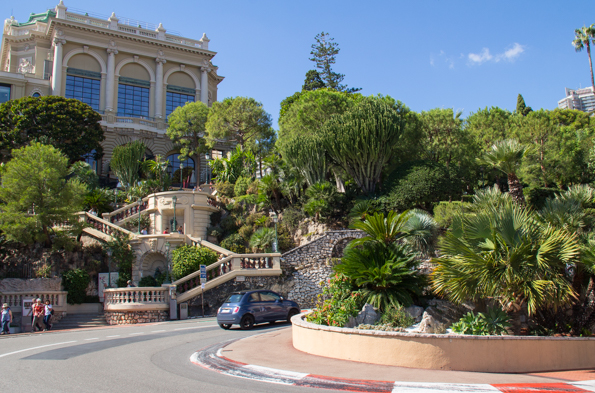 If you don’t want to walk there is a tourist train to whisk you round some of these delights. Its station is opposite the Oceanographic Museum. Whoo, whoo…. 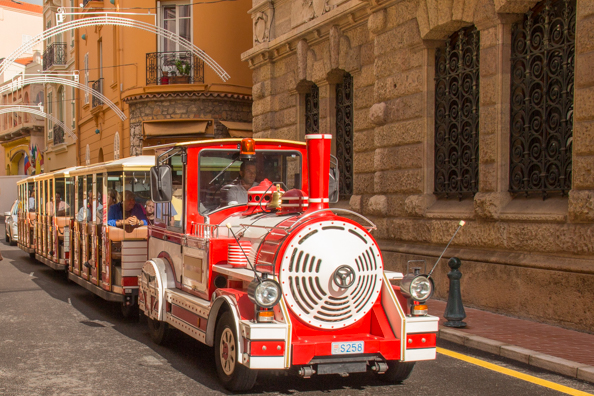