Approaching Limone from Lake Garda the visitor is immediately struck by an abundance of lemon groves and olive trees. The buildings along the shore-line are festooned with the brilliant blooms of bougainvillea and its long promenade is lined with oleander trees. Even its name suggests a plant and reflects its horticultural history. 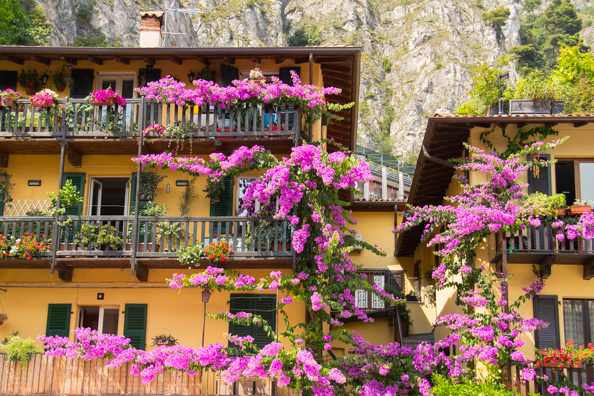 One theory regarding the origin of this town’s name is that it was named for the lemons that have been grown around Lake Garda for centuries. In 1599 Grattorolo in his History of the Salò Riviera was quoted as saying of Limone “long before any buildings existed, there was a lemon tree: when boatmen sought shelter from the fury of the wind, they said they went to the lemon tree.” Lemons were first imported to Lake Garda by the monks at the Saint Francis monastery in Gargnano. From there the cultivation of lemons spread to Toscolana Maderno. All these towns are at the southern end of Lake Garda. To grow lemons at the northern end soil had to be taken there from the south and lemon groves were built to protect the plants from occasional winter frosts. These groves, or limonaie, had walls, columns, stairs, doorways and beams. Panes of glass were fitted onto the latter. In Limone most of these buildings were built by the Bettoni family in the gardens of Garbéra, Reamòl and Nua. Limone became known as the “lemon town”, and its lemon groves were immortalized by painters, writers and poets. 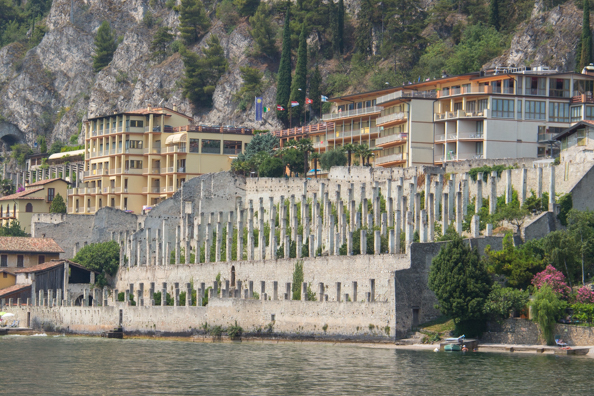 Limone was the world’s most northern point for citrus groves grown for commercial purposes and the export of these fruits to countries such as Germany, Poland and Russia brought work and wealth to the town. But this period of fame and prosperity was not destined to last. In the second half of the nineteenth century the trees were struck by a disease. Soon after that the town had to deal with competition from growers in Southern Italy after the country became unified in 1861. The distance of Limone from commercial ports was now a real disadvantage and cultivation was already becoming less profitable. In the First World War the materials used to cover the groves were requisitioned and then the exceptionally cold winter of 1928-1929 dealt the final blow and production ceased. But the memories linger on in the shape of the ruined groves that line the lakeside. One of these structures, the Limonaia del Castè now belongs to the local council. It was built at the beginning of the eighteenth century and has been owned by a variety of wealthy families until, in 1995, it was donated to the council. This property has been developed as an educational museum. 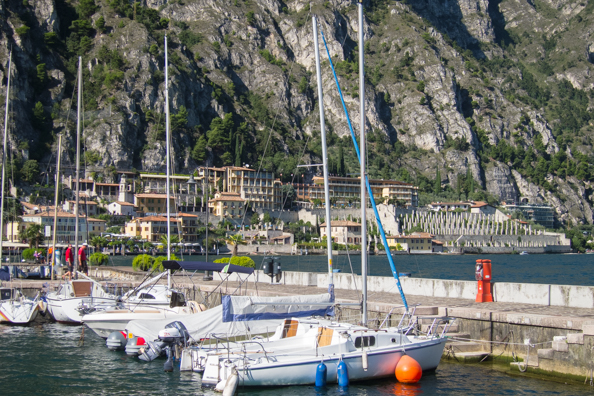 A second theory regarding the origin of the name relates to its position. Now on the border of two Italian regions, Lombardy and Trentino, it was once on the border between Italy and the Austro-Hapsburg Empire. Some claim the name of the town comes from the Latin “Limem” which means border. It is thought that the name Limone derives from the Latin word limes meaning border as the village was once on the Italian-Austrian border resulting in mixed fortunes for its inhabitants. While it was part of the Hapsburg Empire during the nineteenth century it was producing an impressive list of products such as magnesia, paper, quicklime and silkworms. But during the First World War, as it was right in the middle of the combat zone it was completely evacuated and when the inhabitants returned after the war nothing remained of their former prosperity so they began again as fishermen and olive growers. They were hampered by their isolated position as the village was accessible only by water or over difficult mountain paths. It was not until 1932 that Limone was connected directly with other towns on the lake following the construction of the renowned Western Gardesena Road which is still used today. This new road brought tourists to the area and this poor fishing village was transformed into one of the most prosperous centres on the lake. Olives are still grown there and, pressed cold inside a stone mill, these well-nurtured, hand-picked fruits produced a pure, high quality oil, delicious when dribbled over a piece of fresh bread. 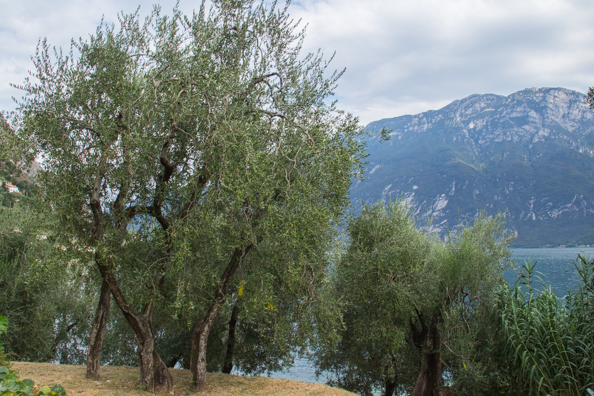 Limone has revived its fortunes once again – the construction of the perimeter road around the lake meant that this town, once isolated by water and mountains suddenly became easily accessible and has quickly developed into one of the most popular destinations on the lake. This rise to popularity is documented in the Museum of Tourism. This museum was set up in the former local council building on the shore of the lake to document the socio-economic changes in Limone after the opening of the Gardesana road the local council established a Museum of Tourism. Inaugurated in 2011 the exhibition includes old holiday posters, destination guides and souvenirs. There is also information about a famous citizen of Limone, Saint Daniele Comboni. He was born here in 1831 and canonised in 2003. Walking around the town the visitor may have notices various pictures and shrines to this bearded saint. Three years after being ordained as a Catholic priest Comboni joined a missionary expedition to Africa that included Khartoum, the capital of Sudan. Inspired by what he saw there Comboni worked tirelessly on projects to help the people of Central Africa. He was only fifty when he died in Khartoum in 1881, secure in the knowledge that his work would live on. And it does. For more than a century Comboni’s House, now the Comboni Missionary Centre has been a source to inspiration to both missionaries and lay persons dedicated to helping others. Anyone is welcome to visit this centre to learn more about their founder and experience its world of silence and prayer in contact with nature. This museum also documents a curious medical story that brought fame to this tiny town. During the late 1970s during a routine medical check-up doctors in discovered high levels of cholesterol in one of their patients (originally from Limone) but with none of the damage or symptoms that would normally be expected. Further research revealed that three members of the patient’s family and a small proportion of the population of Limone had a certain type of protein, Apoliprotein A1, that reduced the risk of cardiovascular disease. Despite being hailed as a breakthrough it has not yet formed the basis of any treatments. But my favourite exhibit has to be the bright yellow Vespa that epitomised the town. 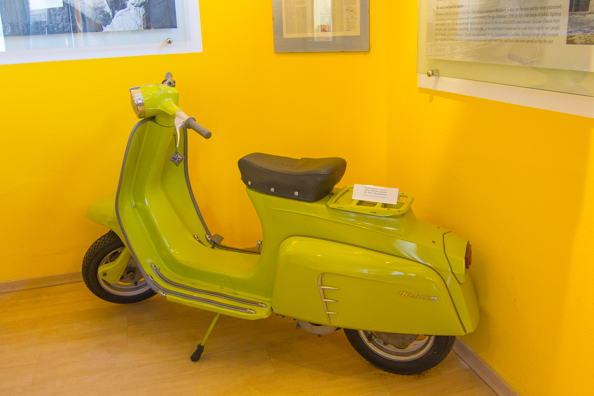 On disembarking from the ferry in the old port of Limone most visitors are attracted by the sight of the small, sixteenth-century church dedicated to San Rocco. Nestling amongst the old houses this small temple has recently been restored and it is worth the short climb up the hill just for the views over the lake. Two stone benches on either side of the doorway suggest that the little courtyard in front of the church was a popular meeting place for the villagers. The interior has an impressive fresco covering the back wall and depicting the Madonna with the Saints Rocco and Sebastian. 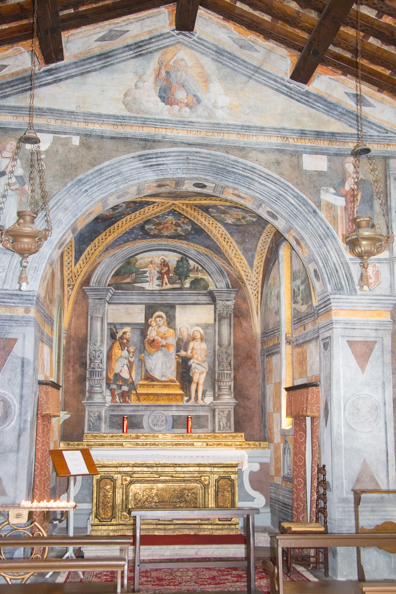 Visitors who want to experience the old fishing and olive growing village of the past do not have to wander far beyond the waterfront where restaurants and bars overflow with tourists indulging in ice-cream concoctions served in goldfish bowls. The back streets are a jumble of narrow, arched alleyways and stone buildings with splashes of colourful blooms. A lovely memory to take away with me. 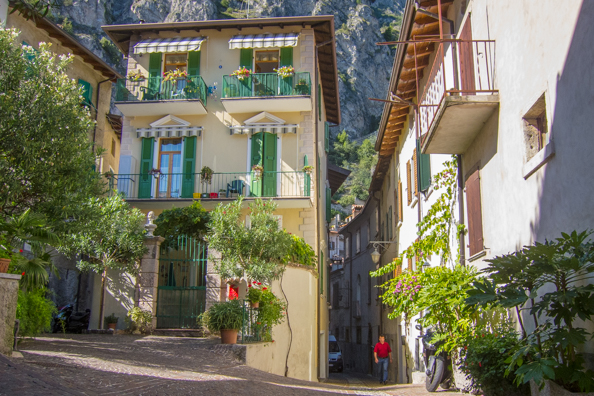 This article is now featured on GPSmyCity.  To download this article for offline reading or travel directions to the attractions highlighted in this article, go to Walking Tours in Limone sul Garda on GPSmyCity