I love to visit Malcesine on Lake Garda because it is home to one of my favourite restaurants – La Pace. As soon as I get off the ferry I push through the crowds lingering on the quay wondering what to do and where to go. I know exactly where I am going and work my way through the maze of narrow cobbled streets until I emerge into a small courtyard facing the water. As I approach Mohammed, the head waiter, catches my eye and waves. Within minutes I and my companions are seated outside the restaurant with a great view of the lake. I don’t need a menu as I always have the same meal – spaghetti alle vongole with a quarter of a litre of their light, dry white wine. Delicious. 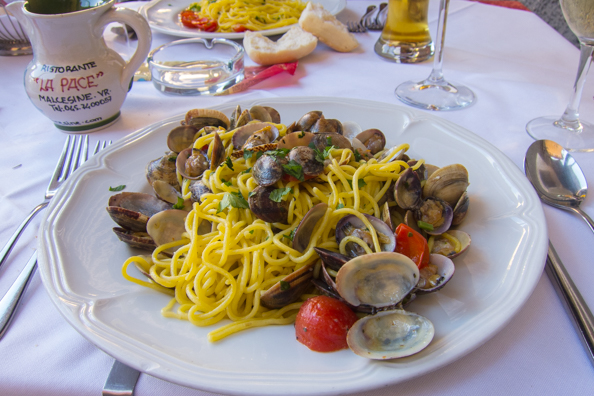 While we eat we watch the traffic on the lake, mainly the ferries. The wake from the ferries takes a long time to arrive at the steps in front of us. By this time the people sitting there have relaxed again and are taken by surprise when the water swirls around them. An itinerant musician arrives and soon the little piazza is flooded with melodies from his violin. It encourages us to linger a bit longer and enjoy a shot of Limoncello offered by the house. A very pleasant interlude before setting off to explore the little town that crawls up the hill behind us. 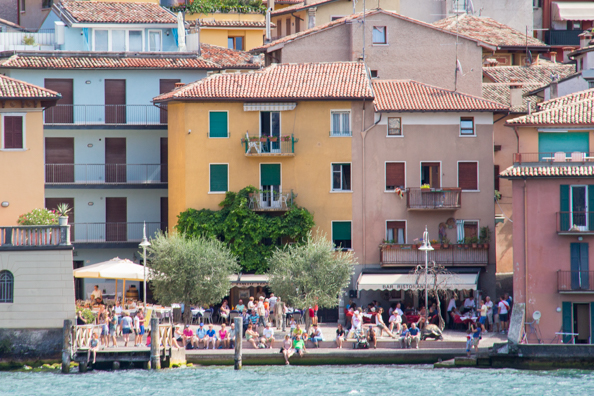 I walk up the hill to towards the Scaligeri Castle. Castles generally indicate the strategic importance of a town and in the past Malcesine has been fought over due to its commanding position on the eastern side of the lake. I pause occasionally to enjoy the panorama unfolding below me. It soon becomes clear why the Scaglieri family chose to build their castle here in the thirteenth century. This site that was originally fortified by the Lombards, the Franks and the Bishopric of Verona. 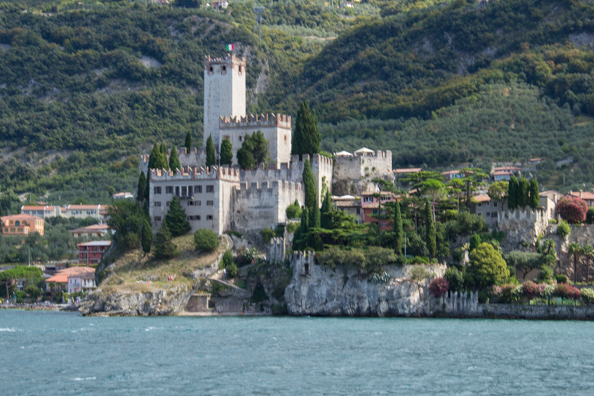 The castle has now been declared a national monument and it is open to visitors. I enjoyed wandering around the large rooms several of which are now available to hire for weddings and conferences. The views from the roof are spectacular. As I was on my way out I noticed a sign to the Museum of Natural History in the Casermetta of the castle. I was curious and went inside. The museum was completely re-furbished in 2008 and the nine rooms dedicated to the lake, the landscape and the mountains offer an entertaining and informative visit. I even found myself perched on a small stool at a child-size desk doing some of the inter-active activities. 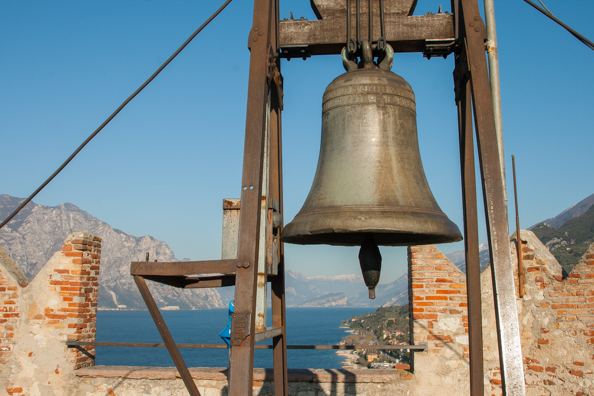 Having learnt all about Monte Baldo that towers above the castle I was sorry that I did not have time to go to the top and then walk down. But I knew from past experience that I did not have time that day. The revolving cable car is very popular with visitors and there are often long queues. The original cabin lift – a string of red cabins – was built in 1962 and carried millions of passengers up and down the mountain in both winter (to the ski resort at the top) and summer until it was replaced in 2002. The mid-station of the new, revolving cable car has the appearance of a space station where the lower section docks and a second cable car sets off to complete the journey to the summit. It is a strange sensation, gliding up and spinning very slowly at the same time. This cable car has now become the most regularly used in the world so you need to make sure you have plenty of time to enjoy the views and some light refreshments on the summit. 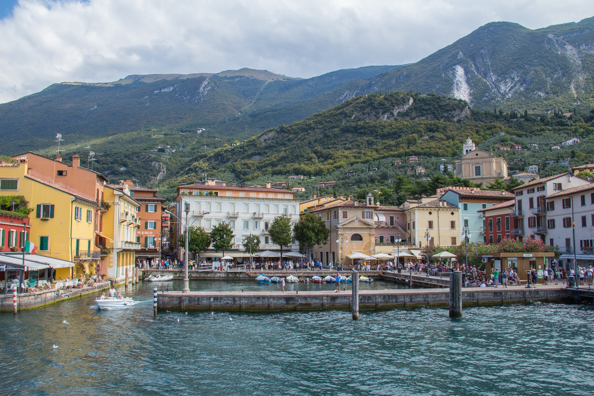 Making my way back to the port I could not resist a quick visit to the lovely courtyard on the lakeside of the Palazzo dei Capitani. This historic building was originally constructed by the Scaligeri family between the thirteenth and fourteenth centuries over some Roman ruins. It was re-constructed in Venetian Gothic style in the fifteenth century. In 1618 the town of Verona, at the request of the Republic of Venice, bought the Palace which became the headquarters and residence of the Captain of the Lake. This position was created when the Venetian rulers established a confederation of lake settlements known as the Gardesana dell”Acqua. In the mid-nineteenth century the town of Verona rented the palace to the town of Malcesine and by the end of that century it was sole owner of the building. The Palace was declared a National Monument in 1902 and since 1985 it has undergone several restorations restoring its ancient glory. A beautiful fresco decorates the ceiling of the large hall and visitors can walk through this hall to the garden outside on the lake shore which was used as a dock for the “ganzarina” the Captain’s boat. 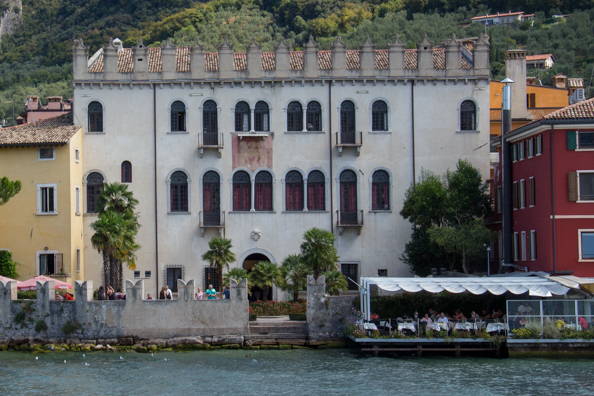 The main square, just above the port, is dominated by the church of San Stefano (Saint Stephen is the patron saint of the town). This site has been occupied by a religious building for centuries although it is believed the first building here was a pagan temple. The baroque building that stands there now dates from the eighteenth century and houses the remains of two local saints, St Benigno and St Caro. These saints were reputed to have lived in a cave at the foot of Monte Baldo. 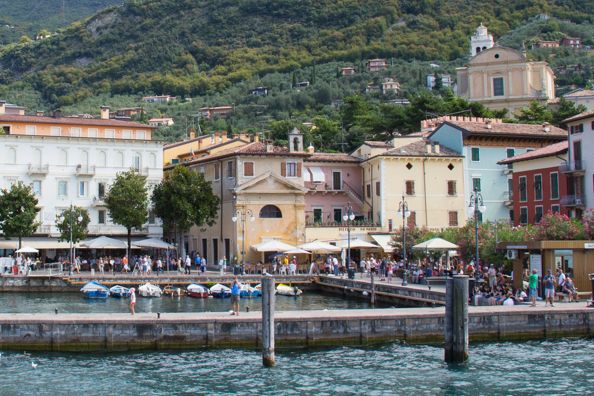 When I got back to the port Siora Veronica was unfurling her sails ready to take a trip on the lake. This sailing ship was built in the two years between 1926 and 1927 by several blacksmiths from Peschiera http://www.visitgarda.com/en/Peschiera-del-Garda-vacanze-lago-garda/?s=303 on Lake Garda. She was part of a fleet of “barges” designed to carry passengers and goods (oil, wine and livestock) between Riva del Garda and Desenzano before a road was built around the lake. These boats were also used for regattas. In 1930 a road was built around the lake and ferry services ceased to be profitable so these boats were used less and less until they ceased altogether when the Second World War started. Veronica was abandoned in the Harbour of Tuscolano – she was one of only two survivors of the original fleet of Lake barges. Despite her dilapidated state she was restored and re-equipped for cruises. She was re-baptized the Siora Veronica – Siora means Lady in the local dialect. 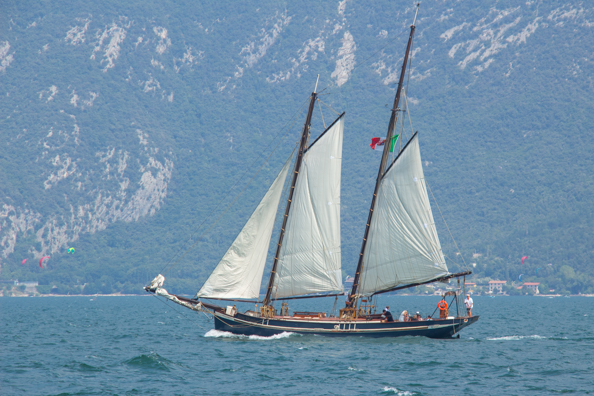 It would have been lovely to have left Malcesine under sail but it was the ferry for me and on to the next lakeside town – Limone.