Riva del Garda occupies pole position at the Northern end of Lake Garda in Italy. As you approach through the Valley of the Lakes colourful oleander bushes and silvery olive trees line the route. Beyond these field upon field of vines interspersed with patches of Kiwi fruits stretch as far as the eye can see. It is not long before the first evidence of the military history of this waterside town comes into view. The Bastione, a round, Venetian fortress, is perched on a high rocky promontory, Monte Rocchetta, on the west side of the town. This fortress, originally established in originally established in 1450, was rebuilt by the Venetians in 1505. The round shape they created was devised to avoid gun shots. It’s original purpose was to protect the settlement below but as the Venetian empire diminished and the French moved in during the eighteenth century it was destroyed and the remains have now been turned into a museum. It is a half-hour walk from the town and the reward on completing the climb up there is the beautiful panorama of the lake spread out below you. 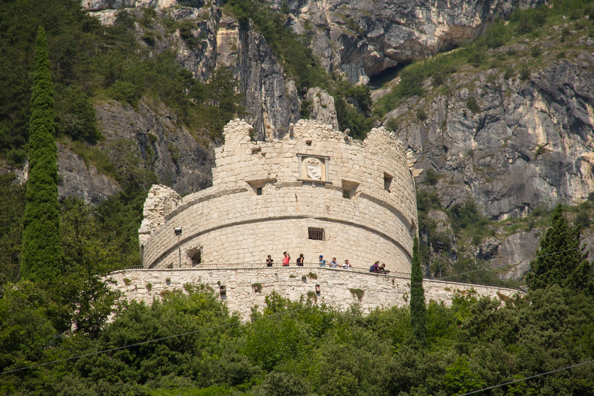 Historically, Riva del Garda, the second largest town on the lake, was a strategically important town. It controlled the northern half of the lake and also had an influence on trade routes north and south coming and going over the Alps. It’s not surprising therefore that much of its history and its important sights relate to wars and fortifications. Another old fortification is the town tower or Torre Apponale located in the heart of Riva del Garda, in the Piazza III Novembre near the waterfront. It was built in the thirteenth century as a means of protecting the access to the town from the water. The Torre Apponale is thirty-four metres high and during the summer months visitors can climb up to the top. A climb that is worth the effort for the views. However, visitors should remember that the large bell still chimes the hour which can be an uncomfortable experience. On the roof of this tower is the Anzolim (little angel) a weather vane and a symbol of Riva del Garda. 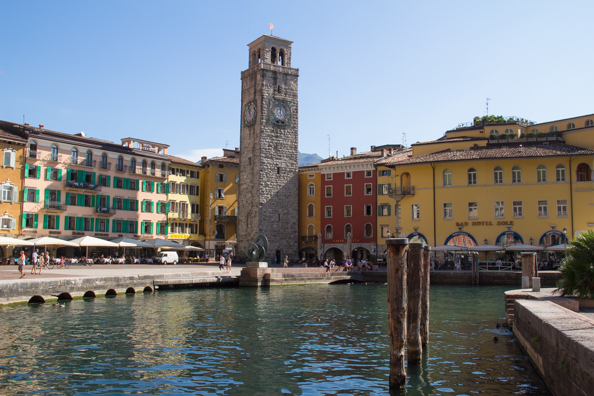 On the other side of this piazza is the Palazzo Municipal. For centuries this building has housed the Town Hall. There is an inscription on the its facade made from local stone that commemorates its construction by the Venetian Provveditore Francesco Tron in the year 1476. During the mid-nineteenth century it was increased in height and joined to the Palazzo Pretorio next to it. It is thought this palazzo was built in the fourteenth century by the Scaligeri family, once rulers of Verona. Justice was dispensed under its loggia and it was here the Provveditore, or magistrate, enforced the statutes of the town. 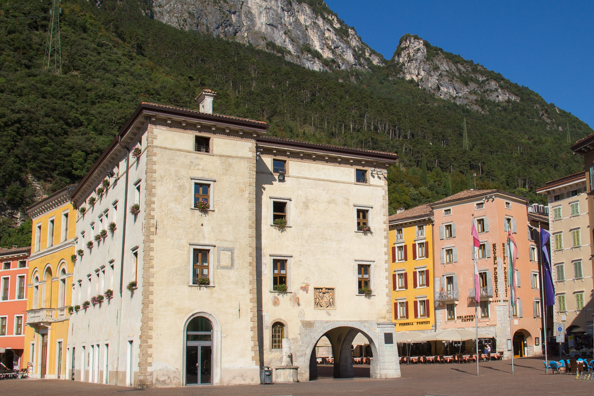 Further along the water-front is the town’s old fortress, the Rocca of Riva. The inhabitants of the town built this fortification on a small island in the lake to defend their city. Accessed across a drawbridge this fort has been altered and enlarged over the years and now provides a splendid venue for the civic museum which features changing exhibitions about the culture and history of the area. At one time the Rocca was connected to the Apponale Tower and the town around it via an underground passage. The current structure dates back to the time when the town was part of the Hapsburg Empire. They converted some of the original buildings into barracks for the Austrian forces. In fact, in common with the rest of the region of Trentino, this area only became part of modern Italy after the First World War. Indeed, the town was involved in this war being close to the front line which lead to some severe damage to its buildings at the time. 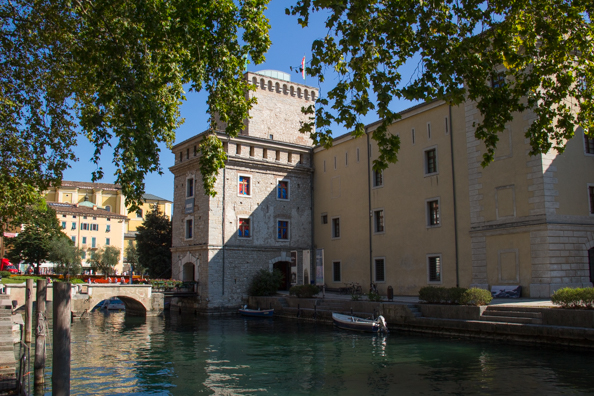 The water-front is lined with many welcoming tables and chairs shaded by sun umbrellas that front a fringe of hotels and restaurants and offer the visitor the opportunity to idle away some time over a welcome cappuccino. More active visitors can be seen peddling furiously across the water on coloured pedaloes or cycling along the wide promenade on their way to join one of the well-constructed cycle paths nearby. This area is dominated by an interesting memorial to the inhabitants of Riva who died in the two World Wars. 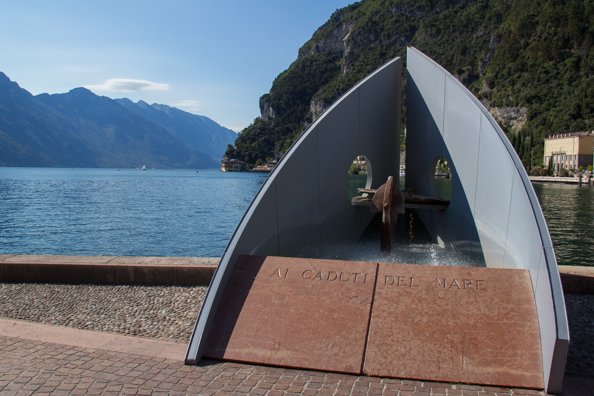 Since the mid-nineteenth century Riva del Garda has developed as a popular tourist destination. This began with the advent of “Kur” tourism in the German-speaking world (the closest to this in English is probably “taking the waters” in spa towns). The town became popular with nobility, the wealthy and the culturally elite such as Thomas Mann, Frederick Nietzsche and even D.H. Lawrence. This gave the town a refined air which it retains to this day. The little marina beyond Rocca is a flurry of activity in the afternoons when the little yachts set sail. The lake is famous for its winds one of which blows every day ensuring that sailors will get out on the water. Opposite the Rocca is a quaint little natural history museum called Reptile Land that features an interesting collection of reptiles and an enthusiastic owner who will relate the history of each inhabitant. A maze of narrow cobbled streets stretching back to the main road features the old Medieval gate, Porta San Michele, and a variety of specialist shops including leather goods, shoes and delicatessens. 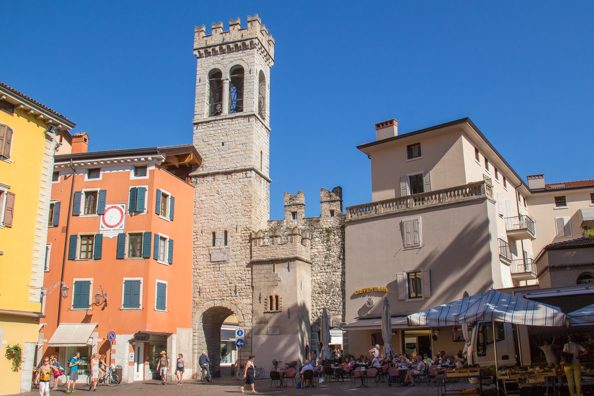 Riva is also a good starting point to explore other towns on the lake. The ferry port is at the foot of Monte Rochetta in front of the impressive Hydro-electric Power Station, Ponale, which was opened in 1926 by the famous Italian poet Gabriele D’Annunzio. Designed by local architect Giancarlo it was the first project to exploit the Ledro-Garda waters. This was the first project to exploit the five-hundred metre drop between the two lakes in adjoining valleys. 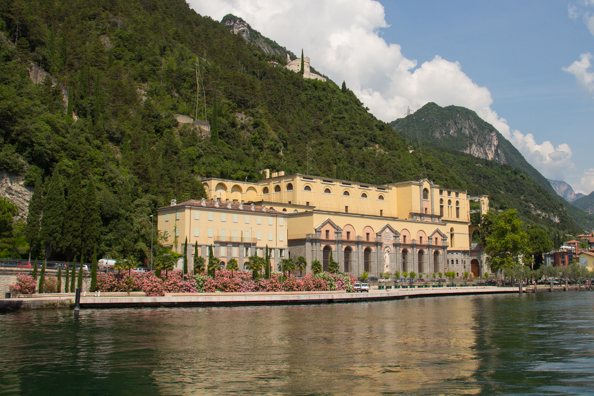 Ferries have criss-crossed Lake Garda for over hundred years. The most romantic of the boats of the boats on this service is one of the original paddle steamers G Zanardelli, a lovely old boat. This elegant reminder of days gone by and had strategically placed glass panels on board allowing passengers to watch the wheels churning. As the ferry pulls away from Riva del Garda passengers can enjoy a spectacular view of the Dolomite Mountains plunging into the icy blue water of the Lake Garda. 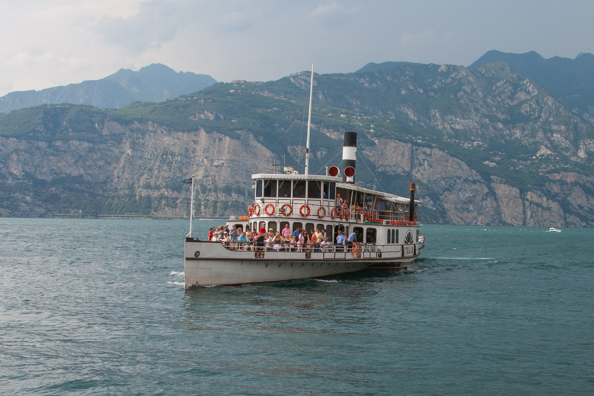