Pinzolo - A Traditional Town in the Italian Dolomites 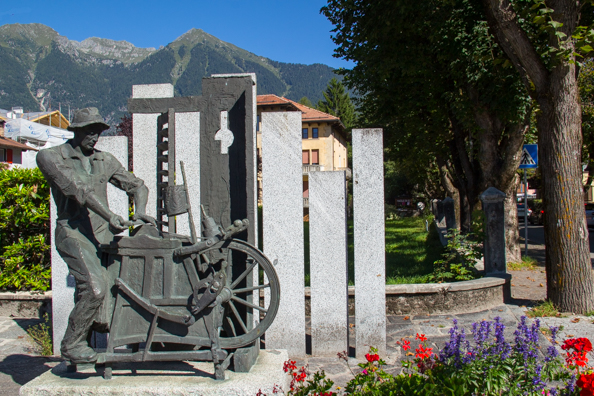 Before tourism arrived in the area timber had been the most valuable resource. Six saw mills were in operation along the banks of the River Sarca that passed through Pinzolo as it wound its way through Val Rendena. When the mills were mechanised there was a need for skilled men to sharpen the blades. Many of the local men learned this skill, too many for the work available. The work was seasonal as the mills could not operate in the winter as the weather was too severe. These skilled workers were forced to find work further afield. Loading their sharpening equipment onto the barrows they had made they travelled, on foot, to large cities in Italy, and beyond. They would go from door to door offering to sharpen knives. Initially, these knife grinders or moleta would return to Pinzolo in the winter to work in the saw mills. But, as they built up regular rounds for their knife grinding many of them moved away or emigrated. Times were hard for those who remained in Pinzolo and they sought help from their relatives abroad. Many of these families survived thanks to the money that was sent home to them. When the local mountains became a popular place for skiing and walking these families were able to benefit by building hotels and holiday apartments, as well as setting up bars and restaurants and opening shops. As the area prospered many of the emigrants returned to live and work in the area once more. Set into the pavement beside the road into the centre of town is a line of granite stones. Each one has the name of a town carved on it. There are eighty-nine of them and they start in Trieste and finish in Wellington, New Zealand passing through places such as London, Lucerne and Chicago on the way. Each of these towns had received knife grinders from Pinzolo in the past. 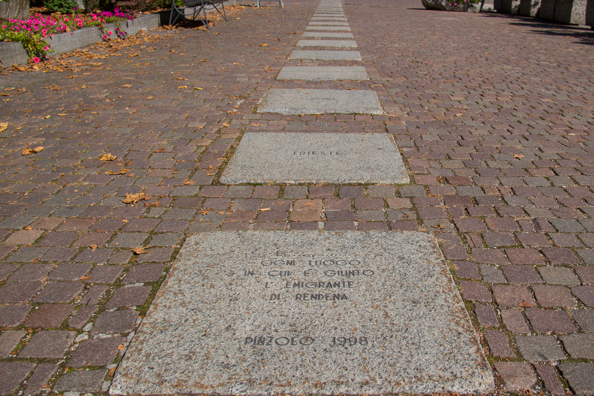 As I reached the last paving stone I could see, to my right, a striking monument set amongst the grass and trees of a small park. This monument was put here by SAT (Trentino Mountaineers Society) and dedicated to the patriot Nepomuceno Bolognini who, together with Prospero Marchetti founded SAT in 1872. This monument is formed by two peaks joined together, symbolizing the two big loves of Bolognini his Mother Country and the Mountain. 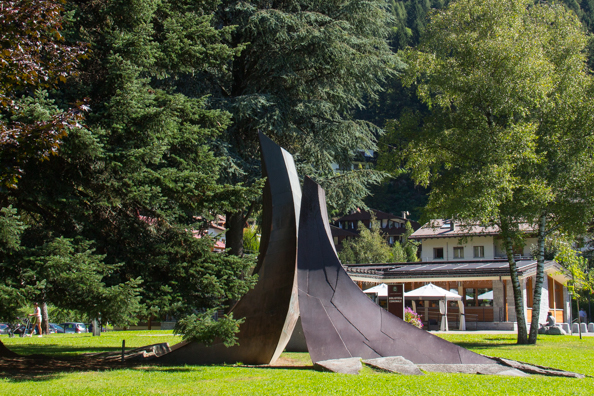 As I approached the centre of town I found the delightfully old-fashioned delicatessen Alimentari Caola. I peered through the open door and when I saw the old-fashioned meat slicer on the shelf behind a cabinet full of local cheeses, hams and salami I had to go inside to explore further. I was greeted warmly and invited to go downstairs into the cellar to try some of the cheeses and hams. The shelves were stacked with an amazing variety of products from local grappa to local honey. 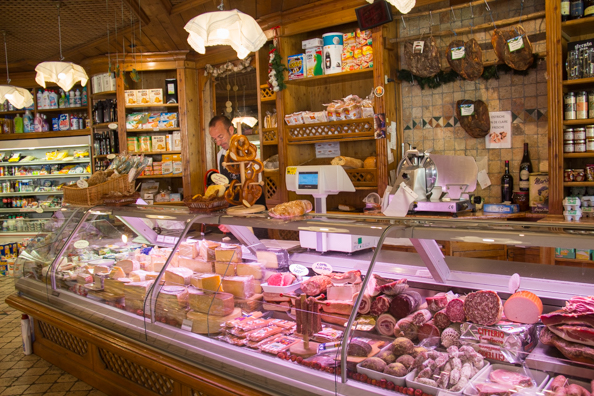 It was Wednesday, the day of the weekly market and I found the start of the market at the other end of the town. It filled one long street and I browsed the stalls, mostly clothes, some shoes and some fresh vegetables. I resisted the temptation of freshly fried chips from one of two food vans preferring instead a quick, restorative expresso in the cool interior of a bar.

When I emerged from the bar into a small square, Piazza San Gerolamo, I spotted a tiny chapel surrounded by market stalls. This charming chapel is dedicated to San Gerolamo and has a very interesting history. The chapel was built in the Middle Ages and was used by a local order of monks to collect offerings to support the Hospital of Santa Maria di Campiglio further up the valley that offered care and shelter to travellers through the valley – the main route from northern Italy to Rome. The chapel is privately owned and is still very important to the local community. 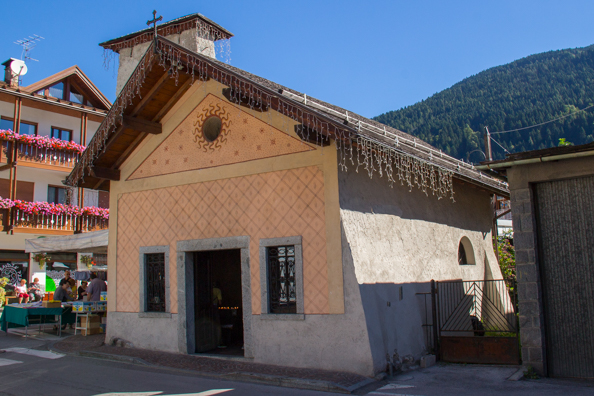 The pretty interior of this little church features a gilded wooden altar from the seventeenth century. Incorporated into this altar is an image representing San Gerolamo translating the bible into Latin. 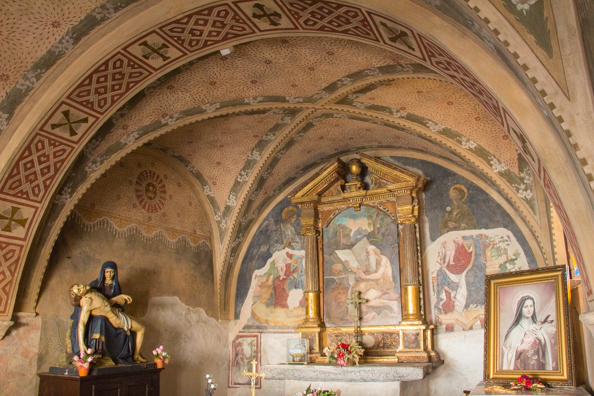 Piazza San Gerolamo also features a drinking fountain and trough, a common feature in small mountain towns in this region, Trentino. But not so common is a scarecrow doing its laundry there. Beside the scarecrow was a poster advertising the annual week-long festival of the cow or Giovenche di Razza Rendena. Prior to this week of festivities scarecrows appear around the town. The programme includes various events featuring the local breed of cow, the Rendena cow, specially adapted to graze the Alpine meadows. A grand parade is held on the Sunday when the finalists for the title Cow Queen – fifty cows – walk through the town accompanied by the town band and decorated floats. 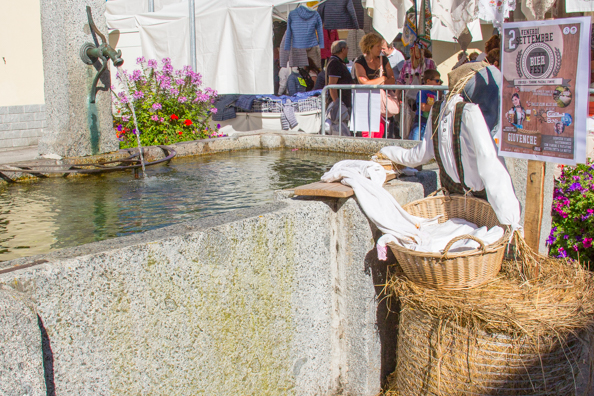 On my way out of the town I passed the cabin lift that rises to a mid-station and from there the journey continues in a chair lift to the top. From here visitors have great views to the resort of Madonna di Campiglio ringed by the Dolomite Mountains above Pinzolo and the valley below. But I would have to save that treat for another day as I wanted to get to the church a little further along the road. The Church of San Vigilio was founded in 1362 and later expanded in 1515. It was built with granite stones from Val Genova and decorated inside with wooden altars and marble from Ragoli. Its Medieval facade is covered in frescoes of different periods. The most important of these is a frieze representing the famous Dance of Death. When Simone Baschenis was commissioned to do this painting in 1539 he decided to approach the subject differently. Instead of portraying a dialogue between the living and the dead his version is a monologue recited by the dead. This frieze and the frescoes inside the church are the most important series of paintings by this artist. 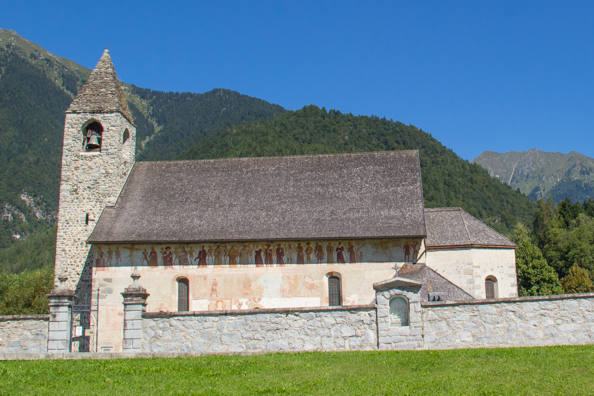