The medieval town of Montecatini Alto (Upper Montecantini) in Tuscany is two hundred and ninety metres above Montecatini Terme. I know because I have walked every one of them both up and down. But it was worth every step to explore this hamlet frozen in the past yet embracing the present. Montecatini Alto is spread across two hills both originally built for defensive purposes. It is hard to believe, as you stroll through its narrow cobbled streets, that due to its strategic position this little town had a very turbulent past. 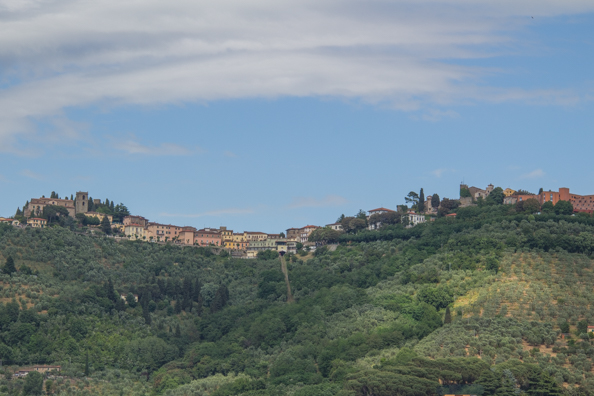 The town was fortified in 1016 when it belonged to the Bishop of Lucca and the guilds of Maona and Montecatini – guilds had a very important place in Medieval history. By the end of the twelfth century the town had developed into an independent commune with its own constitution. It allied itself with Lucca against Pistoia, its neighbour and later in the wars against Florence. It was finally captured by Florence in. During the sixteenth century it became involved in the feud between Florence and Siena. The town was captured by Siena but it was not long before it was recaptured by Florence. All the battles that had raged around the town had taken their toll and its fortress had fallen into disrepair. After Florence regained control of the town Cosimo de Medici ordered his troops to “destroy the foundations” of the town. For two days and two nights eight hundred Florentine soldiers destroyed the city walls, the towers and the houses. They even took away the doors and their windows and when they had finished very little remained standing of this once powerful, walled city. Plans to establish thermal baths at the foot of its hills were abandoned and it deteriorated into an unhealthy swamp. When the spa resort of Montecatini Terme was developed it revived the fortunes of Montecatini Alto. It was a popular place to visit at midday between spa treatments. Some of the twenty-five remaining towers were incorporated into the built up area. 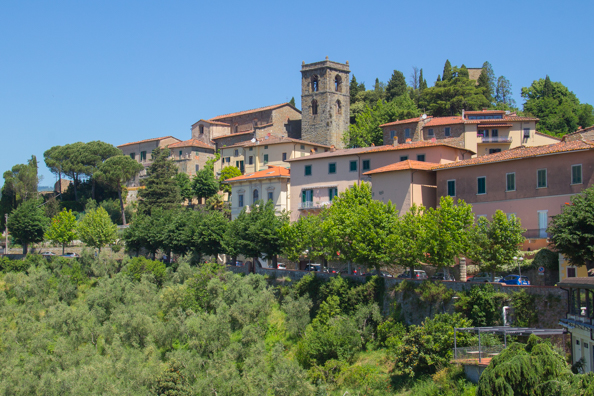 I could have risen up the steep escarpment in the funicular which has been transporting people between the two towns for over one hundred years. The original little red carriages still run regularly between the two towns from Station Monte at the top to Station Valle at the bottom – both still delightfully old fashioned. When it opened in 1898 these carriages were operated by a large steam boiler located in the uphill station, Monte. In 1921 this was replaced by a powerful electric motor. The railway was damaged during the Second World War and ceased to operate in 1944 but it was restored in 1949. By then it was very popular with visitors to the spas in Montecatini Terme who liked to go up to the “castle”. It had to be upgraded in 1977 and re-opened in 1982. There are two cable cars called, Gigio and Gigia, which do the journey in eight minutes, pulled up by a steel cable. These carts once carried the great composer Giuseppe Verde to the very top so that he could enjoy the quiet environment in Montecatini Alto and the wonderful panorama of Valdinievole, the area in which it is situated. There is a plaque in the town recording Verde’s opinion that these were the most beautiful views he had ever seen. 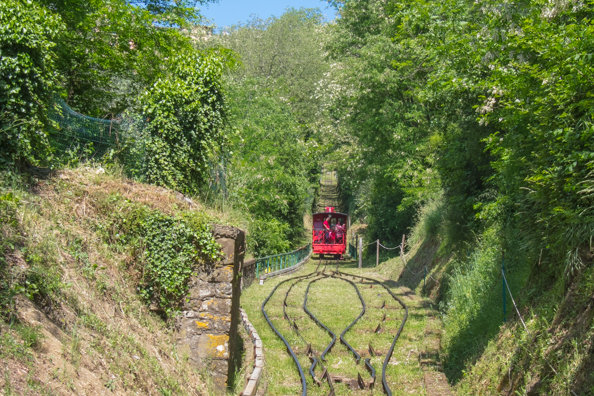 After pausing the admire the views from the terrace by Station Alto most visitors make their way to Piazza Giusti. This charming little piazza, ringed by restaurants, bars and the occasional souvenir shop is name after the the well-known Italian Risorgimento poet Giuseppe Giusti, Although he was born in Monsummano throughout his life Giusti thought of Montecatini Alto as his home and spent as much time there as he could. A plaque in the square records his affection for this town. Piazza Giusti is the site of some very old buildings that have been tastefully modernised to blend with the inevitable tourist facilities. Look up as you enter this square and you will see the Tower of Ugolino Caccini. It is named after the man considered to be the father of modern hydrology who recognised the healing powers of the waters that now flow into the spas of Montecatini Terme. Opposite the tower, in between two restaurants is a tiny chapel built into the Tavarnelli tower and dedicated to the fallen in two World Wars. The beautiful, pastel coloured building at the top of the square is the historic Parlascio that was once part of a complex of municipal buildings but is now known as Teatro Risorti. The first floor is still used as a theatre and it this is the very same theatre where the actor Guido Riccioli had his debut. The ground floor is a cafè, Le Maschere. This piazza is a beautiful blend of ancient and modern and a lovely venue for a leisurely lunch. My favourite restaurant is Il Giardino where you can enjoy good food in the garden terrace at the back with sweeping views of the Tuscan countryside. 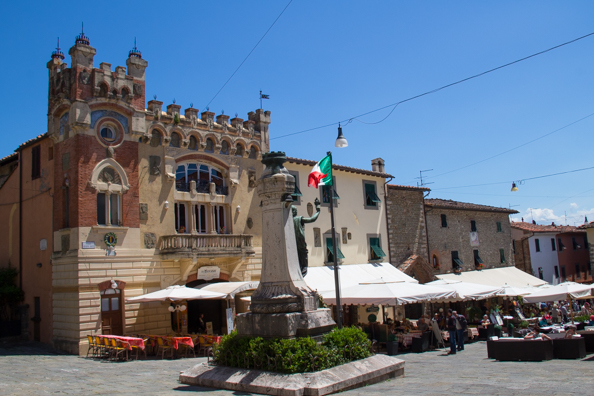 Head up the hill out of Piazza Giusti and you will come to a tower, this is the Torre della Campanaria one of only two towers to remain intact, the other is the Torre dell’Orologio (Clock Tower) that tops the opposite hill. Immediately behind this tower is the church of San Pietro. This church was built on the remains of the ancient castle church dedicated to St. Michael Archangel and it is dedicated to St. Peter Apostle. The architecture is Romanesque in style although the original structure is hidden by the Baroque-style treatment it sustained during the eighteenth century. Inside there are many works of art and also the entrance to the Museum of Religious Art. Around the corner from this church is a rather unusual shrine dedicated to Saint Barbara the patron saint of attendants in charge of explosives, preparation and storage and more generally, she is invoked against lightening, fire, sudden and violent death and danger. She is the protector of the Italian Military Navy, the Fire Brigade, the Army (Artillery and Civil Engineers) as well as of the miners and oil workers, geologist, mountain men, architects, bell ringers, towers and fortresses. To honour this saint, a canon and other accoutrements of the activities she represents are on display here. 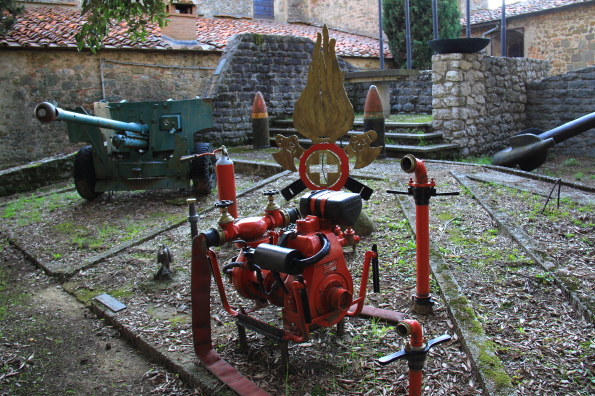 The ruins of Rocca di Castel Vecchio or Tramontana are close to this church. There is not much left of this old stronghold but it is a reminder of the town’s journey from prominence to pretty. In contrast there is n nothing to see of the second castle on the hilltop opposite. Any remains have been incorporated in the residential buildings that now occupy its site. 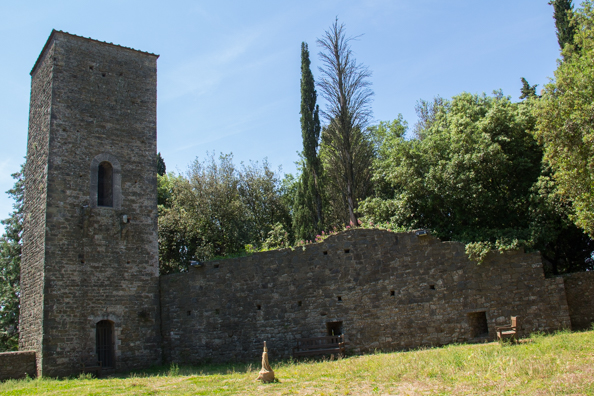 Atop the second hill is a very different scenario. The only significant buildings are the Clock Tower or Torre del Carmine and its church, Chiesa del Carmine which houses a photographic exhibition showing photographs of Montecatini Alto over the past one hundred years. It has not changed at all. 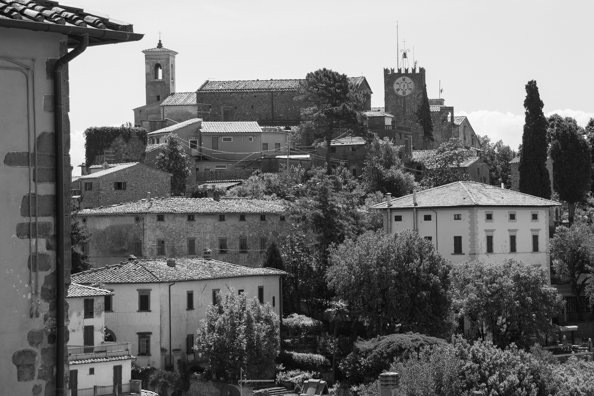 This article is now featured on GPSmyCity.  To download this article for offline reading or travel directions to the attractions highlighted in this article, go to Walking Tours in Montecatini Terme on GPSmyCity