My first aerial experience was at the top of the Alpspitze. But first we had to get there. Like excited children we pressed our noses against the Perspex window of our little cable car. We pointed out some landmarks below as we rose above the Bavarian town of Garmisch-Partenkirchen. We traced the road we had taken from Marienplatz in the town through the green fields to the bottom of the Kreuzeckbahn cable car which was clearly visible despite the white clouds suspended above them. 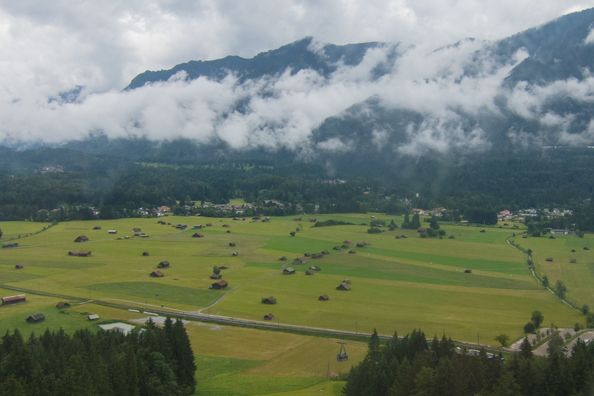 Our chosen route is known as the Garmisch Classic, a combination of cable cars and footpaths that would take us to the top of the Alpspitze, one of several limestone peaks around Garmisch-Partenkirchen. This range of mountains, known as the Wetterstein Mountains, forms part of the Northern Limestone Alps. The Wetterstein marks the border between Germany and Austria. These mountains are continually eroding due to the forces of nature and in particular the water that seeps into the porous rock creating caves and other, often strange formations. As we wandered along the paths of the Alpsptize we paused frequently to admire the natural beauty of these strange shapes. 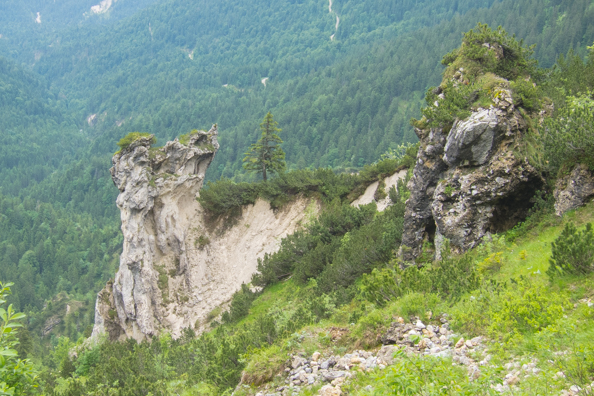 At the top of the Kreuzeckbahn we had two choices – walk up to the top of the Alspitze or take an easier path to the bottom of the Hochalmbahn cable car and ride up to the top. We chose the latter having assessed both the path and the weather. It really did look as though it might rain. When we reached the top most of us resisted the temptation to retreat into the warmth of the restaurant Alspitze am Osterfelderkopf preferring to walk the short distance up to the viewing platform known as the AlpspiX. This extraordinary structure is formed by two steel beams that stretch out into the empty void a thousand metres above the valley below. The open slats of the floor made me feel as though I was floating above the mountains but it was not designed as an aid to an adrenalin rush but rather as an escape route for the snow that piles up on it in the winter. The views are stunning but exposure to the cold air soon drove us back down to the restaurant and a bowl of warming soup. We had been given ample warning that it would be much colder at the top but in the warmth of the village below it had been difficult to appreciate how much colder – a woolly hat and a pair of gloves would have made all the difference. 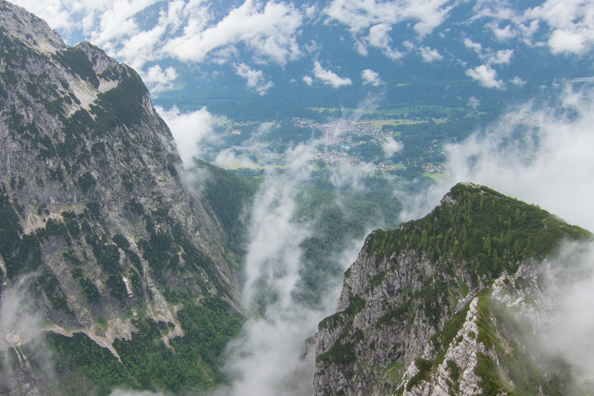 As the sun had broken through the clouds by the time we emerged from the restaurant and made the path below us look so inviting we decided not to take the Alpspitzbahn cable car all the way to the bottom but to walk back to the top of the Kreuzeckbahn cable car and go back down on that. This three kilometre walk is known as the Genuss-Erlebnisweg or Pleasure Adventure Trail – a journey of discovery for the senses. This walk is an adventure for walkers of all ages and introduces us to the Stone Kingdom of the giants of the alpine peaks. We can stand in their footprints, sit on their giant throne and laze on their sunbeds. Time passed very quickly on this trail and we were soon gliding back down to the valley floor on the Kreuzeckbahn cable car. Our timing was superb and the local bus was there waiting to take us back to our starting point in Garmisch-Partaenkirchen – and free with our Gapa card which was proving to be a good investment. 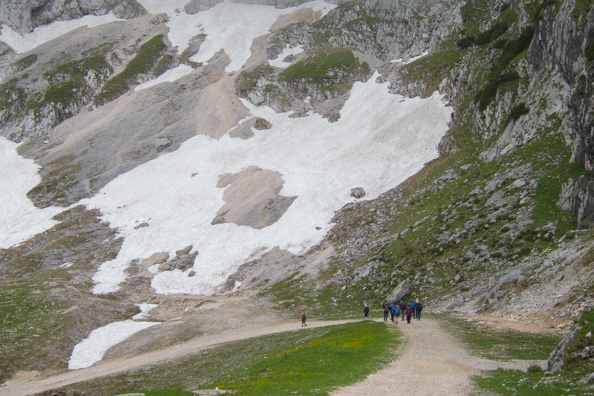 My second aerial experience involved the highest peak in Germany, the Zugspitze, which also looms high above Garmisch-Partenkirchen. It is the highest mountain in Germany and as such has always enthralled both locals and visitors. So much so that the idea of building a railway up this mountain was already being discussed by the end of the nineteenth century although the Bayerische Zugspitzbahn was not completed until 1930. In order to construct the railway a 4.5 kilometre tunnel was blasted through the mountain by means of a rack railway. The mountain train originates from its own station next to the mainline station in Garmisch-Partenkirchen. We had an early start and walked through Garmisch arriving at the station in time to catch the first train of the day as the trains do get very busy. For the first part of the journey we chugged across the valley floor by-passing several hamlets (some stops are on request only) enjoying the pastoral scenery and a glimpse of St John’s church in Grainau with its unusual churchyard. 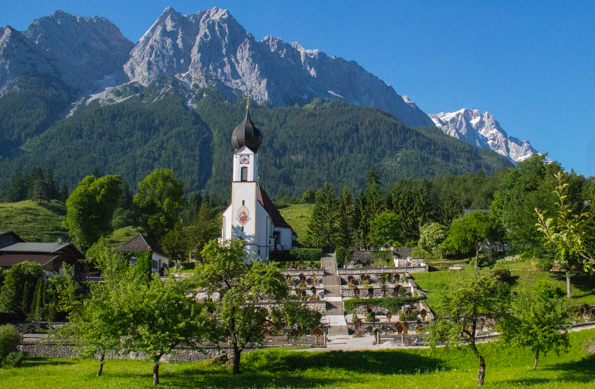 The mountain section begins at the foot of the Zugspitze at the Grainau station, Originally this would involve a change of engine but now the railcars can work the length of the line. From Grainau the line climbs steeply up the mountain and passengers have great views of the Eibsee Lake (right side of the car when ascending). When the train reaches the halt at Riffelriss it enters the Zugspitze Tunnel for the final stage of its journey. The train terminates at Sonnalp in the middle of the glacier, the Zugspitzplatt. 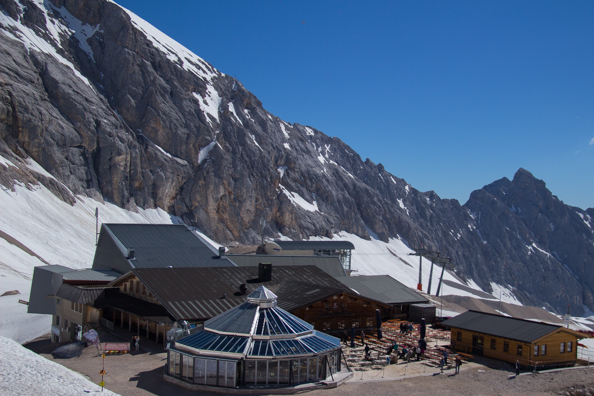 Apart from sitting on the sunny terrace of the Sonnalp restaurant enjoying a beer while taking in the views there are plenty of things to do here. A viewing platform stretches out into mid-air above the snow-covered valley below – a popular snow-sure destination for skiers in the winter. The more active visitors can try tobogganing (free) or climb up to the Maria Heimsuchung Chapel. the highest chapel in Germany. It was consecrated in 1981 by Pope Benedict XVI. 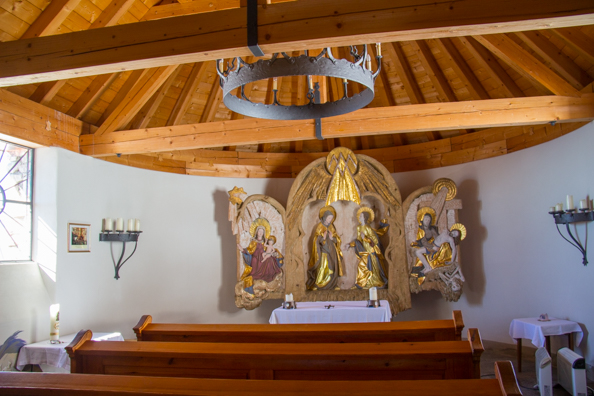 We did not linger on the glacier too long as we had yet to reach the summit of the Zugspitze. The Gletscherbahn cable car whisked us up there from the Sonnalp station. Re-united at the summit we did a circuit of the viewing platform and had a group photo taken by the automated camera set up there for this purpose. Later we checked our photograph on the computer outside the souvenir shop and then bought postcards of ourselves. Another highlight is the Fascination Zugspitze, an interactive museum that explores four different aspects of the mountain. 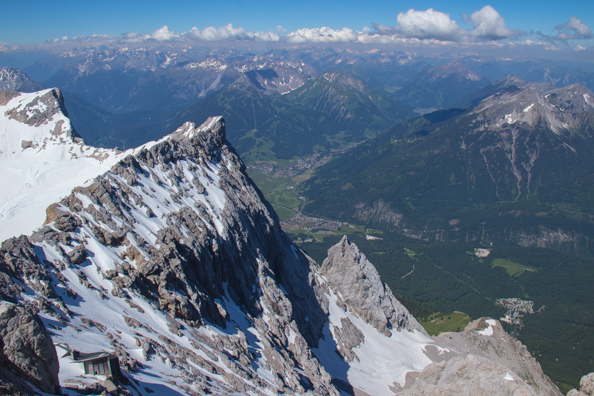 From our vantage point on the viewing platform we could see Eibsee Lake far below us and decided to return to Garmisch-Partenkirchen via the lake as we could take the Eibsee-Selbahn cable car down to the lake and then get the mountain train from there. All options were covered on our return ticket. We got separated on this leg as the cable car was not running according to the timetable but just going up and down according to demand. We all met for lunch in the Eibsee Restaurant perfectly situated at one end of the lake. As it was such a lovely day some people went swimming in the lake and some of us walked around the lake. The lake is beautiful with little islands in the middle and two smaller lakes on its perimeter. These small, shaded lakes with green water would have been a perfect setting for a fairy story. 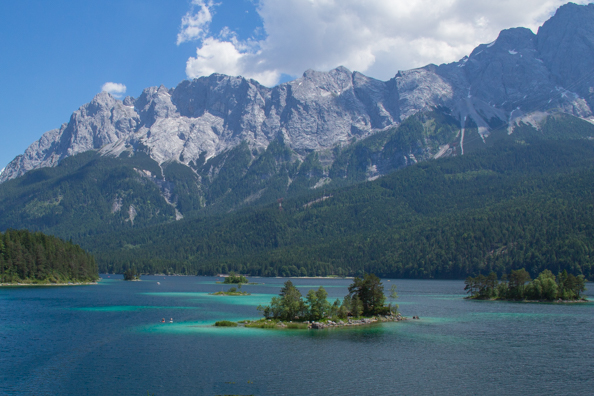 As the day drew to a close we made our way to the mountain railway station by the Eibsee Lake and caught the train back towards Garmisch. Instead of going all the way into the town we got off at Hausberg and then walked back into the town passing by the verdant pastures. The Zugspitze towered above us. That night, the third Saturday in June, bonfires were lit on summit of Zugspitze and the surrounding mountains to celebrate the summer solstice, a memorable end to our time in Bavaria. 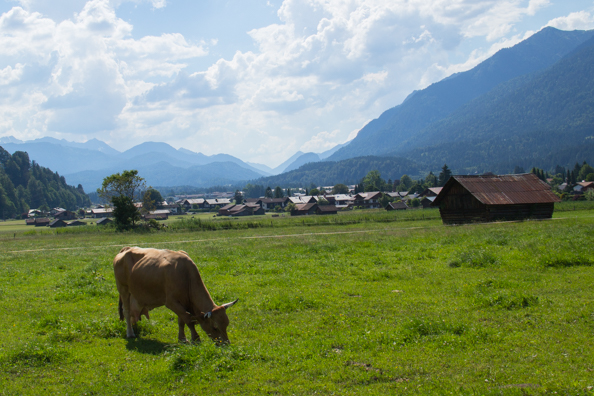 For more attractions in both Bavaria and the rest of Germany I can recommend this interesting and very comprehensive article, 100 Things to do in Germany