Polignano a Mare in Puglia certainly lives up to its name ‘at sea’ as it is perched on the white cliffs of a rugged coastline. Its origins date back to the fourth century when Greek settlers founded the city of Neapolis. The city continued to flourish when the Romans. So much so that the Roman Emperor Trajan built his Via Traiana through the town and there are remains of this road north of its historic centre at the the archaeological site of Santa Barbara. I did walk along the road out of town to visit this archaeological site and discovered a field ablaze with wild flowers partially concealing two columns of a small arch and some ancient rubble. I would never have worked out that these were thought to be the remains of a Greek known as Neapolis – a theory supported by coins found on the site. It was renamed Polis-Nea (New City) then Polineanum which became Polignano and finally Polignano a Mare – the inspiration of a local notary. 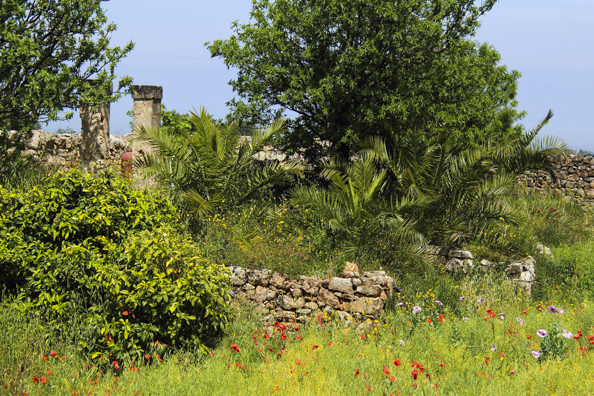 This enchanting place has several claims to fame – cliff diving, the birthplace of a famous composer, a unique cave restaurant and it is surrounded by beautiful countryside. I visited the town in the spring when the fields of olive trees lining the approach roads were a blaze of colour. 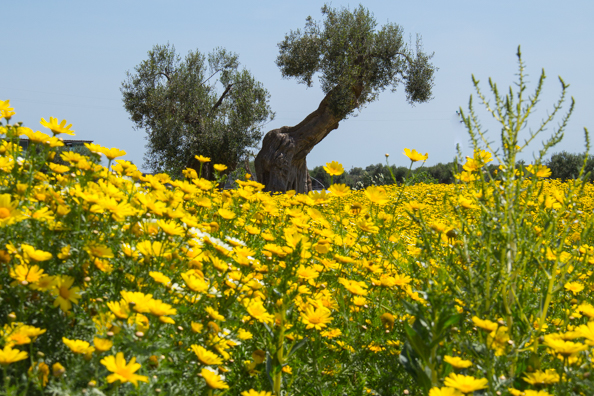 At the far end of the town is a lovely beach, Spiaggia Lama Monachile, surrounded by cliffs. It is not only the locals who clamber onto these rocky pinnacles to dive into the depths of the blue waters below. Since 2009 the town has hosted several events in the Red Bull cliff diving world series when around forty-five thousand spectators flock to the town to enjoy this spectacular event. 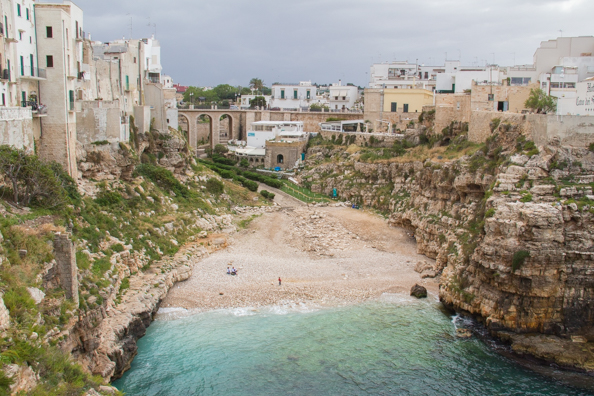 Very close to this beach, arms flung wide mid-song is a statue of this town’s most famous son Domenico Modugno . He dominated the music scene from the fifties to the early nineties and also wrote the famous song Volare. Originally entitled Nel Blu Dipinto di Blu this song won the San Remo music festival in 1958. In the same year Domenico sang Volare representing Italy in the Eurovision Song Contest and came third.
!/admin/resources/statue-of-domenico-modugno-in-polignano-a-mare-puglia-3978.jpg(Statue of Domenico Modugno in Polignano a Mare, Puglia)!As it was Thursday the weekly market was in full swing and that was my next objective as markets in Italy start closing down at lunchtime. I passed the small daily indoor fruit and vegetable and could not resist the temptation to have a quick look inside. The stalls were overflowing with fresh produce and the air was filled with fruity aromas and chattering voices. Puglia is well-known for its fresh fruit and vegetables and in particular broad beans which are eaten raw or made into a pate and eaten with fresh bread. The mountain of fresh strawberries proved irresistible and I bought some to munch as I wandered down the road to the street market. Hundreds of stall holders gather here from all over the province and their wares cover everything you could possibly need. 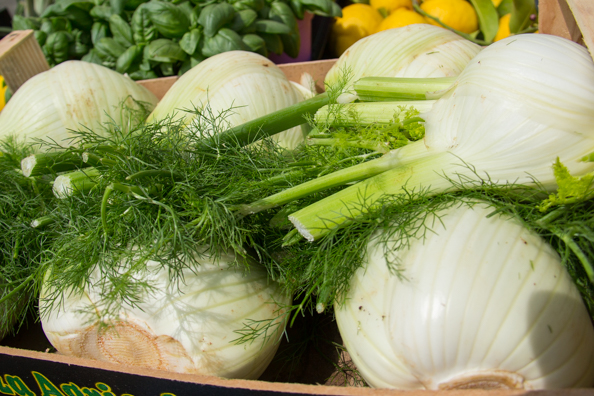 Leaving the market behind I followed the signs to the Lungomare Cristofero Colombo (promenade of Christopher Colombus) as my main objective now was the old town of Polignano a Mare. It seemed sensible to make my way to the sea front and stroll along its lovely wide promenade. I enjoyed meandering along a rugged coastline punctuated by coves and caves. There was no-one around apart from the occasional cyclist. I realised that everyone must have gone home for lunch. 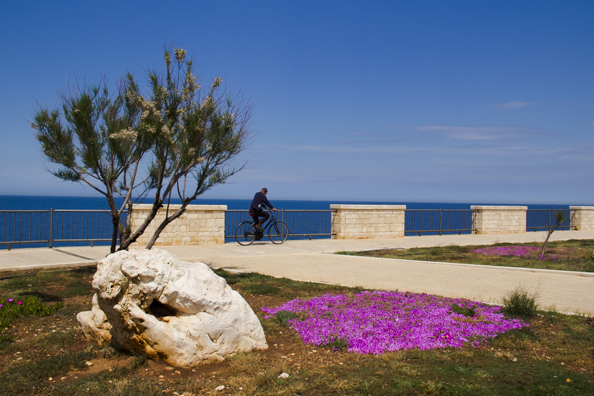 As I approached the old town a beautiful panorama began taking shape ahead of me – white buildings of the old town perched on the top of sheer cliffs that plunged into the glittering sea below. In one of the caves that punctuated these cliffs was this town’s world-famous restaurant in a cave, Grotta Palazzese. and I had already decided to treat myself to lunch there. 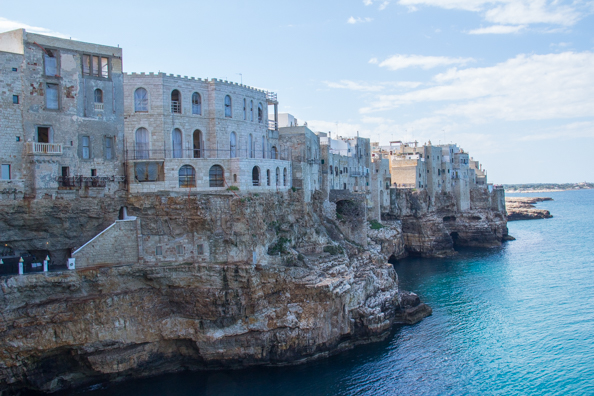 I knew the restaurant was below the narrow street that I was following towards the centre of the old town but I could not see any signs so I requested directions from a local man lounging on his doorstep. Re-tracing my steps, I found the small hotel entrance and inside that a flight of steps that took me down into the depths of the cliffs. I followed a narrow path cut into the cliffs that led me into a large cavern set out as a quality restaurant. I was shown to a table in a unique and beautiful setting. I could hear the sea splashing onto the rocks in a cavern close to my table. 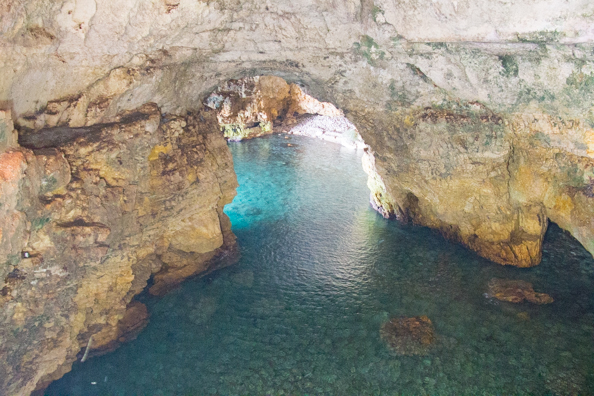 I had to swallow hard when I saw the prices on the menu but I had promised myself this treat. And my meal was worth every centissimo. The combinations of flavours read like an episode in a cookery programme and tasted exquisite – Tagliolini con Ragout di Angelo, Pomodori gratinati e Finocchietto followed by a sensational mango-flavoured semi-freddo. 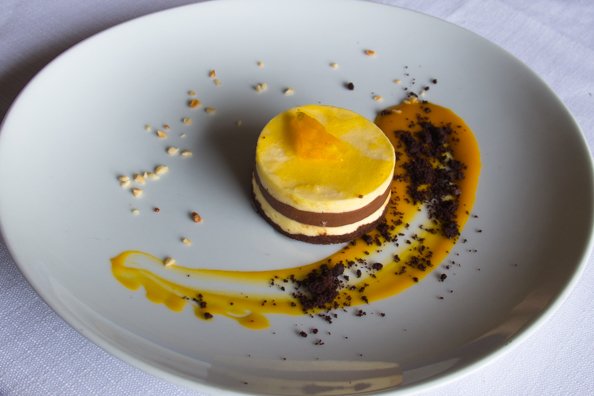 The old town was waking from its siesta as I emerged once more into its narrow streets. A rabbit-warren of streets and alleyways converge on its largest square, Piazza Vittorio Emanuele, which is dominated by the most important church there, Chiesa Matrice dedicated to Santa Maria Assunta. I went inside to have a look around and found an unusual life-sized nativity scene in there. 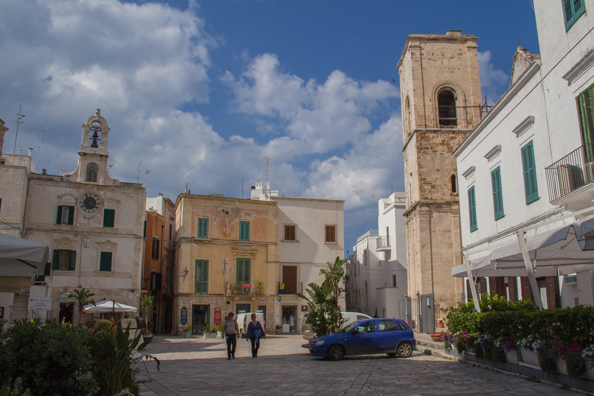 During my further explorations I tried to get photos of the churches but it was very difficult as the streets were so narrow. However, I amassed a nice collection of roof top images including the colourful dome of the Chiesa del Purgatorio. 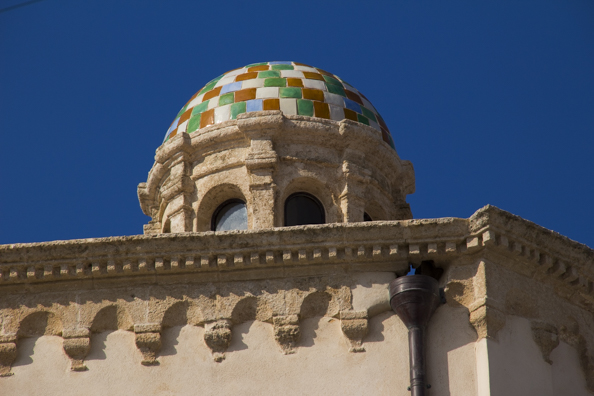 I left the old town through the Porta Vecchio and walked along the road to Piazza G Garibaldi. I bought an ice-cream from the gelateria in the square (something else for which this town is renowned) and sat for a while in the shade of an olive tree – wondering what to do next. 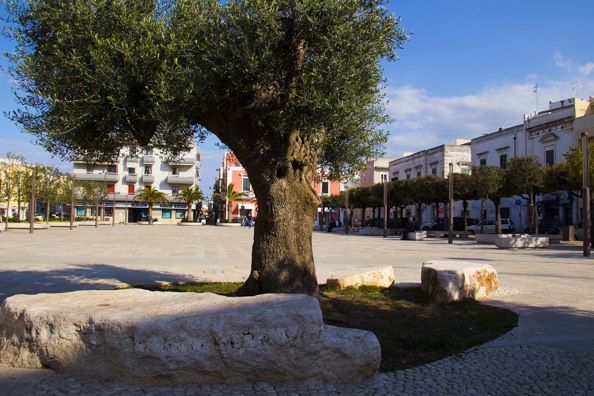 Not far from Polignano a Mare are the Grotte di Castellana (Caves of Castellana) which do merit a visit. Guides take visitors down into the caves sixty metres below the ground and follow the paths that wind through a stunning landscape formed by stalactites, stalagmites, fossils, canyons and caves. Visitors are encouraged to use their imagine to recognise animals and people amongst the gnarled rocks some of which are floodlight to enhance the wonder of this place. 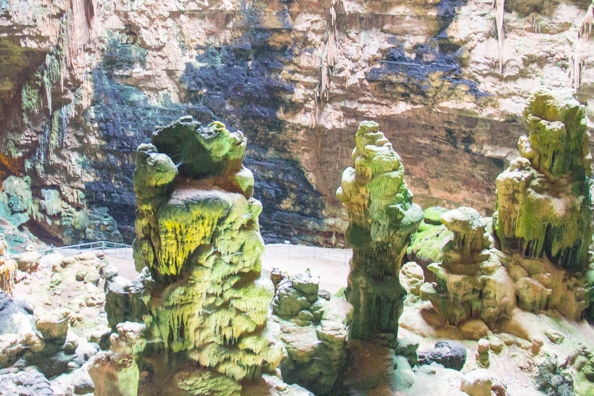 This article is now featured on GPSmyCity.  To download this article for offline reading or travel directions to the attractions highlighted in this article, go to Walking Tours in Polignano a Mare on GPSmyCity