Some Highlights of Bari in Puglia - From Fish to Fortifications

Bari may be a large commercial port and the capital of Puglia in Southern Italy but I had no sense of this when I arrived there. I was immediately drawn towards its attractive sea front which I made my starting point.

The Lungomare Nazario Sauro, a magnificent seafront terrace runs along the old harbour, the Porto Vecchio. This terrace is dominated by a majestic pink building built on pillars grounded in the sea that stretches out beyond the promenade into the water. As I passed by a car screeched to a halt beside me and a young girl leapt out and scurried into the building clutching a violin to her chest. I guessed this building must have cultural connections. I was right. Teatro Margherita was built in the cove of the old port between 1912 and1914. Designed in the Liberty Style and built using a mixture of metal and cement it was the first of its kind in Bari. The building was closed in 1980 probably due to the cost of maintaining it. It was renovated in 2009 and since it re-opened it has become the most important centre for contemporary arts in Bari. 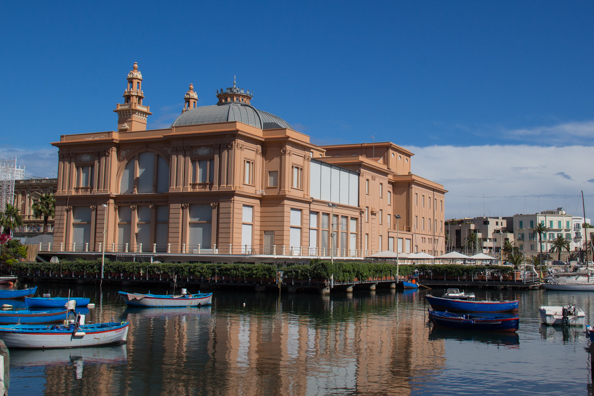 Just beyond Teatro Margherita and in front of Bari Yacht Club is the fish market. As I approached I could hear slapping and slurping noises. It was the fishermen either slapping the freshly caught octopuses on the wall or shaking them around in buckets of soapy water to soften them ready to eat. I strolled past stalls piled high with mussels and stopped to admire bowls of cuttlefish. 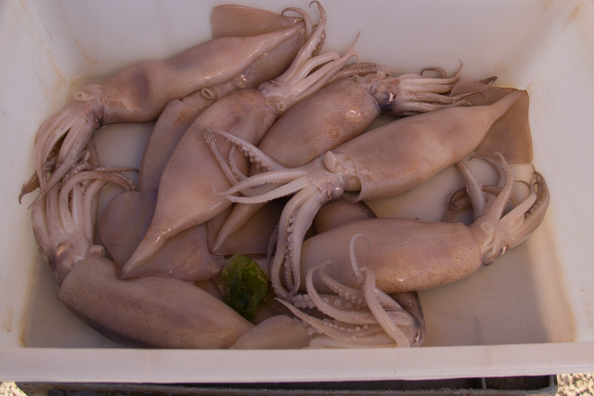 The Architecture of Bari

After strolling up and down the stalls in the fish market I crossed the road and walked down Corso Cavour. I am not an expert on architecture but it soon became evident that Bari has an interesting mixture of styles. At the top of Corso Cavour I walked past the impressive eighteenth century palazzo housing the chamber of commerce. Next to that is the Palazzo della Banca d’Italia (1932). Blocks of flats occupy Romanesque buildings ion the same road. At the far end is the Teatro Petruzzelli This theatre initially belonged to the Messeni Nemagna family but it is now the most important theatre in Bari, the fourth biggest theatre in Itlay and the largest private theatre in Europe. The theatre was built for the Messeni Nemagna by the Petruzzelli brothers at the end of the nineteenth century. The family financed the whole project. In 1954 it was declared an Artistic and Historic Monument and then, in 1967, it was named the Theatre of Tradition. Sadly, it was burned down in 1991 but was rebuilt and re-opened in 1991. While this theatre was out of action the Niccolò Piccinni Theatre was used as its replacement. This is the oldest theatre in Bari. It was completed and inaugurated in 1854 and named after Niccolò Piccinni, the famous composer from Bari, in 1855. 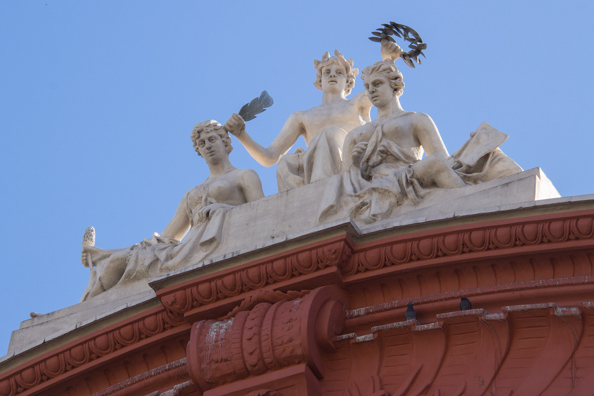 Of all the buildings I saw my favourite was the Palazzo Mincuzzi. This beautiful art nouveau palazzo houses the oldest department store in Bari. we walked to the junction with the main shopping street on the corner of which is the oldest department store, Mincuzzi, a beautiful old palazzo. The store opened in 1928 soon becoming one of the most prestigious shops in Bari. In 2001 the Mincuzzi family rented the property to Luciano Benetton. Fears that this would be the end of this iconic building have so far remained unfounded and the exterior of the building remains true to its origins. 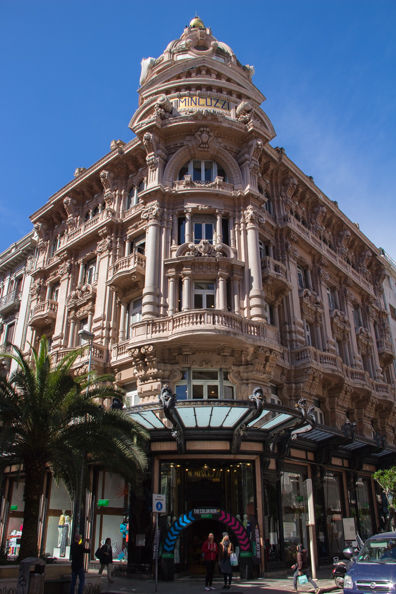 As a complete contrast as I continued on my way I skirted round the old town I paused to admire its oldest shop – a hardware shop. 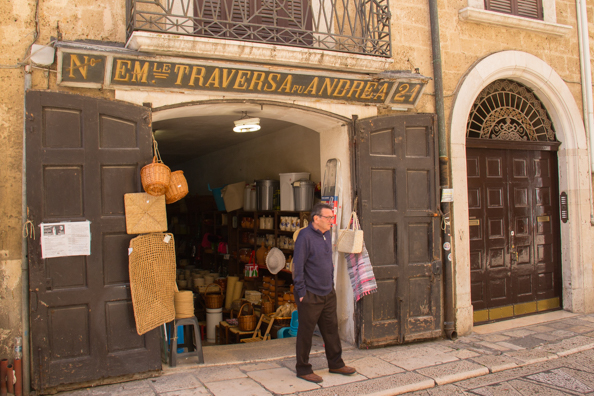 Piazza del Ferrarese is the centre of celebrations when the city honours its patron saint, Saint Nicholas. It was still dressed for the party while I was there but the festivities had ended the week before. The town celebrates its patron saint in May and December every year. This square is inside one of the gates of the medieval city, Porta di Mare which was opened in 1612 to allow the passage of goods through to the Piazza Mercantile . Piazza del Ferrarese takes its name from a dealer from Ferrara, a blacksmith, who settled in Bari in the seventeenth century and financed some important buildings in the square. This square is also very important archaeologically due to the discovery of a stretch of the Via Appia-Traiana, built by the Romans in the early II century AD. 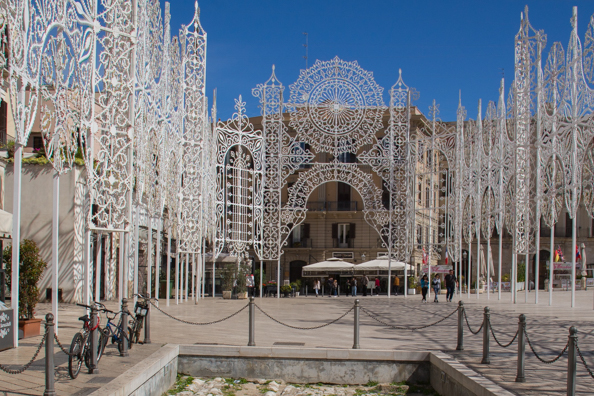 Coffee and Cakes at Martinucci

It was time to indulge in a coffee and cake break and sustenance was close at hand in Piazza Mercantile, home of Martinucci’s. I lingered over the mouth-watering display of cakes and pastries and the tempting contents of the ice-cream cabinet. All so reasonably priced I could have tried most of them without breaking the bank. Finally, I settle for a traditional pastry – an almond flavoured pasticciotto, a traditional Puglian pastry. It was delicious. 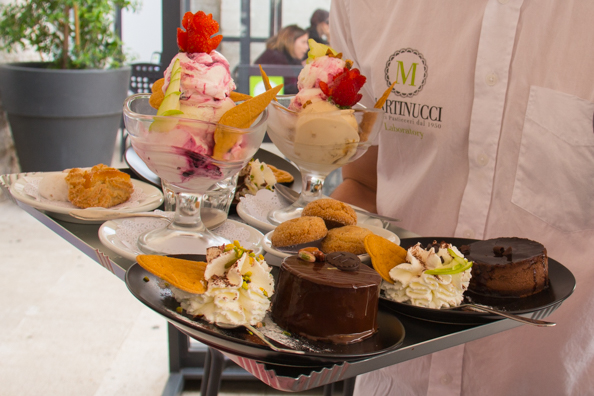 The Old Town of Bari

The old town of Bari or Bari Vecchio is a district of two halves – touristy and traditional. I concentrated on the traditional – an area of narrow twisting streets where houses have been passed down to generations of the same family. The front doors are never locked and the inhabitants sit outside in the street exchanging news and views. They also practice the very traditional skill of making orecchiette by hand. While I was examining the mounds of freshly made pasta I was introduced to one of the experts. The woman who taught Gino d’Acampo to make orecchiette properly. 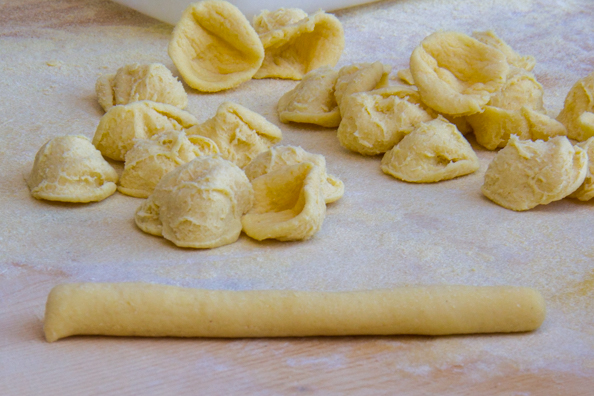 The Basilica of Saint Nicholas

Walking back towards the sea I arrived at the Basilica of Saint Nicholas. There was a wedding taking place inside the church but visitors were still allowed to go in. I crept inside and watched from the back as ceremony concluded and the bridal party progressed outside followed by the congregation. My progress towards the altar was impeded by the placement of barriers around it. Another visitor informed me that a second wedding was about to take place. All the decorations from the first wedding had to be removed (including the red carpet) and a completely new set had to be in place within a few minutes including different chair covers and new flower arrangements – all according to the bride’s choices and her budget. It was in impressive display of organised chaos so I retreated to the crypt below. The crypt is a place of worship for Orthodox Christians and also the resting place of the relics of Saint Nicholas. Saint Nicholas was the bishop of Myra in Ancient Greece and when he died his tomb became a popular place of pilgrimage. As Myra was a port sailors carried stories of this saint far and wide. Any town that attracts pilgrims enjoys commercial benefits so when Myra came under the control of the Seljuks who were not sympathetic to Christians some Italian merchants from Bari managed to steal the body of Saint Nicholas and bring it back to Bari. They had vowed, on returning to Bari, to build a magnificent church in honour of the saint. The resulting basilica, completed in the middle of the twelfth century, is a fine example of Romanesque architecture. As many faithful pilgrims journeyed to Bari to honour Saint Nicholas he became known as Saint Nicholas of Bari. 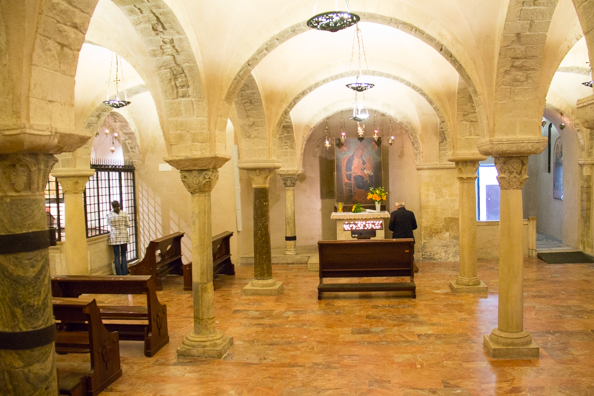 As Bari is the seat of an Archbishopric it also has a cathedral, Catedrale di San Sabino. It was built in the thirteenth century it is similar in structure to the Basilica but it does have one unusual feature. A large rose window is set into its facade and when the sun shines through this window at a certain time of day it is exactly reflected in a circular mosaic on the floor inside. 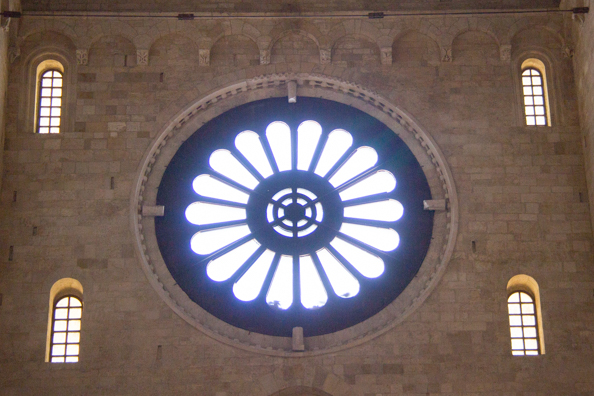 The cathedral also has a seventeenth century crypt supported by stunning marble columns and home to the relics of San Sabino. 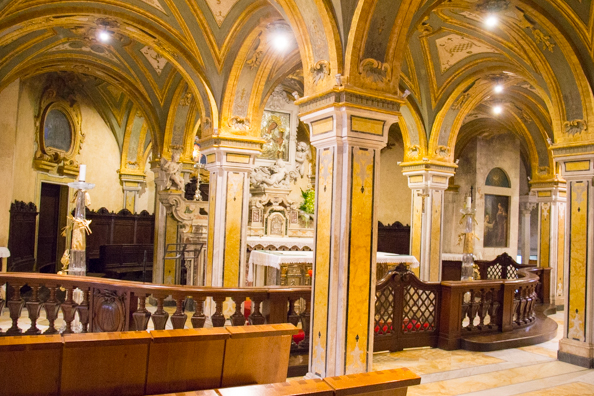 Emerging once more on the sea front I was faced by the Castello Svevo. This castle was originally constructed in 1131 on the remains of Byzantine dwellings and an eleventh century religious complex. After being badly damaged it was renovated between 1233 to 1240 by Frederick II. During the sixteenth century, Isabella of Aragon made adaptations to transform the castle into a royal residence during a brief and unhappy period of Aragonese rule in Bari. Now it is a cultural centre housing exhibitions. 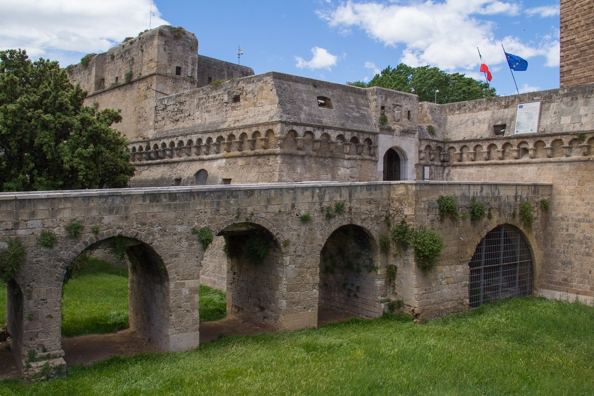 Bari was a revelation and so much more than I had expected. I would be back – there were some beaches to explore at the other end of its seafront.