A Walk around Trani in Puglia – A Joyful Experience

I felt light-hearted as soon as I got out of the minibus in Piazza Mazzini in Trani, a coastal town in the Italian region of Puglia. The sun was shining and little white clouds scudded past the vacant windows of the gleaming white facade of the Church of San Luigi. Built in 1753 this pretty church was restored in 2004 and opened to the public as a cultural centre hosting conferences and small exhibitions. Close to this piazza on the sea front is the splendid Cathedral of Trani dedicated to Saint Nicholas of Pellegrino also known as Saint Nicholas the Pilgrim. According to legend Saint Nicolas originally came from the Greek monastery of San Luca in Focide. He had travelled through Greece and Dalmatia when he landed in Trani. He was so exhausted that he died aged only eighteen. After his death several miracles occurred and for this reason the archbishop of Byzantium proclaimed him to be a saint. It was then decided a church should be built in his honour on the ruins of the Church of Santa Maria della Scala. This impressive Romanesque Church dominates the seashore of Trani. It was built using the local tufa stone which develops a rosy glow at dawn and sunset. 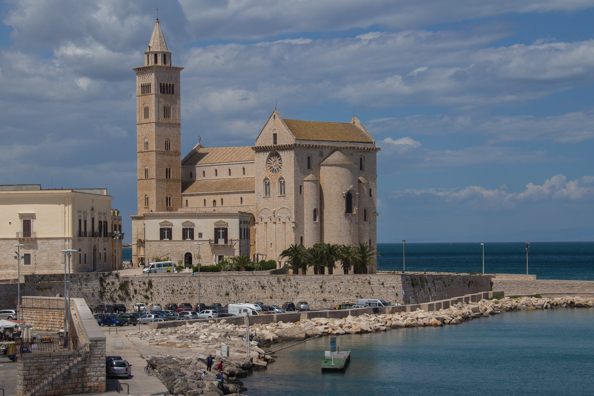 A wedding was about to take place when we arrived there but it was still open to the public – an irritation to the official photographer who had competition from snap-happy tourists. And no wonder as the groom and his escorts were members of the Corazzieri. This company of mounted soldiers has existed since the fifteenth century when they were the protectors of the House of Savoy. Over the centuries they evolved into the carabinieri, the Italian military police. In 1992 the old name Reggimento Corazzieri was officially restored to the guards of the President of the Republic of Italy. Members of this body have to be at least 1.9 metres tall (6 feet 2.8 inches). The decorations inside the church were a glorious mixture of stark white blooms on a background of scarlet drapes. It was an impressive display and also an opportunity for an interesting lesson in Italian history. 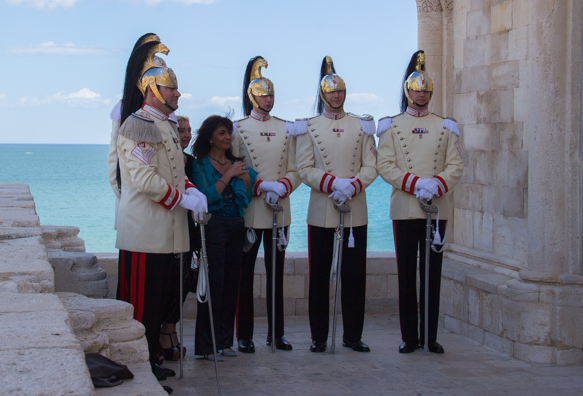 There are three levels to the cathedral and the music from the wedding ceremony followed us down the steps into the original church. After exploring the colonnaded interior of the main church we descended the stairs to the original church. It is very atmospheric peering down tunnels of brick columns to view the remains of Byzantine frescoes. Below this church is a another chamber which is thought to date back to the sixth century. The main crypt contains the remains of Saint Nicholas. 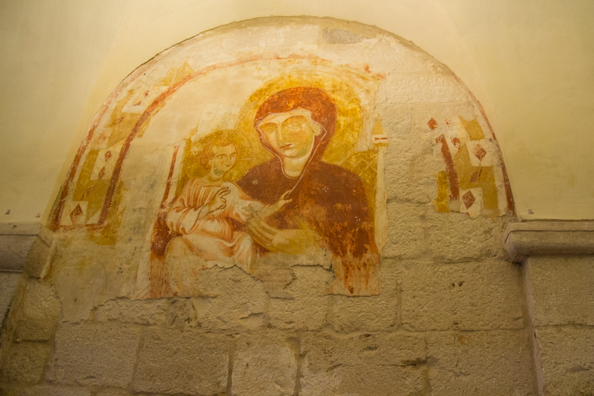 Just beyond the cathedral, also on the shore, is a Swabian Castle built by the Holy Roman Emperor Frederick 11. Frederick was responsible for the construction of several defensive fortresses along the Puglian coastline but this is probably the most beautiful. It reflects the shape of the Adriatic Sea and was completed in the mid-thirteenth century. Ten years after its completion Manfred, Frederick’s son, and Elena Comneno, the daughter of Michael II King of Epirus, were marriedthere. Since the castle was built it has undergone considerable alterations to cope with changing times including the introduction of firearms. It has also been used for several different purposes most notably a judicial administrative centre and a prison. In 1998 it was opened to the public as a centre for events and exhibitions. 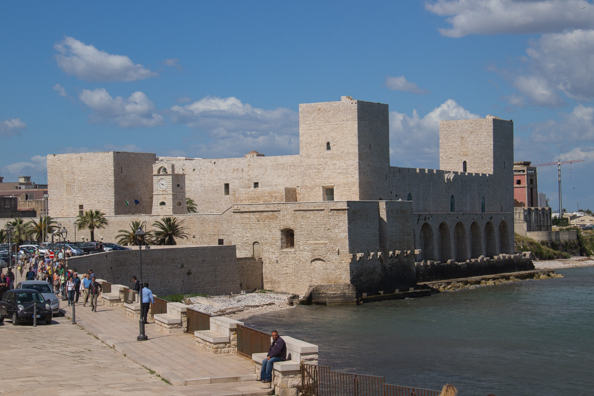 As we strolled around the harbour we paused to admire the Chiesa di Ognissanti, a twelfth-century church built by the Knights Templar . Trani was on the route used by crusaders going to and from the Holy Land. There was also a hospital on the site to look after the sick and wounded. 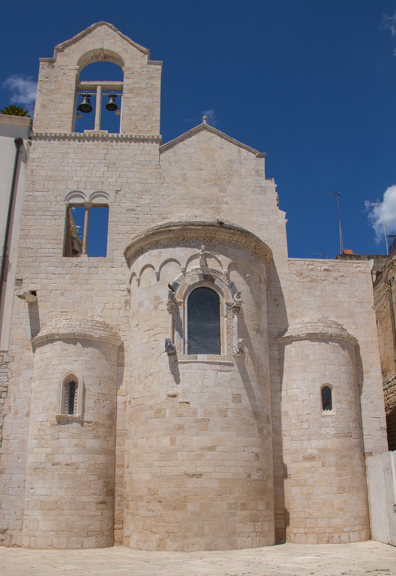 As we strolled along the harbour we paused to watch the fishermen mending their nets and tending their boats. Buckets were spread on the pavement containing fish as some were still selling the morning’s catch to passers-by. 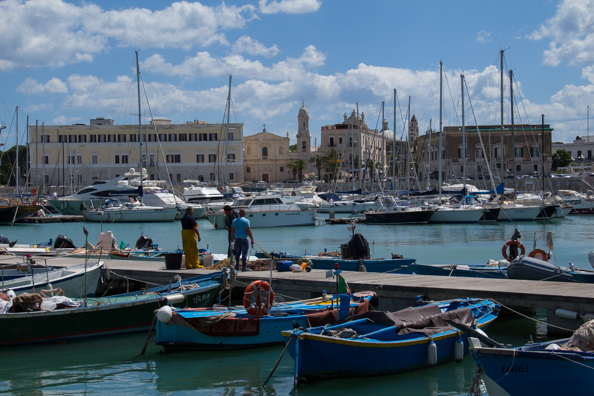 After admiring the yachts in the marina we crossed Piazza Plebiscito and turned into the public gardens, the Villa Comunale that stretch along the sea shore and culminate in a view point over the harbour. These gardens are very popular with the locals and have changed very little since they were established in 1842. The pool around the fountain is home to a large number of terrapins – all basking in the sun. 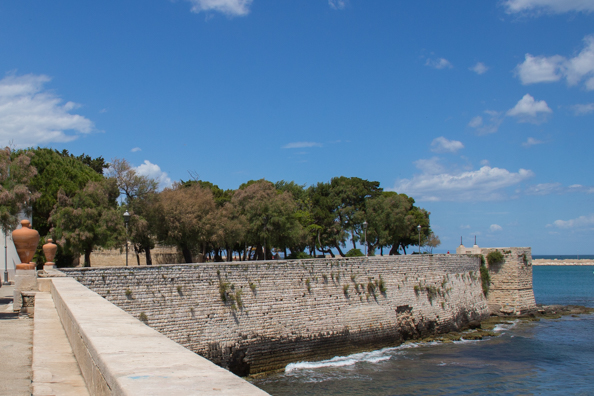 Across the water we could see the umbrellas on parade outside the string of fish restaurants lining the harbour. A reminder that it was time for lunch. We were soon sampling the fresh fish baked in salt. 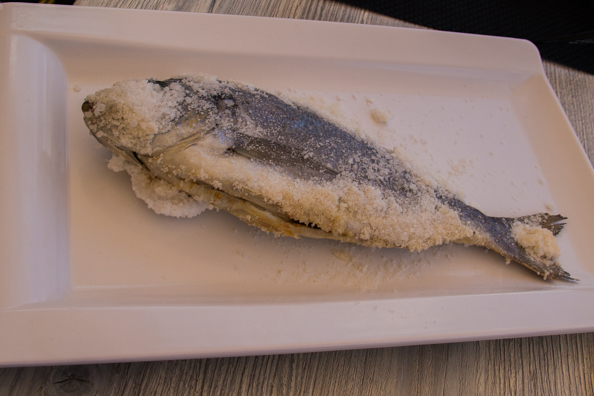 After lunch there was no time to linger before we set off to visit another castle built by Frederick II – the extraordinary octagonal Castello del Monte. Perched on top of a hill not far from Trani and visible for miles around its unique military architecture has attracted UNESCO recognition. It was a lovely way to end our visit to Trani. 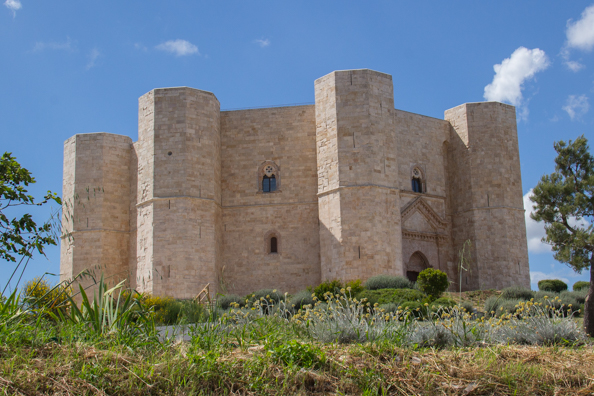