Otranto in Puglia - A Surprise Package

Like many towns in Puglia, Otranto, a pretty coastal town, has a mixed and colourful past. It was established as an important port by the Greeks which was later used by the Romans. It has been ruled by the Byzantines, the Normans and the Aragonese. All of whom have left their mark on this little town whose white buildings contrast starkly with the azure blue of the surrounding sea. As we strolled along the harbour of our attention was drawn to an old gun boat. Its rusty remains had been fashioned into a sculpture by the incorporation of stacks of glass panels. After a few minutes’ speculation regarding its significance we continued on our way to the old town. A few meters from the sculpture we found a series of information boards and the mystery was solved. This work of art is called L’Approdo and it is a memorial to a tragedy that occurred in 1997. At the time Albania was going through troubled times resulting in a large migration of Albanians across the sea to Italy. On 28 March around 120 Albanians boarded the Kateri i Radës and set off for Italy. But, to prevent the entry of illegal migrants into Italy the Italian Navy were effecting blockading their coast. They were boarding any Albanian vessels they came across. While the Italian ship Sibilia attempted to board the Kater i Radës they caused it to capsize and, it is believed 84 Albanians aged between 3 months and 69 years drowned in the Strait of Otranto. Thirteen years later the remains of the Kateri i Radës were used by the Greek sculptor Costas Varotsos www.costasvarotsos.gr/cv05a-en.html to create a memorial to those who lost their lives. History really does repeat itself. 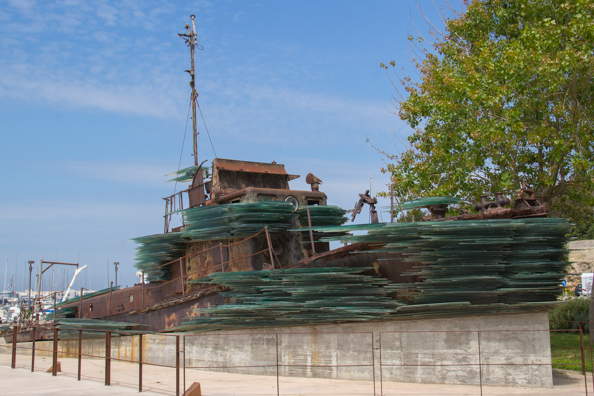 Our route from the harbour to the old town took us past Otranto Castle also known as Castello Aragonese. This huge castle is laid out on a pentagonal plan and has three round towers and bulwarks facing the sea. It was built by Ferdinand of Aragon on the site of fortifications established earlier by Frederik 11. It is open to the public and the rooms around its main courtyard are perfect for exhibitions and conferences. Later that day I went back and explored the inside of the castle. The rooms were being empties after the last exhibition and the path to the ramparts was closed off. But I was not going to let a flimsy barrier prevent me from getting an overall view of the town and its sea front. 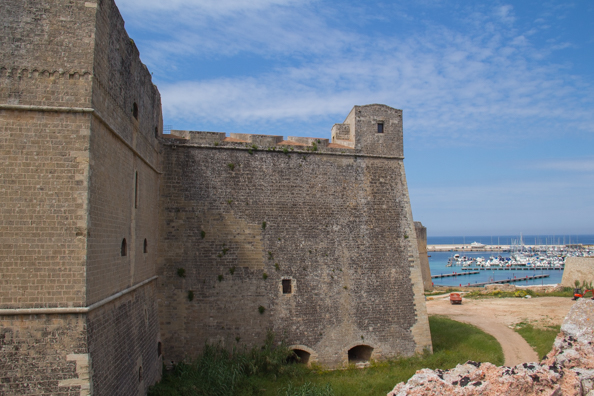 Strolling around the castle which still appeared to be in good shape I spotted a ruined section of the outer walls of the castle. I was attracted to it by the sunlight steaming through the vacant windows. Two tombs were set into this wall. On closer inspection I discovered that one of them was the tomb of Donna Teresa De Azevedo, who died on February 23, 1707. Her husband Don Francesco de la Serna and Molina, the warden at the time, was responsible for the lovely epitaph that describes her as an example of modesty, beauty goddess, a model of honesty, offspring of Spanish heroes. 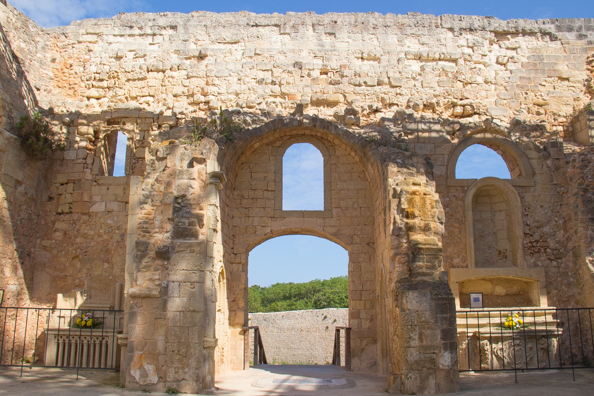 The original castle was ransacked by the Turks when they invaded the town in 1480. A fleet of Turkish warships besieged Otranto. They intended to subdue Italy and France and then form an alliance with the Muslims who ruled Spain. However, the strong resistance of the locals took them by surprise and it was fifteen days before they managed to breach the city walls. When the Christians refused to deny their faith the Turks broke into the Cathedral and murdered the Bishop and all the citizens who had taken refuge there. Hundreds of the inhabitants were then taken to Minerva Hill near the town where they were beheaded for refusing to deny their faith. Subsequently the church declared them to be martyrs and their bones are displayed in seven tall cabinets inside the cathedral. It was a gruesome but compelling experience walking past these cabinets. These cabinets are tucked away in the corner of the church. Every July the castle is besieged – by an audience of jazz lovers to enjoy a week-long summer jazz festival – a non-profit making event. It is held in the open air by candle light creating a fantastic atmosphere. 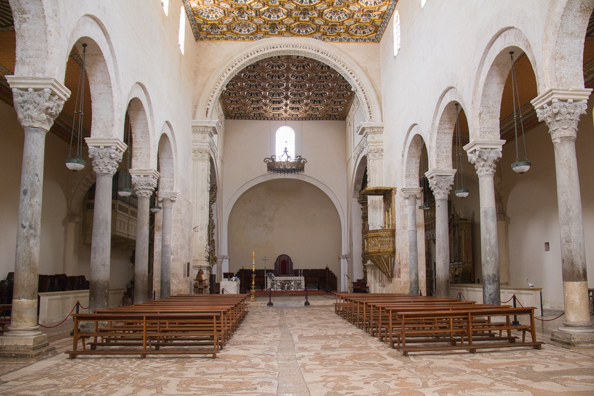 This cathedral, Romanesque in style, was completed during the twelfth century. It has a lovely rose window above the Baroque portal. Inside the whole floor is inlaid with a large mosaic of the same era representing the tree of life. A monk called Pantaleone created this whimsical work that features fantastic creatures both real and mythical, signs of the zodiac and religious stories. 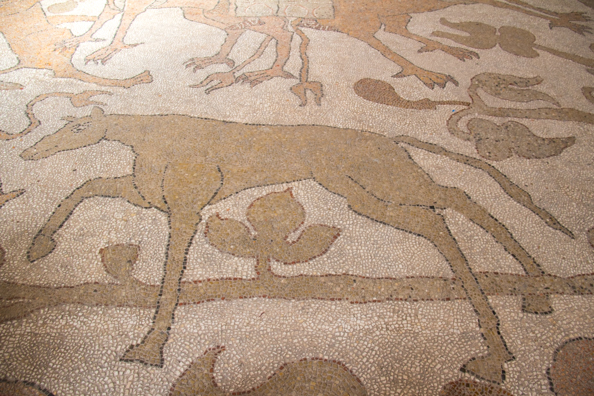 The wide promenade along the sea front is known as the promenade of the heroes. We strolled along it under the watchful eye of a statue perched on a column. This statue, built by the sculptor Antonio Banda in 1922, represents the allegorical figure of the Motherland defending herself from danger approaching from the sea. Every year, on August 13, a commemoration ceremony takes place in honour of the martyrs when local dignitaries lay wreaths at the foot of the monument. 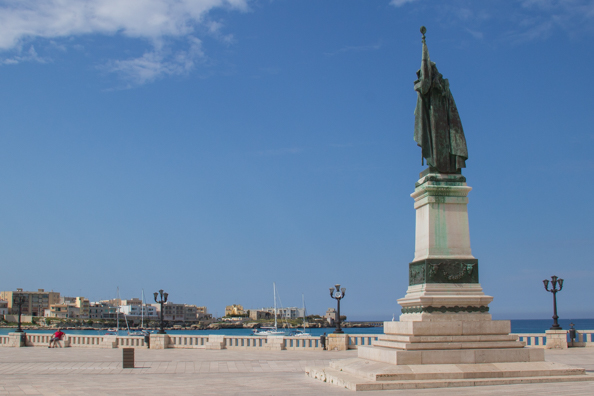 The town was having its siesta when we arrived but now its residents were emerging from their houses and promenading along the front or strolling through the narrow streets lined with curiosity shops. We found our way to the popular Piazza del Popolo, bought an ice-cream from the Gelateria with the longest queue and then sat on a bench in the sun watching the world wander by. 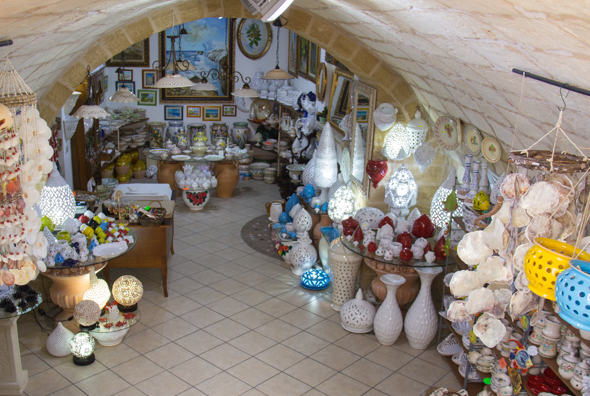