It was a splendid English afternoon tea. Miniature smoked salmon blinis, tiny quiches and bite-sized sandwiches graced the bottom plate of our three-tier cake stand. Plump scones, pots of jam, a small dish of fresh cream and fluffy Bakewell slices crowded together on the second tier. And on top, a halo of chocolate delicacies. Once we had made our choice of beverage from a wide variety of teas and tisanes we were free to tuck in and drink in our elegant surroundings – the Orangery Restaurant at Blenheim Palace 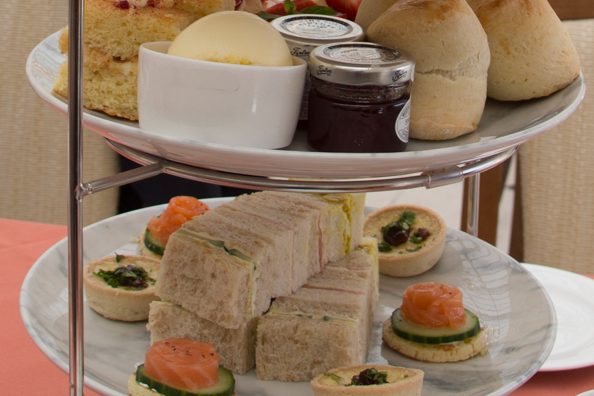 An Orangery is, as its name suggests, a large greenhouse used to grow orange trees. They date back to the seventeenth century Britain when wealthy landowners used them to house orange and other citrus trees during the winter to protect them from the cold weather. Initially they did not feature much glass but glazed roofs were introduced during the nineteenth century to allow as much sunlight as possible into the building. Orangeries were a sign of wealth and even more so if they had a glass roof. However, these grand structures proved to be too cold for the trees they were supposed to be protecting but they the do make elegant restaurants. At Blenheim Palace the newly opened restaurant is operated and run by Searcys. Visitors can choose from a variety of full service meals, elevenses, lunch or afternoon tea. There is also an Express Menu for those who do not wish to linger over their food. 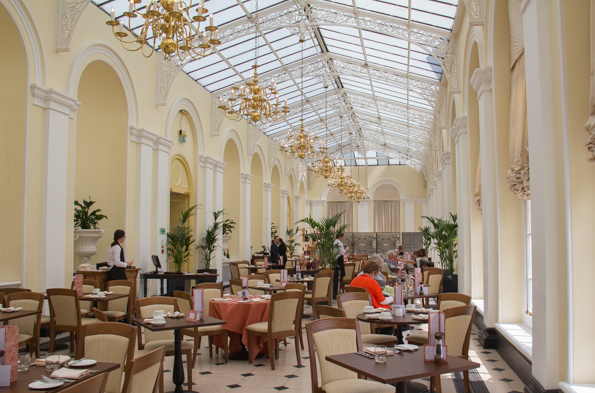 We had started our day with a tour of the state rooms in the palace. This is one of several tours available included in the entrance fee. It was a good way of getting a flavour of the palace and learning some of the history. Well-placed information boards in each room help visitors to find their own way round these rooms but I prefer having a guide as you can ask them questions. They may also tell you anecdotes that bring the place to life and make your visit more memorable. Our tour started in the grand entrance hall where we learned that the First Duke of Marlborough had been rewarded through the gift of the Royal Manor and Park of Woodstock by Queen Anne following his success at the Battle of Blenheim in 1704. He turned this ramshackle place into the magnificent palace and grounds that we know today. 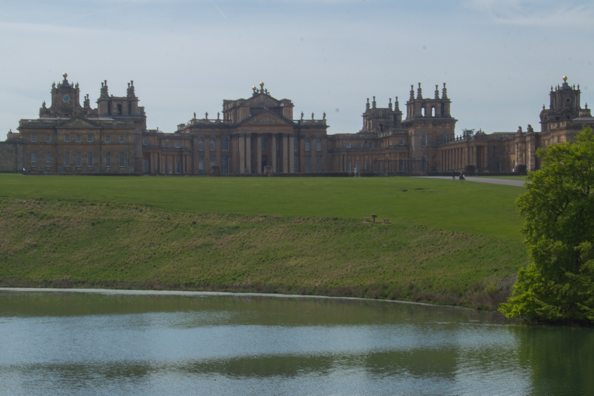 On our tour of the State Rooms we spent some time in the Second State Room admiring the tapestries that show the first Duke of Marlborough’s final victorious campaign at the Siege of Bouchain. This siege took place during the Spanish War of Succession. Sir Winston Churchill once said that the first Duke of Marlborough’s manoeuvres here showed his military genius here far more than any other battle which is probably why these tapestries were made to commemorate the event. 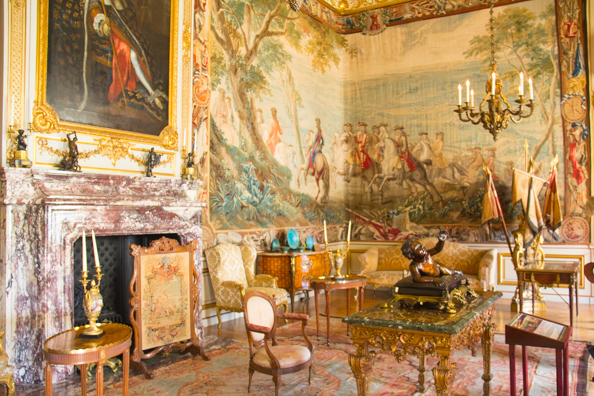 Churchill was well placed to make such a comment having been born at the palace in 1874 (an unplanned event) and also being a Marlborough himself. He proposed to his wife, Clementine Hozier in 1908 in the Temple of Diana in the palace gardens while they were sheltering from the rain. He is quoted as having said, “At Blenheim I took two very important decisions: to be born and to marry. I am content with the decision I took on both occasions.” After making our way past the formal gardens on the water terraces behind the palace we stopped at the temple of Diana which is the start of the Winston Churchill Memorial Garden. This lovely garden features a bust of Churchill and a path incorporating paving stones inscribed with significant dates during his lifetime. 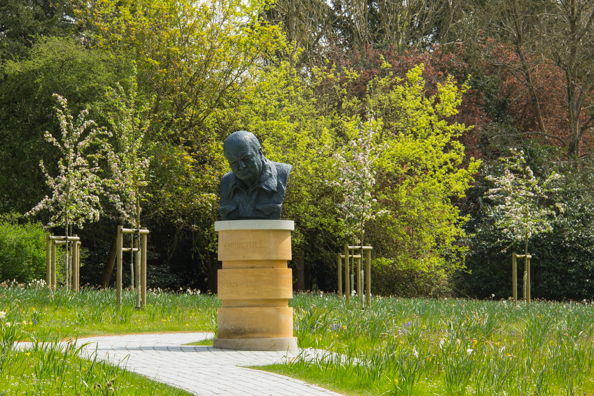 After peeking over the topiary hedge at the beautiful Italian garden that fronts the private apartments where the Marlborough family still live I made my way through the park to the Secret Garden. Not so secret as it was well signposted and I was surprised to find it was empty. It is a pretty, tranquil place. 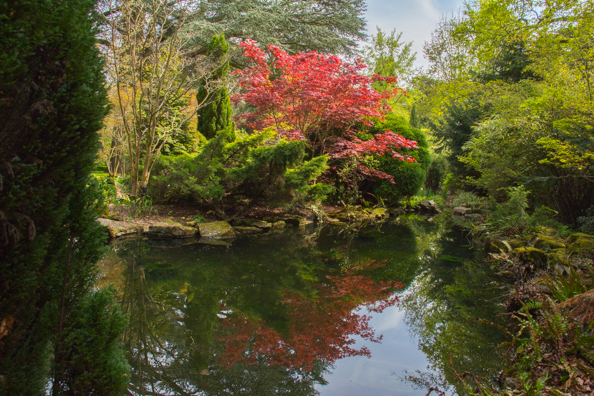 My next objective was the Pleasure Gardens at the far end of the park. As it was a lovely day I decided to walk there. I could have taken the miniature train (for a small fee) – a popular attraction for families with young children. But I was happy to stroll along with just the pheasants pecking in the grass as company. It was very busy at the Pleasure Gardens and the air rang with shrieks of children playing in the adventure playground or getting lost in the hedge maze. The latter is one of the largest of its kind in the world. I turned my attention to the Butterfly House, behind the lavender garden. It had a lovely time watching the butterflies flitting amongst the stunning exotic blooms. An added attraction was a family of cheeky Zebra finches pottering around the plants. 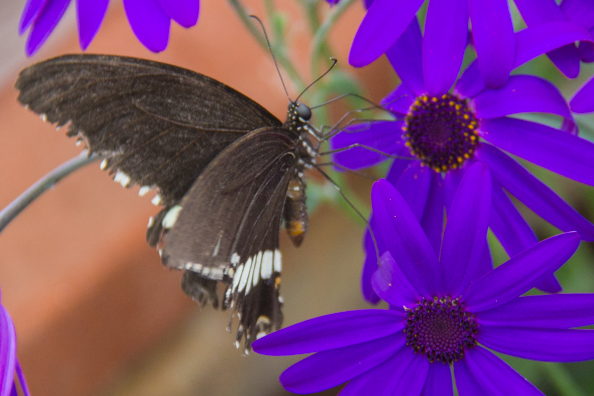 When I checked the large map in front of the palace I realised there was still plenty to explore but I was not sure how long it would take me to walk around the lake. A very helpful man in the Information Kiosk assured me I had plenty of time to walk there and back and told me how to get out in the event of the palace gates being locked when I came back. How did he know I was likely to get side-tracked and this was a distinct possibility? I set off along the lakeside path. As it was late afternoon there were very people around and it was not long before I reached my objective – the Grand Cascades. 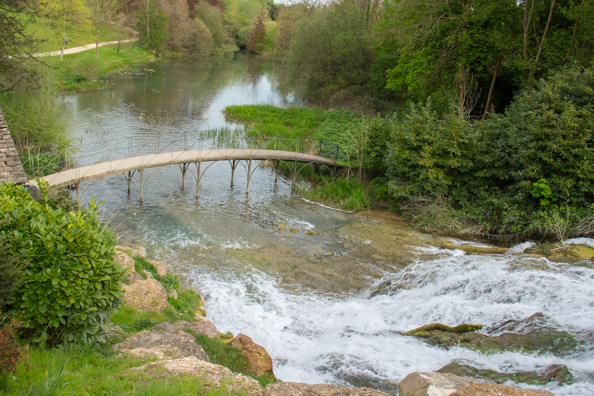 This picturesque waterfall was one of the triumphs of Capability Brown when he was employed to landscape the parkland around the palace in 1763. He used the River Glyme to form the lake in the grounds. This year Blenheim is celebrating three hundred years since the birth of this genius who transformed the art of landscaping during the eighteenth century I did not have enough time to follow all the suggested walks to fully appreciate his work in this park. But I did have time to walk down to the Grand Bridge, the brain child of Sir John Vanbrugh who designed and built Blenheim Palace during the first half of the eighteenth century. He built this bridge to traverse the River Glyme that threaded its way through the marshy grounds of the palace until it was transformed into a lake by Capability Brown. Standing on the bridge I had a good view of the palace in front of me. Behind me, in the distance I could see the Column of Victory (1730) crowned by a statue of the first Duke of Marlborough dressed as a Roman general. He not only triumphed in battle but also in the creation of this stately home masterpiece. 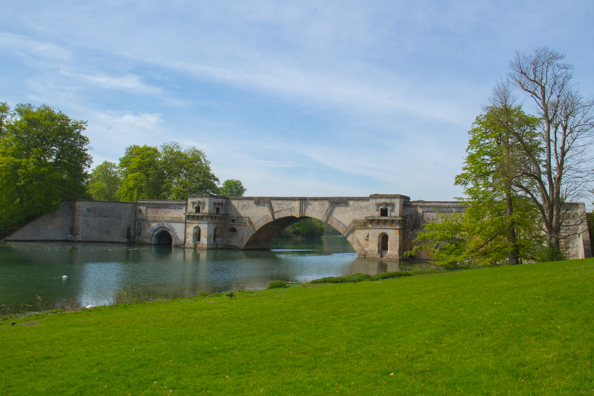