My Cuban Cocktail - A Mixture of Memories of Cuba

When I knew I was off to Cuba the first item that went into my suitcase was my swimming costume. Swimming with dolphins was on the itinerary and I was determined to take part. Like most people my ambition had been to to swim with dolphins in the wild. I had tried. But when I hurled myself off the boat I landed on top of a very large jelly fish and had to be hauled back on board. My face was red for a long time afterwards – not embarrassment but a very painful sting. I could be sure that the natural sea lagoons of the dolphinarium at Cienfuegos would only contain dolphins. It was a wonderful experience. Dolphins are such gentle creatures it is a privilege to inter-act with them. They kissed out cheeks, danced with us and rolled over to have their tummies tickled. Finally, they lifted us high out of the water on their noses before tossing us into the water. The dolphins seemed to enjoy our time together as much as we did. This was part of the joy of being there. 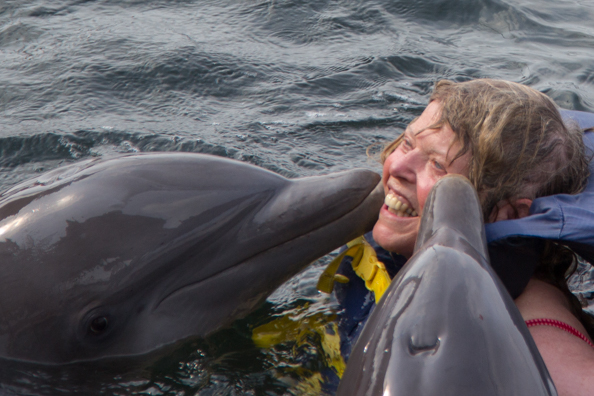 We all have heroes, mostly for their good looks, and after seeing the film Che mine was the revolutionary Ernesto “Che” Guevara de la Serna. He was born into a middle-class Argentinian family in 1928. But, while studying to be a doctor he took a trip through South America that changed his life. The terrible living conditions he encountered resulted in a resolve to provide care for the needy and then a conviction that only revolution could bring justice to the people of South America. By the time he met the Cuban revolutionaries Fidel and Raúl Castro in 1956 he was married and living in Mexico. Guevara was a key player in the Cuban revolution and the new regime. But ten years later he moved on, to spread his ideologies in other South American countries. But his crusade got no further than Bolivia where he was captured and executed. He is still revered by the Cubans and his forever young face is everywhere. It graces walls, buildings, T-shirts, fridge magnets – anywhere a face can be painted there his will be. 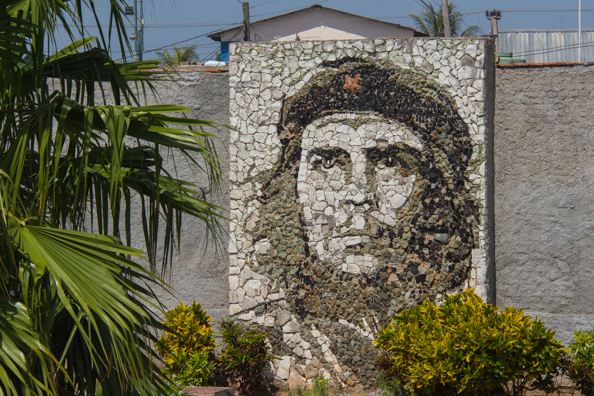 I love to see old cars so Cuba was a car fest for me. But are Cuba’s classic American cars about to disappear following changes in the law relating to new vehicle imports? It is hard to imagine Cuba without the pre-1959 Pontiacs, Studebakers, Oldsmobiles and Chevrolets that have rolled through its streets for over fifty years, patched up with an assortment of spare parts. This vehicle time-lock was the result of an embargo imposed by Fidel Castro on new American Cars and parts from the United States. Tourism will be the saviour of these iconic vehicles and their numbers seem to be increasing rather than decreasing as decaying bodies are rescued from old sheds, spruced up and brought to life with new engines beneath their bonnets – ready for the expected influx of American tourists as the United States and Cuba move towards a lifting of the embargo . 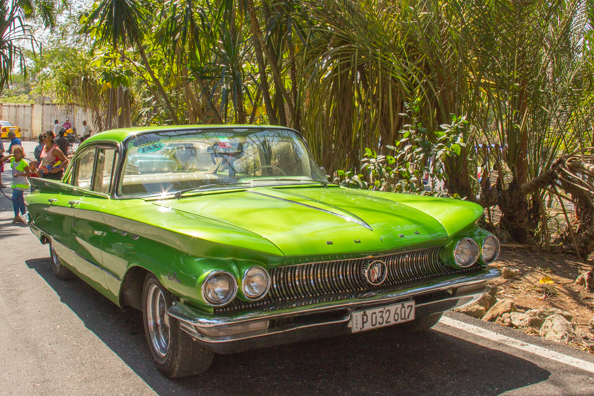 Music everywhere – on the streets and in the bars

I love to hear live music and in Cuba the streets and the bars are alive with the sound of music. When a small band started playing salsa music in the Plaza de la Cathedral it was not long before people were dancing on the cobbles. Those that did not dance clapped and cheered. It was a very happy atmosphere and one that I saw re-created many times during my stay in Cuba. And not just salsa music as Cuban music has its origins in West Africa brought to the island by slaves . Since then it has been influenced by many other cultures. 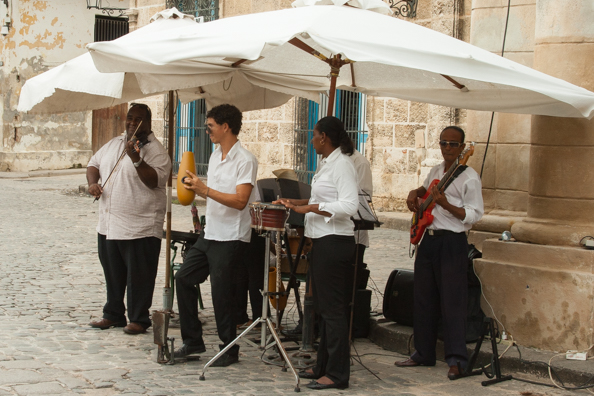 Ernest Hemingway is one of my favourite authors but until I went on the Hemingway tour in Havana I had not been aware of his close connection with Cuba. We started at the farm near Havana that he bought with his third wife, Martha. La Finca Vigia or Lookout Farm looks just as it did when Hemingway lived there. Due to injuries sustained in the First World War he was unable to sit for any length of time and would wander from room to room when he was writing. For this reason, he was unable to work in the room at the top of the lookout tower Martha had built for him but to appease her he would go up there at the end of the day to put his papers in order. His beloved boat, Pilar, is stored there. From the farm we made our way to Cojimar on the outskirts of Havana and visited the bar Hemingway used to frequent with his fishermen friends. In la Floridita we joined a flock of tourists – they are herded through regularly to drink one of their famous daiquiris and admire the bronze sculpture of Hemingway leaning on the bar. We tried to have a look inside his favourite restaurant La Terraza just down the road but as we either had to pay an entrance fee or buy a drink we continued down the road to the Hemingway Memorial. This very simple memorial by the sea was created by the local fishermen from boat propellers. It reflects the deep love Hemingway had for Cuba and the great respect of his friends there. It seems Hemingway was recalled to the United States due to his close friendship with Fidel Castro which may have been a contributory factor to his suicide a year later. Our tour ended at the Hotel Ambos Mundos where Hemingway stayed when he first visited Cuba. Room 511, the room he used has been preserved as a small museum. Before visiting the room, we took the old-fashioned cage lift to the roof-top restaurant for a light lunch overlooking the rooftops of Havana. 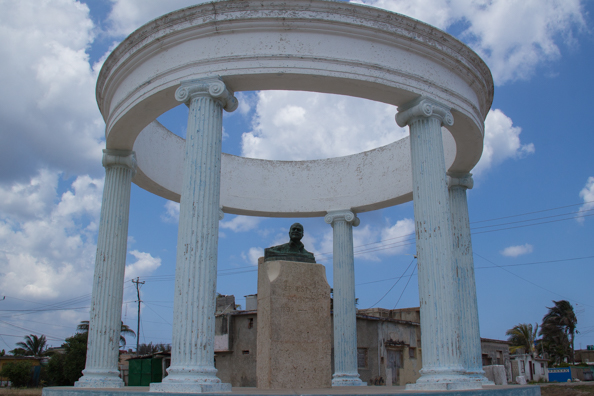 Our walking tour of Trinidad de Cuba began outside an abandoned church. A haunting sight and a reminder of the mixed fortunes of this once very affluent town. We walked through narrow streets lined with brightly painted one-storey houses to its main square, Plaza Mayor. The buildings surrounding the raised gardens in the centre of this square date from the eighteenth and nineteenth centuries. During that period trade in sugar from the nearby Valle de los Ingenios and the slave trade brought wealth to the area. The beneficiaries of this wealth owned these buildings. But when the sugar trade diminished and the slave trade ended the town became a backwater and many of its buildings were neglected until the 1950s when these historic buildings and streets were rescued and refurbished. Most of the buildings around the square are now museums. In the corner of the square is the old Convent of Saint Francis. Franciscan monks built it in 1813, it became a parish church in 1848 then, in 1895 it was converted into a garrison for Spanish troops but was later abandoned. In 1920 most of the complex was demolished and only the bell tower and a few other buildings were left. These buildings now house the National Museum for the Fight against Bandits. It is only a small museum but the real attraction is the opportunity to climb the bell tower for the views over the town and surrounding countryside. 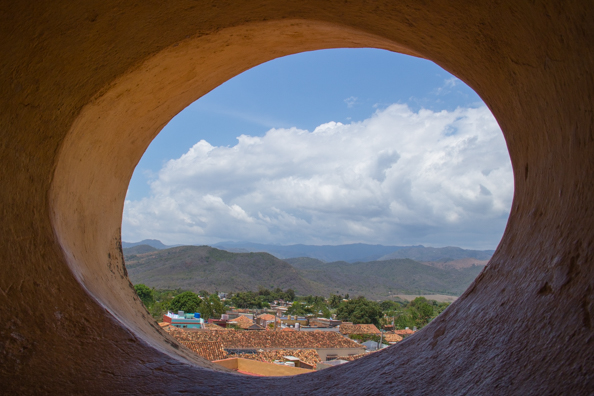 The success of our Hemingway tour and visit to Trinidad was largely due to our Cuban guide, Yazel. He works for Cubania Travel and accompanied us during our sightseeing week in Cuba. He was full of useful information about all the places we visited and on long journeys entertained us with anecdotes of the Cuba he knew while he was growing up. 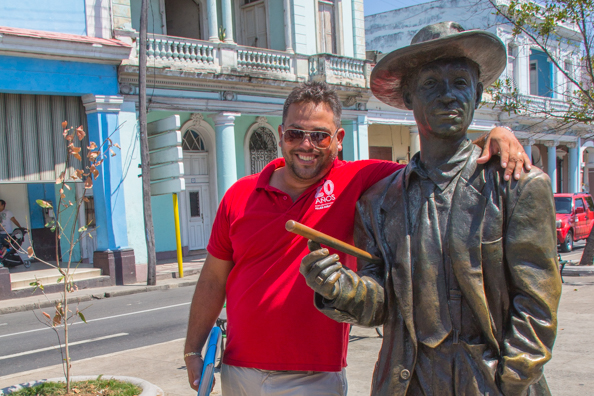 A Visit to the abandoned Hershey Factory

The second week of my trip was spent by the sea at Memories resort in Jibacoa. Lovely though this resort is after a few days I wanted to explore further afield and having heard that the abandoned Hershey Factory was nearby I organised an old American car to take me there. Milton Hershey famous for founding the Hershey Chocolate Corporation and making chocolate confectionary popular worldwide had a dream. During the First World War when an essential ingredient for his chocolate, sugar, was in short supply Hershey decided to buy sugar plantations in Cuba to mill and refine his own sugar. Not only did he complete a state of the art sugar mill in 1918 but he built a whole town around it. There were comfortable homes for rent, good health care, a free public school, recreational facilities including a golf course, a cinema and a general store. To transport building materials to Central Hershey and to market the sugar he built an all electric railway, completed in 1922, that runs between the major ports of Havana and Matanzas. This railway still runs today although the service is not very reliable. We stopped at the Hershey station hoping to see a scheduled train go through but it never appeared. We moved on to Hershey town, renamed Camilo Cienfuegos, but still known locally as Hershey. Hershey had no heirs when he died in 1946 and his Cuban holdings were sold to the Cuban Atlantic Sugar Company. Hershey subsequently became the property of Julio Lobo one of the island’s richest men. When Castro came to power in 1959 the sugar mill and the railway were nationalised. By then many changes had been made to cut costs but production continued using replacement parts from the Eastern bloc. But when the collapse of the Soviet Union in 1991 destroyed Cuba’s economy the mill became unproductive and finally closed in 2003. Although the huge mill has essentially been abandoned there was a lot of activity amongst its many buildings – scavengers no doubt. Vehicles lay abandoned where they were last used. But the bust of Hershey still stands erect and proud amongst the ruins of what might have been.

The amazing blue sea at Varadero

Varadero has risen from being used as a dry dock for Spanish sea-farers during the sixteenth century to become the largest tourist destination in Cuba. Throughout it has retained its original name, the Spanish for dry dock. Prior to the Cuban Revolution Varadero was a favourite resort for wealthy Cubans and rich and famous Americans. Forty years after the revolution its importance as a resort to the Cuban economy was recognised through the construction of good quality hotels and all-inclusive resorts to welcome visitors from all over the world (except America). Recently its marina has been enlarged and more hotels have been built to welcome back the Americans. When I arrived in the resort I went straight to the covered market at the far end of the long promenade, the quieter end. I spent a long time browsing the many stalls. I was looking for a leather hat but they were all the same size and all too big. A helpful stall holder said he only made one size as he could not sell smaller sizes! I crossed the road, followed a footpath through the trees and emerged on the beach. I was stunned – the deep blue of the sea, the azure hue of the sky just blew me away.

Enjoying a pina colada above Bacunayagua Bridge in Matanzas

The Bacunayagua Bridge in Matanzas may have achieved fame as the highest bridge in Cuba but for me it will always be remembered for an entirely different reason. The bar overlooking the bridge serves the best pina colada I have ever tasted. It is made with fresh pineapple and fresh coconut and served in a pineapple. You add your own rum to taste. Wonderful. Oh, the view was pretty impressive as well. 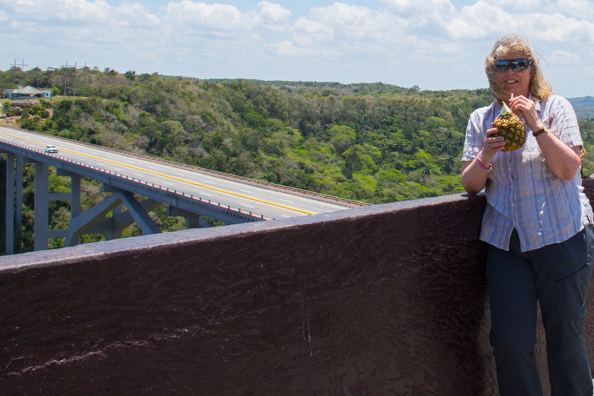