A Walk Around Matanzas Where I Found the Real Cuba

I spotted the beautiful mural on the side of a house as we drove through Matanzas. on our way to Memories resort at Jibacoa. This image remained in my head and drew me back to the town a few days later. I organised an old American car to take us there. I did not have a map as Matanzas is not a highlight in guides to Cuba so I asked for the main plaza and hoped I could find my way from there. My first stop was the oldest hotel in town, Hotel Velasco, to see if they had a map of the town. I was offered maps of Havana, Varadero, Trinidad and Cienfuegos all at a price – but they did not possess a map of their own town. Nor did they have a Tourist Information Office. Back in the main square, Plaza Libertad I informed my companions that we would have to make it up as we went along. We decided a coffee was in order to discuss our options and set off towards the sea. A narrow street took us into the next square where we found the Cathedral of San Carlos – under restoration after suffering from years of neglect. This, we soon discovered, was a theme here, restoration and demolition. 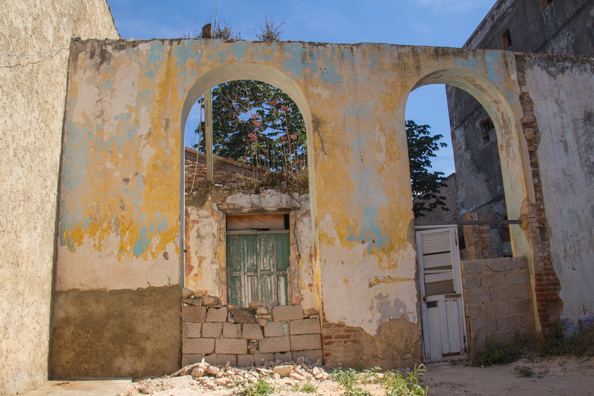 As we rounded the corner into Plaza de la Vigia we were met by a very lively scene. Crowds were milling around and performers in their costumes were waiting to do their acts on the paving stones in front of the bar La Vigia. As we had walked down the road a local had stopped to say hello and to tell us about the free entertainment in the square. When asked what they were celebrating he responded that he did not not know as they were always celebrating something. 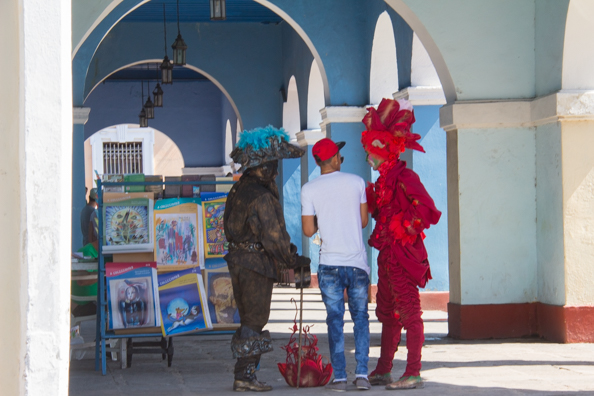 There was no room to sit outside the lovely blue colonnaded building that dominates the square so we made our way inside and sat down in the lovely old-fashioned bar. A waitress bustles over and took our order which she wrote down very carefully in her notebook. Three cappuccini and one expresso. She was back a few minutes later to inform us there was no coffee. We were definitely in Cuba. And not just Cuba but the Athens of Cuba according to the mural above the bar. 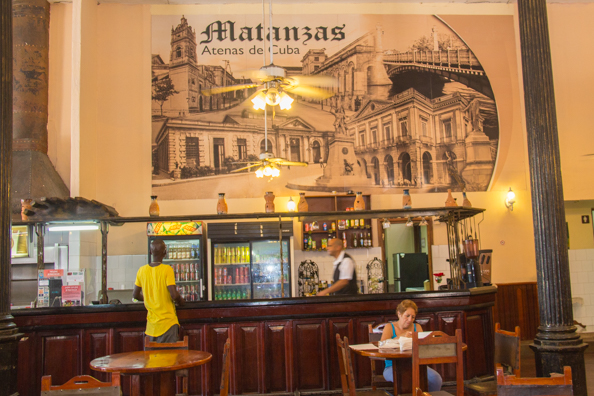 When we left the bar we crossed the Calixto García Bridge which took us over the San Juan River into the neighbourhood of Pueblo Nuevo. Matanzas is famous for its bridges and we could see several from where we stood – including the rotating bridge that has never rotated. 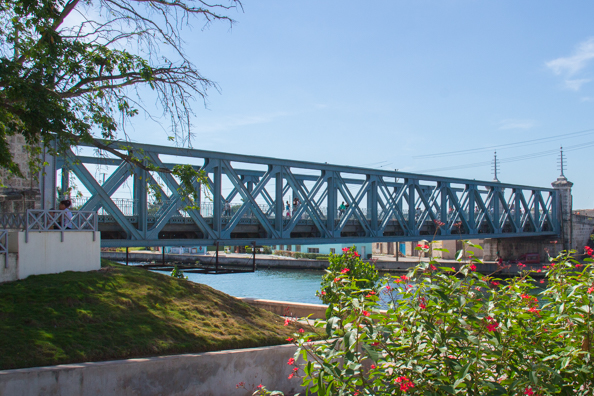 We walked along the river bank through some very trim parkland with trees and flower beds to the next bridge. This one carries the main road over the estuary with the sea beyond. As we crossed that bridge intending to walk back into the town centre I was distracted by the sight of some colourful sails and crossed over to the Matanzas Bay side of the dual carriageway to watch some teenagers setting sail in the bay. I was greeted with waves and shouts and requests to take their photos. I was enjoying the inter-action with the locals most of whom shouted hello as I passed them. 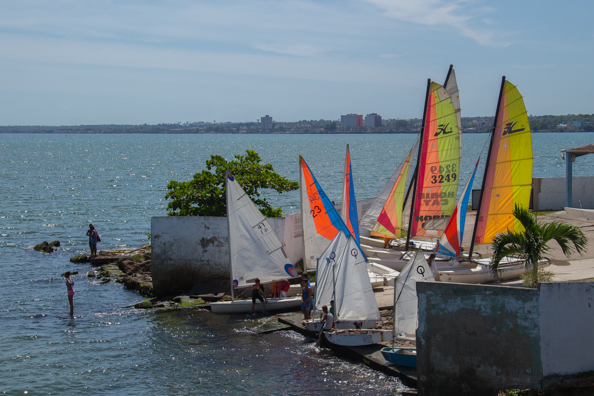 Vultures are very common in Cuba but I had never seen any up close so the sight of a pair of them scavenging by the road was an opportunity not to be missed. I walked further down the road to get a closer look. When I looked around my companions were dots in the distance. I was not concerned as I had recognised the road I was on and knew I must be close to my goal. I believe it is known as the Mural de la Cuidad, the mural. Sure enough, a short distance down the road and there it was. It looked just as stunning as it had done from the window of our bus. Then across the street I spotted another, more abstract mural, also very tasteful. 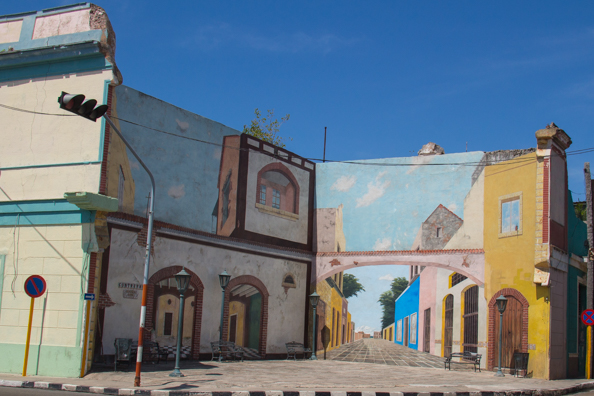 Around the corner from the mural was another bridge, La Concordia Bridge, which carries traffic across the Ayuntamiento or Yumuri River. I spent some time there watching the old American cars and ancient buses lumbering across it. The cars here were genuine and had not been smartened up to ferry tourists around. Down river of La Concordia was a footbridge and up river a railway bridge. Several tracks brought freight trains into the town and also served as a means of crossing rivers for the locals. 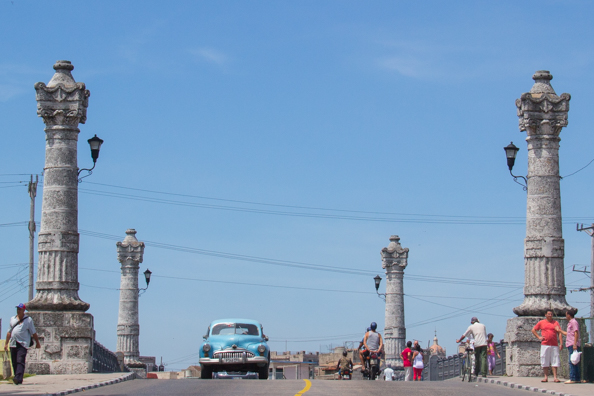 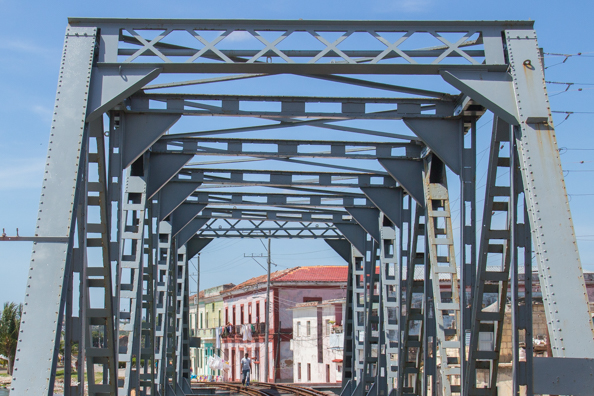 It was time to make my way back to Plaza Libertad where our car was waiting. I had not noticed any shops during my wanderings which was not surprising as many of them were just the front room of a house with their wares sparsely displayed on shelf units or chairs. The grocery stores had very small counters with all the goods on shelves behind them. Shoppers had to stand at the counter pointing to the items they wanted. But my favourite was the pharmacy with its dark wooden panelling on which just a few items were displayed. 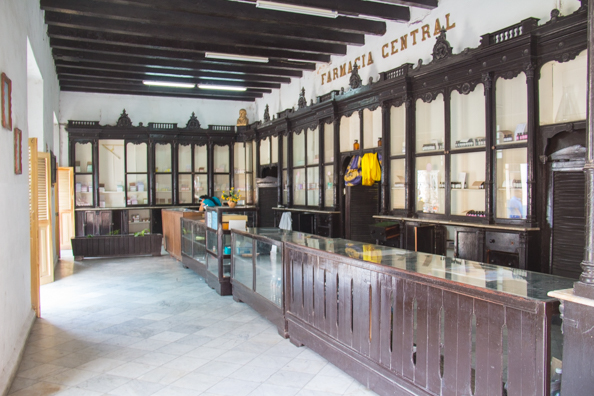 Seeing the pharmacy reminded me that Matanzas has a Pharmacy Museum but I had no idea where it was. But when I arrived at our car with thirty minutes to spare I was delighted to discover that it was in the Plaza Libertad and our car was parked outside it. I went inside and was greeted by a very enthusiastic curator who took my money and gave me some information in English. I did not have time to read the information as I was escorted from room to room and given a full explanation of everything I was seeing. I could just about follow what I was being told but if I allowed a shadow of doubt to cross my face the information was repeated as my companion watched closely for enlightenment to dawn. The museum was the home of a French chemist called Triolet. The family lived on the first floor of the large house and the whole of the lower floor was devoted to the manufacture, storage and sale of his pills and potions. Dr Ernesto Triolet founded his private French pharmacy in 1882 and it was converted into a museum. Many of the original utensils, instruments and storage jars are on display including a whole cabinet of glass bottles containing scented oils. When the door of this cabinet was opened the various perfumes floated around me. 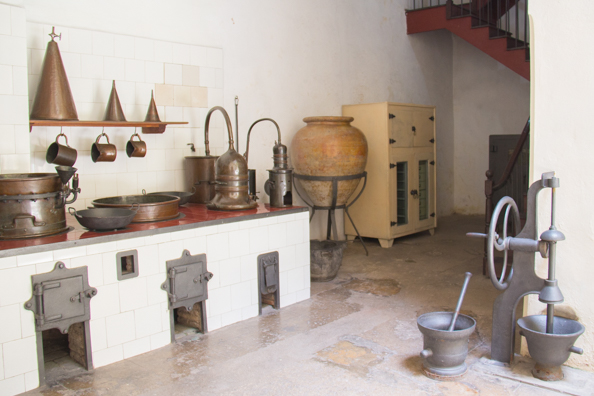 I had thoroughly enjoyed my exploration of Matanzas even though most of the time I had had no idea what I was looking at. My companions had enjoyed a very different experience. They had bought a twenty-year old guide of Cuba from a second-hand book shop and then spent most of their time looking for a building heralded as worth visiting. Eventually they realised that it was unrecognisable as it was being seriously renovated and we had been sitting next to it when we had stopped for coffee. Next stop the shops – nothing to buy but a chance to peek inside some private houses. Finally, the settled themselves outside a cafe to watch the locals going about their business. We had all enjoyed a very genuine Cuban experience. 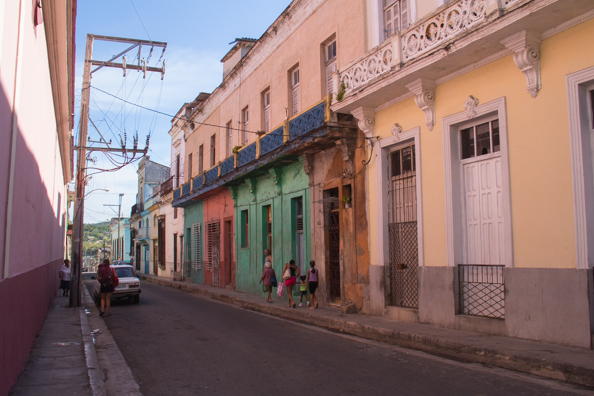 I went to Cuba on a tour organised by Solos Holidays Ltd – we flew there with Virgin Atlantic and stayed in good quality hotels throughout our tour.