My recent visit to Siem Reap in Cambodia was my second visit there and I intended to profit from lessons learnt from that first experience. I had learnt that Angkor Wat is only one of many temples in the ancient city of Angkor Thom. Angkor was part of the Khmer Empire and during its ascendency it’s greatest king, Jayavarman VII (1181-1219), built Angkor Thom. Many of the original buildings, including its Royal Palace, were constructed in wood and no longer exist. Tourists flock to the area to visit these temples and the best way to avoid the crowds is to start early in the morning (the temples are open from 05:00) and not to follow the ‘prescribed’ order. Angkor Wat, the largest temple, attracts most of its visits in the late afternoon – to watch the sun go down – so we headed there early one morning. 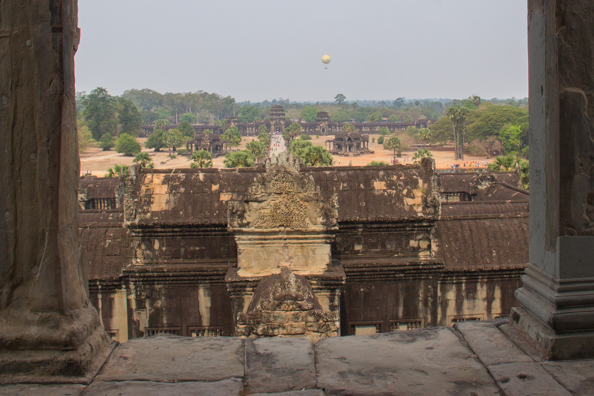 On our way to Angkor Wat we had to stop at the ticket office to get our passes. As there were no queues it only took minutes to take our photographs (not the most flattering) and attach them to our pass. We were instructed to wear this pass at all times as they are regularly checked. Our bus dropped us off some distance from the temple itself but we had great views across the moat to the temple. As we walked along our guide, Kimthay, explained some of the mysticism surrounding the construction of the city and its temples. We started at the most famous temple of all, Angkor Wat, whose buildings cover an area of eighty-one hectares. It’s distinctive five towers are featured on the Cambodian flag and it is considered by art historians to be the best example of classical Khmer art and architecture. The enclosing wall represents the mountains at the edge of the world and the surrounding moat is the ocean beyond. It was the end of a long, dry season and a drought had set in but even so the moat was still full, fed by a reservoir built for the purpose. The complex was virtually empty and we were able to stroll around admiring the architecture, the elaborate decoration and tantalising glimpses of statues of Buddha. As we reached the third tier of the main temple the crowds were building up and we had to wait for short time before scrambling up the steep steps to the top level. Once there we were able to complete a circuit and appreciate the size of this complex and enjoy the views of the surrounding countryside. 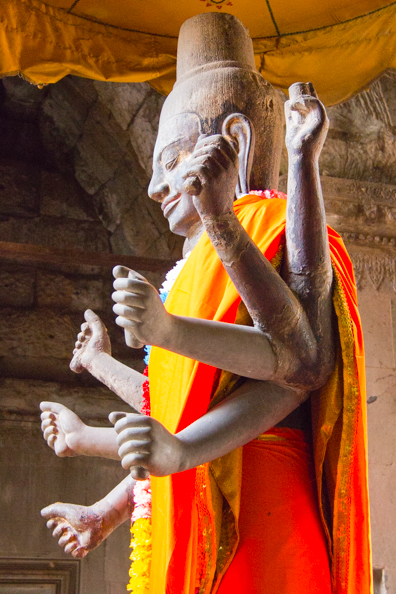 After leaving Ankgkor Wat we moved on to Prasat Kravan which it is thought was built by high court officials following Hinduism due to sculptures in two of its five towers depicting Vishnu and his consort Laksmi. These carvings are unique in Khmer architecture. This temple has been carefully reconstructed by the French so visitors can clearly see the unusual arrangement of one row of five towers on a single terrace. As the temperature rose so our interest began to decline and once we had explored this temple we were glad to retire to our hotel for a break. 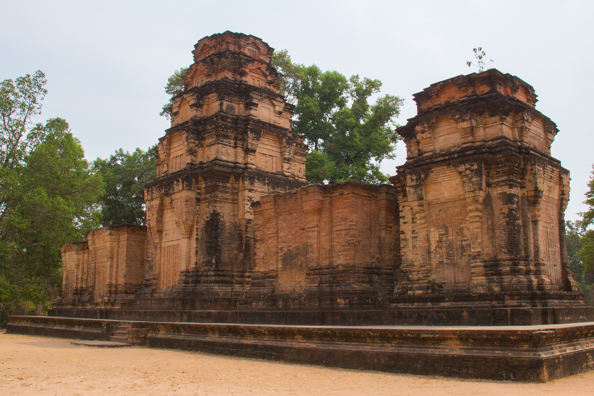 That afternoon we visited the Bayon Temple which is memorable due to its fifty-four towers decorated with with more than two hundred smiling faces of Avolokitesvara. He was the most popular of the Mahayana (a branch of Buddhism) bodhisattvas. A bodhisattva is a living person who seeks enlightenment both for himself and for others, a compassionate being who shares the suffering of others. It was a strange experience being surrounded by so many identical and serene faces. 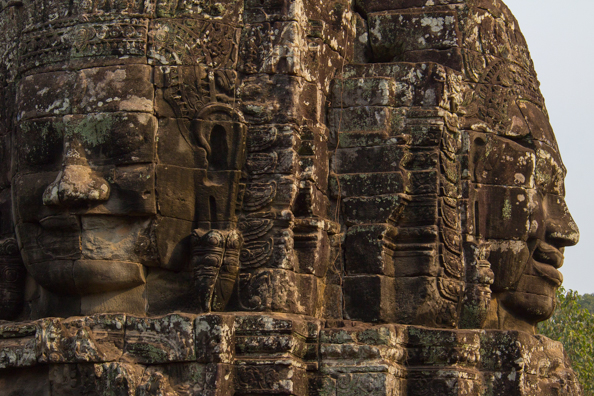 After strolling through the Royal Enclosure where the Royal Palace once and where visitors can still see the temple mountain Phimeanakas and its surrounding pools. After doing a circuit of one of these pools we emerged on the Elephants’ Terrace. Below us was a hive of activity as the preparations to celebrate the Cambodian New Year the following week, the first week in April were well in hand. that would start (the terrace of the leper king. From the terrace we could see the preparations going on for the New Year celebrations that start on 07 April. Colourful stalls were being erected by the roadside and we had to walk the length of them, in the heat, to get back to our bus. I had been wondering why our bus was never parked close to the sites we were visiting whereas other buses parked much closer. When I queried this Kimthay said it was because the bus park was full. I could see this was not the case and pursued my enquiry. Finally, he conceded that the driver did not want to pay the parking fee. The promise of a good tip at the end our our stay quickly resolved that problem. 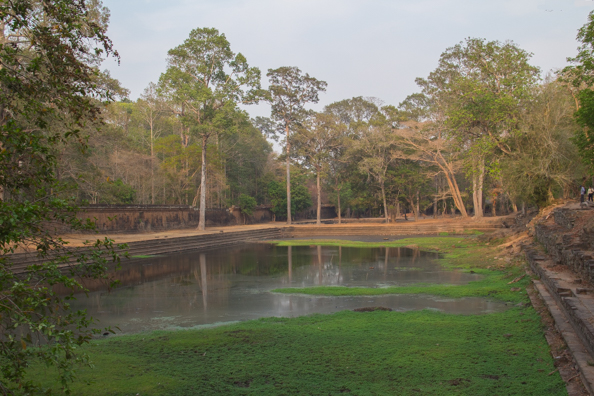 Everyone was entranced by Ta Prohm our destination early the next morning. Its beautiful buildings have lain untouched for hundreds of years and the jungle has gradually claimed them back. Roots climb up the walls and whole trees sprout out of the roofs. It is no wonder this UNESCO World Heritage Site was used as the set for films such as Tomb Raider and Indiana Jones Temple of Doom. 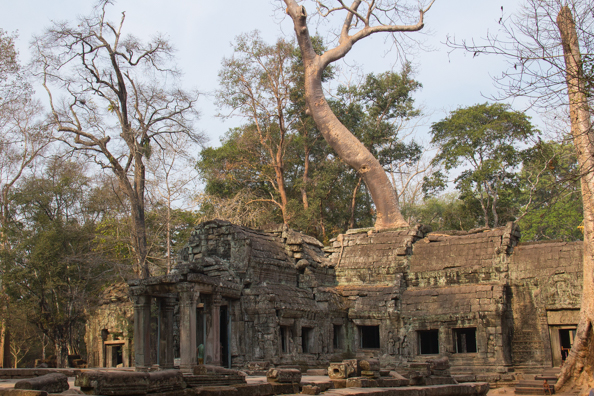 That afternoon my companions opted for the cool of the pool but I was tempted to continue my exploration of the temples by the promise of one that was very different from the others. Prasat Banteay Srei did not disappoint. It is much smaller than the other temples we had seen and constructed using a pinkish sandstone which is exquisitely decorated. 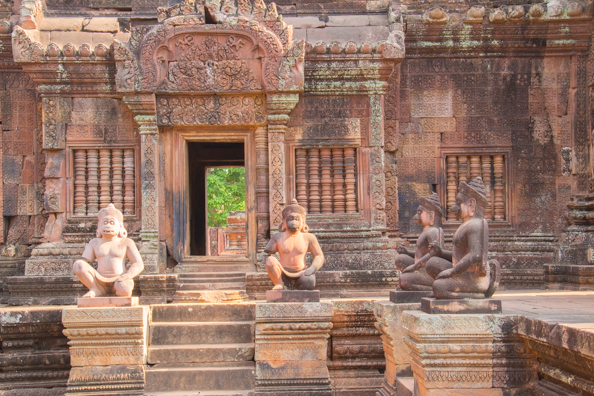 As Banteay Srei is a thirty-minute drive from Siem Reap I had the added bonus of driving through the countryside and seeing typical farmhouses built on stilts. The original houses were constructed using wood and raised above the ground so they did not flood during the floods of the rainy season. However, these houses needed to be replaced regularly so now bricks and mortar are becoming the more popular building material and the space beneath the houses are often filled in. 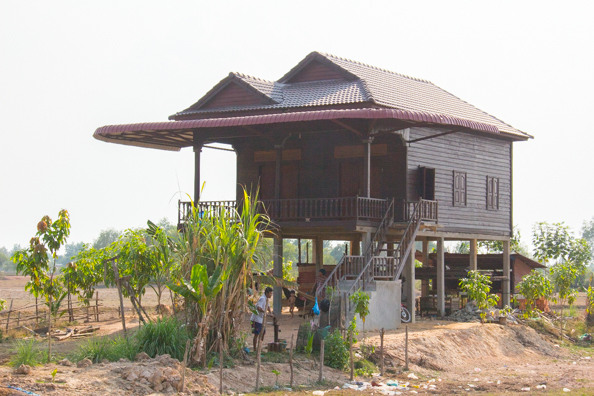 The great lake of Tonle Sap is very close to Siem Reap and on my last visit we had been taken by boat from the lakeside across a huge expanse of water to visit the floating village of Chong Khneas. When we visited the lake on our last day it was a very different story – a large muddy puddle accessed by a narrow muddy stream. We had to drive across the bed of the lake to reach the edge of the receding waters. On our way we passed one of the floating houses aground by the roadside but still inhabited. Its owners had given up the struggle to keep up with the receding waters. I could hardly believe what I was seeing. A large area of the lake bed was now under cultivation and water buffalo grazed on the grass. Finally, we reached a row of boats moored up along a muddy bank and after boarding chugged slowly down the middle of a narrow muddy river. It was still very early in the morning and we were the only tourists on the water. When we reached the end of the main channel through the floating village of Chong Khneas we turned back and stopped at one of the houses that also happened to be a souvenir shop. While my companions shopped I explored and got a real fright when I came across a huge crocodile basking in his enclosure under the house. The local raise crocodiles to sell for their meat and their skin. Traditionally fishermen they are now also learning to cultivate the exposed land when the water level goes right down. As we made our way back down the river we met a large flotilla of tourists heading for the village. Yet again we had profited by our early start. 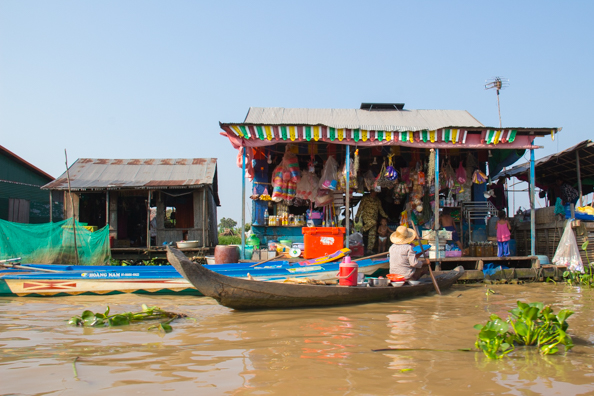 I will leave you with two images of Tonle Sap Lake one in May 2016 and the other in November 2011. What a difference a season makes. 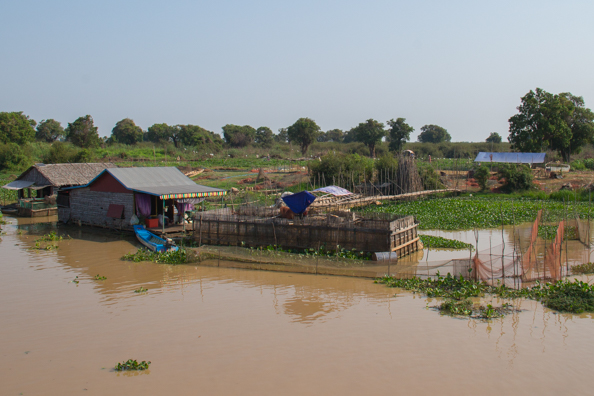 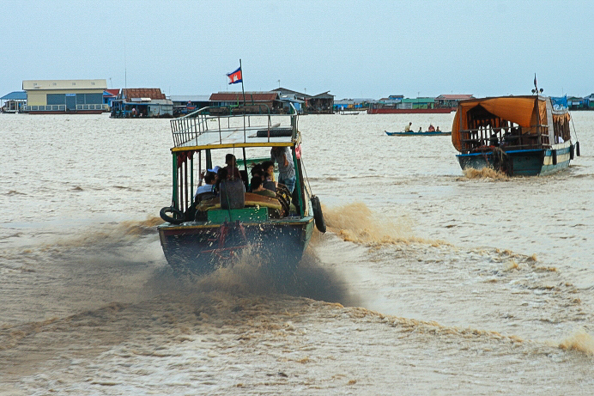