A Nightingale Sang in Ba Dinh Square in Hanoi, Vietnam

One of the purest voices I have ever heard was singing a haunting melody as we entered Ba Dinh Square in Hanoi. Ahead of us the mausoleum of Ho Chi Minh glowed pink. The guards in their stark white uniforms stood to attention on ether side of the massive entrance. People strolled around the square or sat talking quietly on the huge grassy area opposite the mausoleum. It was so romantic. Yet by day it is just a large empty space surrounding a massive square building. Visitors to the mausoleum queue outside the building before shuffling past the embalmed body of this highly respected icon of Vietnamese politics. Before going inside their dress will have been checked for its suitability, bags and cameras will have been stored in the cloakroom and some are even made to remove their spectacles. The contrast is typical of a country emerging from the shackles of Communism. 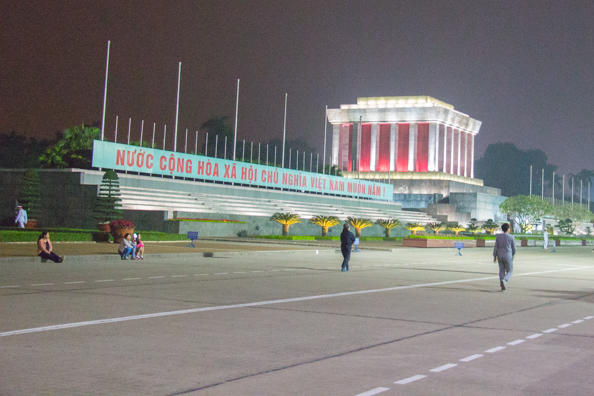 The next morning, still on a high after my lovely evening walk I rose early and walked through the old town to Hoan Kiem Lake. On my way I called in at the pharmacy in the hope they would have some re-hydration sachets. I had only just finished enunciating the word dehydration when a large box was produced from under the counter and a handful of sachets were produced from in its depths. Ten were counted out and I was told that was one litre, another ten were counted out and I was too that was two litres and would cost me twenty thousand Vietnamese Dong. I paid up and left fervently hoping she had understood I wanted to re-hydrate and not de-hydrate. She had and they worked a treat. 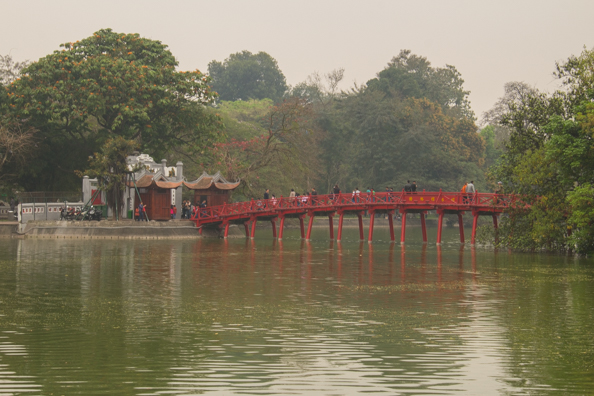 Pavements full of parked scooters and motorbikes and people sitting on low plastic stool eating their breakfast – bowls of noodles. I had emerged from the maze of narrow, busy streets and was soon enjoying the cool breeze that floated across the water and kissed my face. Small groups of people and a few individuals were exercising or doing Tai Chi. Other sat on the benches facing the water reading newspapers or just contemplating the day ahead. As I neared the entrance to the Ngoc Son Temple the peace was shattered. Several large groups of school children materialised from nowhere and a few harassed teachers began arranging them on the bridge to take group photos. I could not resist the temptation to get some of my own images. When they spotted me they all joined in and gathered around me shouting hello. It was a lovely moment. 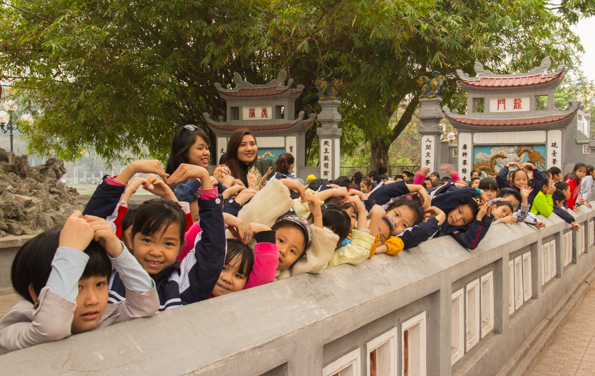 As if by magic the children melted away and suddenly I was the only person on the bridge. I made my way across it the Ngoc Son Temple on Jade Island. I was their first visitor that morning which is probably why I had not noticed the ticket office on the other side of the bridge. My way was barred and my heart sank. I wanted to explore the temple before it was full of visitors. I was not allowed to pay the man at the door but some exaggerated sign language involving an anxious expression and lots of pointing at my watch and I was ushered inside. It was a novel experience wandering round a deserted temple admiring the ornate interior. But I welcomed the arrival of another visitor to add some interest to my images. 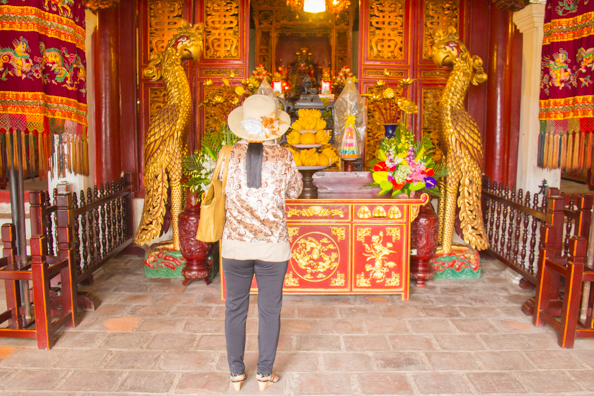 Later that morning, confused by the muddle of streets, people and traffic I decided to do a tour of the old town on an electric vehicle to orientate myself. These vehicles cost about £10 and can seat 6 people. The tour lasts one hour. It was an interesting experience and we were invited to get our twice – once to explore the indoor market and a second time to visit Dinh Kim Ngan. Although it looks like a temple a dinh is a community house of which there are many in the old quarter of Hanoi. This dinh includes a place of worship but it also operates as a meeting place for the community and they sometimes feature small exhibitions and when I visited there was a display of photographs in the courtyard. i was captivated by a beautiful white horse to the side of the altar inside. The horse is a cultural icon in Vietnam. 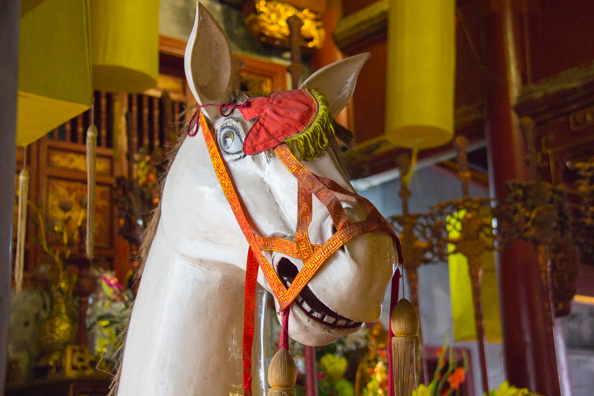 By the time we finished at the Hoan Kiem Lake where the vehicles are based I had the plan of the city in my head and was confident about walking around on my own. I only had the traffic to worry about now. 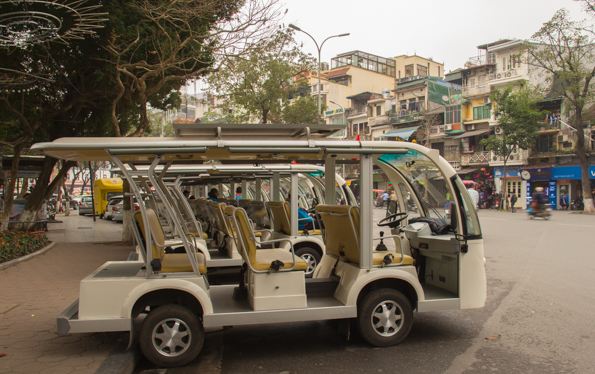 Having walked past the cathedral of St Joseph, the only Catholic church in Hanoi, the previous evening and then driven past it on my tour I was curious to visit the interior. I walked there only to discover the building was securely locked. The courtyard in front of the church was packed with school children playing football and tag. More and more of them kept arriving and I stopped to watch them. Then parents and grandparents came along on their scooters or on foot and collected the children to continue their journey home. 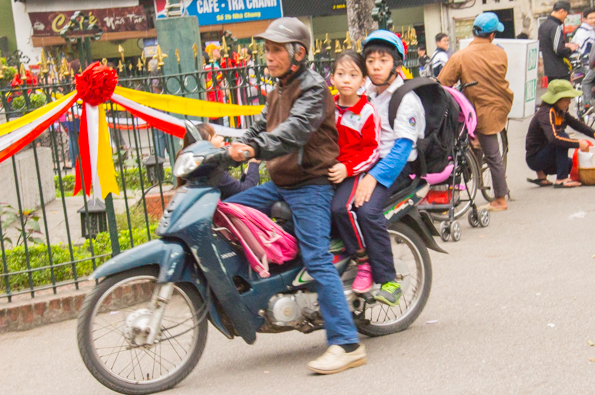 That evening I watched a show at the Thang Long Water Puppet Theatre. The history of this art from can be traced back to the eleventh century. When the paddy fields were flooded the workers would tell stories to amuse themselves using puppets that floated on the surface of the water. The people operating these puppets would stand behind a screen and use long rods to operate the puppets so it looked as though the puppets were moving by themselves. 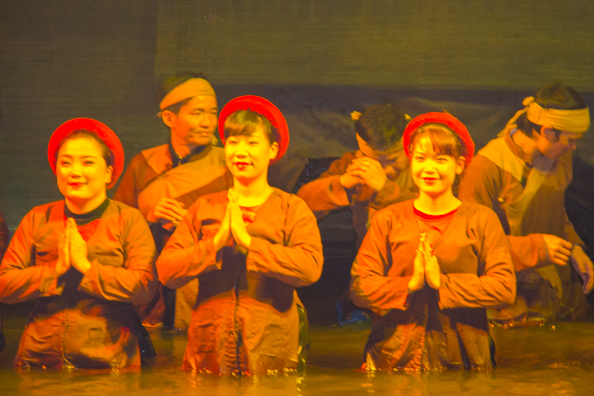 This tradition is unique to North Vietnam but performances can now be seen all over the world. It was interesting to see a performance in the birthplace of this art. The brightly coloured dolls and exotic creatures bobbed around the square pond on the stage accompanied by music and vocal encouragement from musicians and singers positioned at the side. Although I could not understand the story it was fascinating watching the lively and noisy performance. Such a contrast to the tranquility of the previous evening when it seemed a nightingale was singing in Ba Dinh Square. 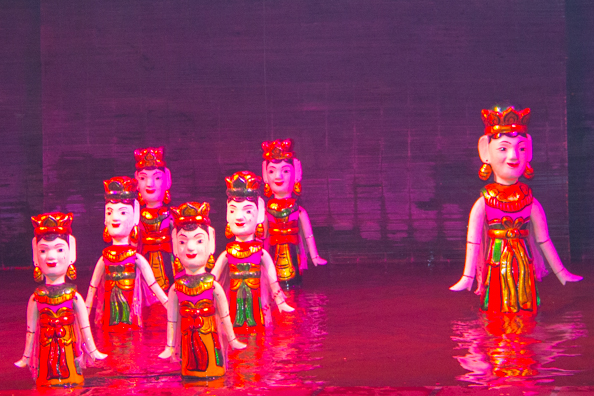