A Cruise around Ha Long Bay in Vietnam

Ha Long Bay also spelt Halong Bay, in the Gulf of Tonkin, is so beautiful and unusual it has not only been designated a UNESCO World Heritage Site but has also been voted one of the seven natural wonders of the world. Around 1,600 islands rise up from the sea forming a wonderful seascape of water and limestone pillars. Most of these islands are uninhabited and their natural beauty is complimented by their great biological interest. 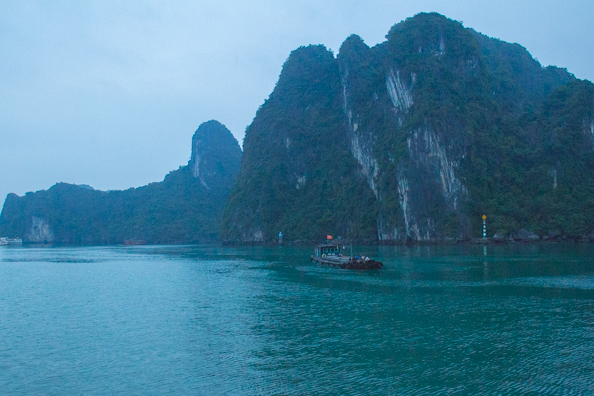 The thought of spending a day and a night cruising in this beautiful bay was worth the pain of getting up at five in the morning to store luggage at Church Boutique Hotel in the city centre hotel – we would be returning the next afternoon. We had to negotiate the early morning traffic. Hanoi always seems to be in a state of rush hour. One-way streets only apply to cars, lorries and buses as scooters, bikes and motorbikes go both ways whatever the street signs dictate. Traffic lights and pedestrian crossings are meaningless. Every time we left or returned to our hotel a member of staff would escort us across the road and instructed us to keep walking and never to run. It was not long before we reached the main road and were soon speeding along. On each side of this road we cold see bread sellers their products stacked high on their bikes. Hanoi is famous for its bread 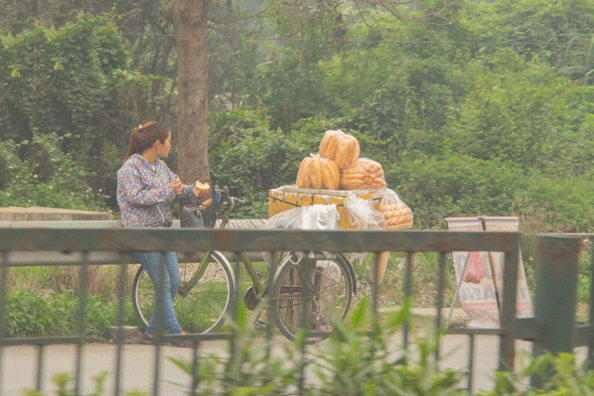 We had two breaks during our journey. The Production Workshop was our first stop and we watched slightly disabled people embroidering lovely pictures and doing other tasks. This enterprise gives them a place to work and also an opportunity to sell that work. It is an emporium with several sections selling art, pottery, souvenirs and clothes. There is also a coffee shop. Our second break was at a cultivated pearl factory where we were shown how the pearls are grown and then offered the opportunity to browse the jewellery on display in their showroom. 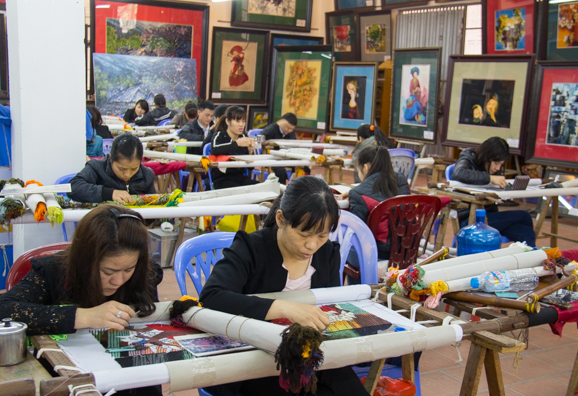 When we arrived the long quay was bustling with people waiting for the tenders to take them to their respective boats for their cruise around the bay. Our boat was one of the smaller boats, Victory Spirit, with just sixteen cabins. We cruised to the bay soon after we settled in. Lunch was served on board as we drifted past the stunning scenery. Despite the large number of people and people and boats setting off from the jetty they were soon obscured by the many islands and it soon felt as though we were the only cruise ship in the bay. After lunch on board we went up to the top deck to enjoy the cool breeze and take photographs of the natural beauty surrounding us. Soon after our boat dropped anchor in the bay small boats packed with souvenirs and drinks started circling our boat trying to attract our attention to show us their wares. 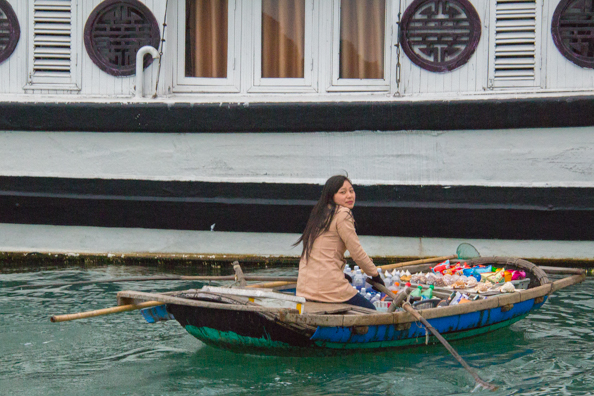 Our cruise included an excursion to the Dau Go Cave. Visitors have to climb a long flight of stone steps to enter the cave. Once inside a path winds its way through an intricate system of stalactites and stalagmites that guides will try and transform into a variety of animals for you. We had fun trying to guess what animal he was seeing. The rockadile in particular raised a laugh. Lights inside the cave cast a warm and colourful glow inside the caverns and across the massive ceiling. 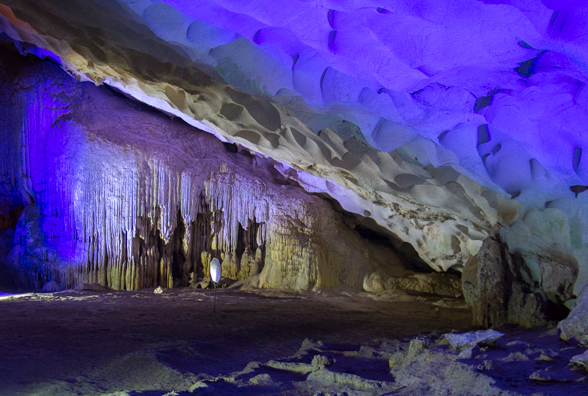 According to legend the name of this cave, Dau Go which means wooden head celebrates the victory of the Supreme Commander Tran Hung Dao (1228-1300) against a Mongol invasion in the 13th Century. This victory occurred on Bach Dang River where Hung Dao hid booby traps of giant steel-tipped wooden stakes beneath the water. Afterwards some of those wooden floated to this cave and were discovered by the local people. The cave has three main sections and there are steps leading from the second section section to a viewing platform outside and a panoramic view of the bay below us. 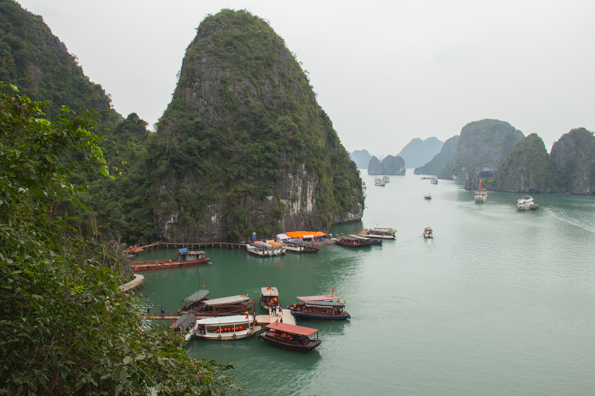 I woke early the next morning and lay on my bed watching the bay come to life through my open window. My bed was up against the window and if I rolled over I would drop straight into the water below. Soothing music drew me towards the deck where the early morning yoga session was taking place. Around us more boats appeared from behind the shelter of the islands. All the boats were unfurling their sales as they drifted across the bay. It was a beautiful sight, particularly as all the boats are painted white – a regulation that was introduced a few years earlier. 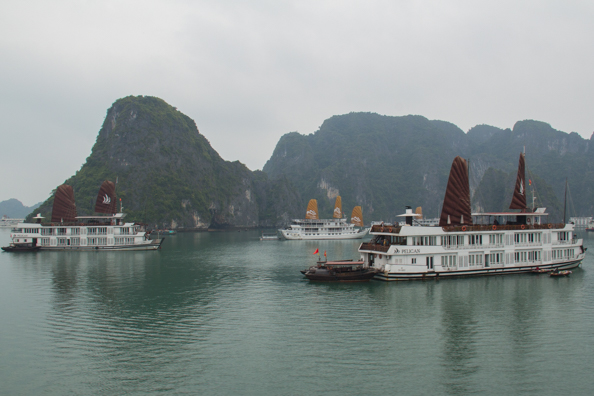 After a light breakfast the tender from our boat took us across the bay for our morning activities – canoeing or a trip in a rowing boat. The canoes were moored on a jetty adjacent to a floating fish farm. As we made our way there we passed other fish farms bobbing on the water. 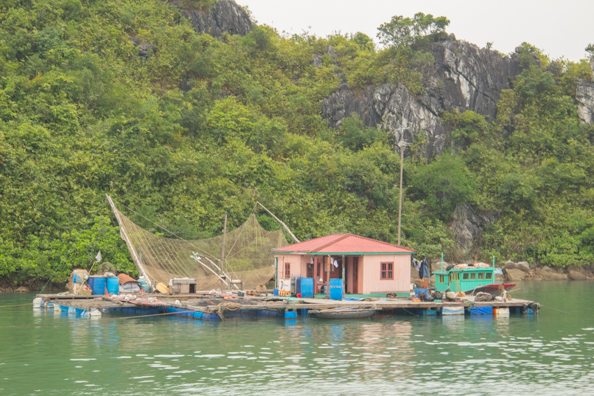 At midday we set off on our return journey to Hanoi. On our way to Halong Bay we had been fascinated by the sight of cultivated fields dotted with workers. I had been itching to stop and capture these evocative images and was very pleased to hear that I was not alone when our driver was peppered with requests to stop and take photos. 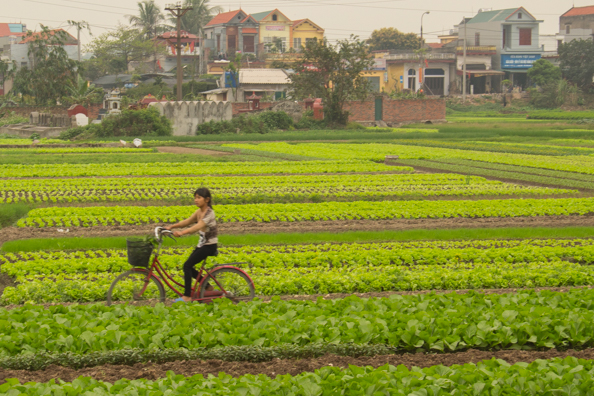 The soil is very fertile and a large variety of crops can be grown. The most important crop is rice . As soon as we spotted workers in the paddy fields there was a chorus of requests for a chance to get out and take photos. An iconic image of Vietnam where the staple diet is rice. 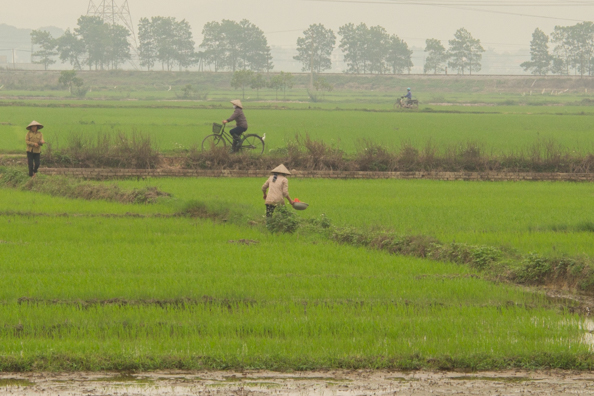