Five Highlights of the Ancient City of Hoi An in Vietnam

The Lanterns of Hoi An

There are many good reasons to visit the vibrant UNESCO city of Hoi An a town that lights up every night as dusk falls on its ancient buildings. Scooters surged into the town and park wherever they can find a space so their occupants can walk along the banks of the Thu Bon river into the old town, for a small fee that has to be paid by visitors to this area. Hoi An is a popular venue for festivals and the remnants of an international food festival which had taken place last week mingled with the new decorations for the monthly festival of light that is held every month to celebrate the full moon. The lights along the bank cast colourful reflections in the black water beyond them. Mythical animals ablaze with lights appear to float on the surface. Soon after we arrived in the town we joined the stream of pedestrians into the old town. After eating at the Secret Garden Restaurant down one of the narrow streets off the main thoroughfare we visited the night market which features several stalls ablaze with traditional lanterns. 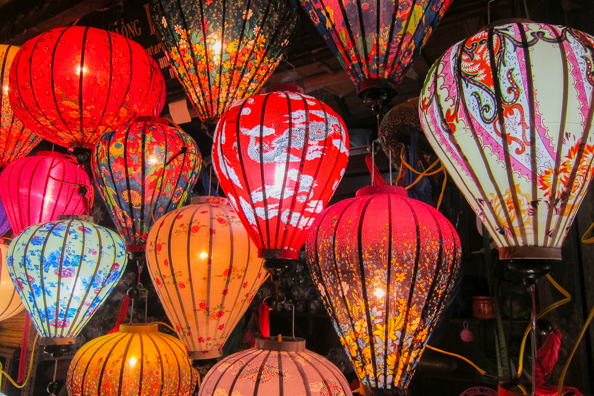 Ancient Buildings of Hoi An

The ancient Merchants House or Tan Ky House, the home of a Vietnamese merchant was built nearly two centuries ago. It is still owned by the same family who have preserved its interior design and old furniture, as well as many relics of the prospering trade and cultural exchanges among the Vietnamese, Chinese and Japanese during the late seventeenth century. The four rooms in this old house are small and packed with various beautiful antiques mainly made of wood. Each of these rooms had a different purposes: one for welcoming the Chinese merchants, one is the living room, the third is the courtyard and the last one is the bedroom. 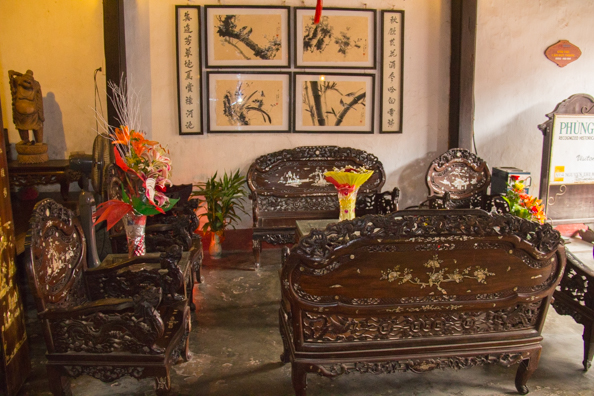 Phuc Kien Temple is a place of meeting and worship for the largest Chinese ethnic group in Hoi An, the Fujian. Its most important building is the Jinshang golden mountain temple which is dedicated to Thien Hau, the goddess of the sea and protector of the sailors. Originally the building was a thatched pagoda called Kim Son, built by Viet people living in Hoi An in 1692 and dedicated to Buddha. Damage to this building forced the owners to sell it in 1759 to the rich Phuoc Kien traders from China who came to Hoi An. Following its restoration, the pagoda was renamed Phuoc Kien Assembly Hall. It remains true to its origins relating to the sea and there are also lots of animal symbols in the design and architecture all of which signify different features of the Chinese culture. I was most impressed by the large fountain in the courtyard featuring a splendid dragon. 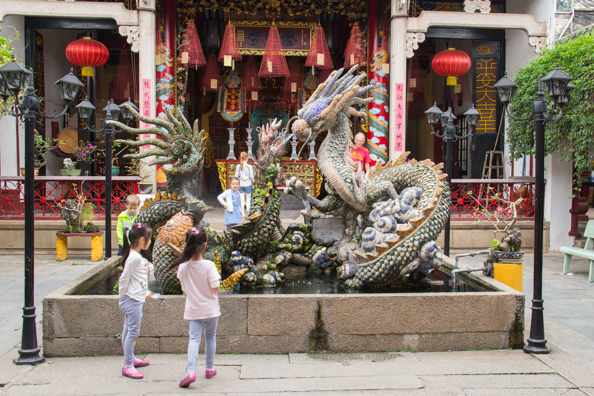 The old Japanese Covered Bridge or Cau Chua Pagoda is one of Vietnam’s iconic attractions. This lovely example of Japanese architecture dates back to the eighteenth century and was built by the Japanese, it has been claimed, to link the Japanese and Chinese quarters on either side of a tributary of the Thu Bon river. Sculptures of dogs and monkeys guard the bridge at either end and are said to represent the Chinese years during which many Japanese Emperors were born. But they could also commemorate the fact that the bridge was started in the year of the dog and completed in the year of the monkey. Renovation work on the bridge in 1986 included the restoration of the arch that had been flattened to make way for cars. The bridge was built with a roof to provided shelter from rain and sun and inside there is a temple dedicated to the northern God Tran Vo Bac De, the God of Weather. People believe that this god controls the weather and natural calamities so he is both worshipped and feared. 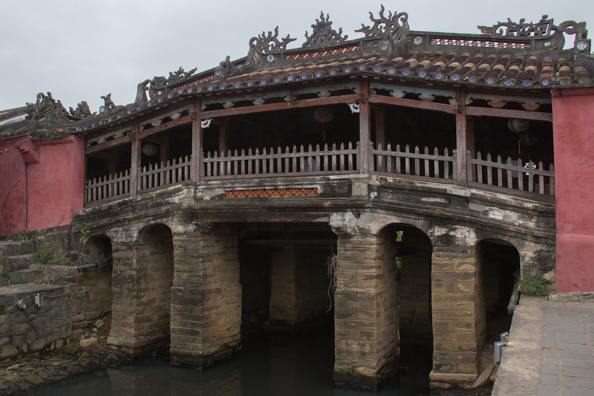 The Handicrafts of Hoi An

Hoi An is renowned for its tailoring and visitors can order a whole wardrobe that will be made for them within forty-eight hours, including fittings. The choice of fabrics and styles is overwhelming and the whirr of Singer sewing machines pervades the atmosphere in the district where the tailors are found. But the town is also famous for its handicrafts including embroidery, items made from silk available at the silk village, and art. I saw a fabulous painting in one of the many art galleries and vowed to go back and buy it later. But I never found that art gallery again! At least I managed to get a photograph to remind me of the one that got away. 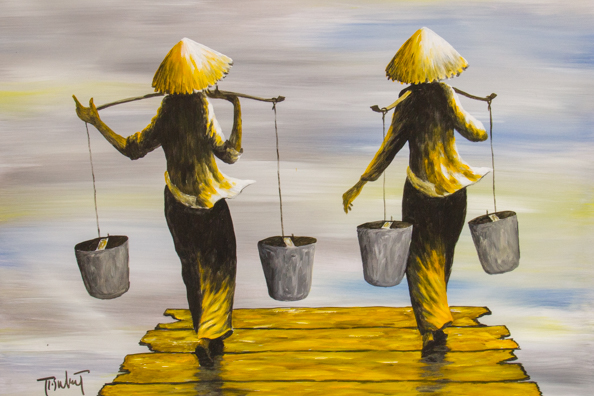 The Marble Mountains are formed by a group of five marble and limestone hills. Looking up at the peak of the most popular mountain, the Mountain of Water, the visitor can see the roofs of the temples and pagodas that attract both visitors and pilgrims. The latter are more likely to follow the path that is strewn with Buddhist sanctuaries and places of worship dating back to the seventeenth century. There are also several caves housing Buddhas sculpted out of the rock. Visitors who do not relish walking to the top can take the elevator that whisks them to the top in minutes at a modest cost of $2. From the top there are good views of the other three hills, the town of Danang below and its famous China Beach or Non Nuoc. It was from the water lapping this beach that, according to legend, a dragon emerged and laid an egg. When this egg hatched a thousand days later a beautiful girl stepped out and the fragments of the shell eventually evolved into the five mystical Marble Mountains. 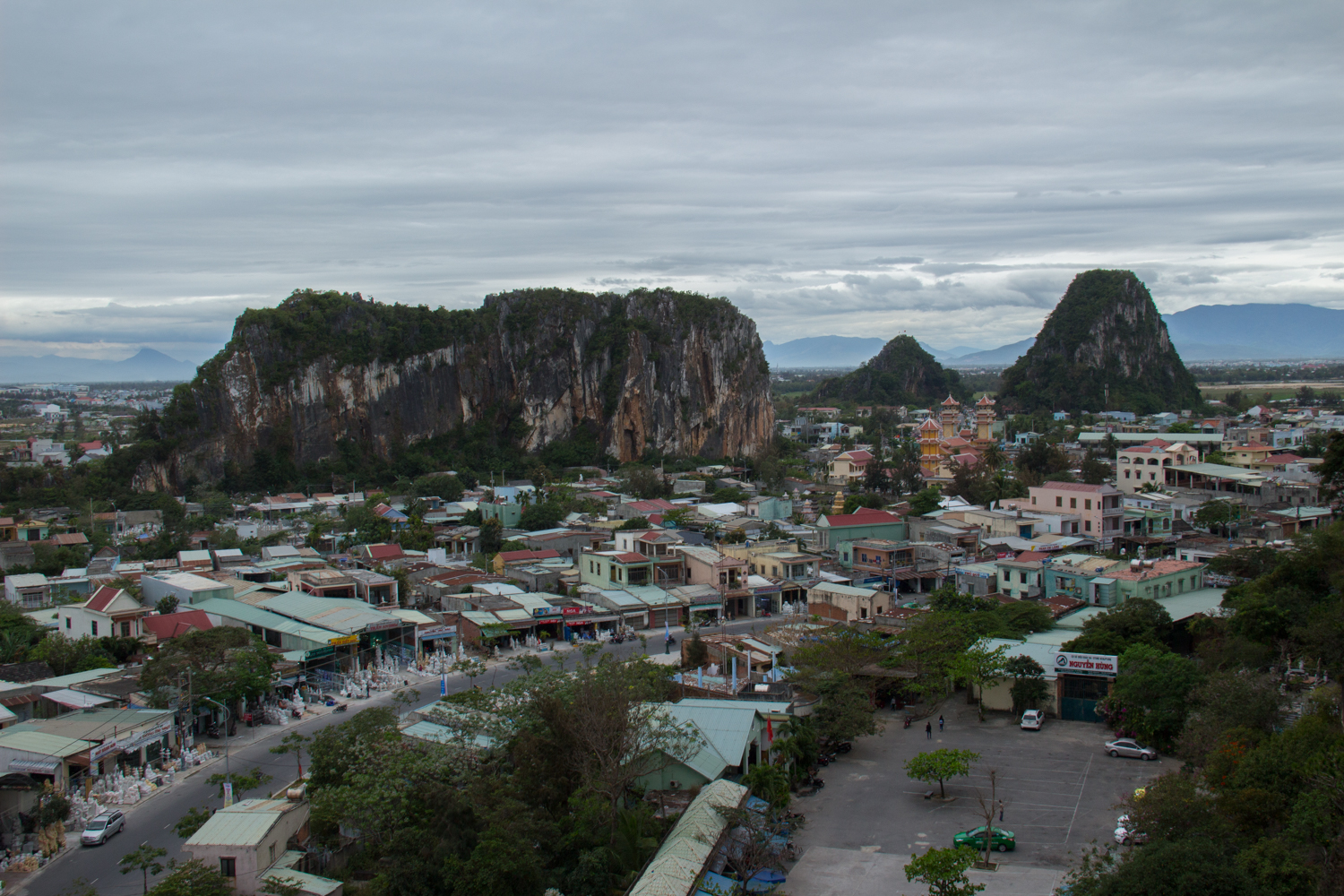 The My Son Sanctuary

I visited the My Son Sanctuary four years ago and I had to walk the three kilometres through the jungle from the ticket office (a wooden hut) to the ruins of the temples. When I reached the temples they were overgrown and very few were recognisable as as temples. Now the visitor pays the entrance fee at a ticket office in a modern block and is then whisked down the newly laid road to a visitor centre centre with an open-sided theatre that features daily performances of traditional music and dance. Just beyond the centre is the first of a series of tower-temples built between the fourth and thirteenth centuries by a unique culture that originated from Indian Hinduism, the Champa Kingdom. Many of these temples are dedicated to Hindu gods such as Krishna, Vishnu and Shiva. These temples are unique in South East Asia which is why the site was designated a UNESCO site in 1999. The temples were discovered by French colonialists in the early twentieth century when the first attempts at conservation began. Subsequently many of the temples were damaged during World War II, the First Indo-China War and, especially, during the Second Indo-China War. Conservation work was resumed in earnest after the unification of Vietnam in 1975 and is currently being undertaken to a high standard by both national and international teams working on the site. A lot of work still has to be done including de-mining the whole area but progress is being made, albeit slowly. 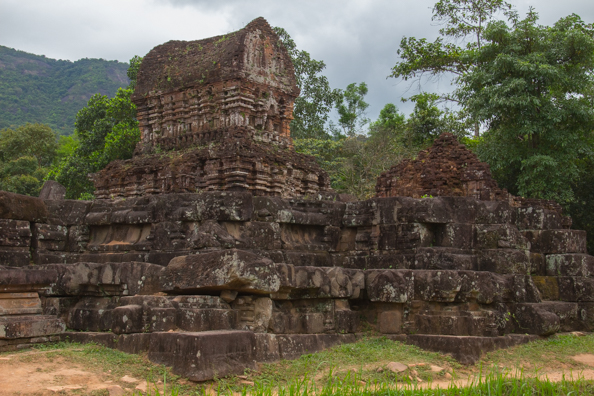