Some Highlights of Ho Chi Minh City (Saigon) in Vietnam

What do you do with twelve exhausted travellers who have arrived in Ho Chi Minh City at six in the morning – too early to check into their hotel? Take them to Trung Nguyen Legend coffee shop to drink Vietnamese coffee. It was here that my love affair with traditional Vietnamese coffee with condensed milk began. I started every day of our tour through Vietnam with this invigorating mix. 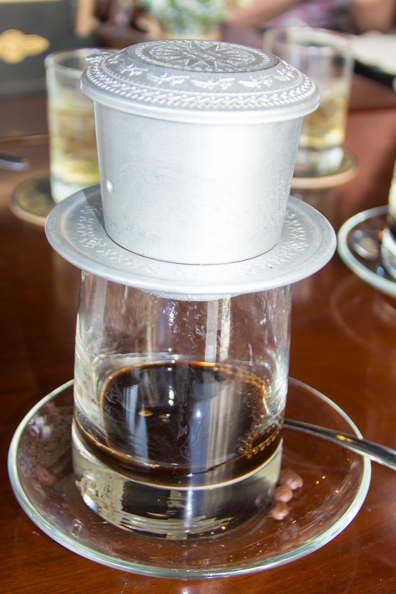 I was not aware that Vietnam produced coffee so it was a surprise to learn that it is the second largest producer of coffee in the world, second to Brazil. The French established a thriving coffee industry in South East Asia at the end of the nineteenth century and since then Vietnam has become the leading producer of coffee due to its ideal climate and landscape. Several different varieties of coffee grow well here and this, combined with good roasting techniques has resulted in some excellent coffee. There are several different varieties including one of the world’s most famous coffees, the Legendee, l commonly referred to as Weasel coffee. This is a unique enzymatically-treated coffee that, apparently, releases flavours from the beans that are not released during mechanical processing. The official name comes from stories about natives who drank a brew made from coffee beans that had been partially digested by small furry animals that have come to be referred to as weasels but are more likely to have been a civet. This very expensive coffee is now produced by Trung Nguyen using natural enzymes that duplicate the process leaving weasels out of the equation. Nevertheless, I was not tempted to try it. But I was tempted to try the green tea sponge cake on display in coffee shop. I should have known that something so green was probably not going to taste great! It did not, but it looks very pretty. 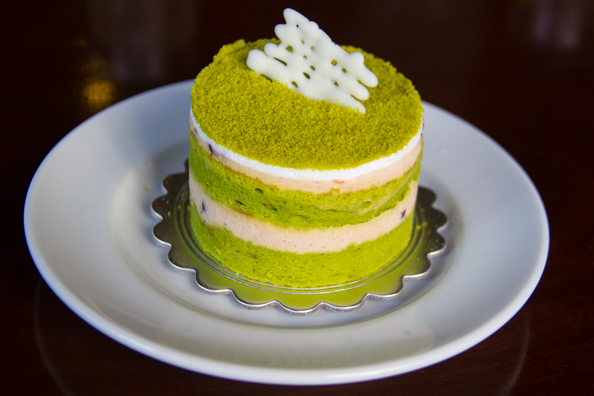 Revived after our coffee break we set off for the Reunification Palace. This very square, plain building achieved fame in 1975 when, to signify the end of the Vietnam War, a tank from the North Vietnam Army crashed through its main gate. Two of the tanks that were used when the palace was captured are parked in the grounds. Inside time stands still as the Palace remains as it was when it was captured. Although, it is used to host large functions. During our visit I watched a traditional band setting up on the steps – it took twenty minutes. They played for two minutes and then packed up and left. 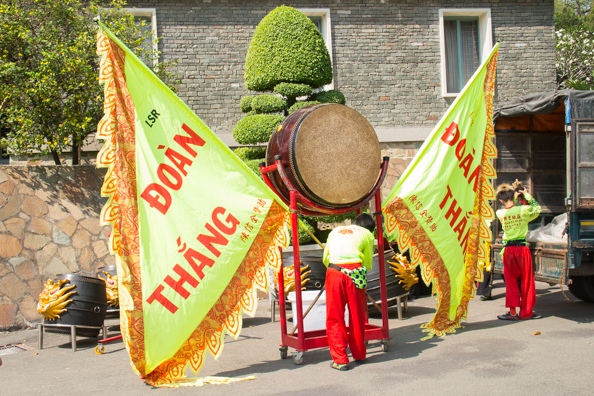 We wandered through five floors of very similar state rooms and bedrooms before descending into the tunnels below the building which still house the command centre of the war. Maps are still displayed on the walls, old-fashioned phones sit on desks of the period and a display in one of the rooms tells the story of the Vietnam War – from the point of view of the South Vietnamese. 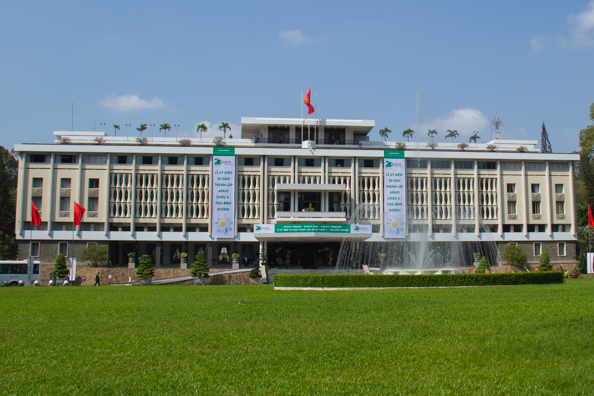 The French did not only influence the coffee in Vietnam but they also left their mark on the centre of Ho Chi Minh City (I wish they still called it Saigon). Notre Dame Cathedral, that was once called Saigon Church, is a Catholic stronghold in a largely Buddhist country. It was built by French colonists in the 1880s but only given the name Notre Dame after the statue Peaceful Notre Dame was installed in 1959. In 1962 the Vatican granted the cathedral basilica status and conferred on it the official title Saigon Notre Dame Cathedral Basilica. It was built using bricks imported from France and has two towers housing six bronze bells. A stature of the Virgin Mary stands in front of the Cathedral. It is claimed that the Italian marble sculpture shed tears in 2005. On the other side of the square is the splendid Post Office that was designed by Gustav Eiffel and looks more like a grand railway station. The interior of the building is still splendidly colonial and bustling with people engaged in traditional post office business. 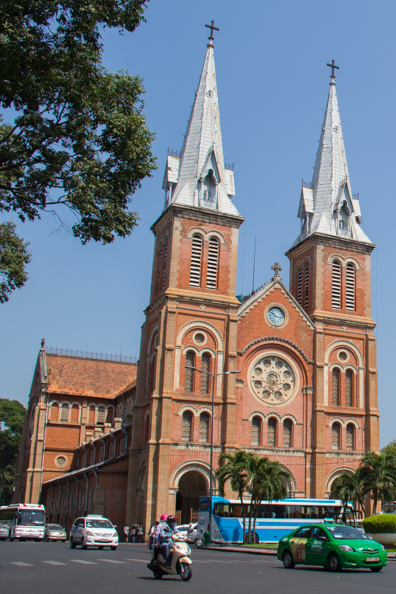 Our final visit on our tour was the War Remnants Museum, and the name describes the contents from planes parked outside to the exhibits inside. The cool air-conditioning indie was a welcome relief from the fierce heat outside and i spent more time in there than I would have done normally. My time was well spent as I learnt a lot about Agent Orange the effects of which are still evident in deformed beggars and musicians we came across on our travels. 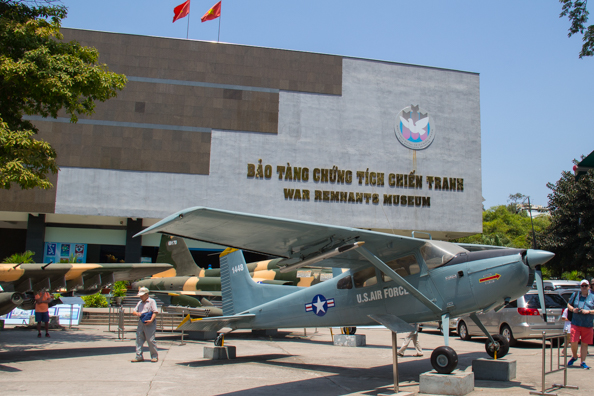 When the tour finished I see off on a mission to change my Thai Bahts into Vietnamese Dong. I had been told that Baht were accepted throughout Vietnam but I had not been able to use them anywhere. I was told I would find several jewellery stalls in the Ben Thanh Market so I made my way there. The exterior of this indoor market was a riot of colour as it is lined with flower shops and fruit and vegetable stalls. 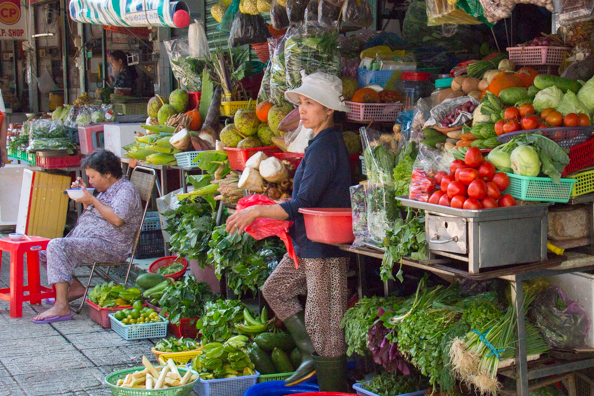 Inside the maze of alleyways are confusing until you realise that each one features a particular commodity and it was not long before I found a lane of jewellery shops. Their money changing activities were not evident so I made enquiries. the first stall only dealt in US Dollars but his neighbour was happy to exchange my Baht. Some of my notes were out of date and useless in any country. I tucked them back in my wallet – you never know they may come in useful. On my way out of the market my attention was attracted by some beautiful dragon fruits lit up by a shaft of sunlight. Its soft white interior speckled with small black seeds had featured in every meal so far – and had proved to be tasteless. From the large displays surrounding me it was clear they were now in season so there would be plenty more to come. But, like my green tea sponge, they do make a pretty picture. 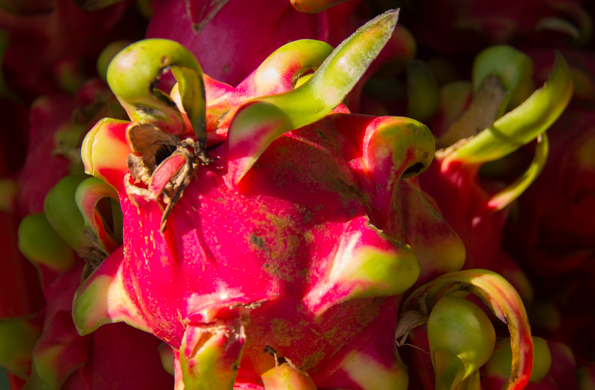 This article is now featured on GPSmyCity.  To download this article for offline reading or travel directions to the attractions highlighted in this article, go to Walking Tours in Ho Chi Minh City (Saigon) on GPSmyCity