Dodging traffic is a national sport in Vietnam especially in Ho Chi Minh City (formerly Saigon). Having spent two days perfecting the art it was a relief to board the bus and drive through the city watching how other people coped. And the best method must be the rope barrier. Two intrepid adults wove their way through a stampede of scooters rope in hand. On reaching the other side the rope was raised and crowds of school children raced through the rope-lined corridor 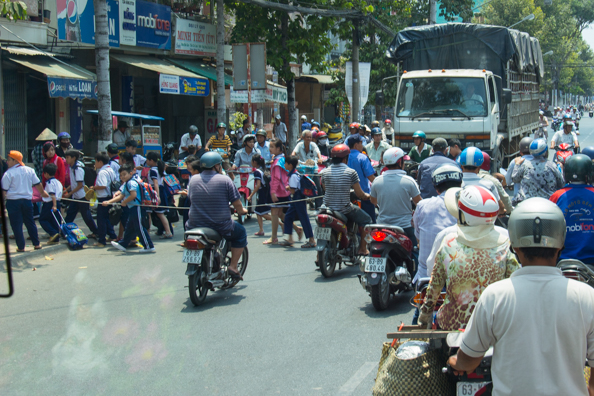 We were having a day out on the Mekong Delta, about seventy kilometres from Ho Chi Minh City where we were staying. Before we reached our destination we had a break at the Vietnamese version of a service station. It was an oasis of calm with a beautiful garden, an abundance of bathrooms, a small shop and a bakery where we could purchase freshly made filled buns. I tried one filled with a coconut paste – it was lovely, fresh and light and fluffy. 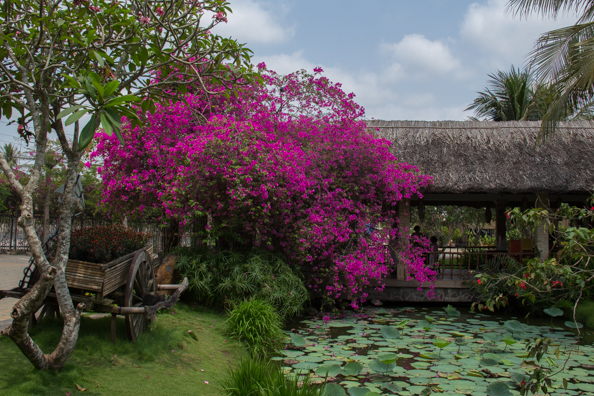 Shortly after taking a break we stopped at a beautiful pagoda, Vinh Trang Pagoda, situated in a large garden in the My Phong commune in My Tho, a town in the Tien Giang province. It is not unusual to find pagodas constructed on private property and Vinh Trang was built by Mr and Mrs Bui Cong Dat in the early nineteenth century. 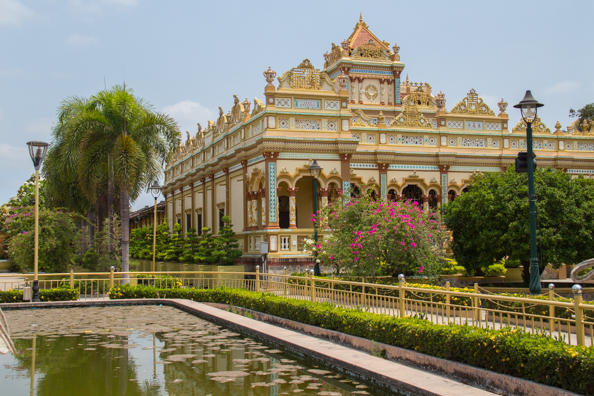 In 1849 the pagoda came under the management of a Buddhist Priest from Giac Lam Pagoda in Ho Chi Minh City. He made some changes to the structure and gave it the name Vinh Trang Pagoda. It is built in a mixture of Chinese, Vietnamese and Angkor (Cambodian) architectural styles. There are five buildings, two ornamental courtyards, nearly two hundred pillars and the graves of Buddhist priests who have taken care of the pagoda. But most impressive are the giant statues of Buddha in three different poses – sitting, lying and standing. 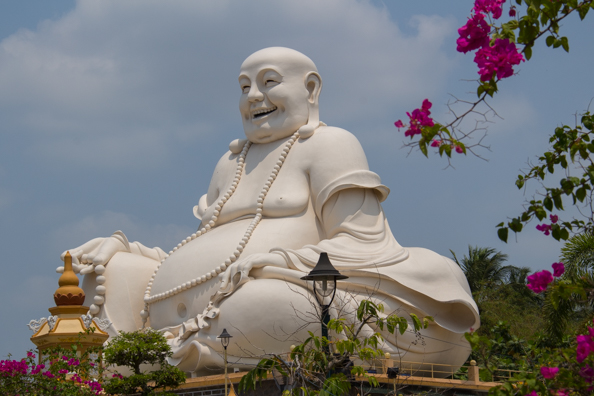 We did not stop in the town of My Tho but went directly to the bank of the Tien Giang River where boats were moored ready to take tourists on a trip through the Mekong Delta. Once on board we chugged down the wide muddy brown river lined with fishing boats on either side. Some of these boats were hung with lanterns which would be lit at night to attract the fish. 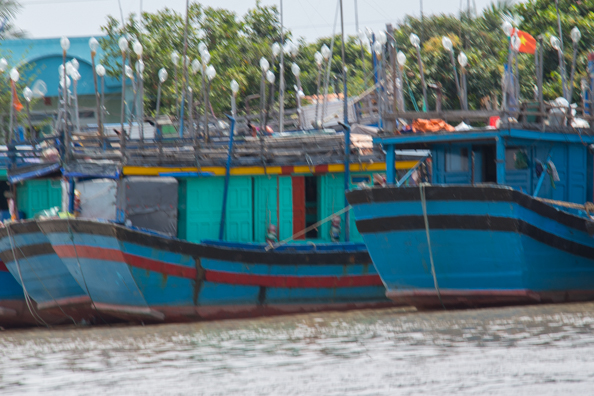 We were comfortable spread around our boat when our local guide, Thanh, passed on a command from our captain to the effect that we all had to move into the middle as we were about to turn into a narrow, shallow channel in the delta. Soon after we had obeyed his command we did a U-turn and entered a channel overhung with thick vegetation. The delta is very fertile and supports a wide variety of crops including coconuts, pineapples and other exotic fruits. 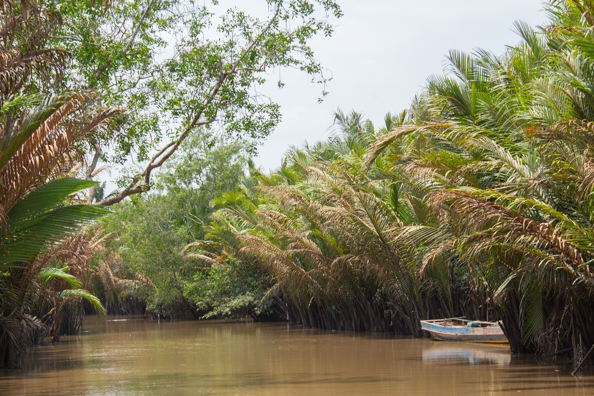 Our destination was a local workshop where handicrafts and coconut sweets were made. After disembarking we followed a narrow path towards the workshop and this took us through an art studio where the artist was at work. Admiration for his work was universal and in particular for the portrayal of a Vietnamese transporting goods by balancing a pole over his shoulder – it was sold in an instant. 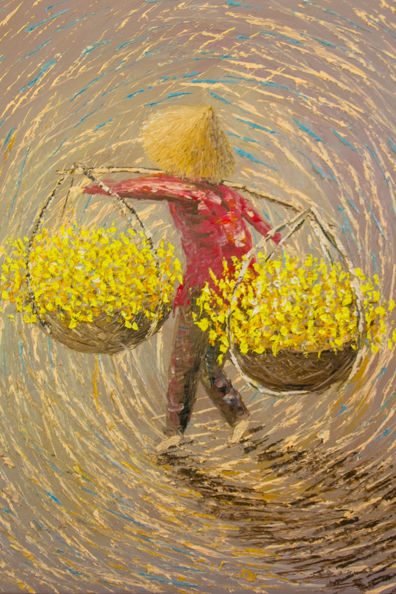 On our way to the workshop we passed an enclosure full of crocodiles being reared to sell for their meat and skin. We watched the production of the sweets and accepted an invitation to both the sweets and the coconut ice-lollies. After sampling some exotic fruits, drinking the local tea sweetened with honey (delicious) and listening to some local musicians and singers performing traditional songs we were on our way again. But not before the inevitable invitation to visit the shop. 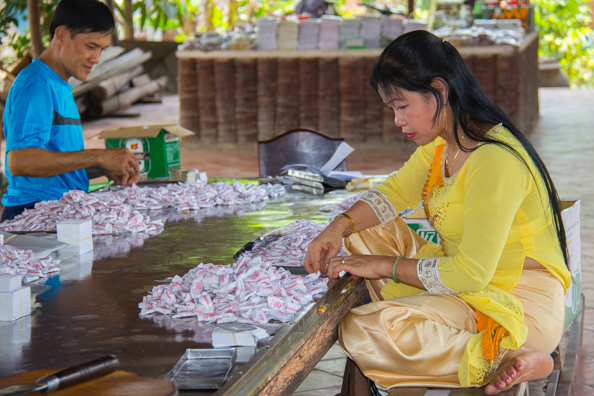 A short walk through the small-holding brought us out onto a road where some pony traps were waiting to take us to our next stop, a jetty on another channel through the delta. Soon after we arrived at this jetty sampans began arriving ready to take us down another narrow channel to join our boat on the river. As we were rowed downstream our boats were rocked by the wash from other sampans racing back down the channel to collect more tourists – using their outboard motors! 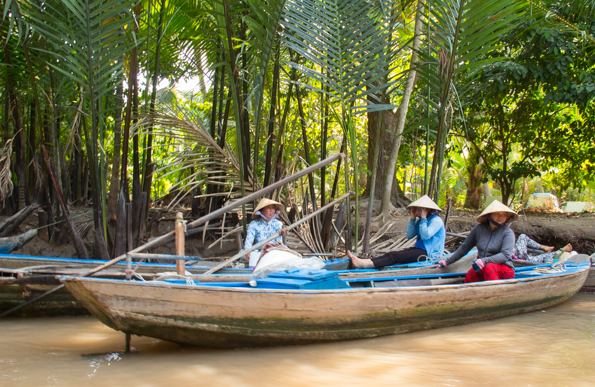 Back on board our original boat we travelled a short distance to our lunch venue, the Mientay River Side Restaurant http://www.mientayriverside.com where the dish of the day was Elephant Ear fish. The whole fish was placed on the table before being taken away to be cut up and laid on green leaves that were rolled up and then wrapped in rice paper. These parcels were then dipped in a fish sauce before being eaten. It was very pleasant sitting on a verandah over-looking the river on one side and a beautiful garden on the other. 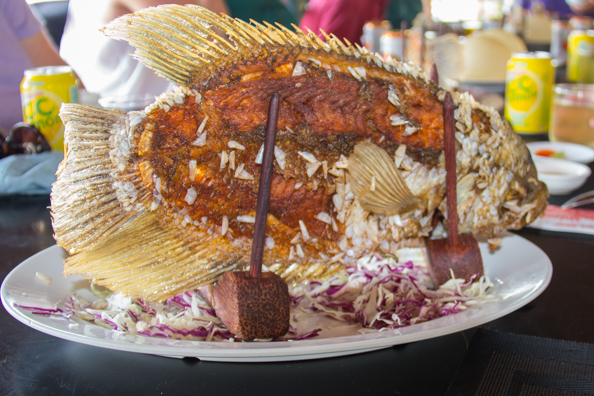 As we made our way back down the Tien Giang River the sun had come out and its rippling waters sparkled under and impressive suspension bridge that spans it and known locally as the Anzac bridge. This bridge has earned its name as it was made possible by aid from Australia and resembles the Anzac Bridge in Sydney. It was a stark contrast to our wanderings through the delta streams earlier that day and a vision of Vietnam’s future. 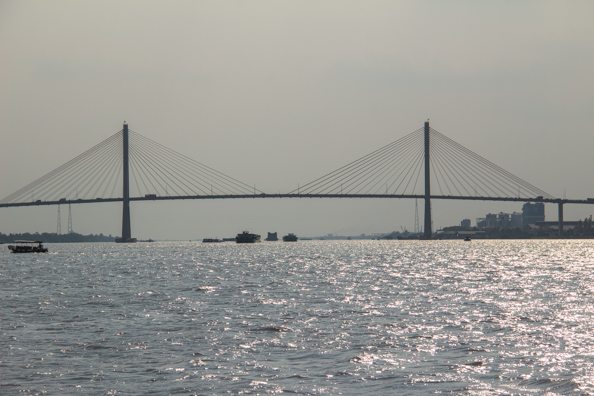