Sometimes a highlight of a trip can be a really simple event. And that was certainly true of my early morning visit to a malga in Madonna di Campigli a mountain resort in the Trentino region of Northern Italy. A malga is a summer farm in the alpine meadows of the Dolomites in northern Italy. They are opened up in the summer months to house large herds of dairy cows that graze the lush grass surrounding them. Their bells clanging melodiously through the pure thin air. 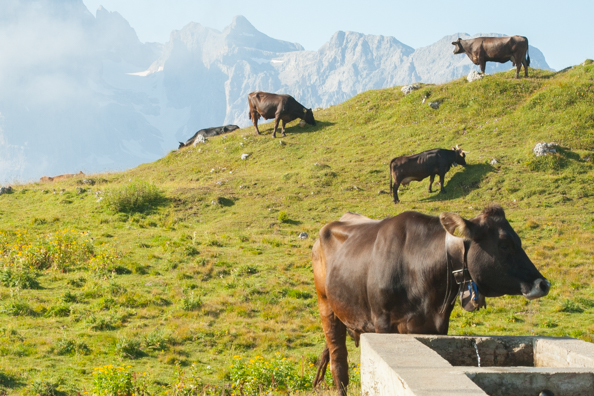 Each evening they are rounded up and taken back to their barns to be milked. Early the next morning the milk is processed to make butter and cheese using both modern and traditional methods. Some of the malagas are also restaurants and have shops selling their own produce. They offer visitors to the area the chance to visit in the early morning, for a small fee, to watch the cheese being made using traditional methods. We chose to visit Malga Mondifrà in Madonna di Campiglio in Trentino, Italy as we could walk there from our hotel, Hotel Lorenzetti. And it was lovely walking through the woods enjoying the cool air and the magnificent scenery that surrounded us. 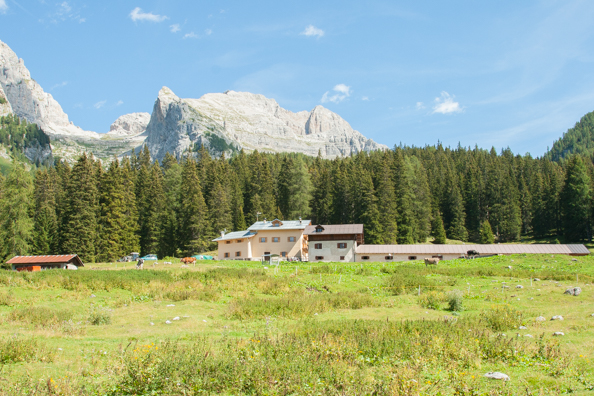 When we reached the manga we were ushered into the large farm kitchen to watch the farmer making some cheese. The curds (the part of milk that can be coagulated) and whey (the watery part of the milk) had already been separated the whey had been used to make ricotta cheese a few hours earlier. The curds are separated to make butter or the local spressa cheese. The traditional method of making the cheese involves heating the curds in a large copper pot suspended over an open fire. Once the liquid reaches the right temperature it begins to thicken and form cheese. This cheese is scooped out, fashioned into large round pats and wrapped in thin muslin cloth. These pats are then piled on top of each other in a press and left to mature. Any excess mixture is poured down a pipe which leads directly to the pig sty a few metres away in the field below the farm. Nothing goes to waste. We had to pay a small fee for this visit but the whole experience was enhanced by the provision of breakfast of fresh butter, milk, cheese, bread and local white wine. 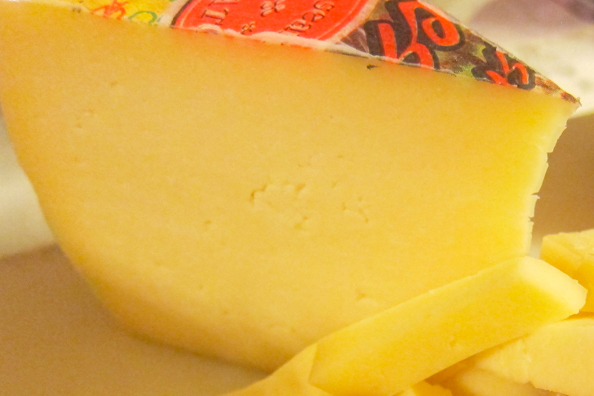 Trentino produces many fine cheeses including Assiago and one of my favourites, Fontal cheese. But perhaps the most famous outside the region is its grana known as grana Trentino. This very distinctive cheese (very similar to the more famous Parmigiano Regianno) is due to the strict guidelines that must be adhered to during the production of the milk that is used to make it. Only high quality hay and special all-grain feed combinations can be fed to the animals that produce this milk. Grana is produced by the collective diaries in Trentino. The only ingredients are cow’s milk, salt and rennet. It takes two years for this cheese to mature and when it does, it is delicious. Large blocks of grana are often included on cheese boards with an implement to scoop out pieces of cheese to eat on its own. Shavings of grana are also a regular feature of some meat dishes. 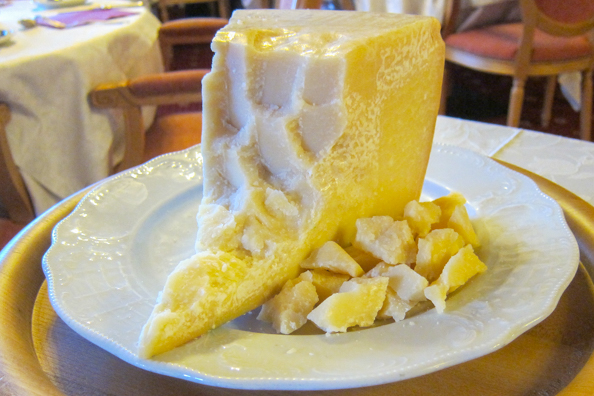 Traditionally, at the end of the summer, herds of cows were ceremoniously ‘walked’ down the roads to their winter quarters in the villages lower down the valley. Now this occasion is marked by the Festa dell’allevatore della Val Rendena in Pinzolo a small town in the Trentino. This festival celebrates the Val Rendena breed of cow a breed that has been specifically adapted to life in the mountains as these cows are not as large and heavy as other breeds. This week-long event culminates with a parade around the town that included the fifty best heifers competing for the title of cow queen. Their proud handlers adorn their charges with hats, mushrooms, flowers and other paraphernalia that indicates membership of a particular herd. These decorations are echoed in the buttonholes of their handlers. The men are dressed in black trousers, white shirts and black waistcoats while the ladies were voluminous black skirts white puffed-sleeve blouses and coloured aprons. 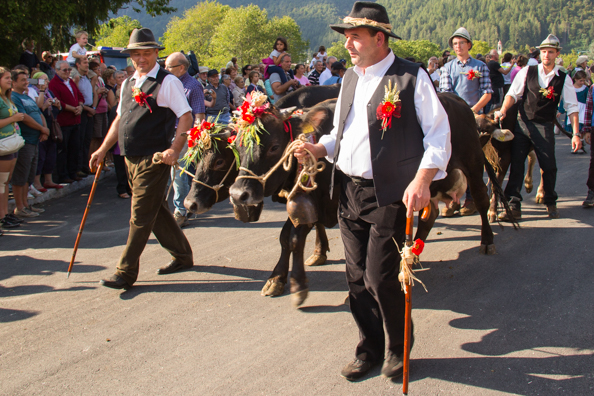 Another aspect of the Trentino cuisine that I have grown to love is the amazing variety of cold meats. Preservation of meat using a variety of techniques was essential to provide food during the long winter months in this mountainous region. Over the centuries these methods of preservation have been refined and modified and have grown into a flourishing industry whose products are exported worldwide. They are also featured on the menus of restaurants and malagas in the region. Bresaola is air-dried salted beef thinly sliced and often served with shavings of grana. This method of preserving meat goes back at least as far as the fifteenth century and it has been improved and refined over the years and today soft, thin slices of this delicate meat are a popular starter. 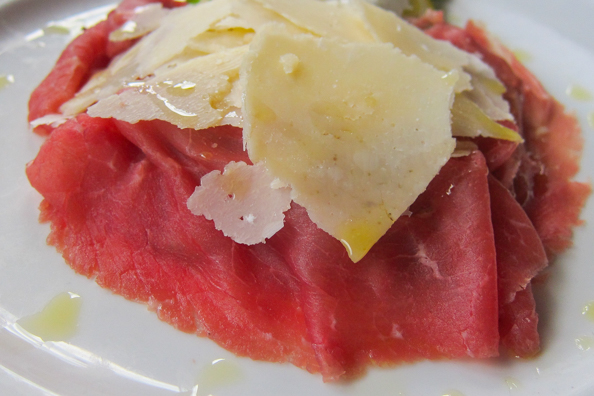 Making sausages using a mixture of preserved meat is also an ancient technique for the preservation of meat now generally referred to as salami. Salami can be made from any type of eat from donkey to wild boar and visitors to the region can tour a salami factory known as a salumificio and sample its products (for a small fee). These different varieties of cold meats are drawn together in a very popular antipasto is a dish often referred to as tagliere or slices. This platter of sliced cold meats can include as many as six different cold cuts including rendered lard or lardo. Nothing goes to waste in this region. These meats are served with pickled vegetables and make an excellent sharing platter. 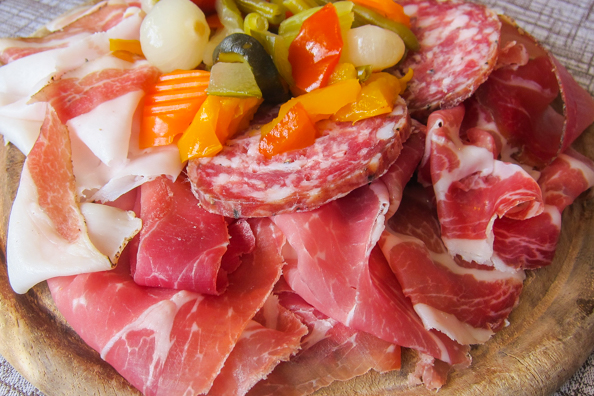 Probably the most versatile of all is a local smoked ham called speck dell’Alto Adige which is used to flavour many dishes such as canederli or bread dumplings and is often simply boiled slowly and served with gnocchi (potato dumplings). A typical breakfast buffet will feature several platters of ham, salami and speck and the latter is sometimes grilled to accompany scrambled eggs – a new tradition to please the palate of the English visitor. 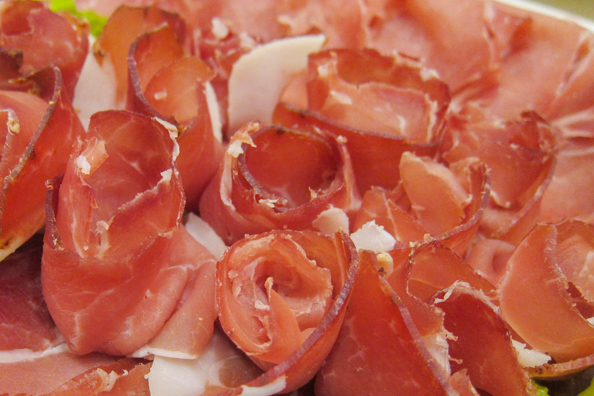