“I can’t remember how much I spent on animals but I do remember selling my Rolls Royce to buy some zebras.” A lovely comment by John Knowles, founder of Marwell Zoo in 1972 which is now the home of the biggest collection of ungulates in Europe. 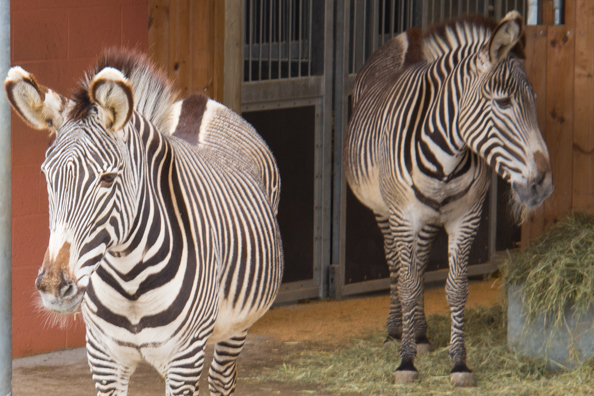 When I arrived at Marwell Zoo ten minutes before opening time at 10:00 I was surprised to see a long queue at the entrance. Regular visitors were enjoying a picnic breakfast in the warmth of their cars until the gates opened. I shrugged on my thick jacket and prepared to face the elements. It was cold but at least it was dry and I was soon warmed by the friendly greetings of the volunteers along the route welcoming us to the zoological park. I had already made the decision to walk but I could have taken either the free road train or the rail train. The sign-posing is clear and there are lots of maps to consult. 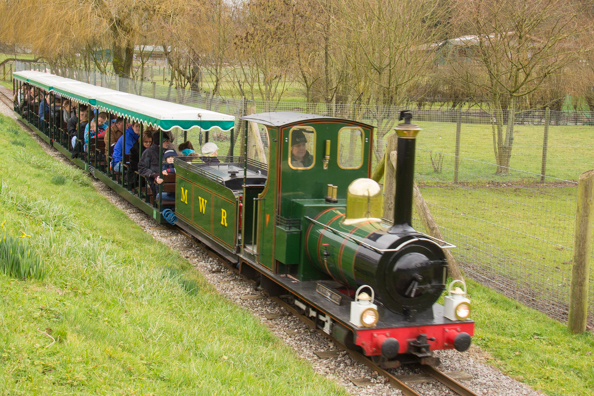 Just inside the entrance I stopped to have a chat with David and Victoria, two volunteers on duty at the Info Cabin. They were encouraging youngsters to partake in the Explorers Trail. This is a booklet featuring animals they would see in the zoo and machines to put stamps on the relevant pages. I was already aware that education was an important aspect of the zoo and this aim was reflected activities such as this and well-placed and interesting information boards. 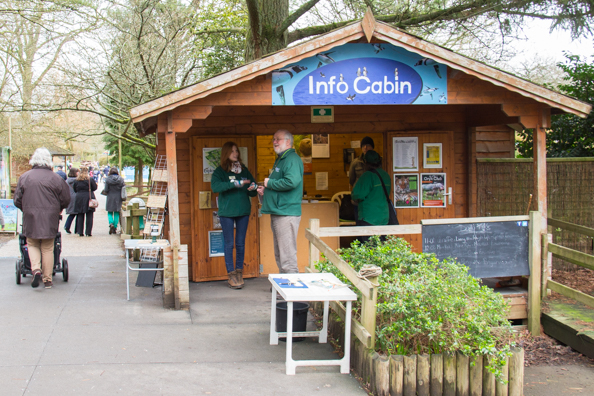 Rolling parkland spread before me and reminded me of safaris I had been on in Africa – open countryside populated by the occasional animal. I set off to explore and spotted some animals grazing in a field but I had no idea what they were. They resemble cuddly warthogs but are actually the largest rodent in the world, capybara. A sign with a picture on the fence identified them for me and another sign identified they companions – the greater rhea. After watching a flock of greater flamingos racing to and fro by their little lake I made my way up the path to the giraffe house where I spent some time watching these regal animals stretching up to munch the acacia branches suspended from pulleys and to listen to an introduction to the species by a member of the zoo staff. Regular talks take place during the day featuring different animals. It seemed the giraffes enjoyed the talk as much as the visitors as they all suddenly appeared outside their home. 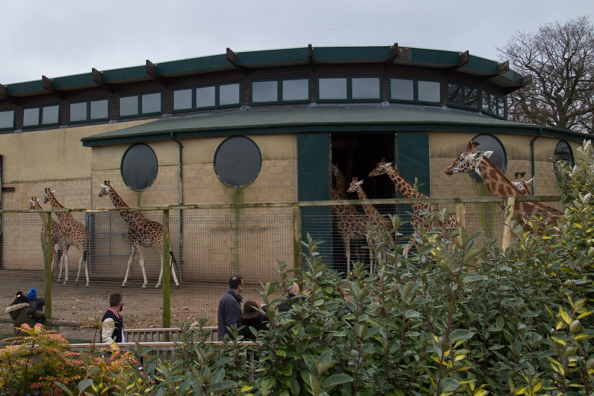 I ambled on past porcupines, monkeys, Hartmann’s mountain zebra before I was attracted by exited chatter by the amur leopard enclosure – a leopard was on the prowl! I raced across, camera at the ready and was able to get some good shots thanks to the well-placed Perspex panels amongst the secure wire fencing. It was exciting and I felt as though I was on safari, on foot, waiting for the animals to show themselves should they chose to do so. Marwell helps to protect Amur Leopards – a census carried out in February 2000 found only 27 of them left in the wild. 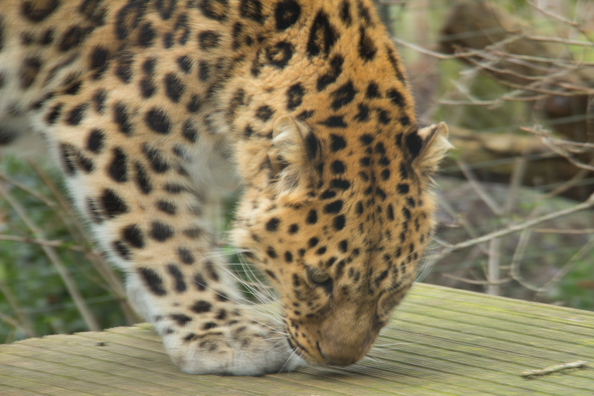 Wild explorers’ is the newest and biggest exhibit and it is home to the scimitar-horned oryx, white rhino and Grevy’s zebra. Apart from one lone zebra outside all the other occupants were curled up snugly inside. I could just see the heads of two white rhino in one section of the building – a tantalising glimpse of this imposing animal. The scimitar-horned oryx was one of the first species kept at Marwell and more than 200 calves have been born and reared there since 1972 when the zoo was founded by John Knowles. It was one of the first in Europe to focus on animal conservation. Within a few years it became an important breeding centre for several endangered species. 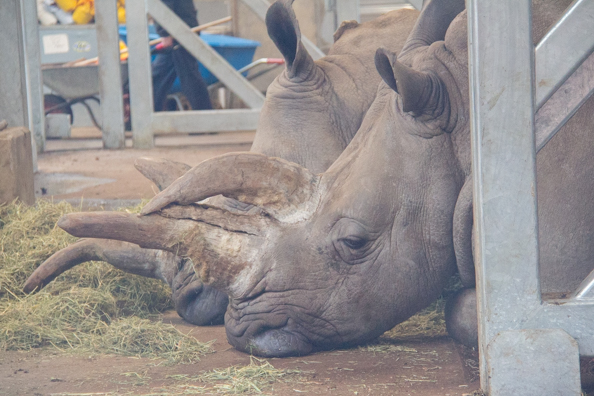 Strolling round the perimeter of a paddock trying to capture a good shot of a lone okapi I also had some good views of Marwell Hall, the Grade I listed building at the centre of the park and purchased by John Knowles when he needed to find a home for the animals he had already purchased, namely a pair of Siberian tigers that were soon to be released from quarantine. This splendid old building was once the residence of Sir Henry Seymour, the brother of Jane Seymour, Henry VIII’s third wife. The hall is now owned by the Marwell Zimbabwe Trust which was established in 1997 as a non-profit making wildlife conservation and research organisation. It is available to hire for events and conferences. It is also a venue for ghost hunts and its most famous ghost an unfortunate bride who, on the eve of her wedding, was locked in a trunk while playing hide-and-seek with her guests. 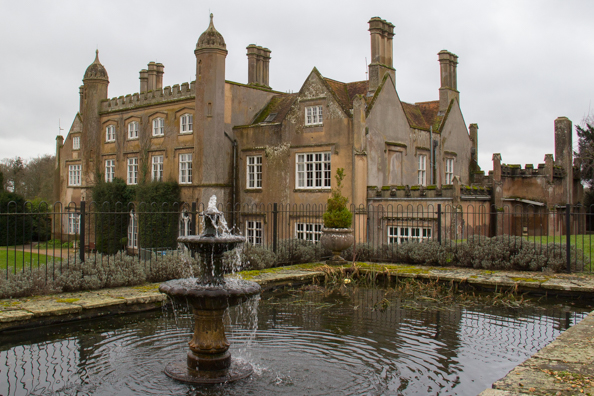 By the lawns at the back of the hall are some enclosures housing several varieties of tamarin including the cute cotton-top and the critically endangered golden lion-headed tamarin. I lingered to watch a keeper feeding them which reminded me that it was lunchtime. 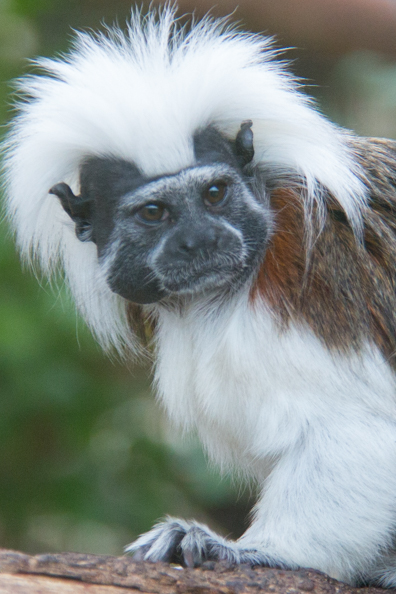 There was so much to see that I did not want to stop for long and was pleased to find a snack stop with tables and benches where I could have a quick bite to eat and a hot drink before exploring further. I was admiring the landscaping around the river where the oriental small-clawed otters live when the occupants came out to play and frolicked in and out of the water for a while before vanishing again behind some thick reeds. 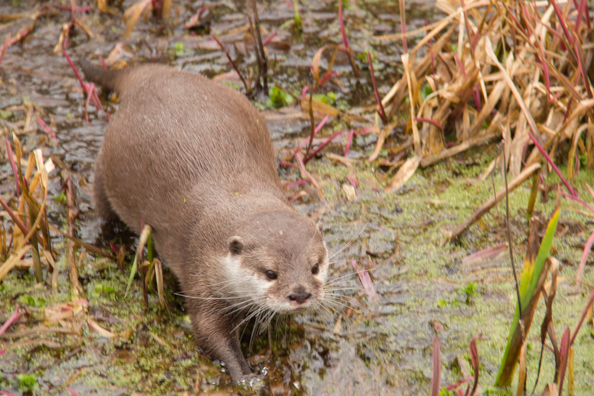 The World of Lemur is a fascinating and well-laid out complex of linked cages and enclosures. Visitors can watch the lemurs gambolling in their separate gardens from the viewing areas furnished with benches. I was amazed by the variety of these long-tailed creatures and the versatility of this appendage which they wrapped around themselves and each other like scarves. 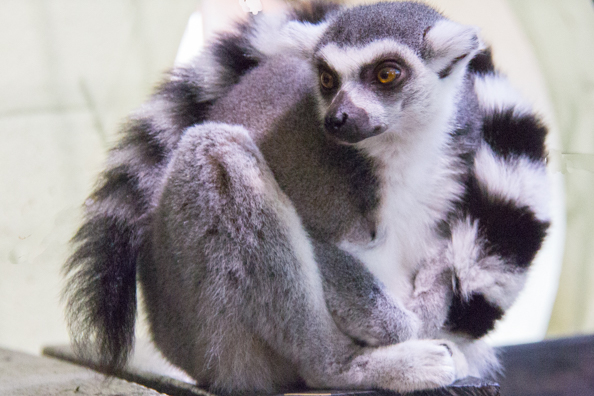 I spent a lot of time watching meerkats – I found three colonies – as they burrowed in the sand and climbed trees, all the time taking up their famous look-out stance. One of these groups was positioned close to some yellow mongooses and it appeared there was some name calling going on between the two groups. 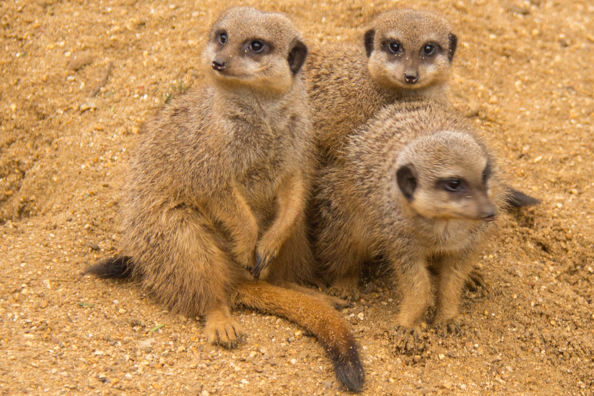 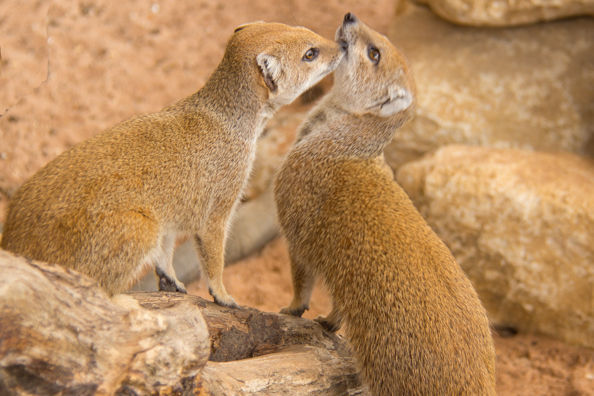 As vans gather around animals on safari so visitors to Marwell gather to view its most popular residents and can be seen from a distance due to the undulating nature of the landscape. When I heard some strange moaning noises and saw crowds around the snow leopard’s enclosure I raced up there and was rewarded by the sight of this beautiful animal pacing up and down – no doubt anticipating the arrival of her dinner. 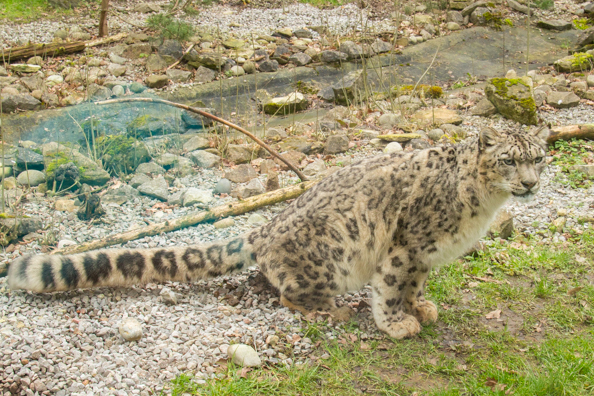 When I turned to leave I spotted three white rhinos in the distance outside the Wild Explorers building and raced back up the the hill – I could have done with a small jeep! It was worth the effort as two adults and a baby were running around the paddock – a great photo opportunity. 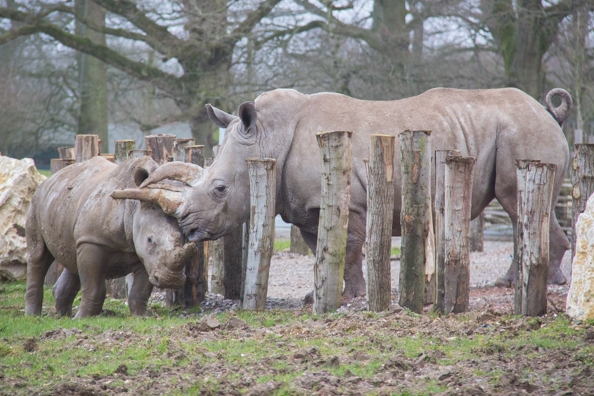 It really was time to be making my way out of the park as it was not long until it closed but I could not resist a last look at the amur tigers. I have been lucky enough to see tigers in the wild but their diminishing numbers is making this a rare treat but at places like Marwell it is still possible to appreciate their magnificence. 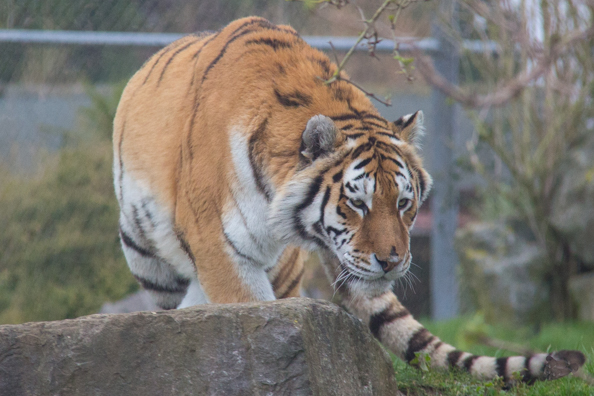 Just as it seemed getting to the entrance before the park closed was going to be a race against time the road train appeared on its last circuit and I was able to ride back to the entrance. It had been an interesting and informative day and a chance to practice my wildlife photography – with some interesting results. At least Gilbert, the Zany Zebra, stayed still for me to take his photo. I will be looking out for him and his zany friends on a public art trail around Southampton this summer where they will be raising funds for the zoo. Such a worthwhile cause and such a happy legacy thanks to John Knowles who should have the final word “I was convinced then, and I still am today, that many animals have no future. Therefore, it was vital to create a zoo that would keep species going.” 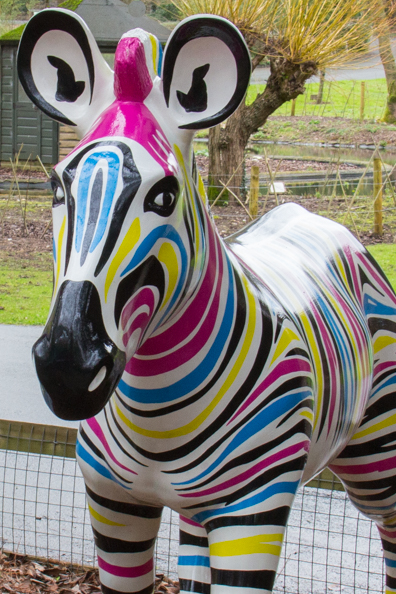