Lost Luggage - How I Coped and What I Learnt

I was thrilled at the prospect of eight weeks travelling through India – a mixture of work and leisure. After two weeks, when I took my first group of tourists to Delhi airport I changed my routine. Because I was staying in India I did not, as usual, separate my hold luggage and hand luggage (essentials) but instead I pushed everything into my holdall. It was an action I was to regret for the next five weeks because, after it was loaded onto our bus, I never saw that holdall again. 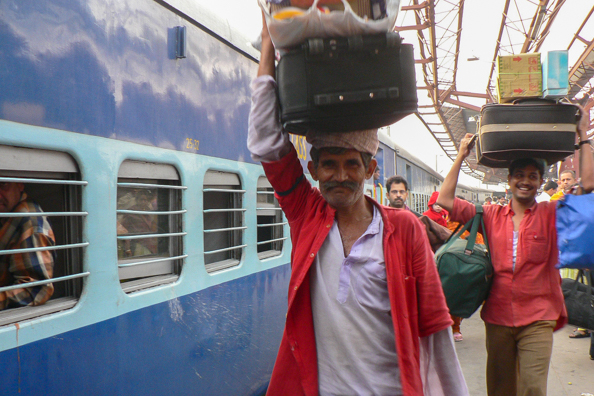 Delhi airport was the usual mixture of crowds, chaos and confusion but as we had a driver, a driver’s assistant and a local escort unloading the luggage at the back of the bus I was free to assist passengers gathering their belongings inside the bus. But when I arrived at the back of the bus I was confronted with an ominously empty tarmac. When I asked our escort where he had put my holdall an alarmed expression flashed across his face before he composed himself and assured me someone in the group must have taken it. It was a vain hope he was to cling to for another eight hours (he had been instructed by the tour operator to look after me). I pointed out that if someone had taken the wrong bag there would still have been a bag by the bus fell on deaf ears. He raced after the group. As I was waiting for the escort to emerge from the terminal building (I was not allowed inside) I was approached by a khaki-uniformed policeman who was guarding the entrance. He escorted me to the Virgin check-in desk where I was told no extra bag had been found and I was marched back outside again. 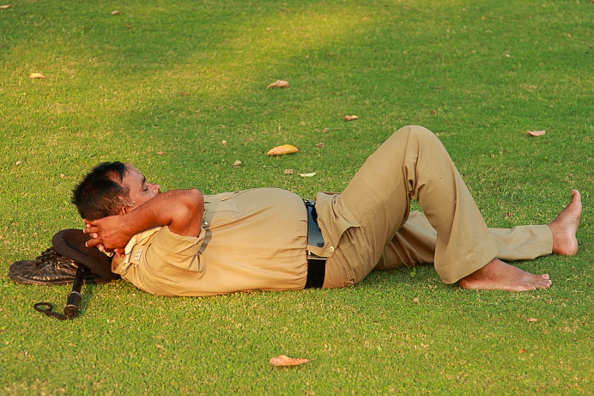 My priority now was to get a police report for an insurance claim but my escort was still insisting someone in the group must have taken my bag. The police believed his theory and I soon found myself back at the Virgin check-in desk where the ferocity of the supervisor soon had the three of us beating a retreat to the police ‘house’. In an airless reception I was instructed to write down what had happened and to list all the missing items. That was going to be difficult because the bag contained pretty much everything I had brought with me and I doubted I could remember everything but I did my best. My account was photocopied, both copies were stamped and I was given one of them. Then I was told I had to return two hours later to make an ‘official’ report. I had intended to use that time to do some shopping but heavy traffic and the sight of the Lotus temple or Bahá’í House of Worship I changed my plans and we stopped at the temple instead. 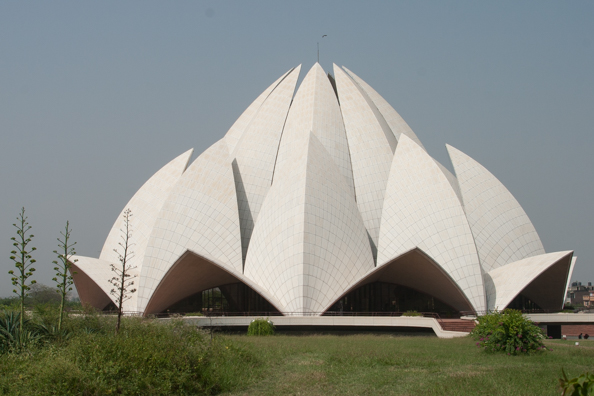 By the time we got back to the police station I had remembered some other things that had been in the holdall and I asked if I could add them to the list. The police were not impressed and gave me a hard time. I was tired, it was hot, and there was no air conditioning in the police station. One officer leant so far over the counter I felt threatened until I realised that he was actually positioning himself under the solitary ceiling fan. Questioning took a pretty brutal turn as they tried to insist I had left my bag somewhere and when I went back for it, it had gone. I persevered. I needed the report for an insurance claim. Finally, my story was accepted but I was not allowed to add anything to the original list and I had to write a new list. This second version was also deemed unacceptable as they decided that I need not give the details of items in the bag, just categories – used clothes, new clothes, cosmetics, books, computer equipment. I had to start again. By this time the police house officer was losing his patience and grabbed a sheet of paper and began dictating what I should write. Finally, my statement was approved. But it was not over yet and the report was whisked away to be typed up and my presence was required to decipher my handwriting. I longed to take over from the one-finger keyboard-bashing sergeant as the predictive text was producing some very peculiar results. We had a long discussion regarding the word ‘holdall’ that he claimed he had never heard before. Neither, it seemed, had his computer. After nearly two hours the formalities were completed, signed in triplicate, and I was free to leave. 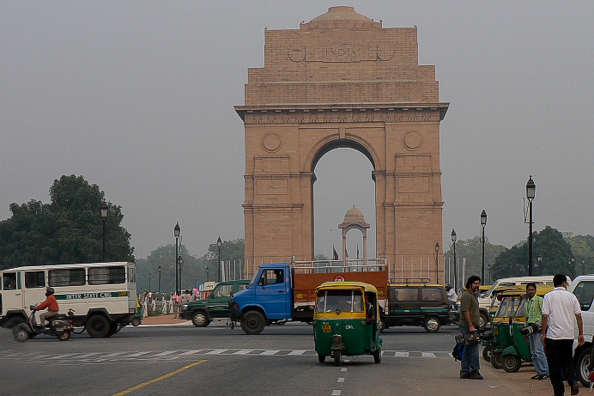 I was spending that night in Delhi and on the way to my bed and breakfast accommodation we stopped at a small chemist so I could buy some essentials. I was impressed that I was able to buy all the items I needed: an electric toothbrush, toothpaste (Colgate), dental floss, deodorant and sun cream. My choice was limited as I was flying to Goa early the next morning so I could not take any containers of more than 100 ml in my hand luggage – and all I had now was one very small piece of hand luggage. My hostess was very sympathetic and donated a huge pair of knickers to my cause. On arrival in Goa I addressed the issue of a spare set of clothes and I bought a cotton top and a nursing bra – the only bra in the local shop but it was surprisingly comfortable and incredibly cheap. 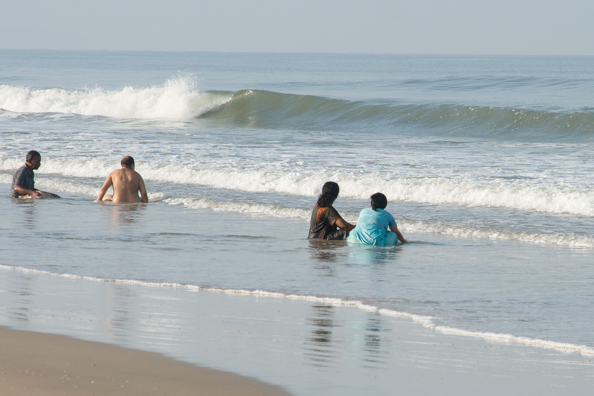 Fortunately, my camera and laptop had been in my hand luggage but my spare camera cards had been in my holdall. And I had adhered meticulously to my system of downloading my images onto my laptop at the end of every day so I had not lost the photos I had already taken. But I had not put my medication in my hand luggage so when I reached Udaipur I decided to tackle the problem of anti-malaria tablets, contact lens solution and glucosamine. My local guide, Rohit, diverted our car to the hospital area of town where the streets were lined with pharmacies. We stepped inside one of the open-fronted shop squeezing between waiting customers and busy assistants. There seemed to be an equal number of both. I let Rohit do all the talking and watched while the crammed shelves that stretched from the floor to the ceiling were ransacked by the three assistants with the aid of step ladders to reach the very top tiers. Books were consulted, doses agreed and tablets were counted out. The bill, when it was finally totalled, was more than I could afford so I discarded most of the glucosamine tablets which reduced the total by ninety percent and we continued our tour of Udaipur. During this tour we had a ‘chance’ meeting with a colleague of Rohit’s who owned a textile place. ‘Shop’ would hardly describe this complex of shopping areas linked by narrow staircases. We had followed him there through a jumble of cramped passageways and I felt as though I was being taken to a secret hideaway. I had told Rohit that I was desperate for a pair of trousers to match my one evening top that I had purchased in Goa. After rifling through large piles of every colour imaginable, we found a ready-made pair of silk trousers that I purchased at a bargain price. I resisted the temptation of the beautiful pashminas and would have loved to have had time to linger among the fabulous textiles and order some outfits to be made for me, but there was no time as I was leaving the next morning – and also there was no space in my small suitcase. 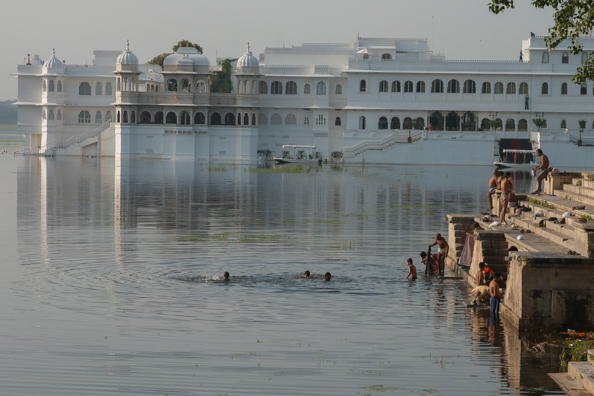 I soon got into a routine of washing my clothes as soon as I arrived in each new destination. Washing them was easy but drying them was a bit more complicated. I speeded up the drying process by rolling the wet garments up in a towel and then squeezing out the excess water before started the drying process with a hair dryer. If there was one. When I stayed at Shahpura Bagh I was given a room on the roof of the family home so I could drape my wet clothes on some chairs outside. I soon learned to weigh everything down after a frantic session chasing clothes around the roof top – but it was a good opportunity to enjoy the views of the surrounding countryside. I discovered an air conditioning unit blowing out hot air on the balcony outside my room at the Laxmi Vilas Palace and an old fashioned wooden clothes dryer in the bathroom. So that was easy – I hung the clothes on the dryer and placed it by air conditioning unit. I could enjoy my visit to the Bharatpur Bird Sanctuary in the Keoladeo National Park and watch the celebrations for Dussehra knowing that my washing would be dry by the time I got back – I had washed every item I was not wearing that day.

My personal tour ended in Delhi and chance to acquire a few more clothes and a suitcase to put them in. It was surprisingly difficult, and very expensive to find a suitcase robust enough to survive the flight back to England but eventually I succeeded and had enough money left over to add one more outfit to my wardrobe. My insurance claim would not be settled until I got home and an interim payment was not possible despite my emailing the insurance company to file the claim and obtain a claim number.

So What did I Learn from this Experience?

Check all my insurance policies before travelling – on this occasion I discovered that the limit on valuables such as spectacles, sun glasses and computer peripherals was so low I would have been seriously out of pocket but I was advised some items may be covered by my house contents policy – and they were.
Never trust anyone else to look after any of your luggage at busy venues
Make a list of everything I take with me on a trip. This also acts as a check that I have packed everything I need. I am still discovering things that were in the holdall that I had forgotten I had with me and therefore never included them in my claim. After this experience I set up a template for packing which I print out and then adapt for each trip.
I always pack essentials in my hand luggage and to ensure I keep these together I have several small bags in which I store these items all the time, for example, battery chargers, camera cards, and adaptors are kept in one bag, computer peripheries in another and these go straight into my hand luggage.
I use my full allowance regarding hand luggage now so I always have some spare clothes with me.
I know I can manage with so much less than I thought I could.