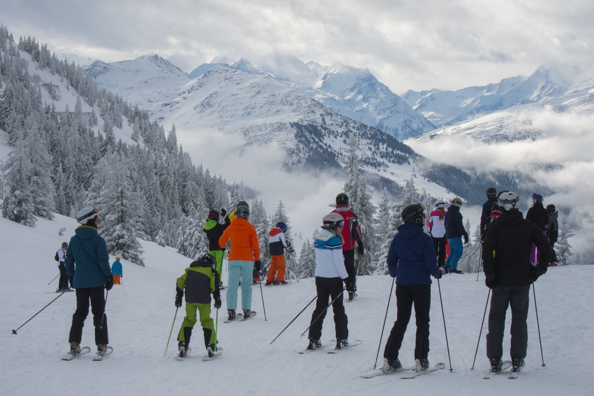 It was here that I learned that if you ski into a tree it will immediately drop all the snow on its branches on top of you. I also discovered that if you stand with your back to the downward slope to take a photo of your friends your skis will start sliding down that slope, gathering speed as they go. And the hardest lesson of all – always do what your ski instructor says. I decided not to take the chair lift down as directed but to ski down instead. I did not realise that the ski run ended on the other side of the mountain and it took me two hours to hitch hike back to my hotel. But that week it seemed that the sun always shone and the snow was always white and fluffy. It was a great experience and I ached more from laughing than I did from skiing misadventures. In Austria ski lessons last for 4 hours a day in two 2-hour blocks so after all the tuition I had not excuse for crashing out of the weekly slalom race – but I did. 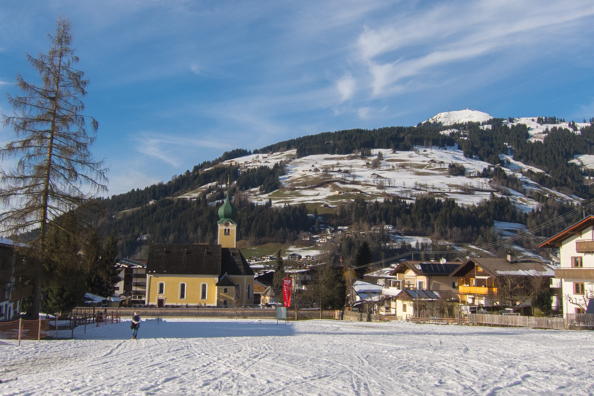 My first day out on this trip snow was swirling around me, mist was creeping across my goggles and shadowy figures would loom up in front of me and then disappear. I was wet, cold, miserable and lost. I wiped my goggles and tried to assess my situation. Somewhere I had missed a turned but I could see figures below me so took a short cut across country – this took me through a large garden and down a bank and onto a road. There was not sufficient snow on the road to ski down it so I removed my skis intending to cross the road and continue across country. I was dripping wet, cold and fed up but it seemed to be the only option other than walking down the road to the village that I sensed was way below me. 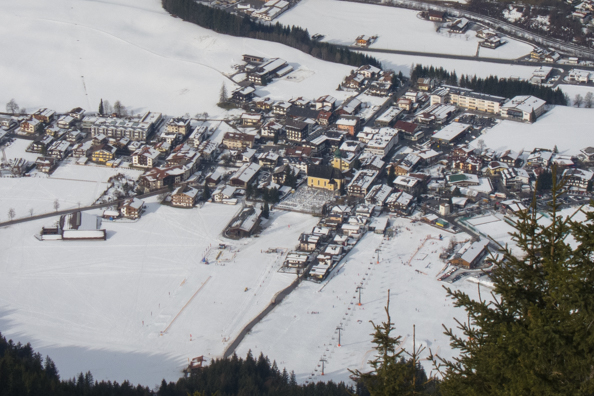 I had been here before but last time I had found my way to a busy road and it had only been a question of time. However, help was not far away and a large vehicle complete with ski-rack rounded the corner – and drove past me. Was it my dejected stance that made him reverse back and offer me a lift to the village? I will never know but he that is exactly what I did and I was soon down the mountain and wondering where to get out – the church (to give thanks) or Café Elisabeth (to eat cake). 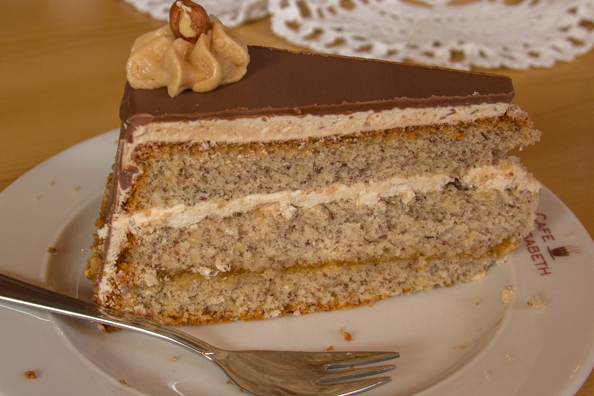 Fortunately, the weather improved the next day and so did my sense of direction and I actually found my way back to the village via the nursery slopes where I paused to watch some toddlers enjoying an unusual technique to take them to the top of the short run before having a walk around the village. 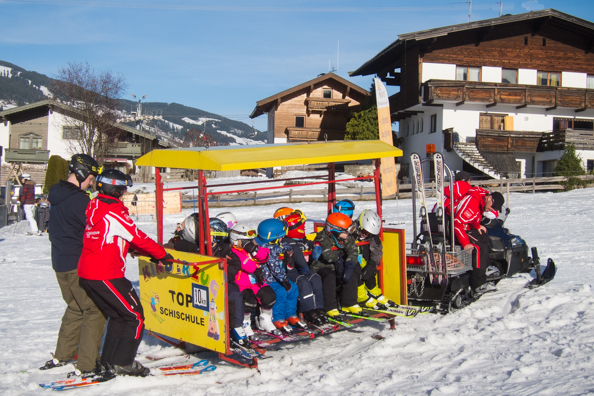 Westendorf is a typical Tyrolean village with houses, shops and hotels clustered around the very distinctive yellow parish church dedicated to Saint Nicholas. The Tyrol is a region of the eastern Alps that was inhabited by Celtic people in ancient times and it has always been cultivated. But due to its strategic position it was also an important route between Northern Europe and Southern Europe. The Romans recognised its importance as a means of promoting trade with other countries but there is no evidence of important settlements in the area. After the collapse of the Roman Empire Christianisation of the Tyrol began and the area is peppered with churches and chapels. 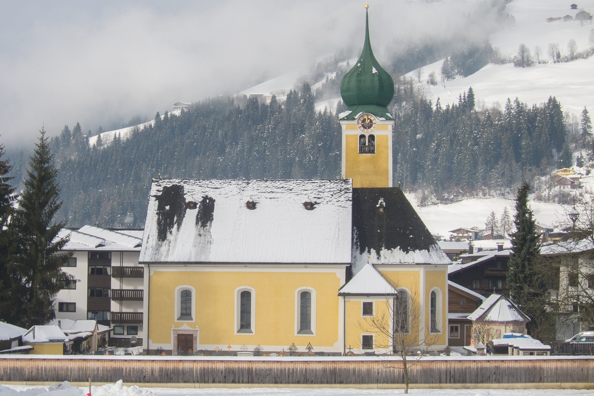 During the fifteenth and sixteenth centuries the area enjoyed a period of prosperity when it was important as a mining region but this golden age was followed by a period of conflict and peasant uprisings. From 1814 to 1919 the Tyrol was part of the Habsburg Empire and then after the First World War, in 1919, it was divided into two parts and the northern part was assigned to the Republic of Austria while the southern part became part of Italy. Since the end of the Second World War the area has enjoyed an economic revival due to its popularity as a holiday destination as the mountains are perfect for winter sports and summer walking and the pretty villages that populate the valleys offer delightful accommodation. Strolling through Westendorf I was curious about a wooden sculpture outside it church. It portrays the first four farmers in the village – Jakob, Samer, Koller and Obermannhart – and is the work of an artist from Westendorf, Christoph Unterrainer. 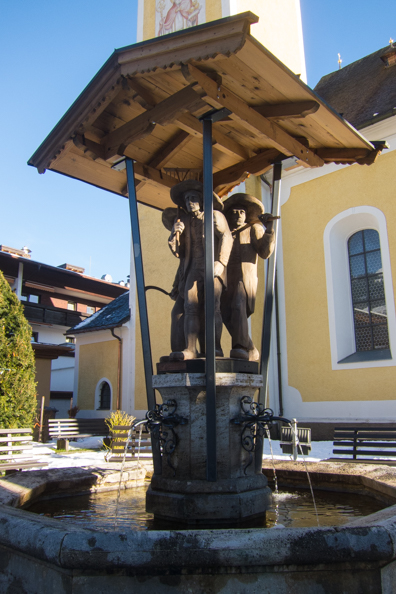 Naturally my exploration ended at the Café Elisabeth where I treated myself to an ice cream extravaganza, the Mozart Komposition, featuring the traditional Mozart chocolate. This chocolate was originally created in Salzburg, birthplace of the composer Mozart, but is now found throughout the country. 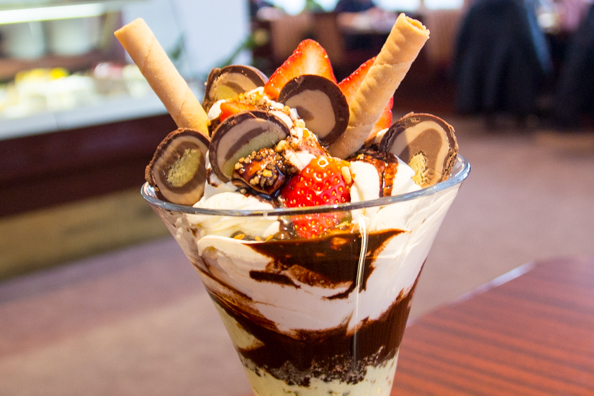 As the light faded the primal beat of music pervaded the slopes and streets of the village and I joined my companions for some lively apres ski downing a few beers and joining in the community singing. Fortunately. there are no photographic records of the occasion. But I was up early the next morning in time to record a beautiful sunrise over the fields surrounding the village before setting off to enjoy another day on the slopes. I had plenty of options regarding the route I would take as Westendorf is linked to the SkiWelt, a system of villages linked by runs and lifts and offering 257 kilometres of skiing and a good variety of mountain restaurants. 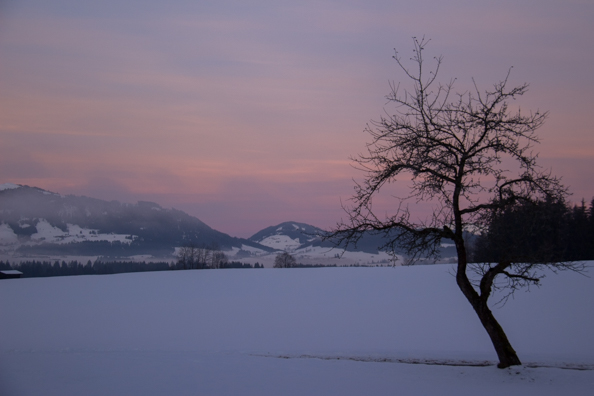 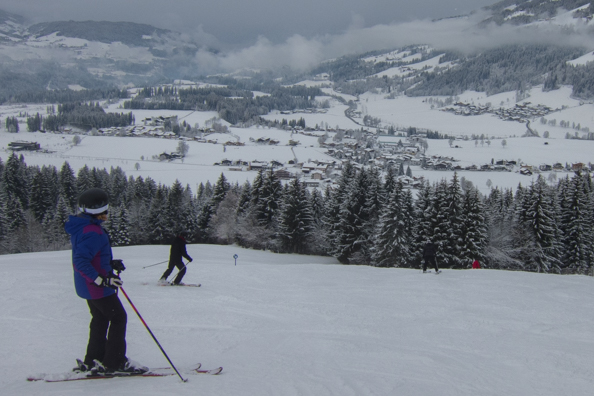