A Guide in Guatemala

Travel is not only about destinations but also about the people you meet while you are there. Here is my story about a guide I met in Guatemala who showed us around the Mayan temples there. 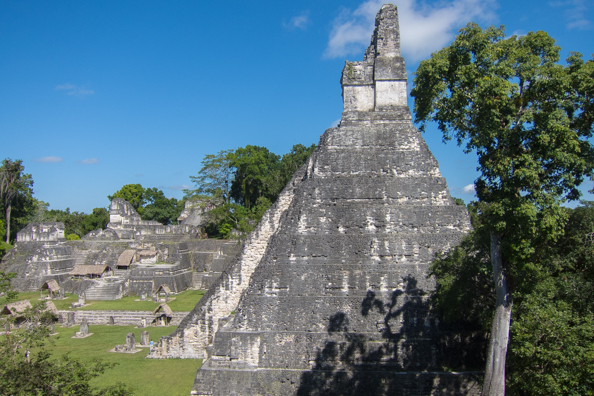 An early morning mist hung over Lake Yaxhá as our ancient but comfortable bus ground its way along the bumpy road swerving occasionally to avoid the small herds of pigs foraging in the verges. Some of my companions requested a photo stop – for a pig? Ever willing to oblige Joel, our local guide told our driver, Manuel to pull over. As cameras clicked and flashed Roel, who looked ten years younger than his twenty-four years, told us that in Guatemala pigs, ponies and donkeys were allowed to roam free during the day but they returned to their homes overnight. As we plied him with questions about life in the local villages he pointed out some young girls carrying coloured pots on their shoulders, full skirts swinging jauntily as they hurried along. They were on their way home after collecting water from the blue water barrels strategically placed on the main roads. These were re-filled regularly but if the supply ran out then the villagers had to raise enough money to pay the driver and his assistant to do an extra run. 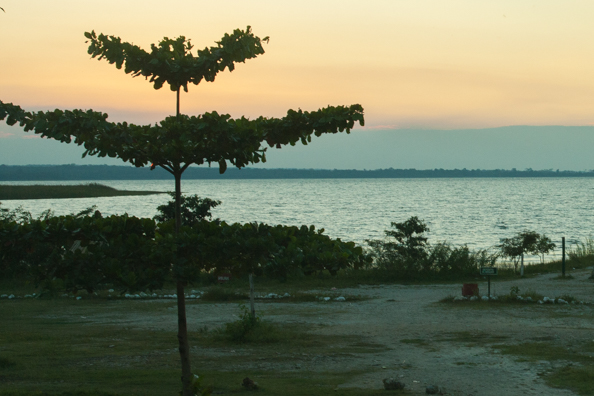 We were fascinated and, his face alight with enthusiasm, Roel reminisced that when he was a boy he had to make two trips to the local river to collect water before he could go to school. He remembered his grandfather, of Mayan descent, carrying huge weights supported by a band across his forehead. Sacks that weighed two or three times more than his slight frame. His parents wanted more for their son and were anxious that he should get a good education. Every day he had to walk for over an hour to get to school and during the rainy season, when he had to wear large, clumsy gumboots he was teased by the other children. But he persisted and as he grew older he either stayed in the village where his school was situated or he commuted on the back of his friend’s motorbike. 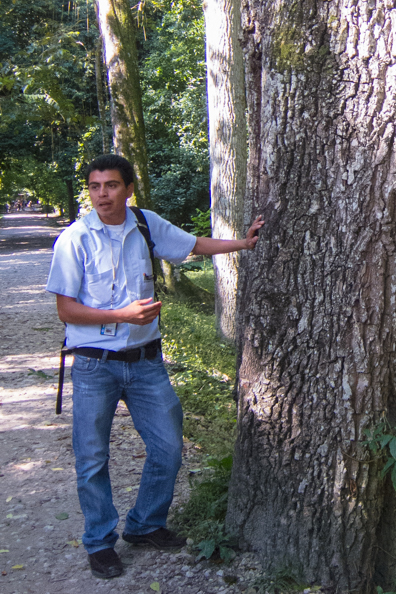 His recollections were interrupted by our arrival at the archaeological site of the Mayan city of Yaxhá. Spellbound we followed Roel around as he re-created the history of his ancestors through drawings in the dust and vivid explanations of the tumbled, moss encrusted stones around us. He explained the intricacies of the Mayan calendar and the significance of 21 December 2012 when a new era began. As we clambered up to the top of the highest temples he pointed out birds of prey and scampering monkeys in the foliage that surrounded us. We loved the combination of ancient and natural history. 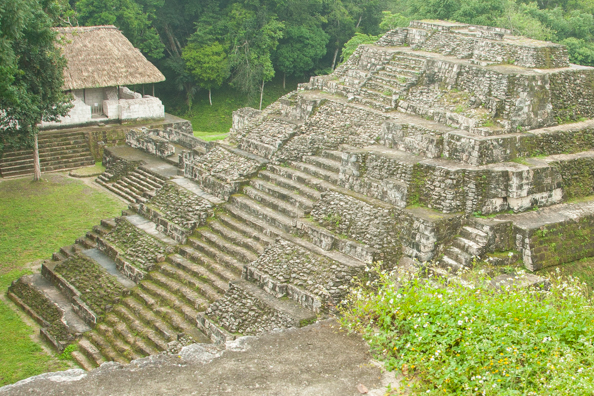 Next we boarded a boat to chug across the lake to the ancient Mayan city of Topoxté. Roel pointed out water fowl on our short journey. 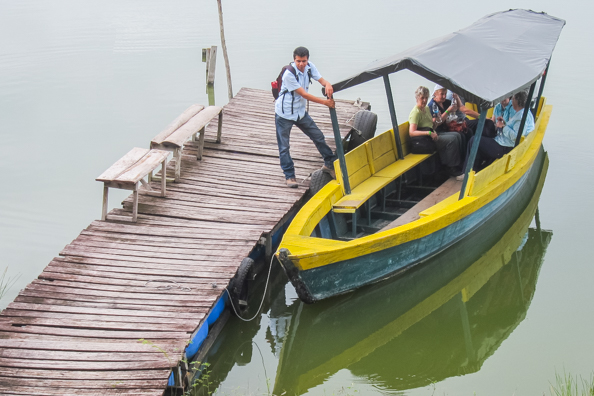 It was here, amongst the Mayan ruins, that Roel succeeded in his quest to find a tarantula and ran about enthusiastically taking photographs of us as we minced around with the hairy creature balanced on hands and hats. It was fun learning about his country so dear to his heart. 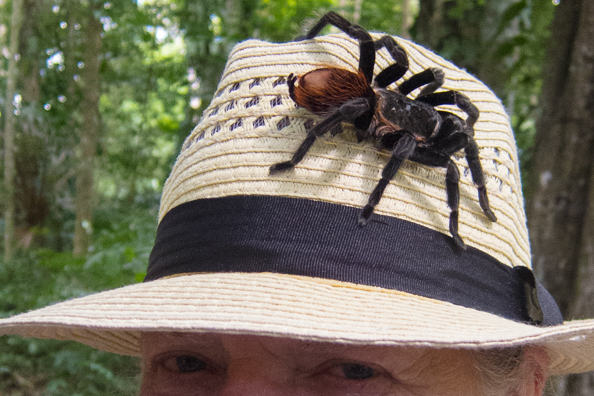 The next day we visited Tikal National Park. It was a beautiful day, the sun was shining and the sky was blue – a complete contrast to yesterday when the sky had remained an obstinate grey and the only thing lighting up our day had been Roel’s broad smile. As Roel led us through the wooded park that surrounds the temples he brought the forest to life talking about individual trees some of which were home to exquisite orchids and vantage points for inquisitive toucans. 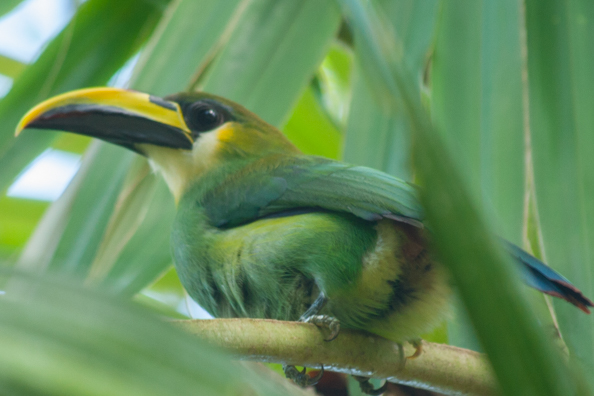 We emerged into clearings populated by the remains of magnificent temple and clambered up the steps to further appreciate the architecture of these impressive temples. 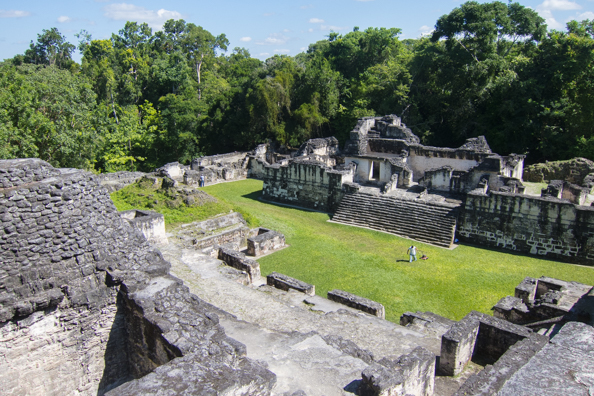 On the perimeter of the park is an adventure playground that includes zip lining. Carried away by Roel’s enthusiasm I agreed to have a go and joined my colleagues on the long climb to the top of the first of seven towers. Once there I began to have doubts about my ability to steer myself across the void in front of me without naming to a halt. I need not have worried as one of the guides suggested we do a double act – which we repeated all the way round the course. I felt like one of the monkeys watching me from the tree tops. 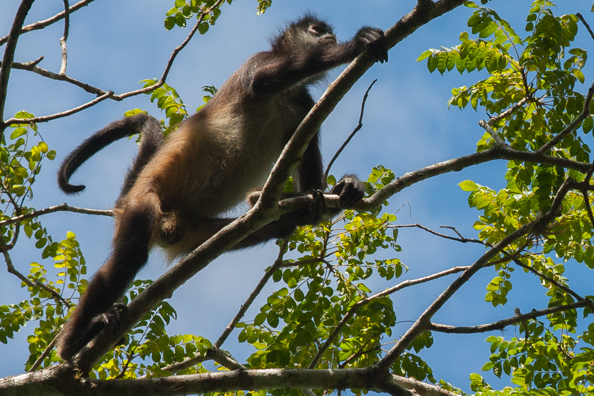 On our journey back to the hotel Roel’s enthusiasm was undiminished and his boyish face under his close cropped black hair beamed with pleasure as we plied him with questions about his own history. His slight figure encased in jeans and T-shirt moved easily up and down the narrow aisle of our bus as he chatted easily with individual members of the group. For us he became the very essence of the country he lived in. After school he had studied to become a guide. He was married and had one child. He told us that the little girl who lived next door to him was the same age as his son but half his size. Whenever she came to his house to play with his son she would eat with them enjoying more nutritional food than the three meals of beans that she generally consumed each day. As he related this story for the first time that day he was touched with sadness – maybe he was reflecting on the narrowness of his own child’s escape from the same fate. He certainly deserved to do well as he was probably the most entertaining guide I had had the pleasure of meeting – a guide who could conjure faces out of tree trunks. 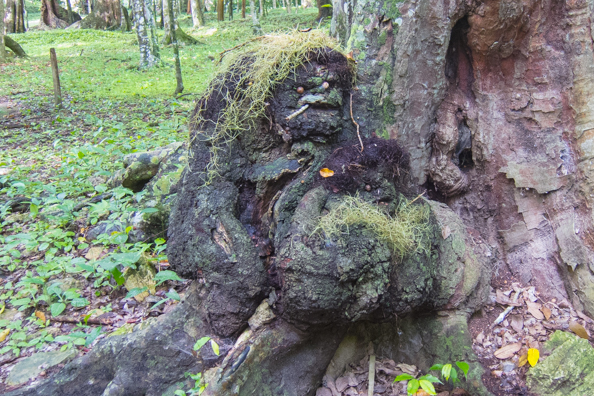