From Here to There at Twixmas in Italy

I had spent Christmas in the charming town of Dimaro in Trentino and now I was on my way to Tuscany for New Year. The first part of my journey was easy – a coach to Verona. 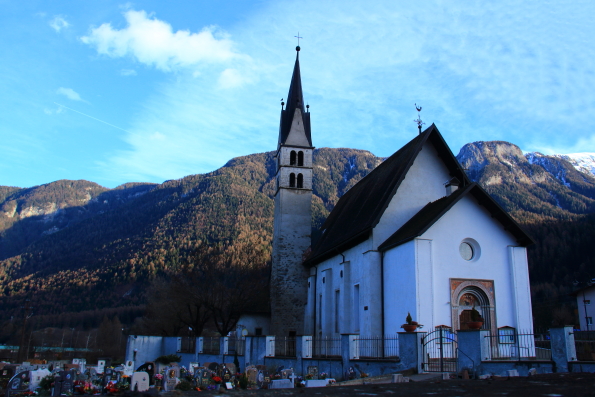 Verona station was a hive of activity and people were rushing everywhere. When I tried to buy my tickets on the self-service machine I was shocked to find that one of the trains I had selected for my journey from Verona to San Gimignano (four trains) was full and the alternative offered by the machine was much more expensive. As I was on a budget and wanted to keep within it I joined the queue for tickets and information. It was moving very slowly as every enquiry was taking a long time and shortly after I arrived two of the people working there put up the closed sign and left. I had plenty of time, or so I thought, but time was passing and the queue in front of me was not getting any shorter. Finally, it was my turn but when my journey was checked the price quoted was even higher. I always check the routes, times and prices on the Trenitalia website and then buy my ticket at the station. This time it seemed it was not going to work. I knew that there are several different railway companies operating the same routes so I asked if my route could be revised and the price lowered. By changing the proportion of express trains (expensive) and regional trains (cheap) my original budget was restored and I set off to the station bar for some refreshment clutching a bundle of tickets. I had just enough time for a hot drink and a jam-filled croissant before embarking on my journey through Trentino and into Tuscany. 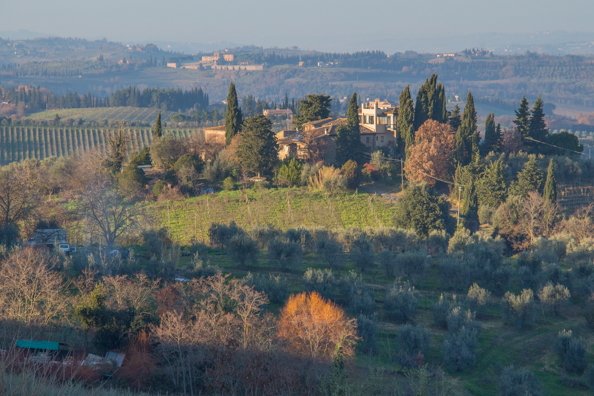 Whereas in England on Boxing Day (26 December) few people travel mainly due to a lack of public transport but in Italy the entire population seemed to have packed a large suitcase and headed for the railway station. I made my way to the platform in good time. The train was already there but so sparsely occupied that it took me a while to find a passenger who could confirm that it was the right train. Soon after I had settled myself and my luggage other passengers started to arrive and by the time the train pulled out of the station every seat was filled with people or luggage, the overhead rack was groaning with large, brightly coloured cases and a whole family had taken up residence in the space between my carriage and the next one. I was lucky as my strategically placed bags had discouraged all but one passenger and we used the empty seat between us for our belongings. It is unusual for an Italian to ask another passenger to move their belongings from an empty seat and I was not the only one to take advantage of this. I could watch the Trentino countryside rolling by in comfort. 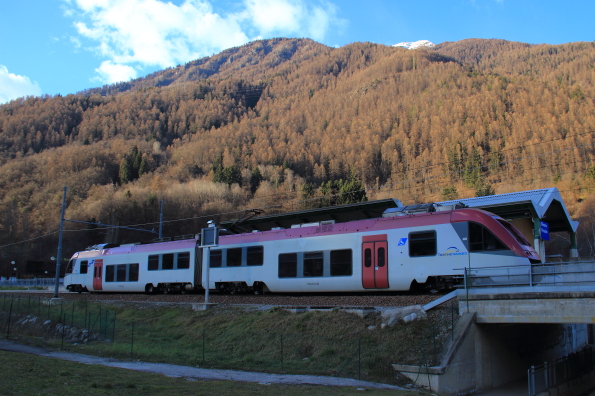 At Bologna Centrale I had to wait an hour for my connection and decided to pass the time in the large waiting room there. Despite a pervading odour of stale bodies it was warm and comfortable. The time passed quickly as I worked on my laptop and once again I was pushing my way through the crowds to my platform to catch the express train to Florence. It was a rush to get on board and the steps up into the train were a challenge for me with my short legs and two suitcases but I need not have worried because the passengers on either side of me took a suitcase each and I was soon aboard. Italians are very courteous and helpful and these small acts of kindness are not unusual. Once on board I had to find my reserved seat. It was occupied so I moved on and took the next empty seat as no-one appeared to be worried about matching the number on their ticket to the number on the seat. I was soon speeding through the beautiful Tuscan countryside. 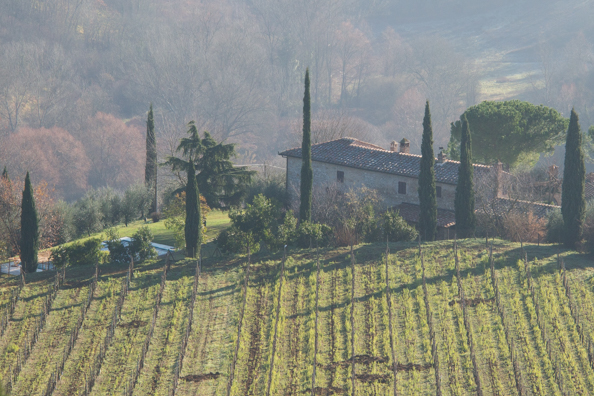 On arrival at Florence I realised I had not checked the end of the lime for my connection to Empoli but knowing the approximate direction I watched the destinations rolling by on the large departures board until I saw the name and rushed to the appropriate platform where my train was about to leave. I boarded and then realised I had not validated my ticket (an omission that can result in a heavy fine) so I had to scramble back down on to the platform and look for a machine to stamp my ticket. I found one at the end of the platform but had to wait patiently while a doting dad gave his young daughter a lesson on how to validate a train ticket. As I stood there my train slid out of the station. Mussolini heritage remains in tact as my experience of trains in Italy is that most of them run on time. I sent off to find the time of the next train. Every station in Italy has a large Departures board with is always yellow and and Arrivals board (white) which lists all the stations each train will pass through. Before I found it I spotted a uniformed railway employee with a multitude of railway company names emblazoned on his jacket. He quickly deciphered the board and directed me to the right platform. This service was much quieter and when I got off at my station it was eerily deserted. It was the only station on my journey that was operating a Sunday service as it was the day after Christmas Day and I had an hour to wait so I settled down in the cosy station bar to keep warm. It was dark by this time and the temperature had plummeted. When I emerged the platform was bustling with people heading in the same direction as me – towards Poggibonsi, the nearest station to San Gimignano. 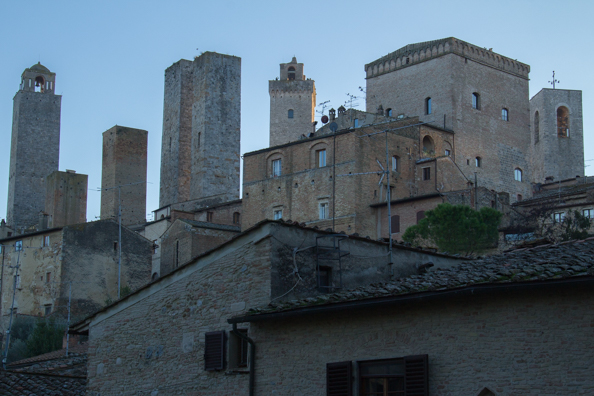 On arrival there I found a bus stop outside the station but there was no indication that this was the right bus stop. Several people were waiting by the station entrance so I crossed back over the road and asked a woman on her own where I could catch my bus. She pointed to the bus stop I had just come from and said it was due now and that she was going in the same direction. I did not have a ticket and asked her if I could buy one on board. Yes, I could but it was cheaper from the tobacconist or newspaper stand – as both were closed the cost was not an issue. Bus tickets in Italy are region specific so I could not have purchased one before I got to Tuscany and by the time I got there all the vendors of bus tickets, except the bus driver, were closed. But the bus driver had run out of tickets. When I asked if I could board the bus he said I could and that was the end of that conversation. Both he and the woman at the bus stop were able to pin point my stop when I told them the whereabouts of my bed and breakfast. 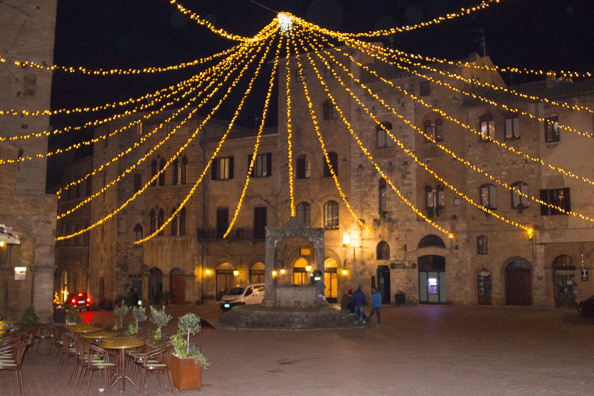 As the bus wound up the road, despite the darkness, I could see the lights of San Gimignano glowing on the hill top above us and excitement welled up inside me. I was soon dragging my cases through Porta San Giovanni, the main entrance through the walls into the medieval town. I made my way up a narrow street illuminated with arches of bright lights above me. People were strolling along admiring the old buildings and browsing the souvenir shops that lined their way. I followed the cobbled road to its summit where it entered Piazza della Cisterna. Beyond this square was Piazza Duomo. All the main buildings in this square were floodlit and one solitary sparkling Christmas tree enchanted the young children visiting with their parents. No time to linger though as I had to find my lodgings. I knew it was near this piazza so I asked several passers-by for directions and always received the same response – they did not live in the town. Eventually I found someone who did live there, an ambulance driver, and I was soon on the right street peering at door numbers. As they were not sequential it took a while to establish that number 25 came before number 21 and number 31, my bed and breakfast Le Romite, was immediately after it. 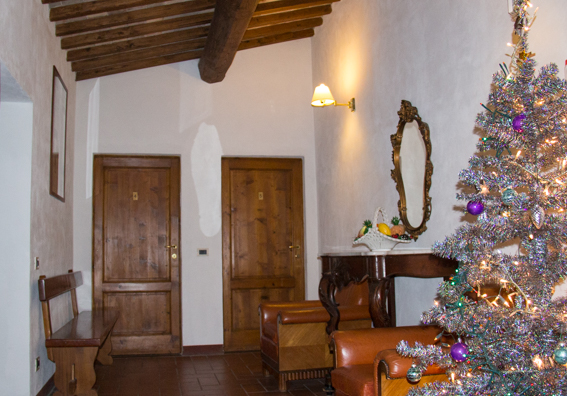 I rang the doorbell of Le Romite and a few minutes later the door scraped open and I was invited inside by a short man with flowing grey locks who resembled one of Santa’s elves. Having given me a large key for the door of my room and a Yale key for the outside door he galloped up the stairs with one of my cases and showed me where my room was and then disappeared into the nether regions of the old building. I was left to admire my room with its beamed ceiling, quaint painted wardrobe. The bathroom, a theatrical creation with black and white tiles and spotlights above the mirror seemed to have been fashioned out of a narrow corridor. I was looking forward to seeing the exterior in the daylight. 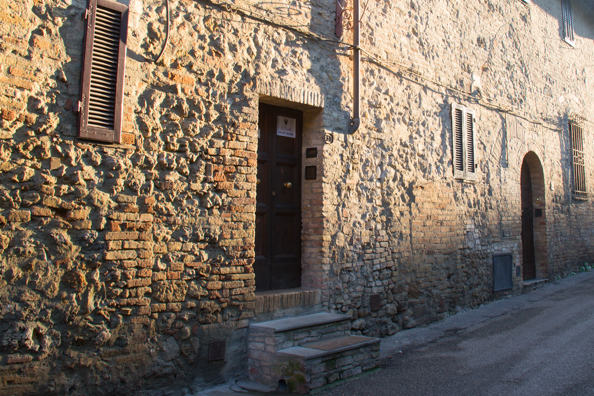