As I entered Machu Picchu through the Sun Gate one sunny afternoon tears sprang to my eyes. These tears had nothing to do with the privations I had endured under canvas on the way there – my first experience of camping. At least I was familiar with trekking having trekked across the Himalayas two years earlier – but on that occasion we had stayed in lodges. These lodges did have electricity whereas this was a luxury our tents did not boast and it was not long before I was wishing I had invested in the very expensive head torch instead of trying to make do with a cheap torch from the local market that was slightly too big to hold comfortably in my mouth when a task required both hands. However, I had splashed out on an insulated sleeping bag to keep me warm while I spent the next four nights under canvas in the foothills of the Andes in Peru. 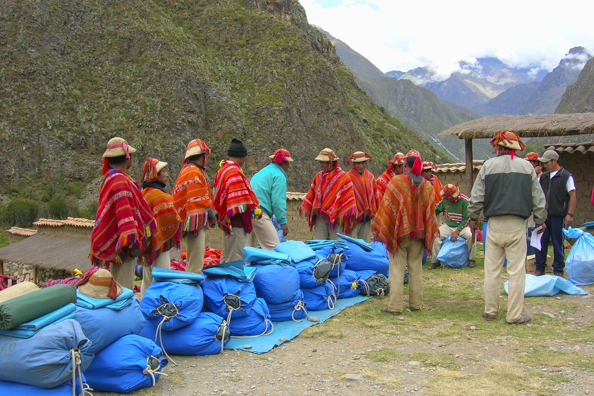 Before setting off we made a final visit to the local market in Ollantaytambo where we worked our way through a list of recommended items provided by our Peruvian guide when we had our briefing in Cusco where we had stayed for two days acclimatizing to the altitude. As I had already hired some walking poles my only purchase was a plentiful supply of coca candy to combat the effects of altitude. I had been experiencing a slight headache which I had been treating with coca tea which was available in the reception area of our hotel and which seemed to be doing the trick. I resisted the temptation to buy one of the bright, woven water bottle carriers that were proving very popular with my companions as my shining new rucksack had more pockets than I could cope with and at least two of them could take a small water bottle. I had been relieved to discover that our porters would be regularly supplying us with purified water along the route so we did not have to carry enough for the whole day. I had long harboured a desire to visit the famous ruins of Machu Picchu but I felt walking there was a bit over the top when there was a perfectly good train service but the buzz and excitement that swirled around us like an early morning mist was an experience I would not have missed for anything. 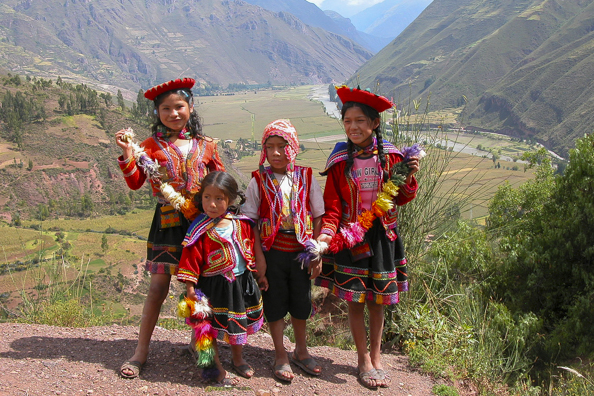 A convoy of vehicles made its way to the starting point where the porters and guides were waiting and soon the ground was littered with kit bags which were generally known as duffles. These were subject to a strict limit of ten kilos and we had been issued with scales to ensure compliance. Even so many had failed to pass the final weigh in and the excess baggage was now on board our bus that was heading back to Cusco. We did not walk far before it was time for lunch in a local restaurant – a very leisurely affair as we did not have far to walk to our first campsite. Our porters were sent ahead while we were eating so when we reached our first camp site our tents had already been pitched and the kettles were boiling for afternoon tea. After settling in we made our way to the dining tent where we had to wash our hands before being allowed to enter. Dinner was excellent and after the meal, for want of anything else to do, we had a serious conversation regarding the use of the toilets – should we allocate one to the men and one to the ladies? And then we had to decide which should be which. There were two tents and each one contained two toilets – a pink one for number one and a second, without a lid, for number two. Chemicals had to be sprinkled on top of the latter after use and all used toilet paper had to be put in the plastic bag on the ground. It was certainly a new experience sitting on one toilet looking at other people’s offerings and working out when to switch to the other one. As I walked back to my tent I looked up. The sky was just amazing, so clear and sprinkled with stars including the Southern Cross. I was prepared for sleepless nights and had brought my MP3 so I could listen to music but it proved unnecessary as I soon fell asleep – it had been a long day. 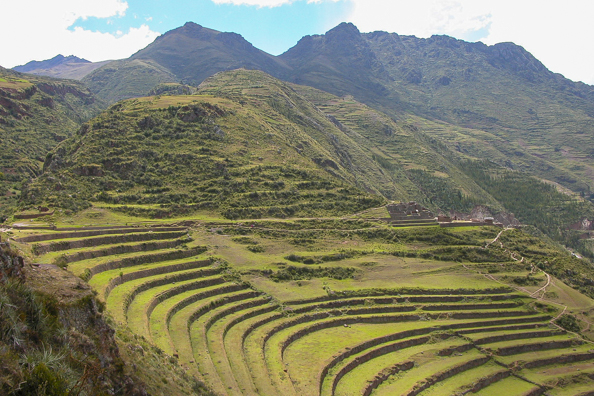 The next day was the longest and hardest section of the Inca trail – a five hour uphill trek to the top of Dead Woman’s Pass at 4,200m so altitude was likely to be an issue. We had three guides, Faustina who was the leader and her two assistants. They were spread out amongst the group and set a steady pace that was within everyone’s capabilities. We had a break for lunch, in our private dining tent, before we started the final steep ascent to the pass that towered above us. It is a good path and en route we saw some beautiful flowers with giant humming birds hovering around their blooms. The views were incredible and occasionally included evidence of Inca settlements and temples. As the permanent back marker I had time to enjoy my surroundings and take a few photos – before the rain set in and we had to gallop down the steep descent to our camp-site at Phuyopatamarka where our tents were already pitched on the hillside and aromas of cooking food were floating around them. 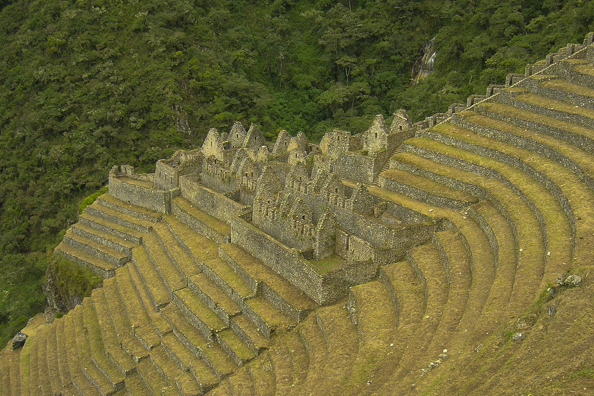 After another tasty meal we all retired to our tents where I was almost lulled to sleep by the soothing rush of the stream nearby. I was relaxed and beginning to enjoy camping. But as I was settling down for a good night’s sleep I heard one of my companions shouting for help. She needed the toilet, quickly, and could not remember where it was. I was in my nightdress and had just removed one contact lens. So I told her to cross the bridge and I would catch her up. I flung on some warm clothes and then burst out of my tent. In my rush I had fallen against the flap while fumbling with the zip and it split open. This was bad news as it was a freezing cold night and now one side of my ‘door’ was open to the elements. There were two layers to this door, a mosquito net that was completely closed while the outer layer was left partially open at the top to prevent condensation. By the time I was back in my tent it was raining steadily and large damp patch had appeared around the battered entrance. Faustina had warned us that the tents were not waterproof and touching the walls would cause water to soak into the fabric. Now I had to move everything to the far side of the tent and hope I did not slide back down to the affected area. I decided to use my duffle to anchor my mattress but it was not very heavy as I was wearing nearly all the clothes I had with me to keep warm. Fortunately it was sufficiently heavy to slow my progress back down the tent and I soon fell asleep to the rhythm of rain pounding the canvas surrounding me. 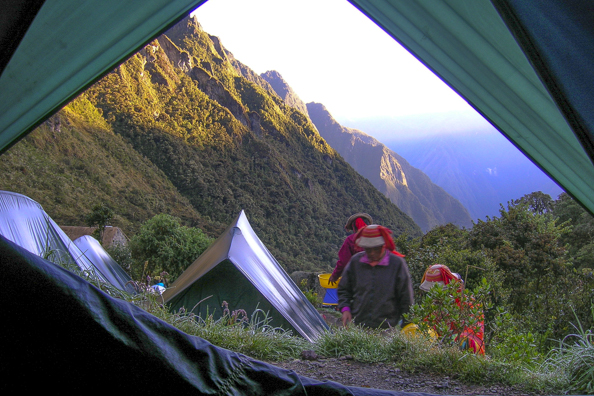 I was awake before my early call – a cup of tea and a bowl of water to wash in – arrived and enjoying a fabulous view of the mountains glowing under the rising sun. As I dawdled over my ablutions crawling around on the uneven floor of my tent a ten-minute warning was shouted – ten minutes to finish packing and present ourselves and our duffles outside the dining tent where we would be having our daily cooked breakfast. It was a stunning walk that day, particularly the latter part which took us along the original Inca trail overlooking a stunning panorama and lined with an amazing variety of flowers, plants and trees. Reynardo, one of the deputy guides was a keen photographer and he dropped back to point out good vantage points to get the best images. 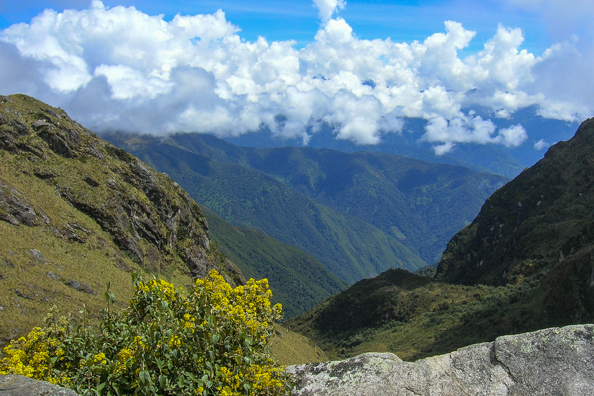 We had a very early start on our final day of trekking as most of us walked up to the top of the peak near our camp site to watch the sun rise. As we watched the golden globe appear over the horizon our porters served us tea and biscuits. It was a memorable experience and we lingered as long as we dared before racing back down for breakfast. After we had eaten Faustina organised a farewell ceremony as our porters and assistant guides were going ahead and we would not meet up with them again. First the porters and guides gathered together and sang us a song. We felt we should respond but the only song we could come up with was ‘When you walk through a storm’. It did seem appropriate as we were hoping for a golden sky when we reached our goal that day. 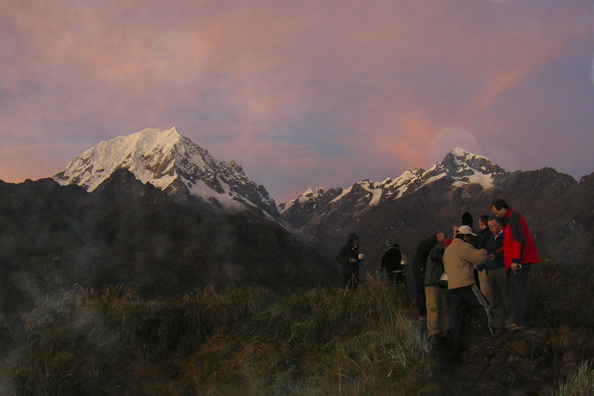 As we approached the Sun Gate late that afternoon and most of the group set off at a trot. I hung back aware of my role as back marker but Reynaldo took over and encouraged me to go ahead on my own. It was not long before two pillars on either side of an opening came into view. I stepped between the pillars and looked down. Below me was Machu Picchu, the Incas greatest creation. The grey stone of the ruins glistened in the sun – illuminated by shafts of sunlight. Tears sprang to my eyes as I drank in this splendid sight – an image that would be forever stored in my mind. 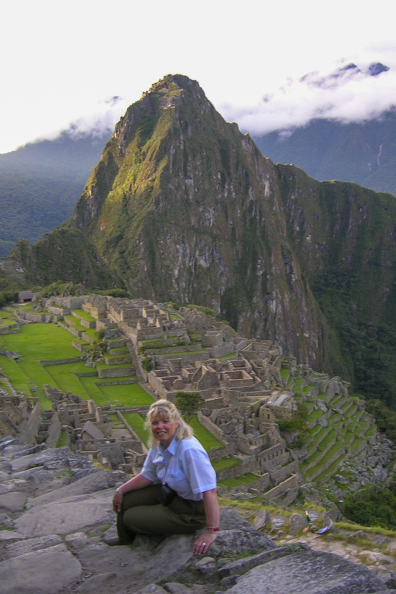 It was the best time of day to explore the ruins as all the visitors had left and we had the place to ourselves until it was time to board the last bus to Machu Picchu Town where our tents had already been pitched for one last night. Before walking to our camp site on the outskirts of the town we had a celebratory dinner and a few beers to celebrate the end of our trek. We returned to the ruins early the next morning for a guided tour. For this second visit the ruins were bathed in sunshine and it was a glorious sight but it still could not match that first glimpse through the Sun Gate that was just visible far above me. 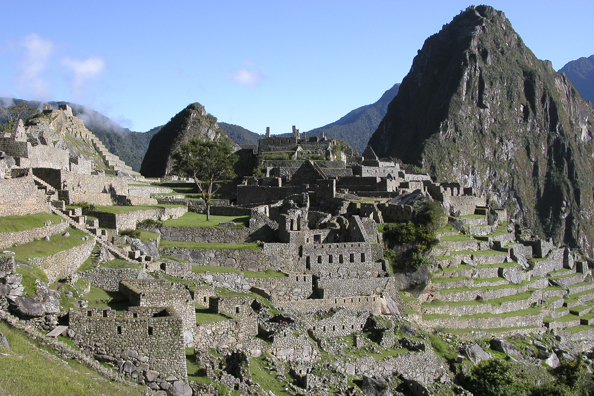