Florence is truly a treasure trove of sights to see and things to do and I always leave this beautiful city with a list of things I still have not done. On my last visit I had five new experiences. The first, and most exciting, was staying in a city centre hotel, Albergo Firenze just one street away from Piazza Duomo. On my way back to the hotel each day I would stop in the piazza and watch the Duomo glow in the late afternoon sun. 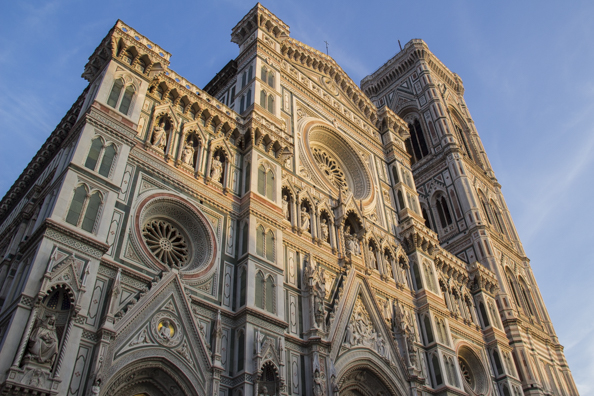 The hotel was in a small courtyard, Piazza Donati which had some historical significance as one could see how a medieval tower had been incorporated into the surrounding buildings. When Florence became a free city in 13th Century and a republic was founded it was decreed that all towers (hitherto an indication of wealth) had to be cropped to signify that the age of clans and civil wars was over. 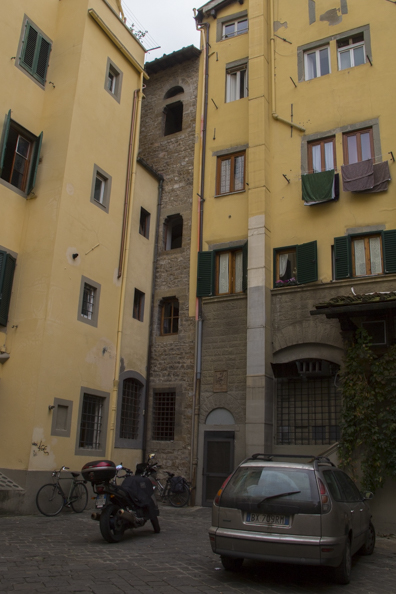 My second experience was a visit to the Uffizi Gallery, to my shame I had never achieved on countless visits to the city. My excuse for such an omission was that I had never been able to find my way in. I had found the entrance for groups and an entrance for advance bookings but not an entrance for that particular day. It was only by chance that I found it this time when a colleague remarked that no-one was queueing to get in as we passed by. I doubled back as soon as I could and found that the ticket booth for that day was behind the one for advance bookings. As it was a weekday in November the small galleries (over 90 of them) were relatively empty and it was a pleasure strolling around admiring the paintings and sculptures on display. The venue, the old offices of the Medici family, was also impressive. 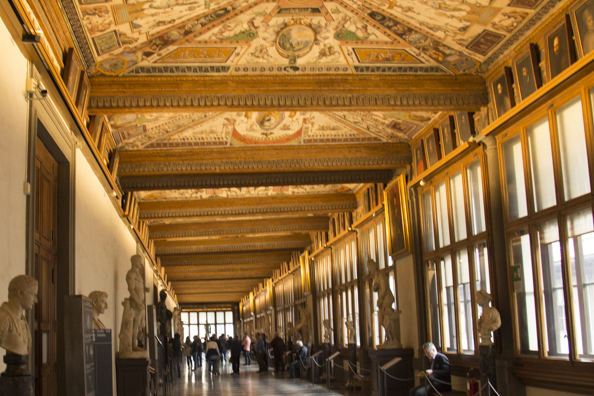 The view from the Uffizi was also interesting as I was able to see a large portion of the Vasari Corridor built by Giorgio Vasari so the Medici could walk from their home, Palazzo Pitti. to their offices in the Uffizi and their seat of government in the Palazzo Vecchio without having to go outside 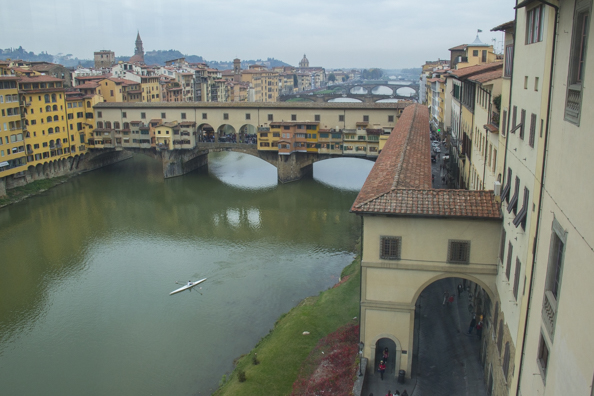 Since my last visit to Florence a new museum, Opera del Duomo, has opened behind the Duomo and this was my third ‘new’ experience. The museum is included in the composite ticket that covers all the buildings in Piazza Duomo. This fascinating museum documents the history of the construction of the Duomo and in particular its relatively new elaborate façade and a model illustrating the technique Filippo Brunelleschi used to construct the dome, once the largest in Europe. 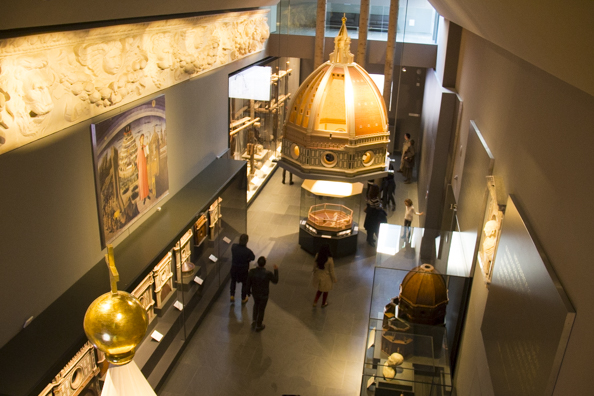 The exhibits are beautifully displayed and include part of the original façade as well as the original sculpture the Florentine Pietà (the Deposition of Christ) by Michaelangelo. After working on this piece for 8 years Michelangelo tried to destroy it in a fit of frustration and it was subsequently restored by another sculptor, Francesco Bandini. 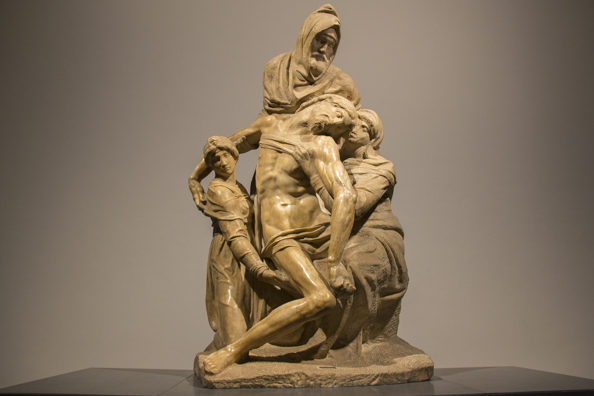 When I was enjoying the Boboli gardens on my last visit to Florence I had noticed a sign to the Bardini Gardens but I did not have time to explore them. On this visit I made the time and notched up my fourth new experience. These lovely gardens creep down the same hill that is home to the Palazzo Pitti and included in the ticket for the Palazzo gardens, the Boboli gardens. The history of this garden began in the late sixteenth century when the Mozzi family acquired a palazzo with a walled garden and a steep terraced slope just outside the city walls. The garden remained in the family for 300 years and was enlarged by the addition of the villa Manadora (now the Villa Bardini) which included some woodland with an English-Chinese garden, a waterfall, a pond and a fountain. Then the family were forced to give up the garden and it passed from one family to another and was finally abandoned in 1965. In 2000 the Fondazione Parchi Monumentali Bardini Peyron began the restoration of the garden and five years later it was opened to the public. The views from this garden of the city below are magnificent. 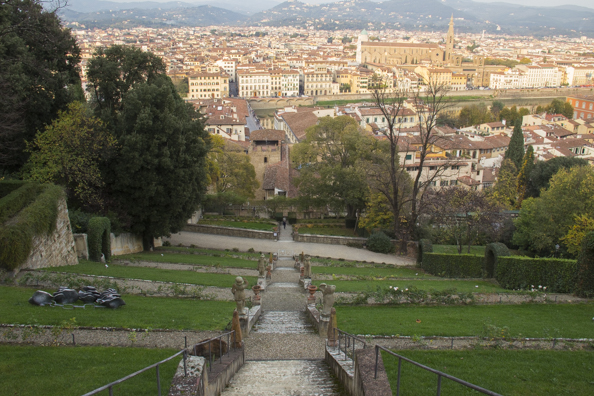 The gardens were also the venue for an exhibition of sculptures by the Austrian sculptress Helga Vockenhuber. Several large heads showing the subject in contemplation were dotted around the gardens as well as some gigantic ceramic flowers. 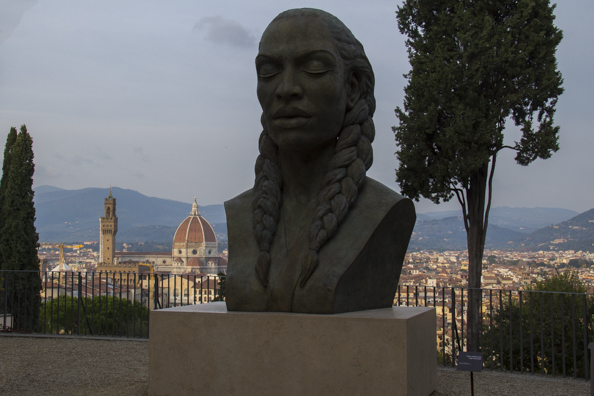 On the last morning, Sunday, I joined the queue waiting for the Rinascente department store in Piazza Republica to open at 10.30 and made my way up to the terrace of the café on the fifth floor. It was worth the effort as I had a great view of the cupola of the Duomo and the Campanile next to me. 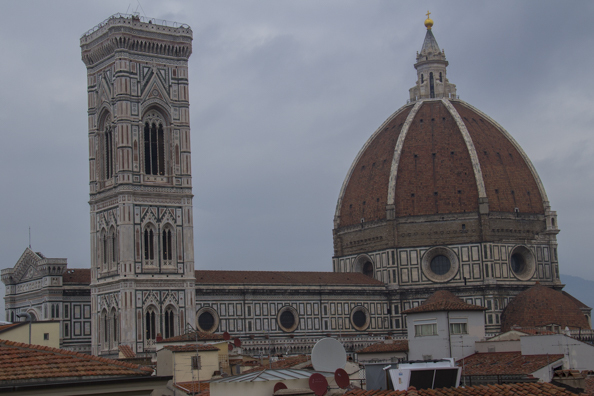 Below me I could see the splendid archway, the Arch of Triumph, that is the entrance to the Piazza Repubblica and watch the children enjoying the roundabout that is permanently based there. For centuries this square, one of the main squares of Florence retained its medieval character but then in the eighteenth century the town council decided to widen the square and give the centre a make-over resulting in the destruction of Medieval towers, churches, workshops, homes and original seats of the some of the Guilds. 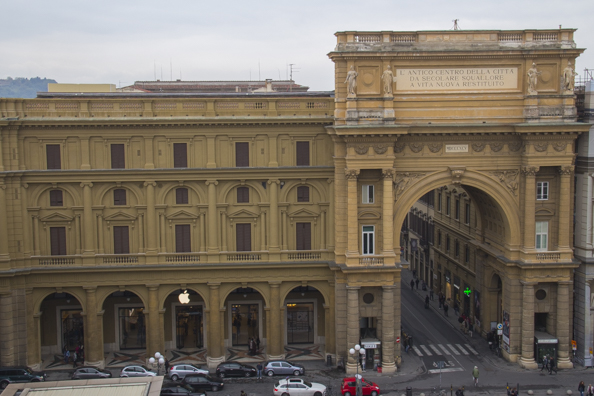 Getting there I visited Florence on a trip organised by Solos Holidays. We flew to Florence with British Airways from London City Airport. We were based in the hotel, Albergo Firenze in the heart of the city and within walking distance of all the main monuments. We were lucky that we could walk straight into the Uffizzi Gallery as usually there are very long queues. To avoid these queues tickets can be booked online at Tickets Florence.