Sanremo on the Italian Riviera

Before I visited Sanremo (also spelt San Remo) I was unaware that Italy had a Riviera and that, like the French Riviera, it became popular during the nineteenth because of the benefits to health it offered. However, in the rush to accommodate a flood of visitors a railway line along its coast detracting from its natural beauty. Now that line is being moved inland and the old track has been turned into a great cycle track, the Ponente Ligure, that stretches for twenty kilometres between San Lorenzo al mare and Ospedaletti and is, conveniently, punctuated with bike hire shops. This stretch of the Italian Riviera is in the region of Liguria and is on the part between Genoa and the French border known as the Riviera dei Fiori (flowers). 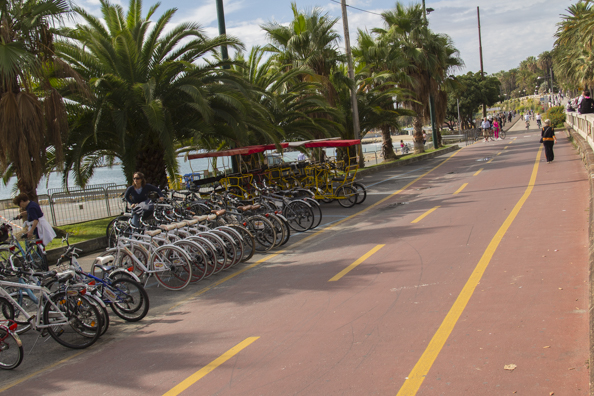 It is a very pleasant walk along the section of the cycle track that skirts the small port, Porto Vecchio, and marina, Portosole, of Sanremo towards the Villa Nobel. Alfred Nobel lived here for the last five years of his life and it is now a museum that includes the laboratory he built so that he could continue his experiments with dynamite, his invention that led to his expulsion from Paris. This Swedish scientist also held 355 patents for a stunning variety of inventions. He left a fortune in his will to fund the Nobel Prize honouring men and women from all corners of the globe for outstanding achievements in physics, chemistry, medicine, literature, and for work in peace. Following his death in 1896 Villa Nobel was sold in accordance with his wishes. During the 1960s the villa was bought by the local authority of Sanremo and has since been converted into a public museum. Sanremo is famous for the production of flowers – the surrounding area is populated by large greenhouses, and every year large quantities of flowers are sent to Stockholm to adorn the venue of the annual Nobel Prize Award Ceremony and Banquet. 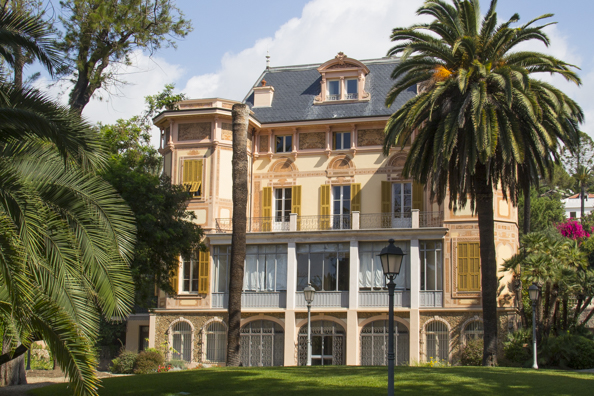 Another famous building in Sanremo is its casino, Casino Municipale di Sanremo (previously known as the Kursaal) which opened in 1905 with a gala reserved for special guests and soon became a cultural magnet and the building itself became a symbol of the town. For more than 100 years some of the most famous people in the world have passed through its salons and its theatre has staged some prestigious plays – a tradition that continues to this day. Another tradition of Sanremo also started in the casino when the first Festival della Canzone Italiana (Festival of Italian Songwriting was held there in 1951. In the same year the casino hosted the Miss Italia Competition. 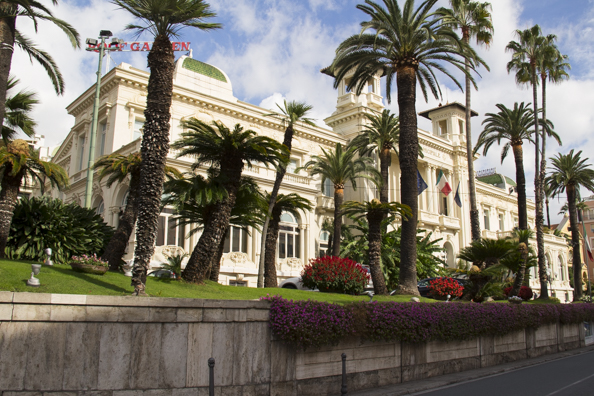 The Song Festival is now a well-established tradition attracting interest from all over the world. Since 1977 it has been held at the Teatro Ariston and some of Italy’s best known singers have found fame at the festival and many favourite Italian songs have been performed here for the first time. The Ariston was the first cinema in Sanremo and it opened in 1906 and is still the most popular cinema in the town. 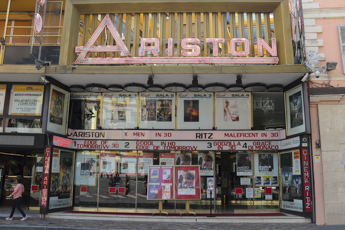 Close to the casino is the very striking Russian Orthodox Church. During the nineteenth century many Russians who suffered from tuberculosis regularly spent the winter in Sanremo and owned villas in the town. This small Russian community wanted to have its own church and with the help of their compatriots at home were able to buy the land and build the church. 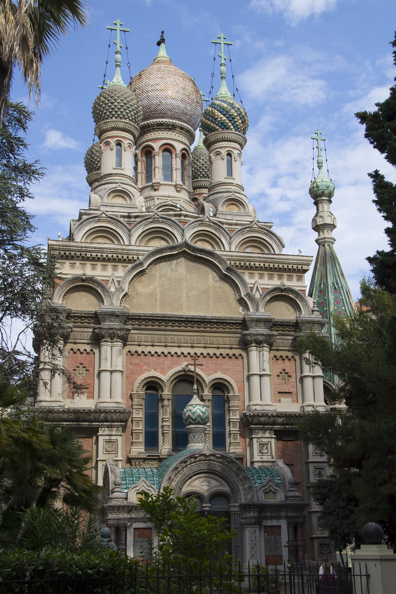 The sea front is not far from this church and like most popular Italian seaside resorts it is sectioned into private beaches all displaying brightly coloured sun beds shaded by sun umbrellas. Sanremo has both pebble and sand beaches. Most of these beaches have a small restaurant and fortunately visitors can eat there without having to pay the charge to use the beach. 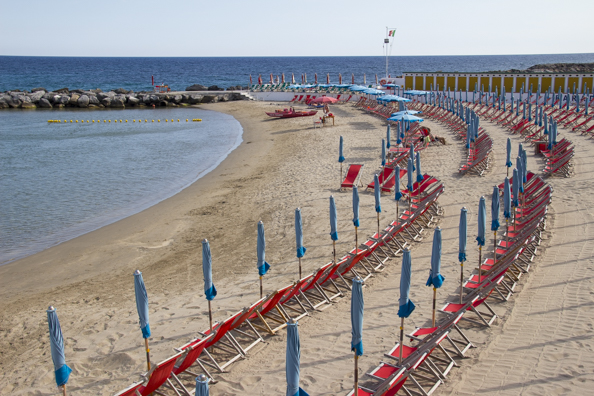 The Fort of Saint Tecla dominates the sea front of Sanremo. It was built by the Genoese to quell any uprisings in the town and its guns point at the town rather than out to sea. After being used as a prison for many years and now the fort is being completely renovated and will be used for tourism and cultural purposes. 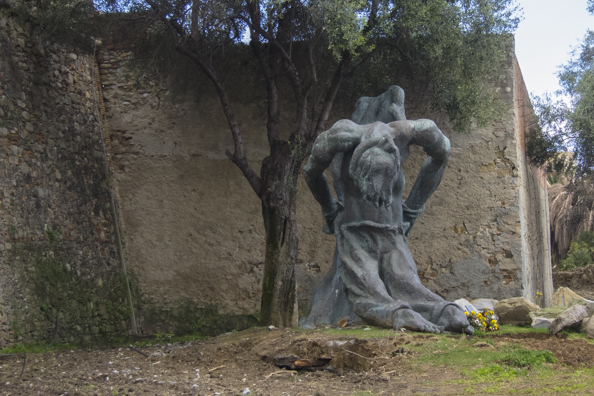 The Genoese also destroyed the town’s medieval castle when the town rebelled against their rule in 1753 and its site is now occupied by a park, Giardini Regina Elena that overlooks Sanremo. This lovely garden features a dramatic rockery and is dedicated to Queen Elena of Montenegro a regular visitor to Sanremo when the park was built during the eighteenth century. 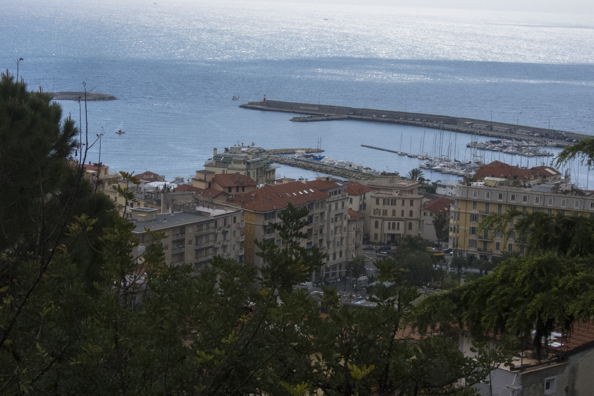 I had climbed up to the park through La Pigna, the medieval settlement above the town. I had plenty of time to wander through the narrow streets and alleyways and to get lost and found again due to the haphazard layout that was designed to confuse marauding Saracen pirates. Most of the houses are occupied as it is a popular residential area due to the peaceful car free streets and the cool of the sturdy buildings. The main entrance to La Pigna is through the fourteenth-century Porta di Santo Stefano in Piazza Santo Stefano that marks the boundary between the old and new town. La Pigna means pine cone and describes the way this settlement curls up round the hill like scales on a pine cone. Founded as stronghold in 1000 it was enlarged and strengthened for the next 600 years to protect the town from marauding pirates. It does not look as though it has changed much since then and has remained delightfully un-commercialised but strategically placed maps and information boards supply sufficient information for visitors to find their way around. 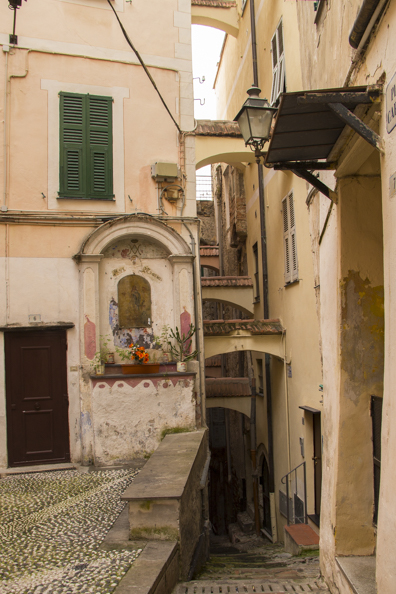 Close to the Giardini Regina Elena is the Sanctuary of the Madonna della Costa. The original sanctuary has been replaced by the present Baroque building constructed in the mid seventeenth century. It seems the money required for this new building was raised from the local population by a sailor who miraculously survived a pirate attack and who wanted to build a sanctuary dedicated to the Madonna della Costa who had acquired a reputation for the performance of miracles. The dome was added at the end of the eighteenth century. The elaborate interior is decorated with marble, stucco, murals and grandiose sculptures. 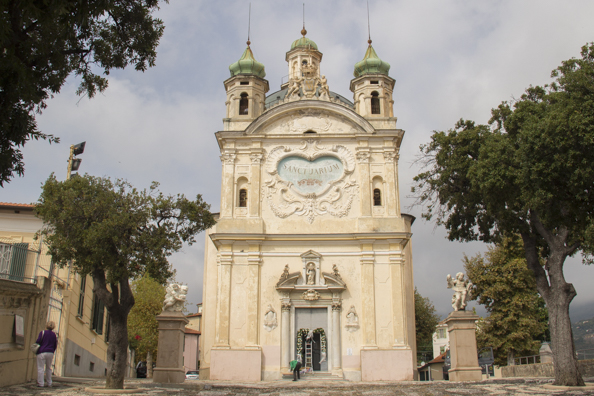 Sanremo is also well-placed to visit the French Riviera. To find out more read my blog Celebrations on the Italian Riviera.