I was so excited when it was suggested I join a desert safari in Morocco that I forgot to ask many relevant questions such as the size of the group and the size of the vehicles. In fact there were five of us in one vehicle. Our local guide claimed both front seats which meant two of the group had to crawl into the child-sized back seats and as I was one of the only two who could fit into these seats it promised to be an uncomfortable week. However, we had plenty of stops en route and the scenery was sufficiently stunning to distract me and make the whole experience worth a bit of discomfort. We really did travel the open road crossing semi-desert punctuated by the occasional oasis. 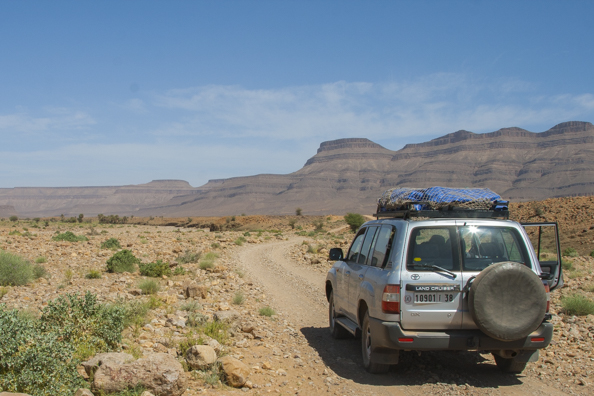 Optional excursions can also be a problem when travelling with a small group and so it proved to be on this occasion as three members were very anxious to spend the night in a Bedouin tent and two of us were equally determined not to. I had already experienced a long camel ride part of which I spent clinging desperately to my bolting beast. As soon as the handler dropped his rope he was off and I could do nothing about it from my perch on his back – except scream for help. Finally a fourth member of our party succumbed to the pressure of constant reminders that the trip could not run unless he went as well! Then he dropped out and I was nominated as his replacement. I wrapped a scarf around my head to protect me from the sand laden wind and clambered on to my animal. Despite my initial reluctance I soon began to enjoy the swaying motion as the animal ambled along, the solitude and the prospect of seeing the sun setting behind the dunes that surrounded us. 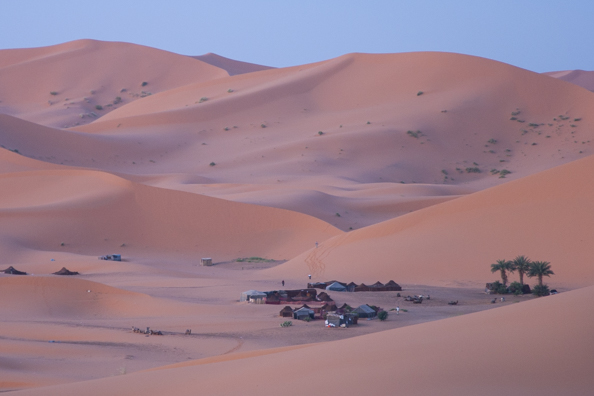 By the time we reached our Bedouin camp it was pitch dark and the sky was studded with brilliant stars. When we asked where the toilets were we were each given a small torch and told to pick our spot. We were soon strung out in a giggling line just beyond the lights of the encampment. Our meal that night was the best I ate during that trip – a very tasty vegetable tajine accompanied by water. Our guide had forgotten to mention it was an alcohol free zone and to suggest we bought our own drinks to take with us. It was a short night as we had to leave early to watch the sun rise from the top of a dune. Trying to walk up the dune was an experience but our escorts were happy to help with the occasional push or pull. As rays of sun painted a picture of light and shade around us it was an image I knew I would carry with me for a long time.

My next trip to Morocco was a tour by road and rail starting in Casablanca. Macdonalds was not the venue I had envisaged for my first lunch in this romantic town but due to our visit coinciding with the most important festival in Morocco – Eid Al-Kabir – it was the only place open in the town. Situated on the sea front this fast food outlet was big enough to accommodate all the visitors to the town that day and we could sit outside overlooking the sea. Eid Al-Kabir commemorates the willingness of the Prophet Abraham to obey God and sacrifice his son. When he tried to do this he was stopped by God and told to sacrifice a ram instead – and this sacrifice is observed to this day. Tourists are encouraged to stay away until the ritual is over (around eleven in the morning) but there is evidence everywhere as skins from the slaughtered animals are transported through the streets on carts and the heads are burnt on large bonfires. Before lunch we had visited the amazing Great Mosque of Hassan II the third largest mosque in the world and architecturally magnificent. 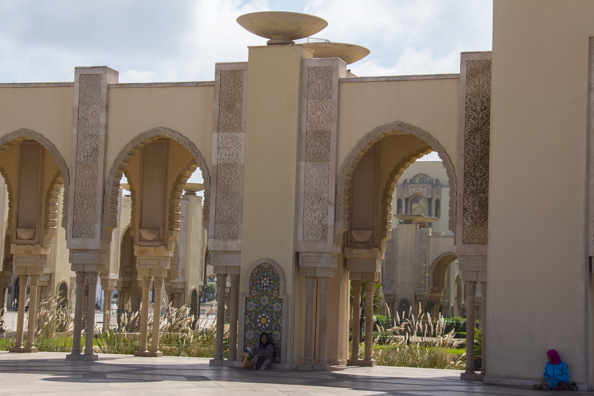 From Casablanca we went by train to Fez a very pleasant experience as our seats were pre-booked, the train was punctual and we could sit back and view the passing countryside. The next morning we started our city tour at the Royal Palace. It seemed that every city tour started there as we battled through the crowds in the Place des Alaouites to take pictures of the ornate doors that were permanently closed to the public. I went back later in the day and it was deserted. I often wonder why some enterprising agencies don’t organise their tours to finish where everyone else starts! After strolling through the Jewish quarter we followed the convoy of tourist buses up the hill to the Southern Fort for panoramic views. Below us we could see the three distinctive areas of the city – Fez el Balihttp (the old, walled city), Fez el -Jedid (the new, planned city of Fez) and the Ville Nouvelle (the latest section of Fez). Once we were through the blue gate or Bab Bouijloud one of the most famous gates in Morocco, we finally left the crowds behind as we explored the labyrinth of narrow streets – quiet for once as most of the small shops were closed due to the public holiday. This meant we were not being constantly jostled by crowds and could enjoy some memorable sights such as the school Bou Inania Madrasa, the Nejarine Museum of Wooden Arts and Crafts and the Kairaouine Mosque (Djemaa el Kairaouine) which is the second-largest mosque in Morocco and probably the world’s oldest university. 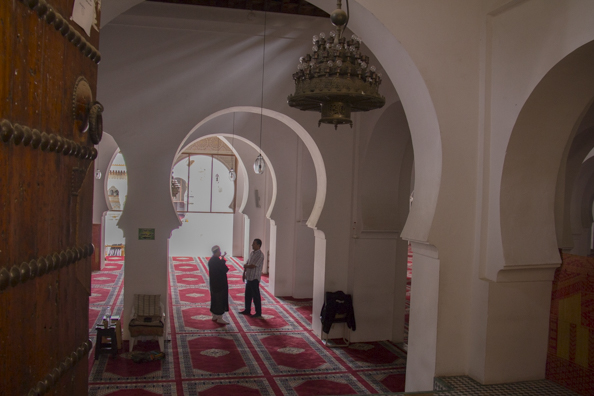 On the road to Volubilis we stopped above a reservoir. The air was fresh and sweet with aromas from the nearby stalls piled high with squash and pomegranates. After tasting the latter we continued on our way. I remember the ruins at Volubilis for three reasons. The beauty of the place – pillars and arches stark against a blue sky and a background of rolling Moroccan countryside. The enthusiasm of our guide, Mr Rashid, as he explained the layout of this fortified Roman city that was built on a foothill of mount Jebel Zerhoun which, because of its isolated position is one of the richest sites in North Africa. And the third memorable moment was the lecture we got from a guide with another group at the site about tipping toilet attendants. Moroccan guides can be very aggressive about tipping their compatriots. 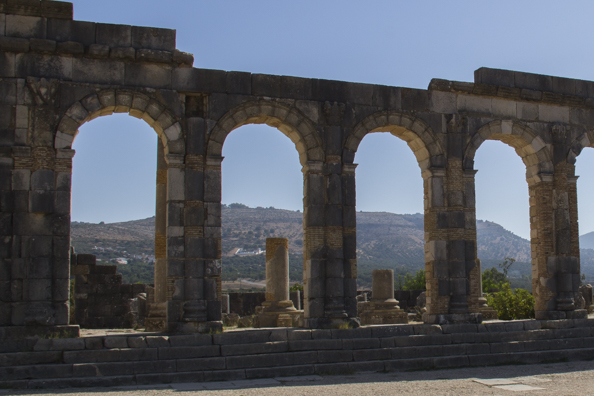 Our next destination was Meknes. Where we strolled through the massive granary or the Water Palace (Der el Ma) which sultan Moulay Ismail built on a reservoir to store grain to feed the twelve thousand horses kept in the Royal Stables behind this building. Despite the partial destruction of these stables by an earthquake during the eighteenth century it is still an impressive sight and easy to imagine how it looked when its equine guests were in residence. Each one had its own groom and slave whose duties included catching the urine of their ‘master’ in a bowl. These palatial stables are not the sultan’s only claim to fame as he reputedly sired over one thousand children. 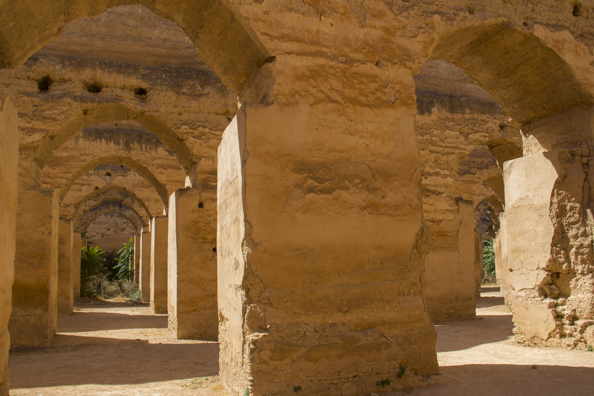 Our tour of Rabat started at the Mausoleum of Mohammed V which houses the tombs of Mohamed and his two sons. Impressed though I was by the sight of the mounted guards in their Berber warrior uniforms my lasting memory of Rabat is the blue and white them of the narrow residential streets on our way to the Kasbah des Oudayas. I spent spent a lot of my free time in Rabat in earnest discussion with two local police men who claimed I had been taking photographs of them. They were not impressed by my assertion that they had walked into my image and insisted on checking my last few photos and made me delete the ones they suspected might feature them! 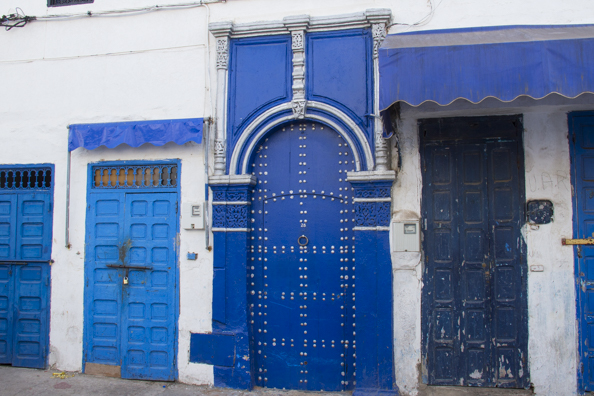 Marrakech is a town of two time zones, day and night. We arrived there in the early evening and made our way to its heart Djemaa el Fna Square. It was buzzing with people, sizzling with cooking and bright with lights that illuminated each stall. Makeshift restaurants were surrounded by tables with bench seats and the cooks were encouraging people to come and eat their food. I made my way to Restaurant Chez Aicha which had been recommended to me and I was not disappointed as the food was delicious. As soon as we sat down we were all given a large freshly baked bread roll which was a good accompaniment for the spicy soup I ordered followed by a plate of grilled prawns. We could not linger over our meal as people were waiting their turn. As I made my way out of the square I passed an old man sawing with his bow at the two remaining strings of an ancient violin. The sound he produced was just as bad as one would imagine it could be but nevertheless recalling that sound still makes me smile. 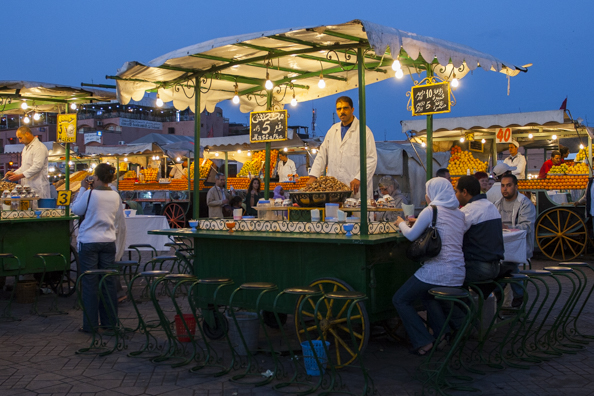 I was up early the next morning roused by the sweet sound of birds singing but within minutes a new voice joined in – the throaty call to pray coming from the minaret of the local mosque. Today we saw a very different town as we strolled around its most famous attractions. We started at the Koutoubia Mosque then moved on to Bahia Palace where ornate carvings and colourful tiles complement the heavy brown wooden doors that enticed us visit its many rooms and courtyards. From the palace we entered the narrow alleyways of the souk where roaring motor bikes chased us into hiding in narrow passages. I marvelled at mounds of fresh olives, peaks of coloured spices and piles of colourful ceramics. We finally emerged in an empty Djemaa el Fna Square fringed with juice-making stalls – a huge contrast from the previous evening and a memorable end to my time in Morocco. 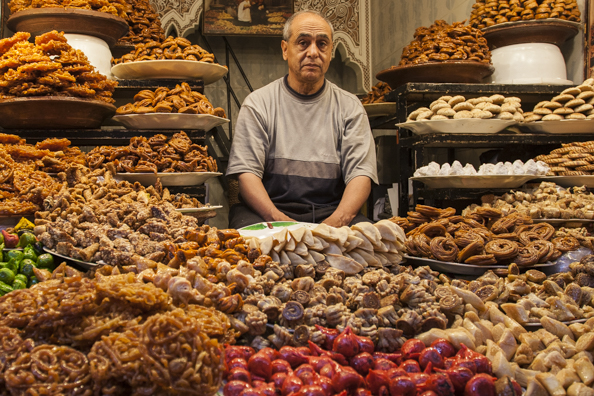 Other posts on Morocco include my Moroccan desert safari experience and visits to Rabat, Fez and Marrakech