My most vivid memory of the Amalfi Coast is driving along it at rush hour – weaving my way through a twisting tunnel of steep grey rock face on one side and sheer drops on the other. A wedding party was also on the move and horns were blasting as cars overtook me on hairpin bends. There was no time to appreciate the fabulous views as I just had to concentrate on surviving and arrived safely at my destination, Sorrento. 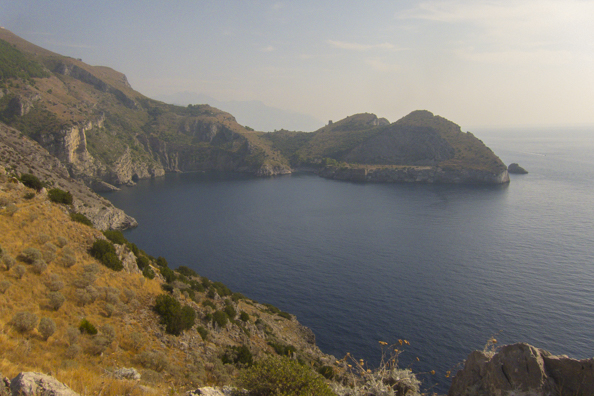 Sorrento is ideally placed to explore this coastline. We were based at the elegant Hotel Tramontana that clings to the cliffs overlooking the beautiful Bay of Naples. Sorrento and the surrounding area is famous for its traditions and folklore and I was fortunate to experience one of the most unusual traditions when staying there at Easter. I though the maitre d’ was joking when he told us there would be a parade through the town starting at three the following morning. Inspired by his enthusiasm for this event I did get up and go outside at the appointed hour. The streets were empty and the only anticipatory sign were the flaming candles lining the street. As I walked down the road I glimpsed white figures flitting across the junction ahead, then I heard music and finally hundreds of hooded white figures rounded the corner and marched past. The significance of this white parade was conveying the Virgin Mary to various churches in the town searching for her missing son. It was unlike any event I had ever witnessed before. 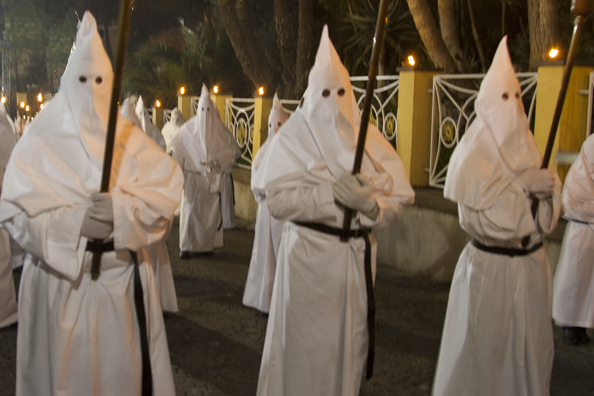 The romantic island of Capri, once a favourite destination of Caesar Augustus and his successors, is just a short distance by hydrofoil from Sorrento. Once on the island I had a great day which started by visiting the blue grotto. The entrance is so low we had to lie on the bottom of the boat while our boatman pulled us inside using a rope attached to the rocks. This narrow entrance opens out in a large chamber which we circled with several other boats while our oarsmen sang Oh Sole Mio. From Anacapri I took the chair lift to the top of Monte Solaro and spent some time admiring the stunning views of the island below me. 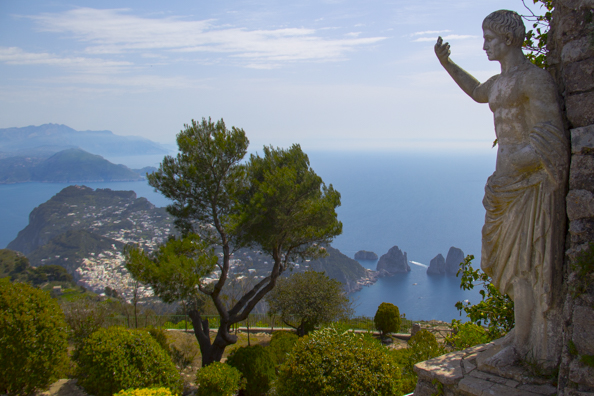 Fortunately my next trip along the coastline was in a small coach and I could concentrate on the scenery. We stopped at a view point above the pretty town of Positano a favourite haunt of artists and purveyors of Moda Positano linen apparel and sandals. Narrow cobbled streets lined with boutiques and souvenir shops lead down to the small beach and the port. Half way down is the Chiesa di Santa Maria Assunta (Church of Our Lady of the Assumption). It was built to worship a Byzantine icon of the Black Madonna that was brought to Positano in the twelfth century by Benedictine monks who traded and fished along the coast. It was a miracle that the icon reached Positano as it was part of the cargo on a ship becalmed off its shore. As they tried to get the ship moving the sailors heard a voice saying “Posa Posa” or Put me down, put me down (possibly the origin of the name Positano). The captain thought this meant that the Virgin wanted to stay and he turned towards the shore. Immediately the ship began to move. The icon was given to the inhabitants of Positano who chose the Virgin as their patron and built the church in her honour. 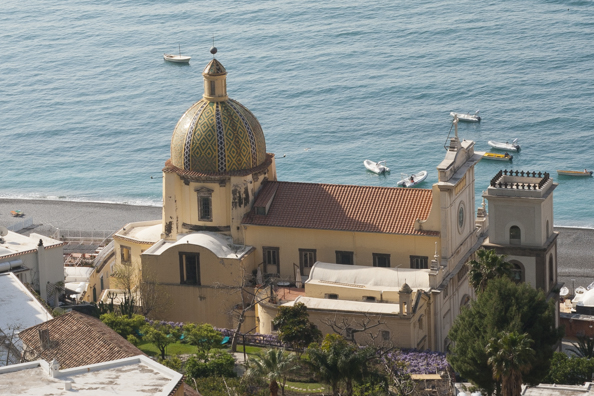 Further along the coast, accessible by road or boat, is the town of Amalfi. Strolling through the maze of narrow streets it was hard to believe that this small town had been the centre of the first of the four Maritime Republics of Italy dominating international trade. These streets were so narrow it was like walking through one huge building. They had been constructed like this as a defence against invading pirates. Pretty girls would prance by the sea shore enticing them inland and as soon as they entered the town hot oil would be poured on them from the windows above. We emerged into the Piazza Duomo and after skirting the large Baroque style Fontana del Popolo (The People’s Fountain) we stopped on the first of the sixty two wide steps which sweep up to the entrance of the impressive Cattedrale di Sant’ Andrea (Cathedral of Saint Andrew) or Duomo di Amalfi (Amalfi Cathedral) to admire this unusual building that looks more Arabic than Italian. Below the cathedral is the crypt that contains the remains of Saint Andrew, the patron saint of the town, that were brought back from Constantinople during the Crusades. Every November, on the feast day of this saint, it is said that a miraculous liquid called ‘manna’ is excreted from his tomb. A legend tells that in June 1544 Saint Andrew saved the town from Barbarossa’s attack when he provoked a terrible storm preventing his ships from landing. Each year men dressed in white process to the beach carrying the statue of the saint and fishermen bring offerings of fresh fish to leave by the statue before it is taken back to the cathedral. 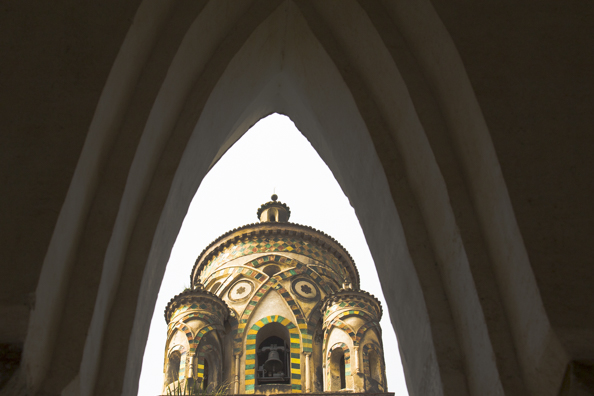 Perched above Amalfi is the tiny town of Ravello. Founded by a colony of noble patricians during the sixth century its beauty and tranquillity has attracted an impressive list of important international artists, musicians, actors and other distinguished visitors including Winston Churchill, Edward Grieg and D. H. Lawrence. The main square is dominated by the Duomo di San Pantaleone (the Cathedral of Saint Pantaleone). Entry to this eleventh century Romanesque building is through a main door embellished with beautiful bronze panels produced in Constantinople by the artist Barisano from Trani. The town also has two famous Roman Villas, Villa Cimbrone and Villa Rudolfo. I decided to visit the latter and skirted round the main building to reach its main feature – a superb terrace garden that overlooks the sea. Every year in July this is the stage for the famous Wagner Symphonic Music festival. 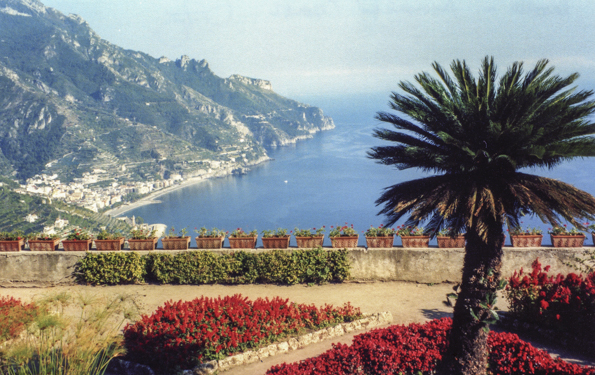 Sorrento is on the Circumvesuviana a train service that stops at both famous excavations in the area, Pompeii and Herculaneum. Pompeii is the more popular of the two and every time I visit the site I am once again impressed by the size of the excavations. Pompeii is also accessible on the main line to Pompeii town and then visitors have to walk through the town to the archaeological site and the entrance there is close to the Anfiteatro. I like to use this route and hire an audio guide to do my own tour – away from the crowds pouring through the main entrance. 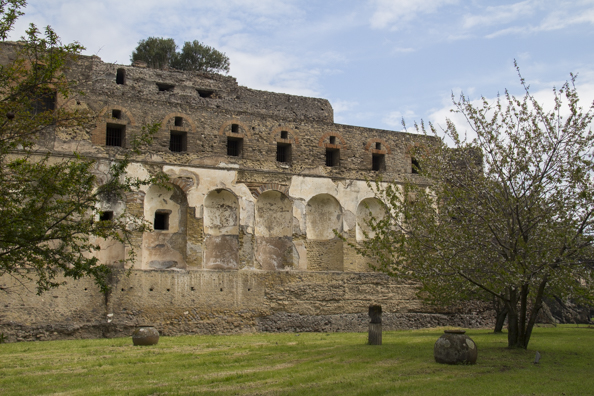 Pompeii may be the largest of the two sites but Herculaneum on the slopes of Vesuvius itself has the most complete buildings as the volcanic mud flowed into them and acted as a preservative. Audio-guides and guides are available here although the latter should be booked in advance as they are not always on-site hoping to find customers. This site provides a great insight of life during that period but I am glad we have moved on from the use of slaves to provide urine to whiten the laundry. 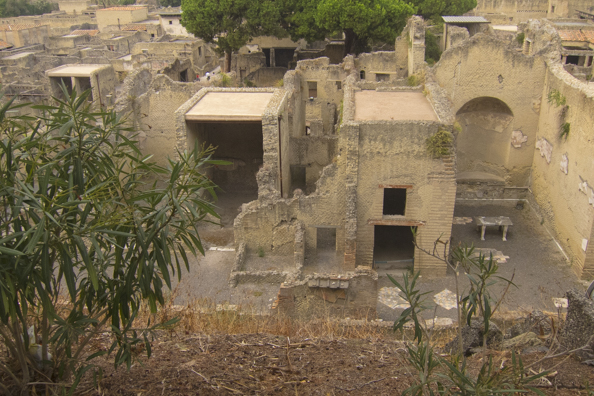 It is an interesting drive from Herculaneum to the crater of Vesuvius winding up the mountain with views of the Bay of Naples getting more distant. The final ascent to the crater edge has to be done on foot but it is a well-constructed path that takes the steepness out of slope. However nothing can be done about the tiny stones that make their way into open sandals or the pink dust that coats your shoes. There are brushes at the exit to deal with the second problem – for a small tip. The price of the ticket includes a short guided tour of the crater. It is very exciting to look into the crater and watch the smoke curling up from the fumeroles. 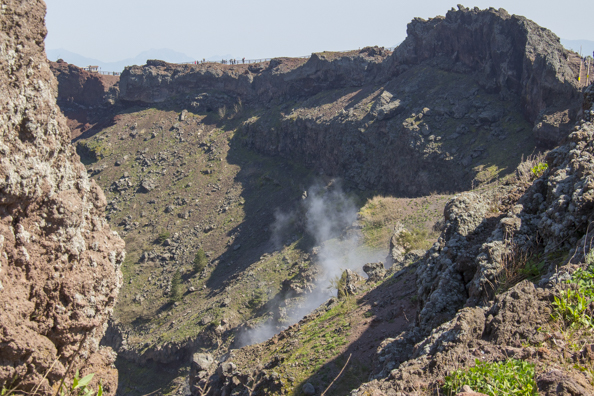 Further along the coast is the town of Salerno accessible by boat from Amalfi. My only reason for visiting this town was to break my journey further south and I knew very little about it. I was surprised to discover it has an elegant old shopping street, several markets, a castle on the hill above the town and one of the most beautiful cathedrals I have ever seen. After exploring the town I strolled along the promenade or Lungomare Trieste to the Ristorante La Conchiglia where I had dined the previous evening and had discovered their delicious pizzas made from organic flour. This time I tried their spaghetti alle vongole, my favourite dish, and it was delicious. 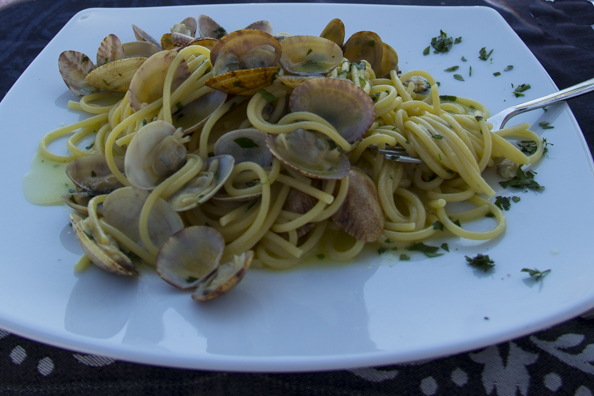