A Dozen Delights of the Dolomites in Winter

As the first snow reports for next winter make their way into my inbox my thoughts head for the Dolomites where I have spent many happy winters. I love the sophisticated resort of Madonna di Campiglio which features interesting ski runs both through the trees and above the tree-line. These slopes are linked to all the main cabin lifts so it does not matter where you start it is possible to ski round the whole resort – but don’t forget to stop to enjoy the spectacular scenery. 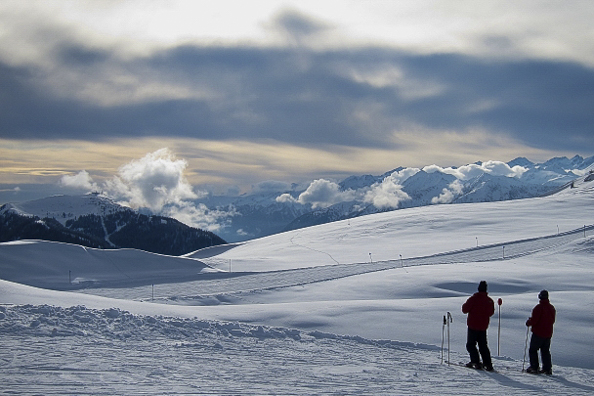 The slopes here are peppered with delightful restaurants all offering restaurant and self-service facilities featuring tasty pasts dishes and traditional cuisine. My favourite is the Ristorante Viviani on the Pradalago ski area. The cosy restaurant offers a varied menu (it changes every Thursday), efficient service and friendly staff. Here the diner can sample truly traditional dishes such as donkey stew and grilled horse meat all accompanied by a very good house wine. 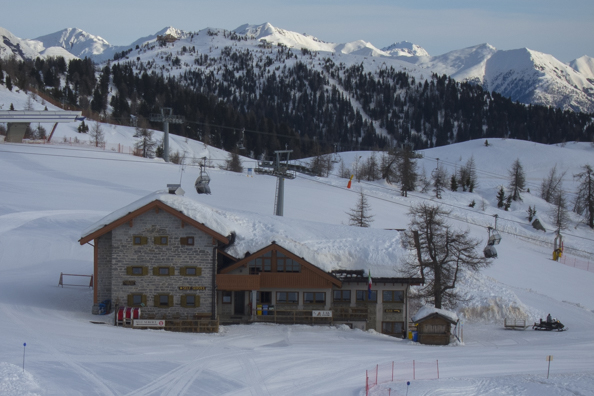 Christmas in Madonna di Campiglio is magical and the town and the lower slopes feature tasteful decorations and large Christmas trees that light up the town in the evenings. A favourite venue for aprè ski is the Bar Suisse in the town centre where skiers gather at the end of the day to enjoy cocktails, coffee and cake. 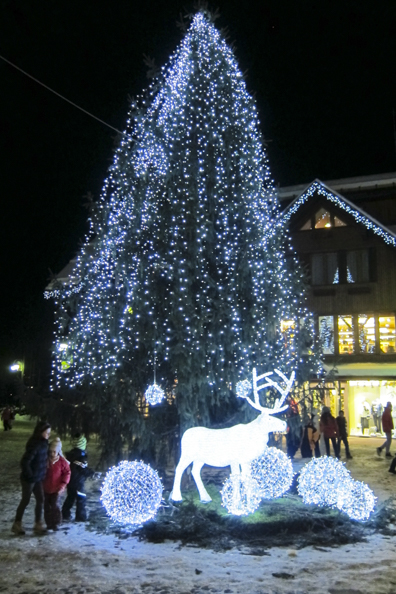 Madonna di Campiglio is part of the Ski Area that embraces four ski resorts and 150 kilometres of ski runs. The other three are Folgarida, Marilleva and Pinzolo. Pinzolo has the most challenging slopes and great views up the valley to Madonna di Campiglio. 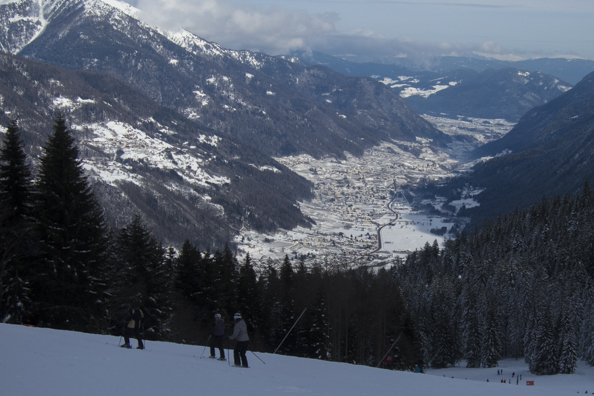 The cabin lift from Madonna di Campiglio arrives in the middle of the ski area where a chair left whisks skiers up to the top of the prettiest run, the Brenta, a good warm up run before moving on to the more challenging reds and the long but wide black, Dolemitica. 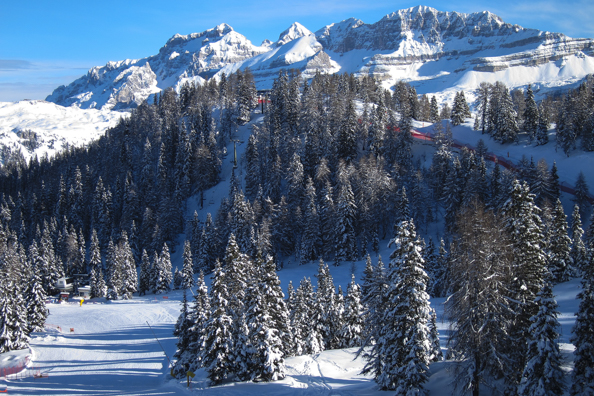 Madonna di Campiglio and Pinzolo are in the Val Rendena whereas Folgarida and Marilleva are in Val di Sole further up the mountain. These are the closest ski areas to the small village of Dimaro that is linked to the slopes by a ski shuttle service and public buses. 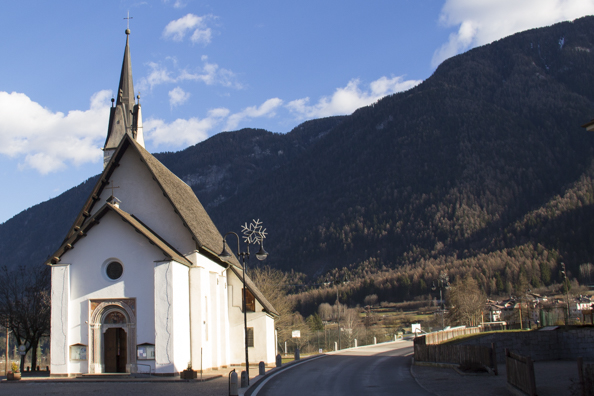 Last year I spent Christmas in Dimaro and in the evenings I followed the outside trail of nativity scenes and also visited an inside exhibition that featured small nativity scenes made from different materials from pencils to leaves. But the most impressive nativity scene was a hand-made replica of the village that I found in the basement of the village school. As I stood admiring the details we were taken through twenty-four hours from sunrise to sunset. 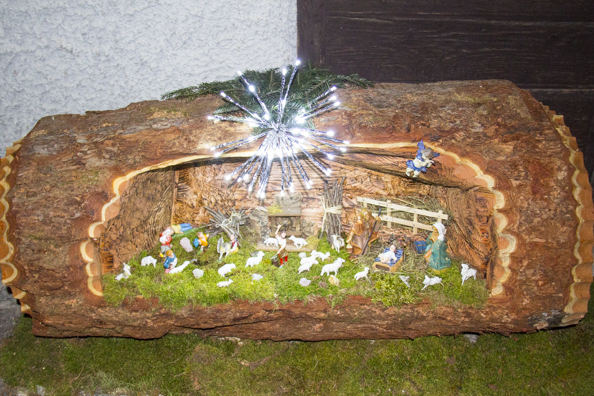 A daily bus service runs between Dimaro and Passo Tonale and the Superskirama includes this resort so for beginners and more experienced skiers looking for an easy day it is worth the trip. This resort is also a good standby if there is not much snow as it does have a glacier and an interesting War Memorial. 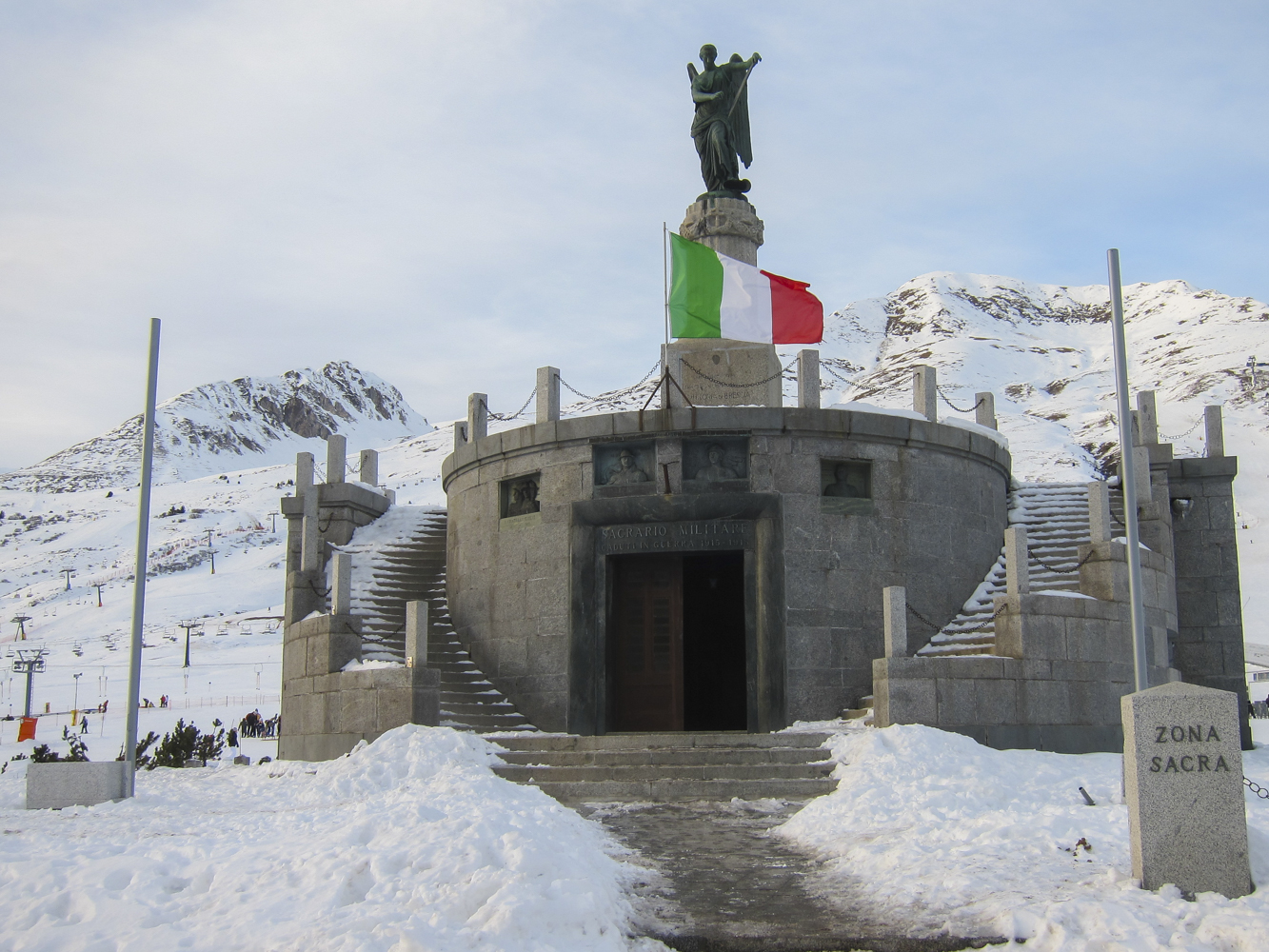 The Dolomites are famous for their amazing sunsets over the stunning rose tinted peaks that emerged from the depths of the sea about seventy million years ago. Since then glaciers have advanced down the valleys and volcanoes have erupted and various processes of erosion have resulted in natural pinnacles resembling cathedrals in the sky. Enthralling sunsets occur when the coral deposits in the rocks catch the last fading rays of the sun and hold them, glowing a rosy red until darkness surges in. This natural phenomenon of alpenglow is also known as enrosadira in the local Ladin language language. Ladins are one of the smallest Ethnic minorities in Europe and despite a chequered history still cling tenaciously to their culture, traditions and legends. throughout the mountain valleys of the Dolomites. They speak an incomprehensible ancient language derived from the Celtic Rhaetian dialects of the original inhabitants during the Bronze Age, and Latin – the result of an encounter between northern colonists and Roman legions in the first century BC. The most impressive sunsets in the Dolomites can be seen from the town of San Martino di Castrozza where the mountains retain their rosy glow for at least half an hour and provide a dramatic back drop for the ice sculptures that often grace the town. 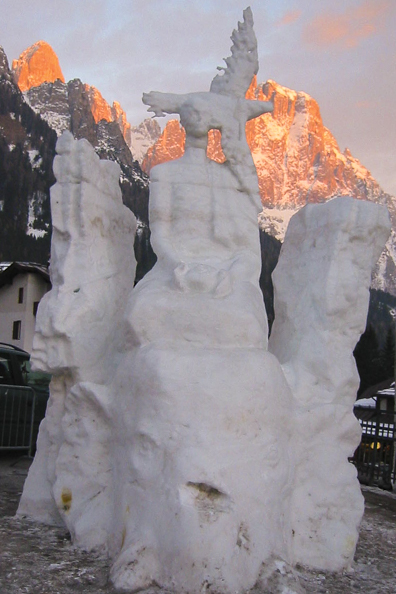 The ski area here has three separate and different areas all easily accessible from the town. The rolling slopes of Passo Rolle offer a gentle contrast to the steeper runs descending from the Tognola cabin lift and the small ski area in the town offers the thrills of night skiing. 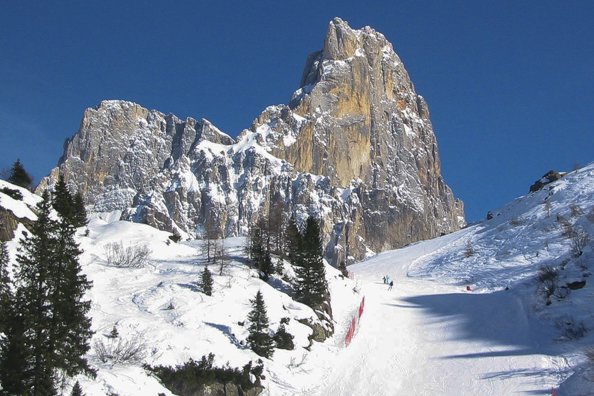 Folgaria has a very pretty ski area with five distinct sections but all linked by lifts or ski runs. I love to get the little tourist train every morning to Costa and then ski to the main ski area, Fondo Grande, to meet my companions who have travelled there on the ski bus. Both Folgaria and Lavarone (a bus ride away) are very quiet during the week but busy at the weekends due to its proximity to local towns. 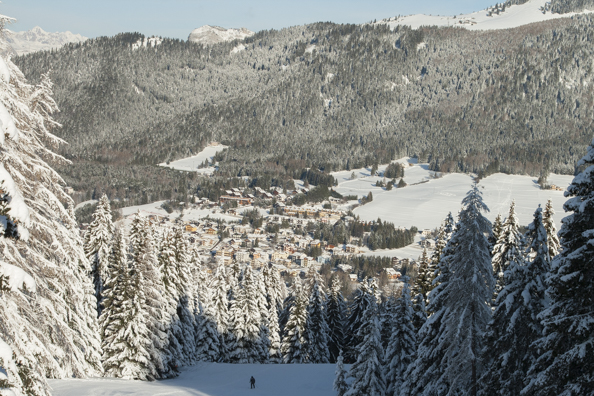 Italians are very good at promenading and parading and once while in Folgaria we were treated to a parade for the World Schools Ski Championships which were taking place in the resort which included several bands and a display of flag throwing. Truly a delight. 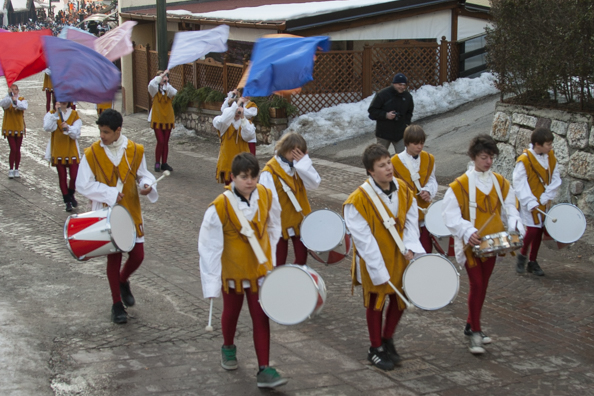 Fascinated by the Dolomites and want to read more then have a look at my other posts which include Trentino, Madonna di Campiglio and it’s walks in particular the walk Cinque Laghi and its skiing as well as Dimaro and Pinzolo
*******************************************************
Getting there
From 05 December 2015 to 03 April 2016 the Fly-ski shuttle will operate a network of transfers from the airports of Verona, Venice, Treviso and Bergamo to the mountain resorts of Trentino. An alternative for those going to the resorts in the Val di Sole is the Dolomiti Express from Trento.