Tuscany must be one of the few places that looks exactly the same in photos as it does in reality. Its capital Florence may be a well-worn tourist trail but it still has some surprises round its corners and when I turned down a side-street I found three lovely characters sitting outside the Gallery Art Hotel in Vicolo dell’Oro, a quiet courtyard close to the Ponte Vecchio 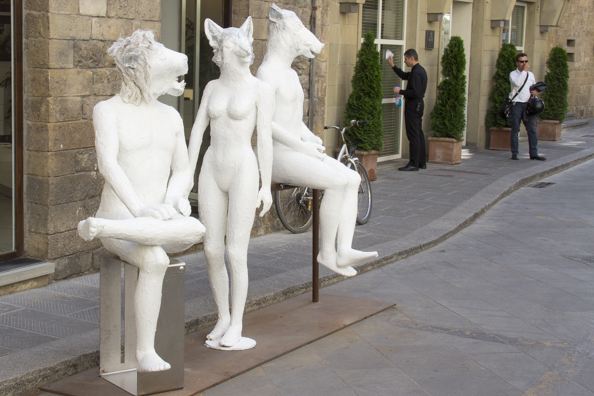 My favourite place in Florence is the Palazzo Pitti and in particular the Boboli Gardens behind the palace behind it. On my last visit I went straight there so I had plenty of time to explore the gardens and at the top I found the Forte di Belvedere surrounded by the Fortezza da Basso. From the ramparts of this fort which perches on the top of the Boboli Hill I had a great view of the city below. The fort was inhabited by a variety of bronze figures, some sitting on walls, some crouching in a long line of crouching figures and some forming a big heap on the ground – all the work of Anthony Gormley and part of the current exhibition HUMAN. 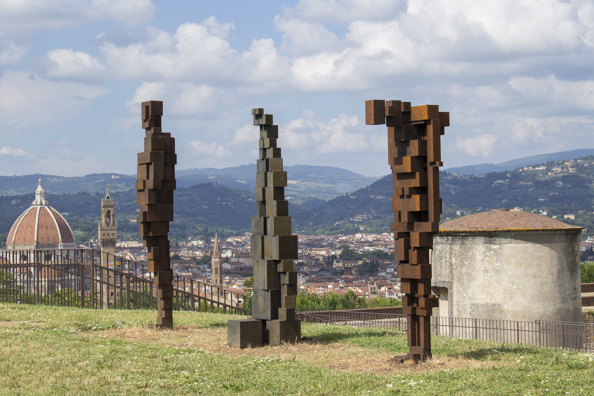 Siena is famous for its Palio and as the winners celebrate for the twelve months the streets of the winning contrada will be festooned with flags and lit by decorative lamps. I love to see these colourful additions to the historic buildings and to work out which of the seventeen different contrade, all represented by an animal, real or mythical, won the last two races. 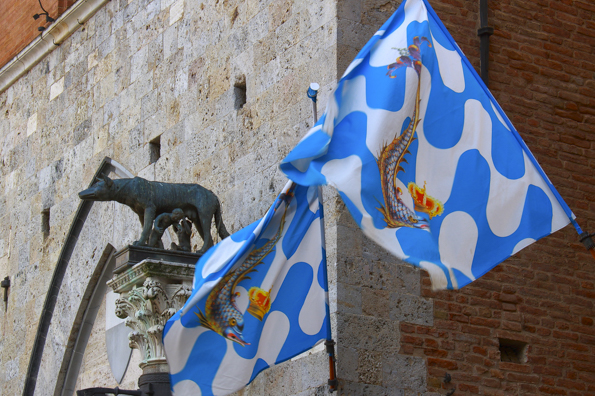 Siena is always busy so the restaurants are crowded but walking along a narrow street from the cathedral to the il Campo I found a tiny restaurant, Osteria il Cancellino, which had a free table and decided to stop there for some lunch. I had heard about the traditional Tuscan slow-cooked spaghetti known as pici and I was delighted to see that it was on the menu with pepper and parmesan. It was delicious and memorable. 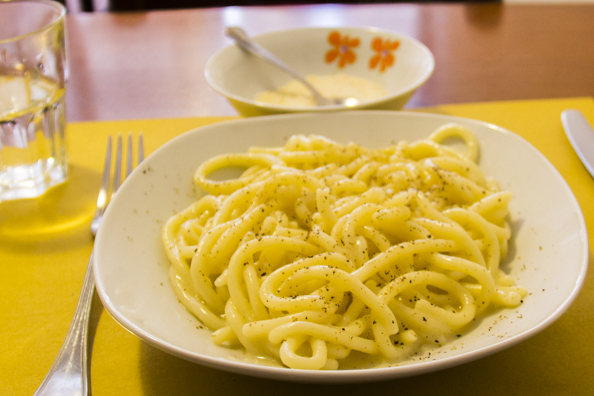 Lucca is unusual because not only is it surrounded by walls but the walls have a tree-lined boulevard on top of them created by the Duchess Maria Luisa of Bourbon and establishing a lovely circular walk. It was while I was on the walls that I first saw the Comunale Orto Giardini di Lucca (public botanical gardens) and when I had completed my circuit of the walls I went back to the gardens. I strolled around the lake where I spent a long time watching the little terrapins among the lily leaves and then moved on to the orchid house to enjoy the exotic blooms housed there.

Pistoia is a reflection of its more famous neighbours but does not attract so many visitors so it was a joy to explore without the crowds and especially interesting was the underground tour of the town beneath the old hospital, Ospedale del Ceppo. These tunnels ran from the old port of Pistoia to its defensive fort, Fortezza di Santa Barbara but as yet they are have not all been opened up so when I emerged in the town I decided to walk through the town to the fort. My route took me across the Piazza della Resistenza inside the Parco Pubblico which is currently undergoing major re-planting with an impressive collection of flowers and shrubs. Raucuous squawking alerted me to the presence of grey herons in the trees surrounding me. Birds fascinate me and to find these beautiful birds in the middle of a town was a real treat. 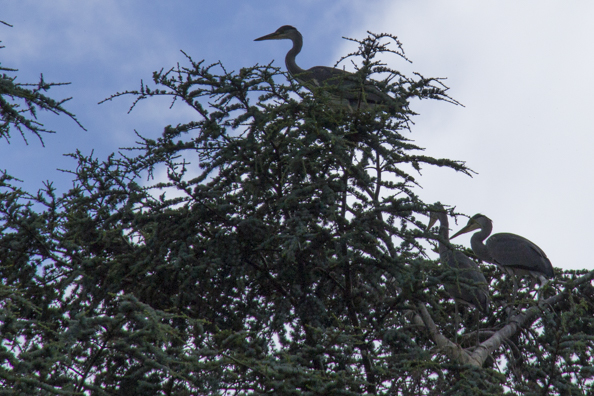 I loved my day out in the seaside town of Viareggio – a breeze tugging at my hair, sand between my toes and salt water lapping round my ankles – it was such a contrast from the hustle and bustle of sightseeing. After having a coffee in a restaurant on the beach I threaded my way through its ranks of empty sunbeds to the water’s edge then strolled along the beach to the marina at the far end of the town. Here I found the lovely sculpture l’Aspetto (the waiting) by Inaco Biancalana portraying a mother and her children waiting for her seafaring husband to return to them. 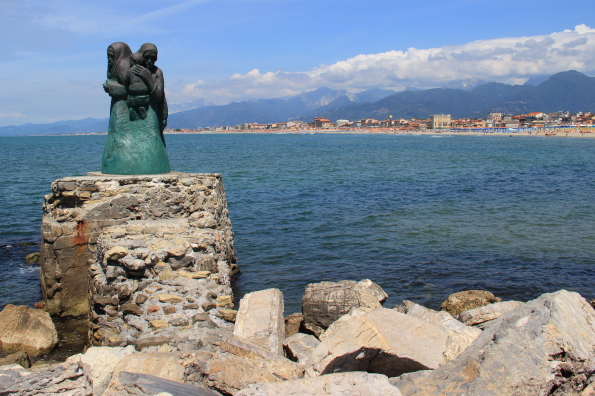 While in Tuscany I was based in the spa town of Montecatini Terme where there was plenty to explore including the village of Montecatini Alto perched on a hill above the town. This was the original settlement in the area and features some lovely old buildings including the church dedicated to Santa Barbara. The beautiful interior of this church is a sharp contrast to the display of armaments and fire-fighting equipment in its churchyard – all dedicated to the many facets of this saint who is the protector of the Italian Military Navy, the Fire Brigade, the Army (Artillery and Civil Engineers) as well as of the miners and oil workers, geologist, mountain men, architects, bell ringers, towers and fortresses 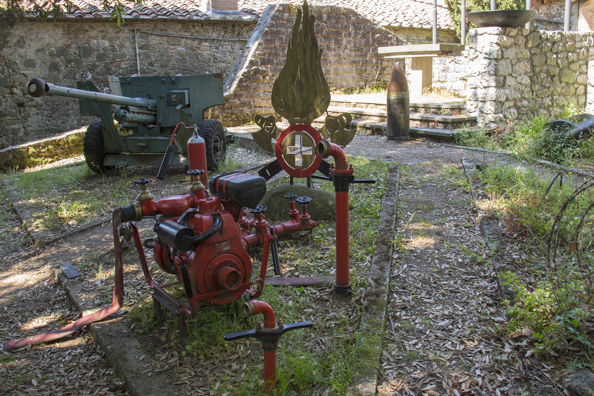 Many of the spas in Montecatini Terme have been restored and converted to different uses but the Tettucio Terme is still a spa. Set in beautiful grounds it is a lovely venue to while away a few hours and maybe enjoy a coffee in the café while listening to the live music, a regular feature. 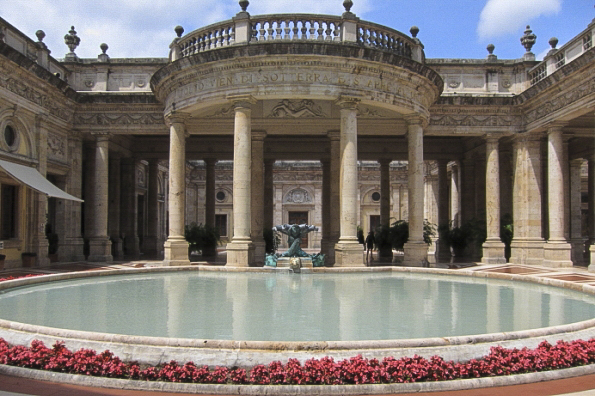 Although I am not really an opera fan I love to go to the opera concerts that are held at the Excelsior Terme in Montecatini Terme. These are memorable evenings with a good mixture of operatic arias performed by two or three professional singers accompanied on the piano in a beautiful setting. At the interval the audience is invited to go outside to sip a Prosecco and enjoy some sweet biscuits. It is a lovely way to end the day. 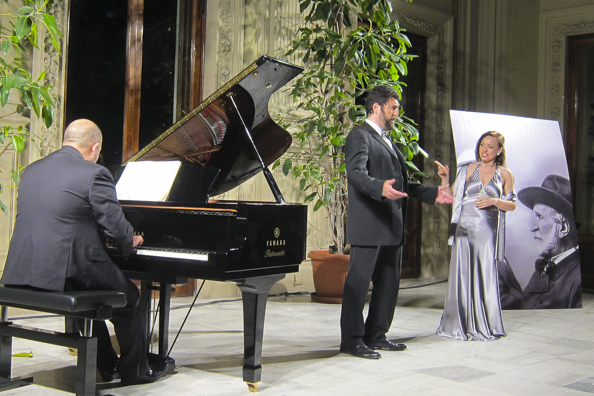 The most popular image that visitors take home from the Leaning Tower of Pisa is a photo of their efforts to push the tower straight. My image of my last visit is my most amusing recollection of my time in Tuscany. A group of us arrived five minutes before the timed slot that some of my colleagues had booked. Despite my warnings that no bags were allowed in the tower they had still brought them with them and as there was no time to deposit them in the left luggage I became their custodian – the bag and hat lady of Pisa. 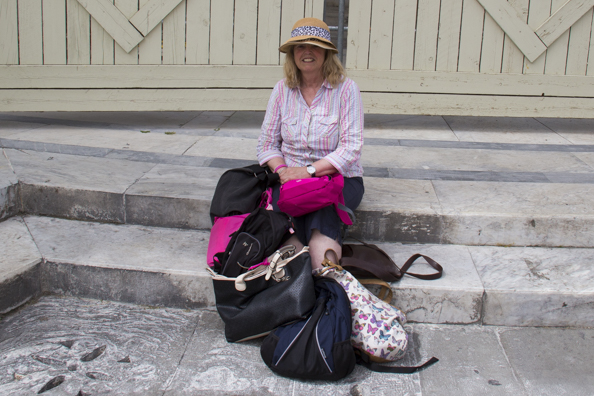